We had just one remaining big Angus Glen hill to activate, and the forecast was for a dry but still windy day, so we wanted to do Ben Tirran / The Goet. This is another summit which has sporting activities, but we hadn’t found a gamekeeper contact to check if any were on that day. Then Martyn found a note to check with the Glen Clova Hotel: their reception confirmed that they did run sporting activities on the hills, but didn’t have any planned that day, and although they couldn’t be sure they weren’t aware of any other organised activities. So we were good to go.

We had a couple of possible routes and were aiming for the shorter route starting from NO352715, but when we got to the junction where the western and eastern legs of the B955 split, there was a road closed sign on the eastern leg. As we drove down the mostly not quite two cars wide western leg of the B955 we discussed whether to try getting to our intended starting point from the other side or do the longer walk starting from Clova village. The combination of the longer walk looking more interesting, and the certainty of a car park in Clova made the decision for us. Approaching Clova we turned left down the road to the car park, which had the slightly alarming sign “Single Track Road: NO passing places for 3 miles”! Thankfully we only had to travel a few yards to reach the car park.

The well-defined path set off through woodland before ascending onto the open hillside with views opening up both up and down Glen Clova, getting increasingly windy as we passed the impressive Corrie of Clova ascending towards Loch Brandy. This was the busiest walk of the week with several other parties on the hill. It took a while for Loch Brandy to come into view, but it was worth the wait: a blue loch surrounded by impressive set of cliffs. Crossing the path that ran along the front of the loch we found some relief from the wind to stop and apply extra clothes. Here we had the option of climbing up The Snub and along the top of the cliff or heading to the east of the loch to ascend Green Hill more directly. The Snub might have been more scenic but was going to be more exposed, so we took the well-defined path up Broom Shank to the summit of Green Hill, marked by a small cairn. We stopped briefly to take in the extensive views before heading on less well-defined paths heading east towards White Hill and then south east passing a boggy area before the final gentle ascent to The Goet. 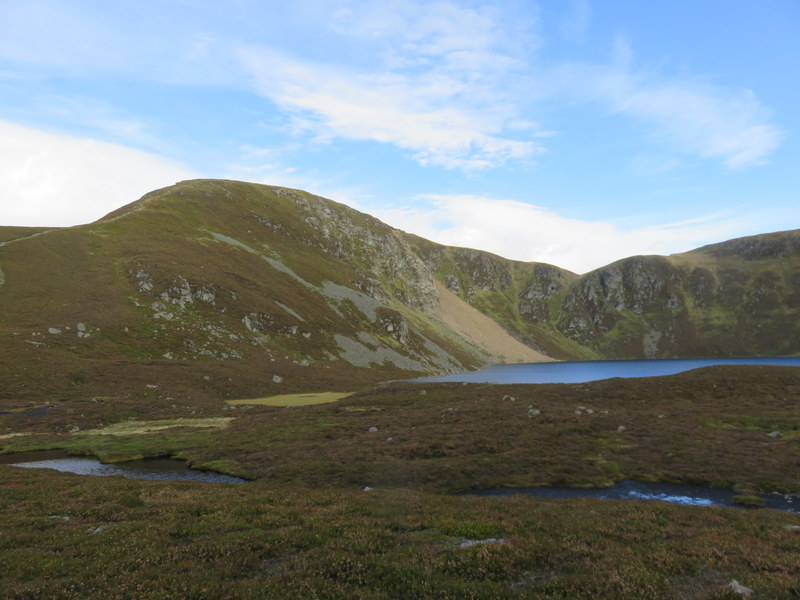 The summit has a small low shelter surrounding the trig point. It didn’t offer much protection from the wind, but it was all that there was, and the groups of walkers seen earlier had disappeared, so we made our base by the trig point. The trig point had a suitable hole for Caroline’s VHF antenna and Martyn set up on the flattish ground nearby. 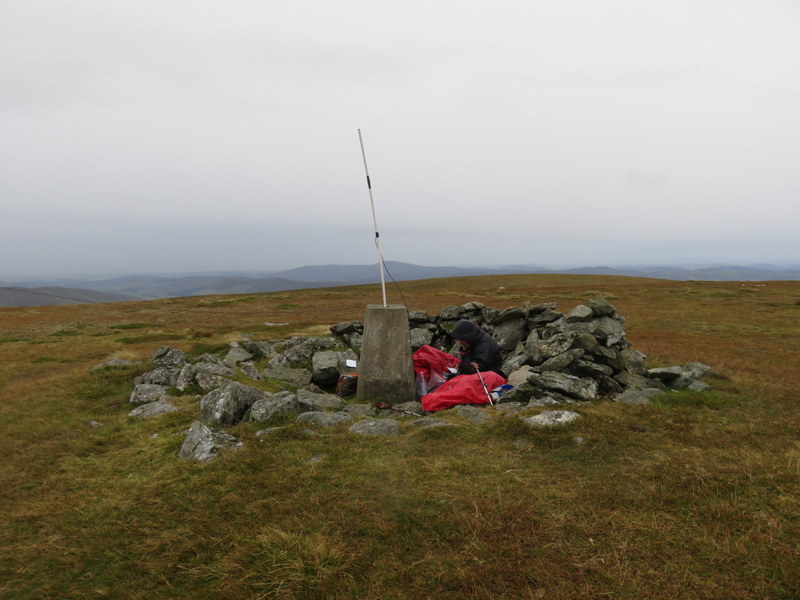 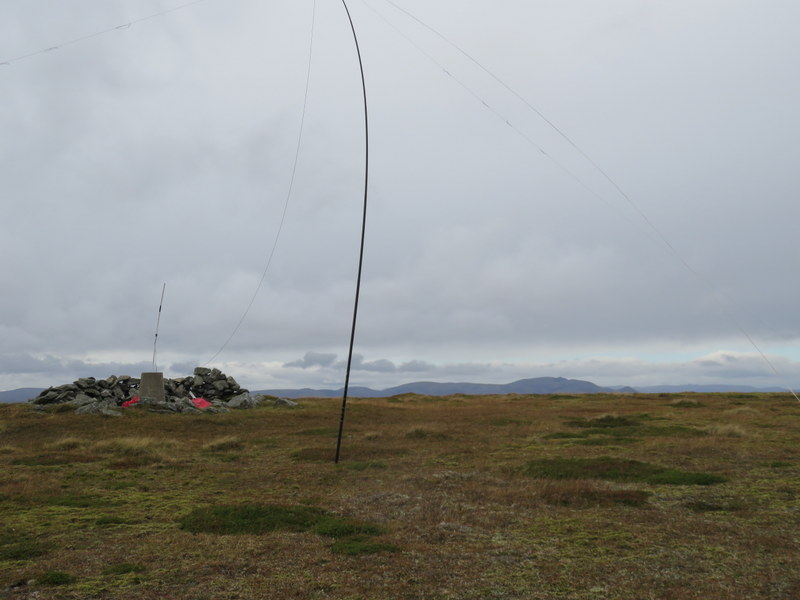 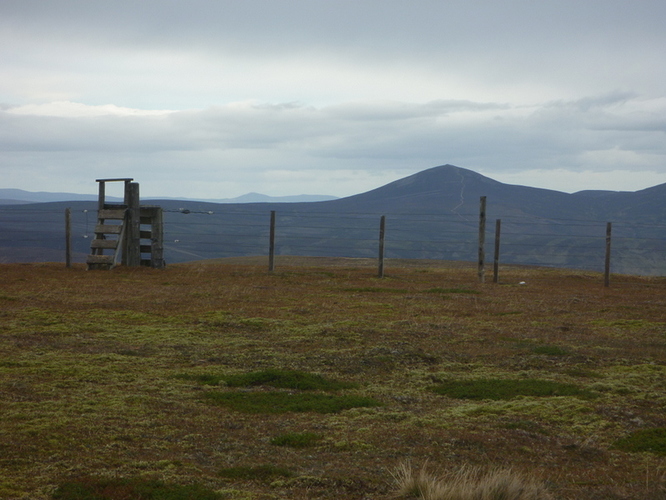 Caroline put her log sheet and pencil down on top of the trig point while assembling the antenna, only to see the wind take the pencil and roll it across the trig point and down into the hole: quite how the pencil managed to roll horizontally and then fall vertically down the hole wasn’t clear, but it was gone never to be seen again. Before getting out a spare pencil Caroline made sure the antenna was in the hole to prevent a recurrence! Once setup, she had a reasonable run of 7 contacts on 2m FM over half an hour, 3 of which Martyn grabbed as contingency contacts in case HF was broken. HF wasn’t broken, but also not good: 7 contacts for Martyn on 5MHz and 10 for Caroline on 7MHz. An unscheduled shower briefly disturbed an otherwise dry day, and we decided we didn’t have enough time to 80m.

We descended towards the spur of Ben Tirran before heading more west to pick up a faint path descending towards the outlet of Loch Wharral. Once out of the wind we found a rock overlooking the loch and with good views down Glen Clova where we paused to sit and eat our afternoon apples. We then picked up a wider estate track running down from the outlet of Loch Wharral. As we approached the Adielinn Plantation the tracks and paths were not as on the 1:25000 OS map, but we found a faint path running further away from the trees which got stronger as it descended though bracken before approaching the trees where it met the road. Once on the road we were glad we had parked in Clova village, and we couldn’t see where we could have parked near the access track. There was little traffic on the road since it was closed further down the glen, and it made a reasonable way back, with an off-road path appearing as we approached the village. 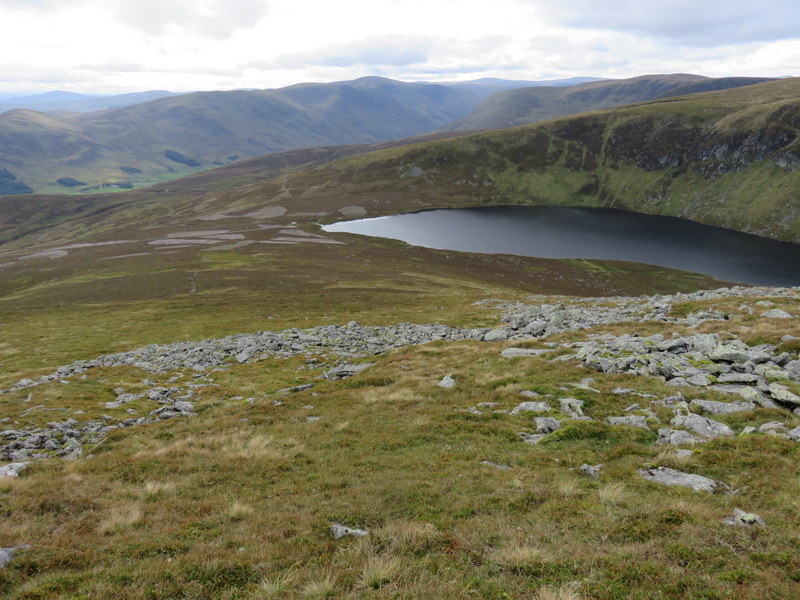 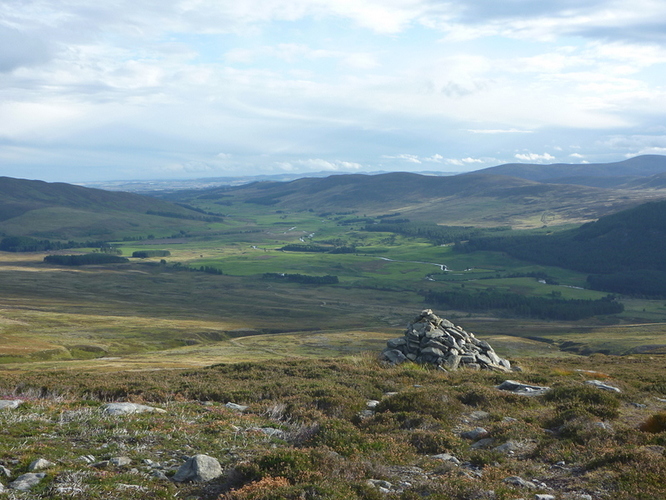 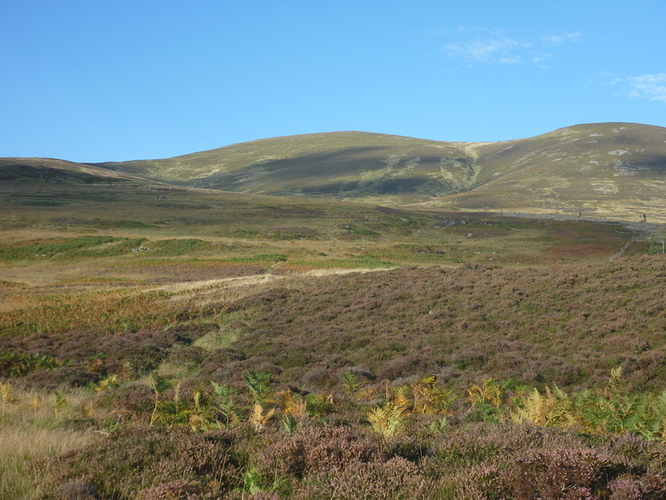 It was a pleasant walk, with the views on the longer route via Loch Brandy was well worth the extra effort. We also saw some mountain hares: one on the way up, one on the way down and one on the road as we drove back along Glen Clova. The hare on the road sensibly hopped out of the way, unlike the many young pheasants who seem to like walking on the roads in the late afternoon. The pheasants seemed to be as likely to fly/walk towards the car as they were to fly away and there were some that hadn’t made it squashed on the road: stupid birds!

We were back at the car later than we had planned. We wanted to get Fish and Chips from the Tuck Inn in Edzell, but we had heard it closed at 8pm, but we were there in plenty of time. The take away is down an alley next to the café and was doing a good trade. We took our order of two fish and one large chips between us back to the cottage: the fish was enormous and we struggled to get through all the chips, but it was good.

Just to finish off the report, we had considered an activation of Largo Law on 15th September, but the combination of a calculation that we didn’t really have time and the weather being worse than forecast means it is still the last of the Fife hills we need to activate.

On the 16th we wanted to get a final summit in on our way home, but a band of heavy rain was running across the country at about the same rate as us. We hadn’t done The Cloud this year, so risked it despite light rain at the start. The rain turned heavier on the way up, with poor visibility, so we just did a VHF/UHF only activation - partly because of the rain and partly because the summit was busy despite the weather and we didn’t want people walking into the HF antenna. As we were finishing the activation the clouds cleared giving the sort of views we expect from the Cloud. 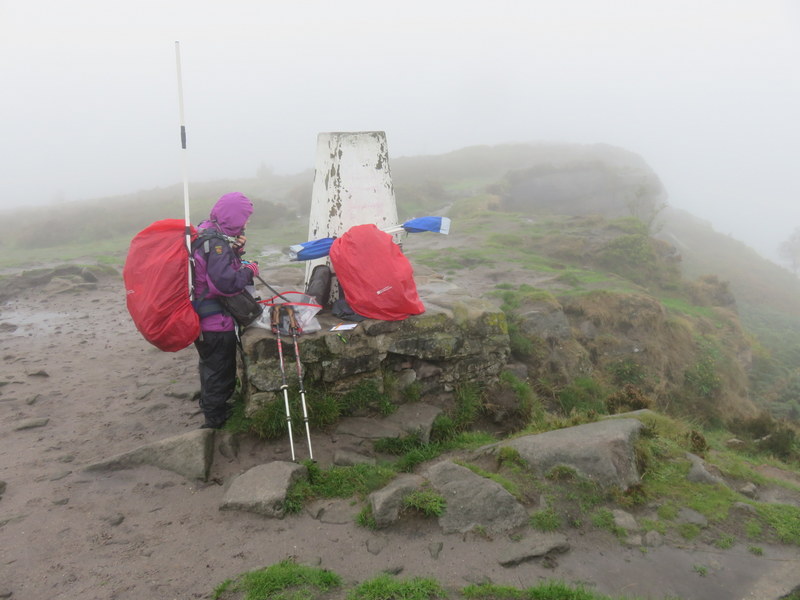 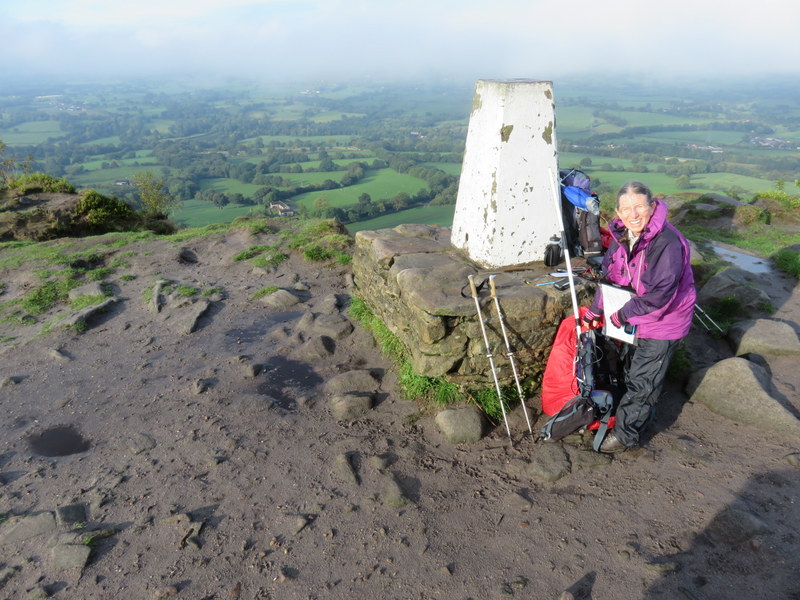