The forecast was for a generally sunny but windy day. The sun encouraged us to go for the only Munro of the week: the high winds might make HF impossible, but we didn’t anticipate having any problems qualifying the highest hill in the area on VHF. We drove all the way along the windy River North Esk valley to the car park just before the end of the road at Invermark.

The motorway of a path that goes up Mount Keen is documented as having no restrictions for stalking or grouse shooting and is visible from miles away. The long flattish walk in along Glen Mark, starts with a path through pleasant woodland before opening out into the wider glen. Once out of the trees we were hit by the winds funneling down the glen, but the skies were a mix of bright blue and fluffy clouds. The path joined an estate track coming in the other side of the Water of Mark, where we passed an estate vehicle with occupants who were surveying the hills on the other side of the glen with binoculars. After a couple of miles, the landmark of Queen’s Well came into view and beyond that the final house in the glen at Glenmark and the start of the ascent up the valley of the Ladder Burn. 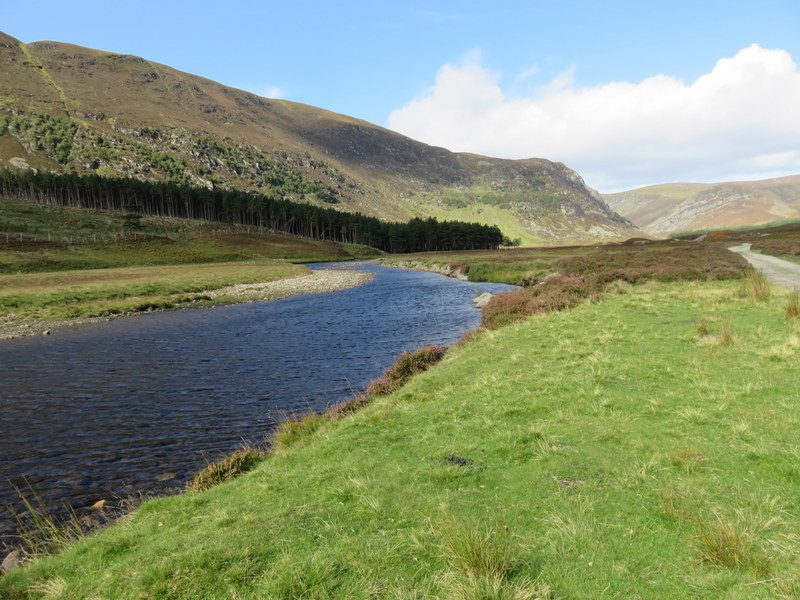 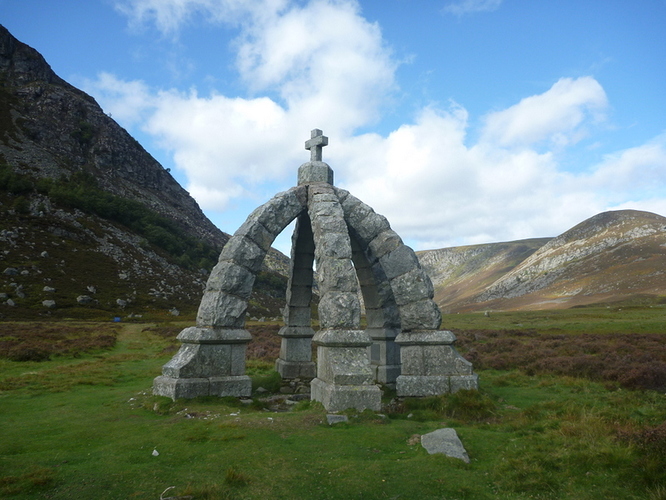 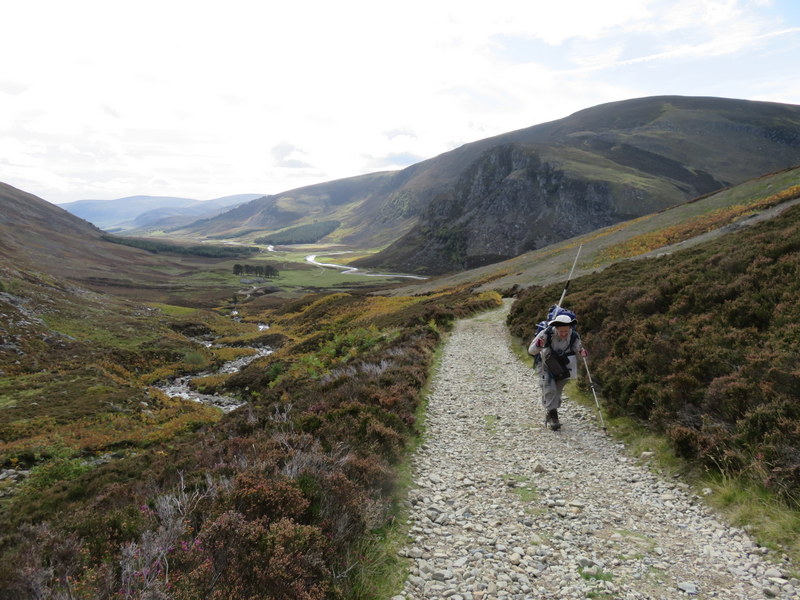 The climb up the edge of the Ladder Burn valley gave some relief from the wind, but it hit us again as we emerged onto the spur at the top of the zigzag. We continued our way up, passing a group of people working on maintaining the path: heroic given the conditions. When not fighting the wind, we could take in the extensive views.

It was very windy at the summit: we struggled to get to the trig point to take some photos of the wide views before trying to find some shelter to set up our stations. The north east side of the summit seemed the least windy. Caroline could not get the VHF station as high as she wanted, and the combination of the high winds and the fact that on previous hills she had become very suspicious of the VHF dipole, which was showing intermittent high SWR meant that she decided to use the end-fed half wave on an extension pole which has less wind resistance. However, the wind still managed to break one of the pole sections: some repair tape was applied but it was still fragile, and Caroline ended up having to try to operate and stop it collapsing at the same time. Perhaps it was the sub-optimal position, but Caroline struggled to get VHF contacts despite the high hill and managed just 2 in her first attempt, including David GM0EVV descending from his Mountain Goat activation of Ben Macdui, which must surely have been even windier than Mount Keen. 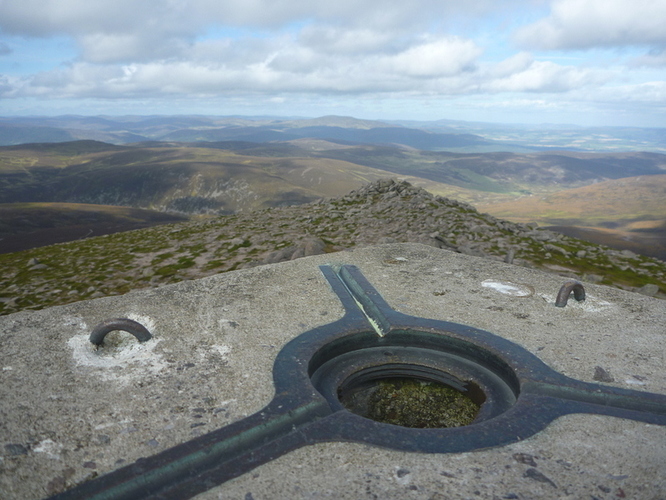 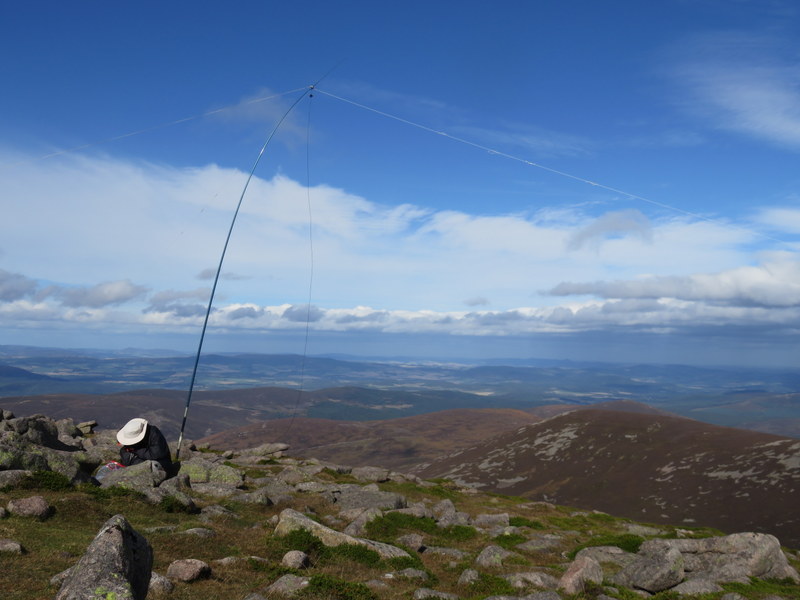 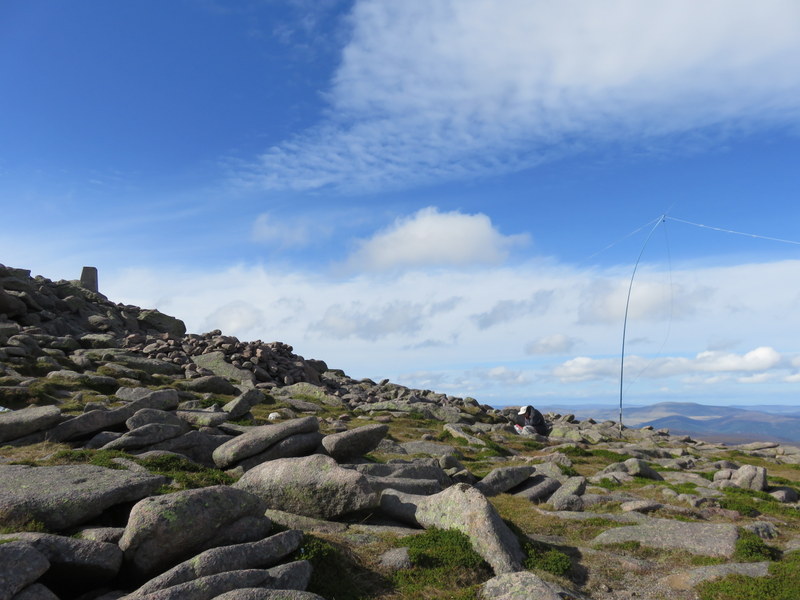 Martyn somehow managed to get the HF antenna up and stable, and amazingly it survived the whole activation unharmed, though somehow Martyn ended up with a bloodied knee. After he had scraped 4 contacts on 60m, Caroline needed 40m to qualify the hill, which it obliged with 13 contacts. A return to VHF got Caroline one more contact, while Martyn managed just two on 20m. It had become noticeable windier during the activation and we initially assumed the wind direction had changed: it was only when we tried to venture closer to the trig point to take more photos that we realised it had just got even stronger, being difficult to stand.

We had to deal with the full force of the wind as we set off back down the path: mostly a cross-wind but sometimes head on, which made which should have been a relatively easy walk hard work. Part way down on an exposed section the combination of wind and rough path sent Caroline flying ending up with a bloodied forehead to go with Martyn’s knee: thankfully neither injury was serious and once back down in Glen Mark the wind was mostly behind us. 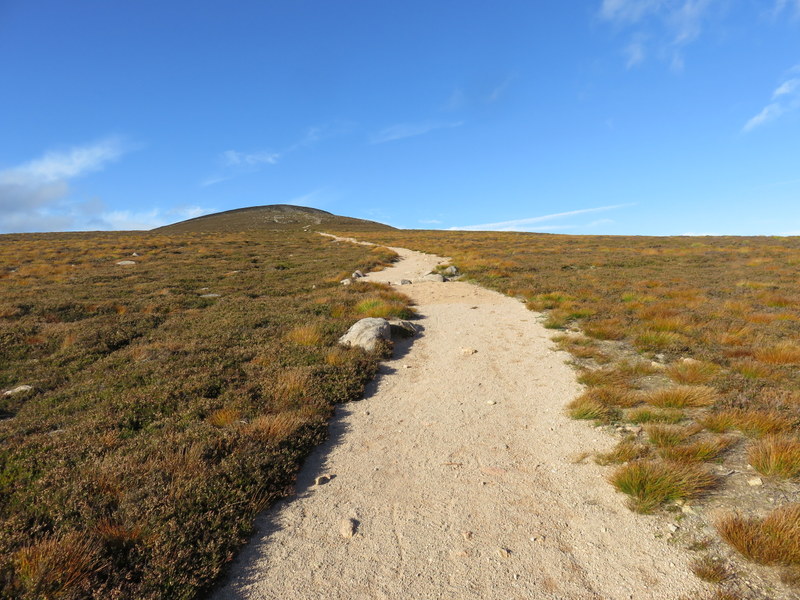 Relieved to read your injuries were not serious.
Must have been a really terrible wind.
Bravo both of you for succeeding!

That piece of track in the final photo seemed to be endless when I did this. I felt like I had been walking all day along the flat river valley section. Then you climb up the zig-zaggy bit and finally get here with the target in view. No matter how hard I tried the target never seemed to get any closer! Well it did eventually but only after what seemed like a lifetime.

It’s a nice walk as long as it’s not mad busy with baggers.

The Yellow Brick Road! My XYL & I had a day off work yesterday, weather was really poor further west so we decided to visit Mt Keen. Windy for us also, gusting 55 Mph on top but we mostly dodged the rain. Like you pair, we struggled to get to the trig point! Quick activation with 25 Qso’s on cw, not a day for dwelling on summit. We cycled up to Glen Mark cottage which speeds things up, then had a cycle up the side of Loch Lee on way back.

Think this summit always seems to be windy and very busy.

Think this summit always seems to be windy and very busy.

For a Munro with a good path it wasn’t busy when we were there. I think we only saw a couple of other pairs of walkers on the hill and one person visited the summit while we were activating. The biggest group we saw were the people working on the path. Maybe the wind put them off.

We cycled up to Glen Mark cottage which speeds things up, then had a cycle up the side of Loch Lee on way back.

A bike would certainly help for both Mount Keen and Hunt Hill (which we did the following day - report in preparation). We haven’t organised bikes for holidays - I don’t think our commuter bikes would do in that terrain!

Yes, we can recommend Birch Cottage in Edzell as a base for exploring the eastern Angus Glens. We didn’t have enough time to explore the village fully, but got enormous good fish and chips from the takeaway at the back of “The Tuck Inn” on our final day.