With my XYL away and our dogs to look after, I could only manage an afternoon on this 4 pointer overlooking Braemar. I’d planned to go up it a week or so ago, but wimped out due to rain. No rain this time, very little wind with sadly no sun, but 2 out of 3 ain’t bad.
I parked up in Braemar Duck Pond car park at 1230 local, which was just about empty and headed up the track. A signposted single track then heads uphill.
Route up 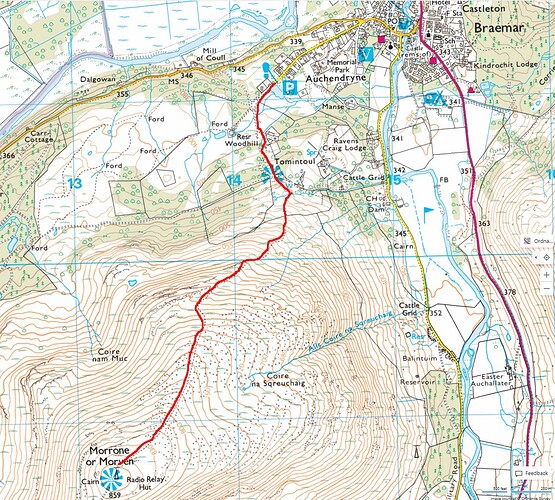 Signpost at the start 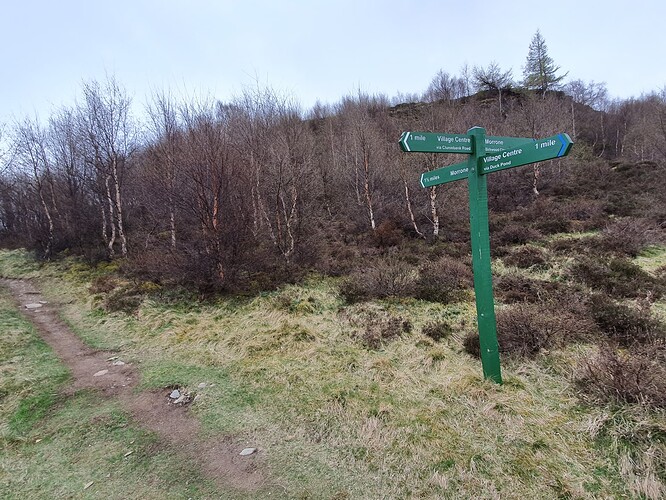 The track is very clear and for the most part well-maintained. About 2/3 of the way up, 5 cairns have been built: River Dee in the background 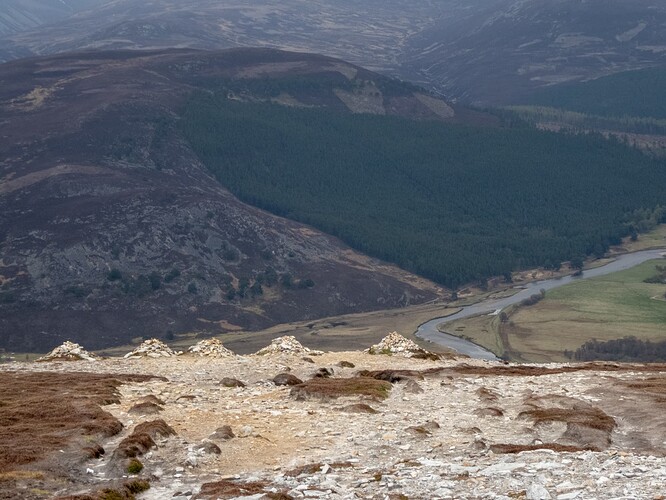 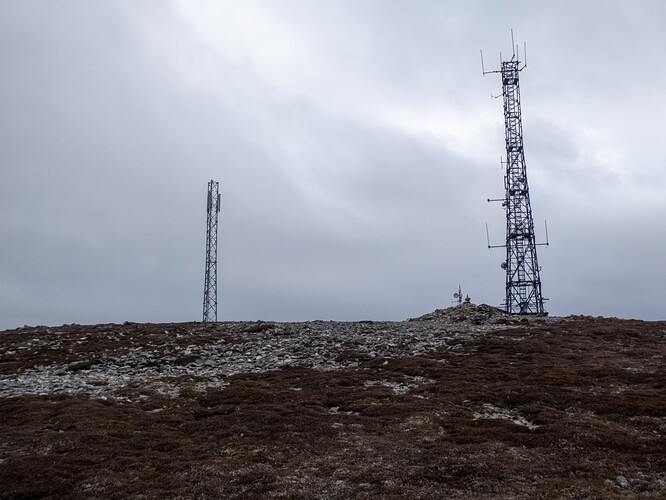 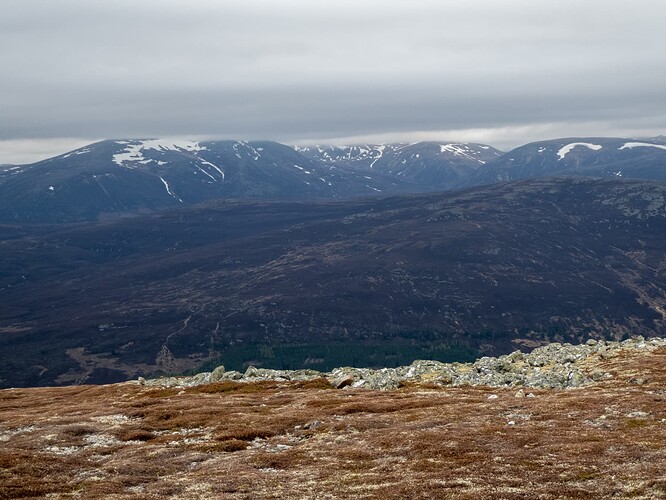 Activation
With the SFI having dropped to just above 100 and the sun producing a lot of flares lately, I wasn’t sure what shape the bands would be in.
I spent the first 30 minutes on 40m with strong signals from UK, including regular 59s from GM which is not always the case. EU tended to be a lot weaker, although Chris F4WBN was his standard 59. I could only just copy Manuel EA2DT. Lars SA4BLM and Jak OH3GZ also made the log, together with 2 S2S with GW0WPO/P and GM6PJZ/P.
20m was very quiet and a spot brought just 6 chasers, with Dinos SV3IEG being furthest distance.
I took a look at 10m and heard ZS1UOK at 59 working a string of UK stations, but a spot and 5 minutes of CQs brought no activity.
A senior moment.
I then set up on 2m for a schedule with Fraser MM0EFI/M to give him a Complete. When he called in though, I could barely copy him - " Terrible audio Fraser, I can barely understand you…" Then the penny dropped - I was still in USB mode. What a plonker! Switching to FM we quickly exchanged reports with my ears rather red. After Fraser went QRT I heard GM4OAS call me but after a QSY we lost each other, so I never got my report from him. Too much faffing around on my part, I’m afraid - sorry Gordon.
Going back to 20m, it seemed a bit livelier and I was very pleased to be called by JW9DSA from the team in Svalbard. OH3GZ then called in, followed much to my surprise by NW7E in Oregon who was easily furthest DX of the day and who I last contacted nearly 2 years ago. I didn’t hear any more US stations though and after a QSO with SV1RVJ I switched to 17m.
This produced an interesting mix: K2CZH, DJ5AV,VE9GWM, 7X2ET, KD2VJD, YO6FFB and EA3EVL. Things then went quiet and my battery started to show signs of weariness.
15m was open and a spot brought AE4FZ but no-one else.
Moving back to 20m, the band seemed to be now just open to EU and a spot brought a respectable run of 23 without too many CQs on my part. This included a S2S with Leszek and Wioletta, OK/SQ9MDF/P and OK/SQ9NOT/P.
Having to get home to our dogs, I packed up at 1700 local and headed down. On the way I met a chap walking up, who immediately asked if I was doing SOTA. He said he had a mate called Gerald in North Wales who did it, which is why he was aware. Could his mate be MW0MWL? The guy didn’t give me his name, but he was late 30s-early 40s, stocky, crew-cut and had a North of England accent. Over to you Gerald…
Further down I met a couple on holiday from Devon, who were most impressed that I had managed to contact Oregon. “Without relays? Wow!”
Looking down on Braemar on the way down 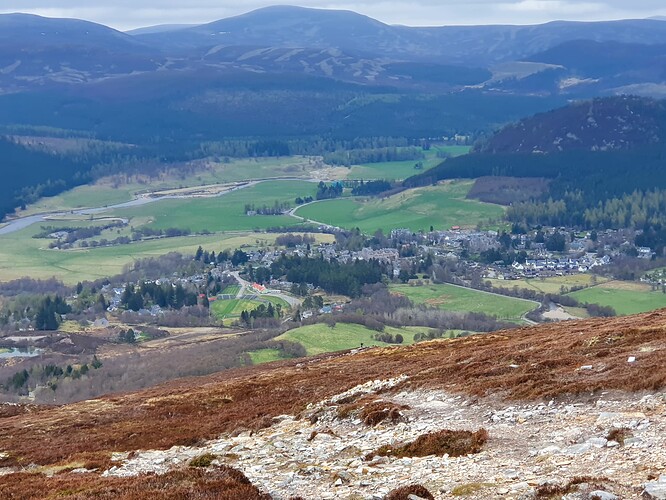 67 QSOs for the day, including 4 S2S. Thanks to all as usual.
PS For the dog lovers reading this, I did not leave them for 7 hours - they were walked (and fed) while I was up the hill

PPS Unfortunately I now have a sore knee, so may have to wait a bit until the next hill, where I hope to try a new 2m yagi that is arriving this week.

I could only just copy Manuel EA2DT

Yes, I’ve noticed Manuel has been a lot weaker than usual the last few times. Propagation or an equipment change? There seems to be something distinctive about his voice or call sign though, as he still gets through!

Good to work you Simon, thanks for the S2S.

Its the way he says “Delta Tango” - instantly recognisable for me

Well done on the activation Simon.

I was still in USB mode

At least I know:

a) I can drive 500m and chase The Cairngorms on 2m FM from my Land Rover.

b) What SSB sounds like on an FM radio

Sorry to hear about your knee. I was going to ask if you could activate Mount Battock GM/ES-032 next…

Its the way he says “Delta Tango”

He also has a distinctive rhythm on CW.

I am very pleased to have worked you on this one Simon. Not only do I have a potential winter bonus summit, but now a potential Complete.

Good work, Simon. A previous ascent of Morrone was in pre-SOTA days some years ago and just happened to be on the September day of the famous “Braemar Gathering” Highland games. Had I been operating SOTA there at the time, the QRM from hundreds of bagpipes in the distance below might have presented an unusual challenge! Great sound though