Back in 2008 I was still quite new to SOTA and had been activating summits for just over a year. Every summit was unique and I was still refining the kit I carried. During those first few years the only objective was to climb, activate and qualify a summit. It was not that important where it was. In many ways the summit itself was immaterial and the weather just a bit of an inconvenience. It is always enjoyable to activate when the weather is good and compliant, warm sunshine and no wind, but that is actually not often the case.

In these early years, I would deliberately go out on the mountains when the weather was poor, really not recommended unless you are an experienced fell walker. The first time I climbed Glyder Fawr (GW/NW-003) was In December 2008. No need to go into details my report is here;

It has been a few weeks since my last activation, Drosgol (GW/MW-008). That time a bumped knee meant I finished the walk in agony which had restricted my excursions for a short while. Feeling recovered I thought a “gentle” stroll up a mountain would be ok :o) I arrived at the home of my walking companion at 6am and were heading our way up the A5 by 6.30. As we got closer to the mountains they looked stunning in their white winter overcoats and I wondered if conditions were going to prevent us …

Glyder Fawr has been on my list of “must climb again when I can see where I’m going” for ages. For one reason or another it kept being over-looked. It was originally penned in for my Goat-day.

The weather forecast promised possibly the last weekend’s sunshine before the autumn season takes hold in the UK and I’ve not been on one of the Welsh biggies for quite a while so it was a good opportunity. I have been building my fell walking fitness back up recently as I had let it drift after a period of only doing relatively easy summits. So much so that at the beginning of the year I struggled on a couple of medium south Wales hills.

My initial thought was to retrace my original route from Pen y Pass and try to recreate some of the pictures I took in winter. Pen-y Pass is the easiest starting point for the assent but you have to get there very early to find somewhere to park as it is the starting point for Snowdon climbs as well. Alternative routes, which came from the north of Glyder Fawr, were researched as possibly quieter walks. I was aware that a couple of the routes involved some scrambling so they were immediately discarded. Helen is not comfortable on scrambles, scree is just about acceptable. This really left only one path from Ogwen Cottage, up the unnerving sounding Devil’s kitchen route and then Glyder Fawr’s infamous scree field. We could have returned the same way as a bail-out but there is another path back and that is via another SOTA, Y Garn (GW/NW-004). 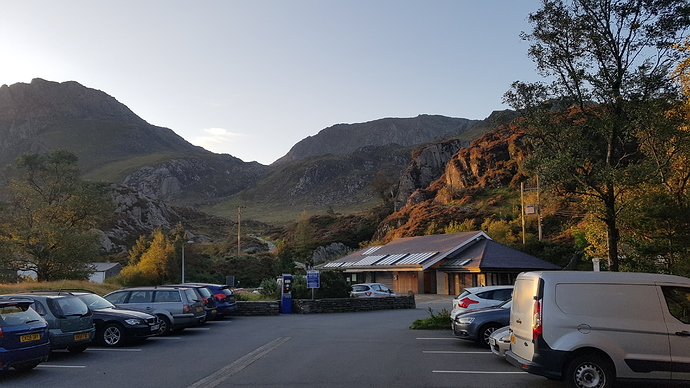 We arrived at the parking at Ogwen Cottage as the early sunshine was streaming along the Llyn Ogwen valley. The morning air was beginning to get warm but tempered by the wind which was already quite strong down in the valley. The beginning of the climb is a gentle walk on a well-made path to the shore of Llyn Ldwal. Here there is a choice of paths round the lake. We chose to go to the right over the bridge for no other reason than there were geocaches on route. Soon we were at the bolder field below the Devil’s Kitchen. It quickly became apparent there was an easily followed path of steep steps working its way up with no really awkward bits. Eventually we popped out at a wall and then the relatively gentle walk to Llyn y Cwn. 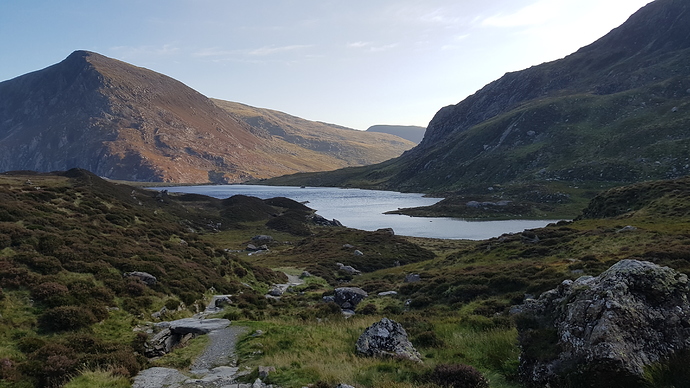 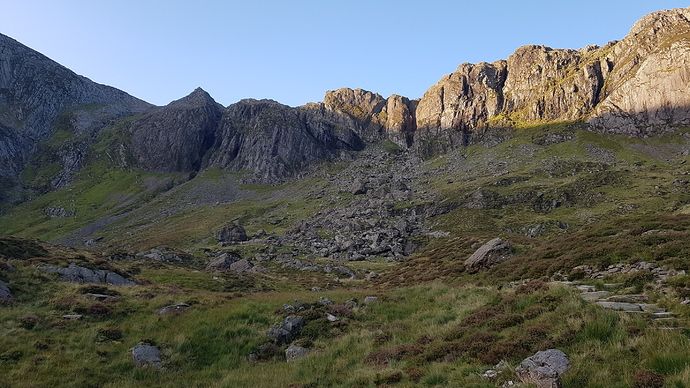 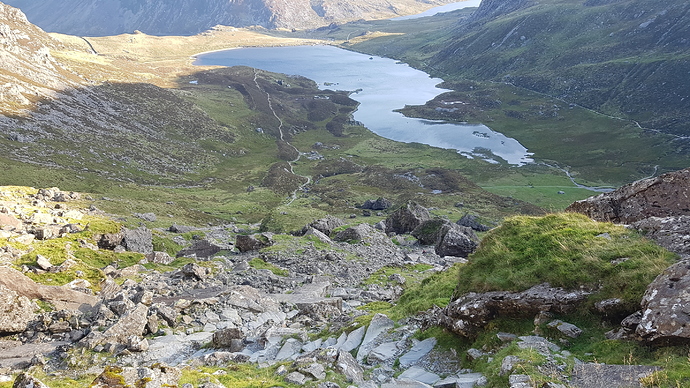 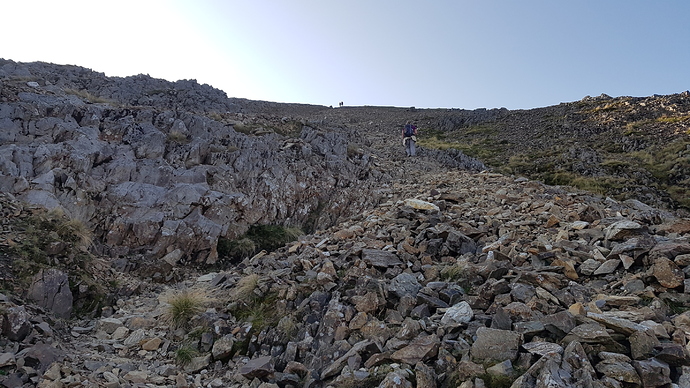 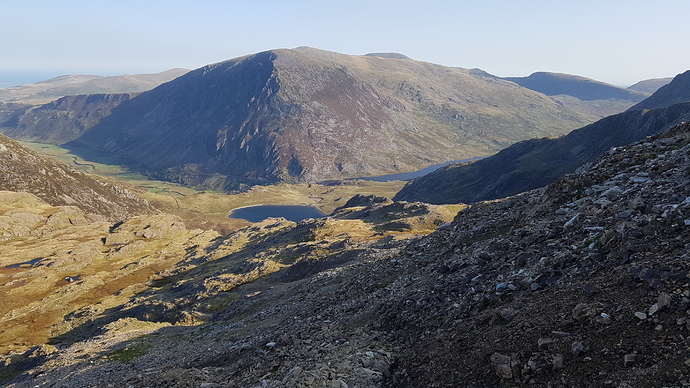 Looking across to Carnedd Dafydd, down on Llyn Idwal and Llyn Ogwen

All we had left to do was the 280m of assent up very steep scree and finally boulders to reach the 1001m summit of Glyder Fawr. It was now the time to get the head down and plod. I was envious of the younger, fitter people carrying light packs passing me. We had been protected from the strong wind for most of the climb but as we topped out, about 3 hours from starting, it became apparent that without protection the activation was going to be uncomfortable. The direction of the wind coming from the south meant there was no leeward side to shelter in and any antennas were going to be battered. First thing Helen did was find the summit geocache.

The vertical antennas was guyed to the rocky summit and I started on 40m, quickly qualifying. The band was not in the best condition and soon the calls stopped. I reconfigured the antenna for 20m for Helen to activate the summit for her first time. I finished off our time on the top by a run of contacts on my 2m hand-held before we moved on to Y Garn. 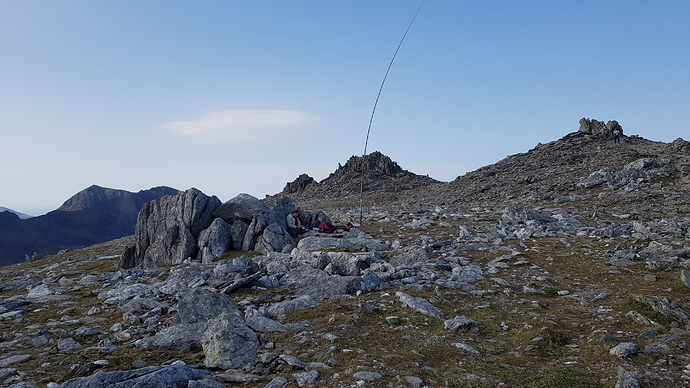 The main reason for climbing Glyder Fawr was to see the views from the summit. It was not disappointing. From here it is possible to see the summits of all the other mountains in the area including the Snowdon Horseshoe with the imposing Crib Goch. I feel it, perhaps, has the best vantage point in all Snowdonia. 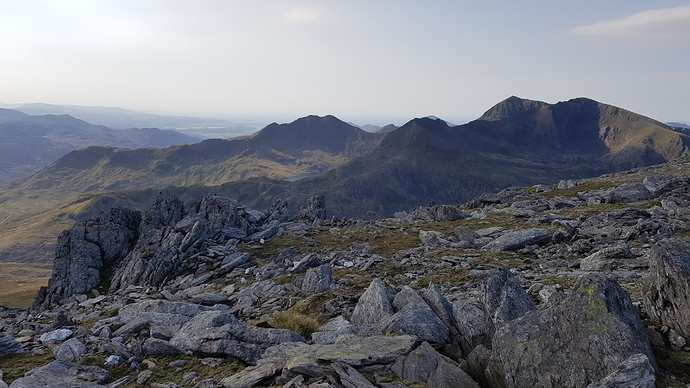 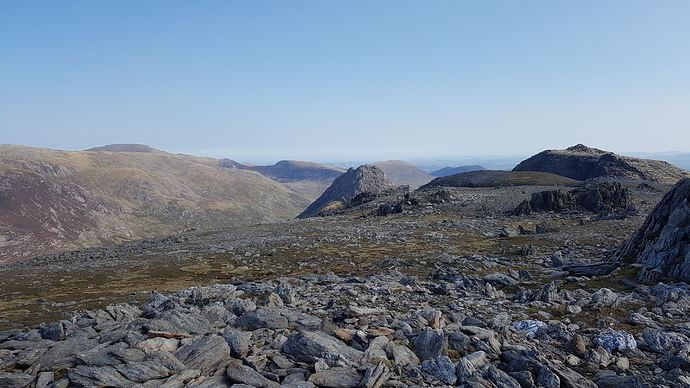 Time to leave and work our way back down the loose scree, trying to pick a reasonable path, which Helen found really unpleasant. Soon we were back at Llyn y Cwn looking up at Y Garn. It would not have been a difficult decent via the Devil’s Kitchen using my logic of if I can get up it I can get down it. But the second summit was so appealing. Part way up we stopped for lunch and looked back at Glyder Fawr and the horrible scree we had climbed up and down. Again it was head-down for another plod to the top of Y Garn. The climb up Y Garn is far easier than Glyder Fawr so progress was closer to my usual pace. As we peaked the wind was even fiercer than on the previous summit and this time I thought we would just do a quick VHF Hand-held activation. I know, not my usual modus operandi. 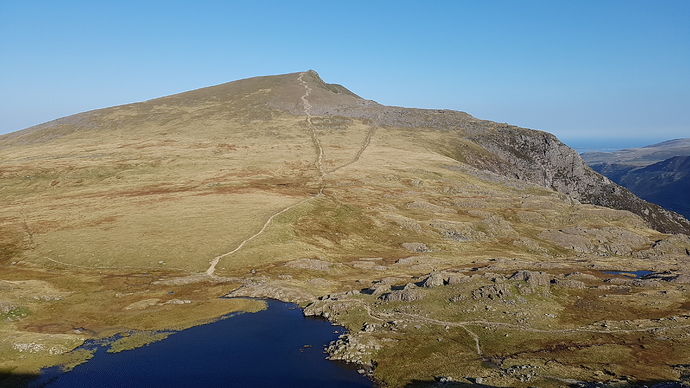 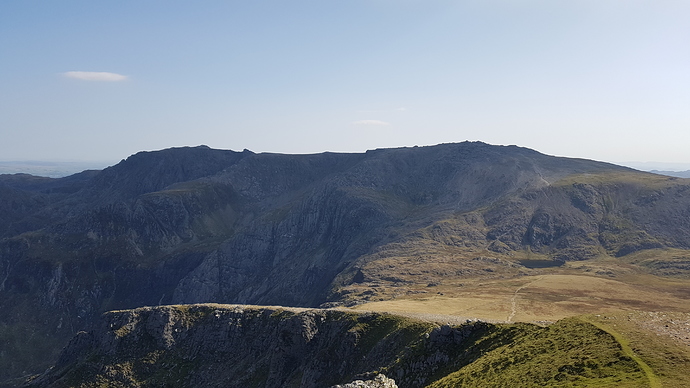 Decent of Y Garn is via the NE ridge above Cwm Clyd. This is a well walked trail steeply dropping down the 500m towards Llyn Idwal. My tired legs were not enjoying the steps down the steeper sections but for once my knees were not complaining. Given a choice I would have preferred to climb down the shorter section of Devil’s Kitchen than the steep walk down the NW ridge. 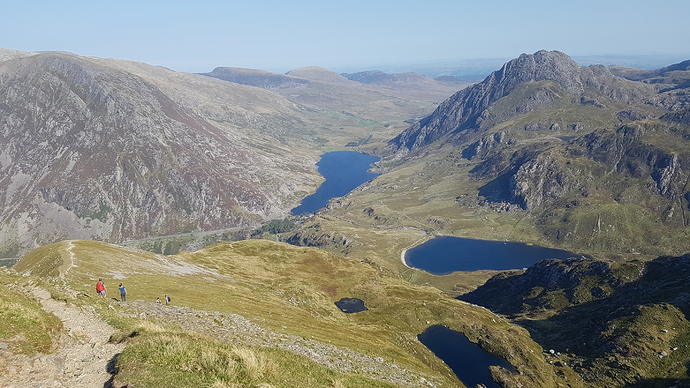 The warm weekend had brought out crowds of visitors to Llyn Idwal. The beach was full with some in the water. Such a distinction from the quiet early morning where the few people wild-camping were just waking to the sea-side atmosphere of the afternoon was stark.

Now at the end of a very enjoyable day out in the mountains, we could reflect on how they change their character, from summer to winter, and how the challenges are so different between being unable to see the terrain ahead and able to plan a route from afar. I hope I can find time to visit Glyder Fawr again.