Two out of Three ain’t Bad

Background
We’re on holiday this week. We always go to the Isle of Mull Friday, Saturday and Sunday for the Mull Rally (that’s closed road car rally, not radio rally). Mo booked us into the rather decent Nevis Bank Hotel in Fort William for the first part of the week, the aim being some Munros for Mo and some SOTA for me, ideally on the same hill at the same time!

Monday 4th October Big plans. Thwarted by heavy continuous rain. When staying in Fort William, one always needs a Plan ‘B’. Often that’s the pub, but for us this time it would be Upper Glen Nevis and Steall Falls. A magic place. 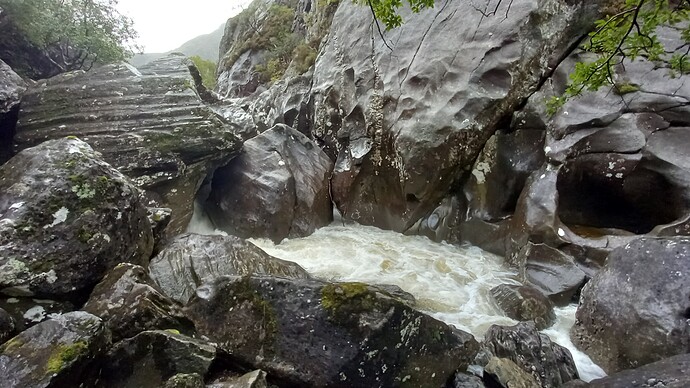 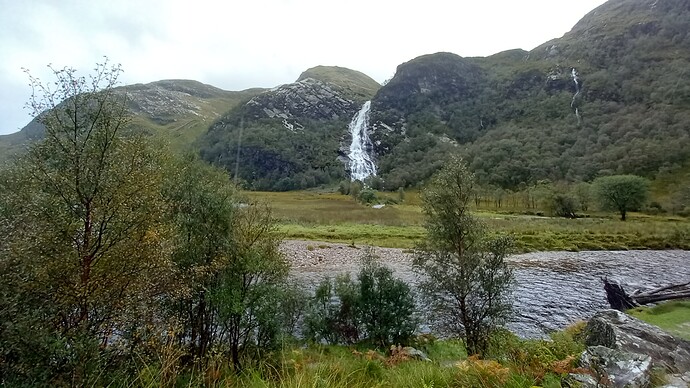 Tuesday 5th October Buachaille Etive Beag GM/WS-079 & GM/WS-096
Mondays planned walk re-scheduled for Tuesday. It was to be a fine day, according to the forecast, but with strengthening Northerlies in the afternoon and summit temperatures of 2 degrees C.

It was a 30 minute drive to our parking spot in Glen Coe. The path to Buachaille Etive Mors’ two tops initially follows a line through a glen but soon climbs directly to a bealach at 750m. It is well constructed and well-drained. We left the car at 0825z. 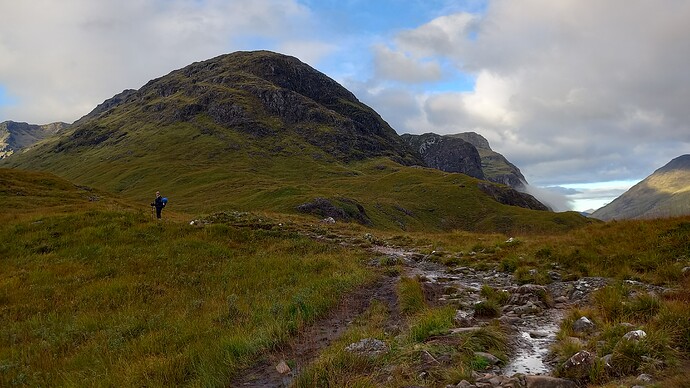 On arriving at the bealach, we turned right towards Stob Dubh GM/WS-079, some 1500m along the ridge, one which became more interesting and narrow as we went along it. 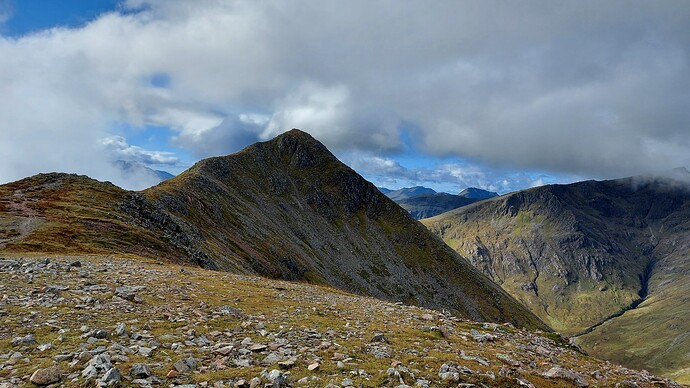 We arrived at the summit at 1025z having take two hours. It’s a double summit, with both tops appearing to be the same height. I spotted a spot for the mast in the shallow depression between them. I set the mast up along the direction of the narrow ridge, not really computing at the time that this was NE-SW. I usually try to go with E-W. I’d brought an inverted-V and end-fed W3EDP, choosing the latter as the end fed position allowed us to tuck in behind the summit rocks out of the wind.

Activating Stob Dubh GM/WS-079
Between 1040 and 1055 on 7.135MHz SSB, I worked 18 stations with decent band conditions and good reports all round. I then turned off the KX2 and picked up the handie, having screwed a telescopic whip to it first. Calling CQ on 2m FM brought in Robin @GM7PKT who was listening out for me. Despite the close proximity of his QTH there were still some rather large lumps of rock in the path but a bit of moving around on my part allowed us to have a chat. It was now 1105z and time to move on. On turning around to look at the mast, it was lying on its side. I reviewed the video to see that it fell over about 20 seconds after the final QSO!

I had allowed an hour for the walk back down to the bealach and up to the summit of Stob Coire Raineach GM/WS-096. 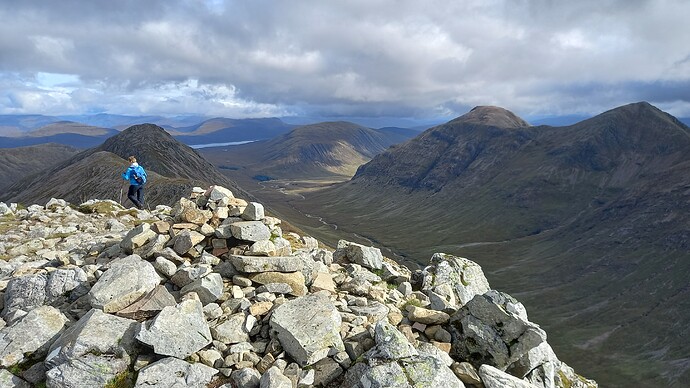 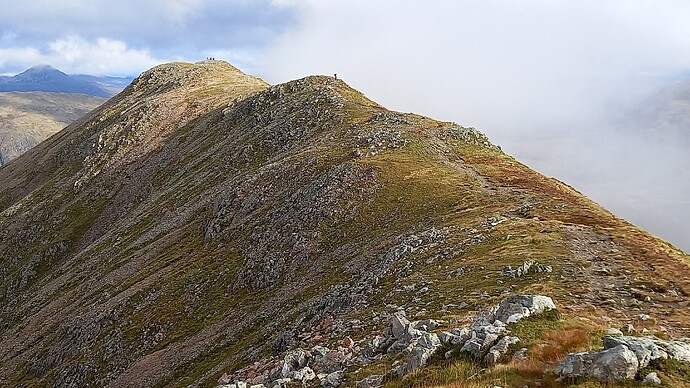 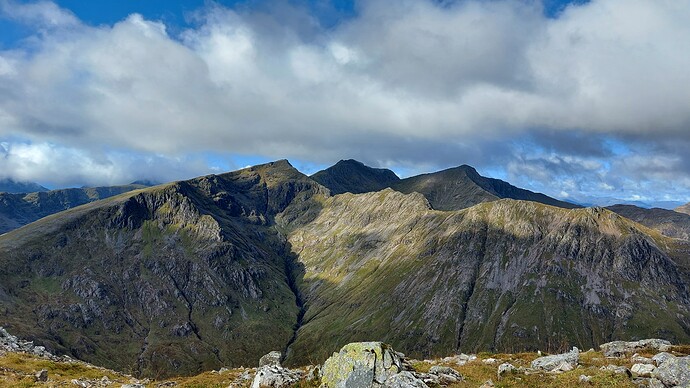 We actually arrived at Stob Coire Raineach at 1210z, having taken an hour. Unfortunately the views up Rannoch moor weren’t to be. There was a slight drizzle and corresponding haze. There was however, plenty of room around the summit area for a mountain radio station and I built mine just off the NW side.

Activating Stob Coire Raineach GM/WS-096
I’d already posted that it would be one HF band per summit, so it was to be 20m this time. I used the 40/20 in Inverted V because I could orientate it better in the space available. 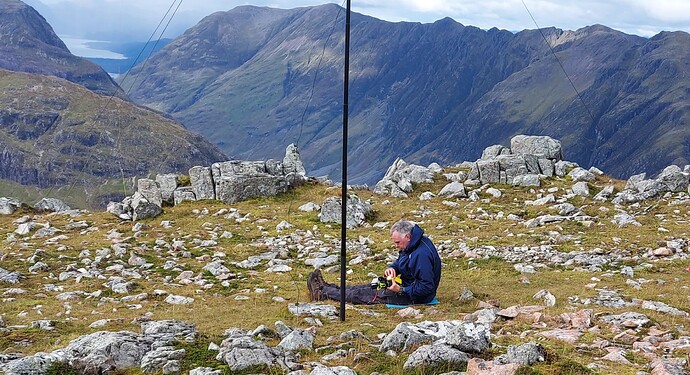 The 20m band wasn’t in as great condition as 40m, however I was able to work ten stations between 1253 and 1300, but not before I called Robin again on 2m, with just the whip this time and a better path.

It was a lot cooler now and the forecast wind was strengthening, so we packed up and headed back down, re-tracing our route of ascent and arriving back at the car park at 1425z, the whole episode having taken 6 hours, with 9km covered and 900m ascended. By the time we got back to Fort William it was tipping down with rain, none of it forecasted.

Wednesday 6th October
Mo was keen to climb Carn Mor Dearg GM/WS-003 and Ben Nevis GM/WS-001 and the interjoining arete (again). They would be new SOTA for me but I was reluctant due to the shortening days and the threat of some heavy rain due later in the day. The forecast was excellent until then, so we plumped for Aonach Mor and Aonach Beag GM/WS-002, via the Nevis ski range gondola.

Now I won’t go into any great detail here. This route was covered recently by John @G4YSS in his excellent report of his time on the mountain with @GM0GAV and @GM3YTS. However, as the chaps didn’t have the best of weather, I thought I’d show them what they could have seen! My activation follows this. 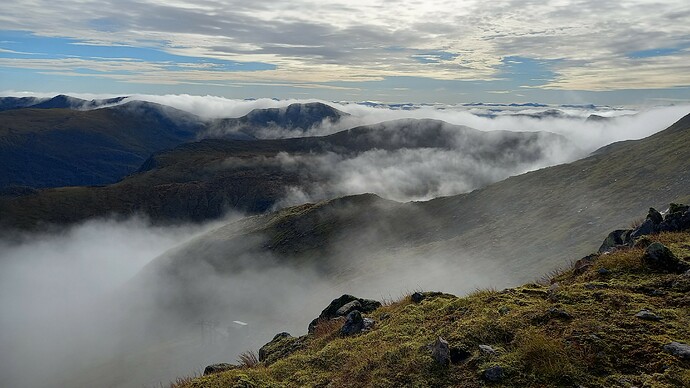 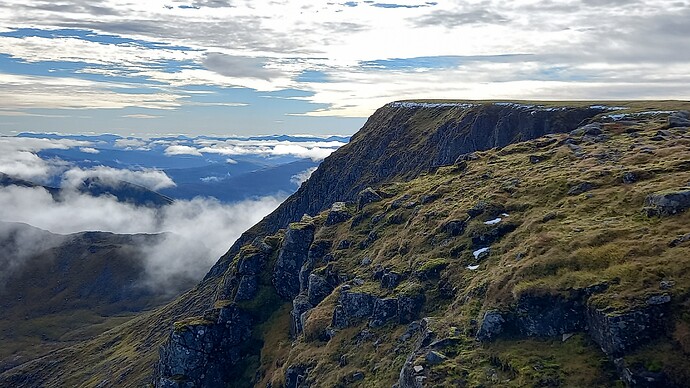 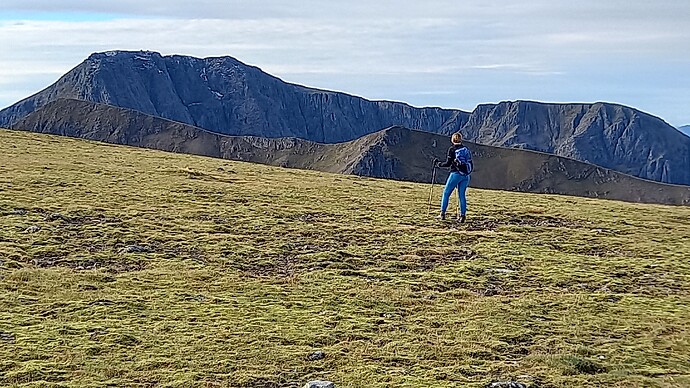 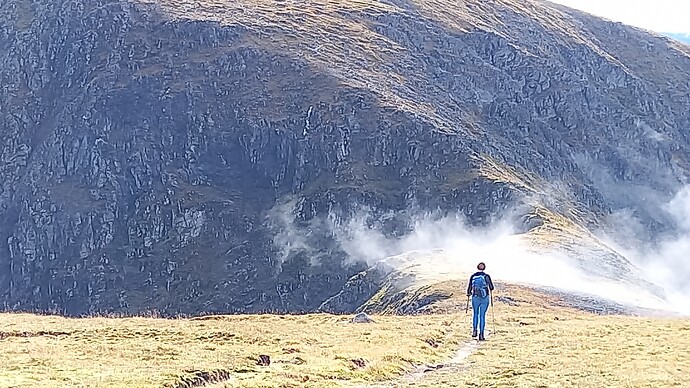 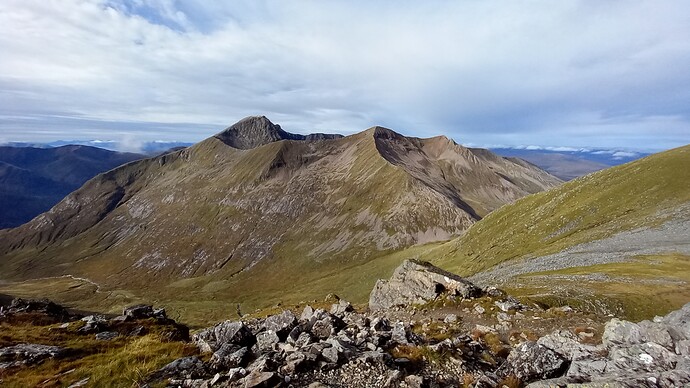 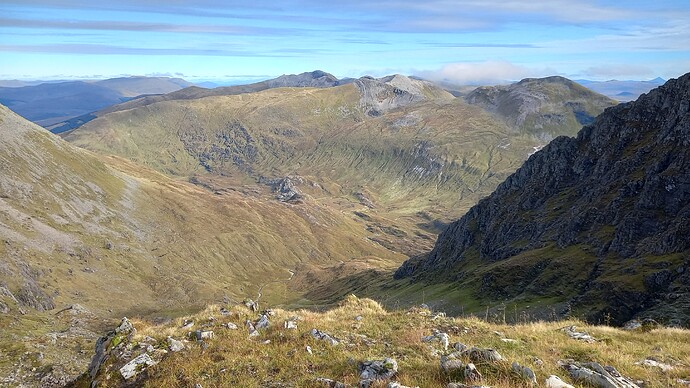 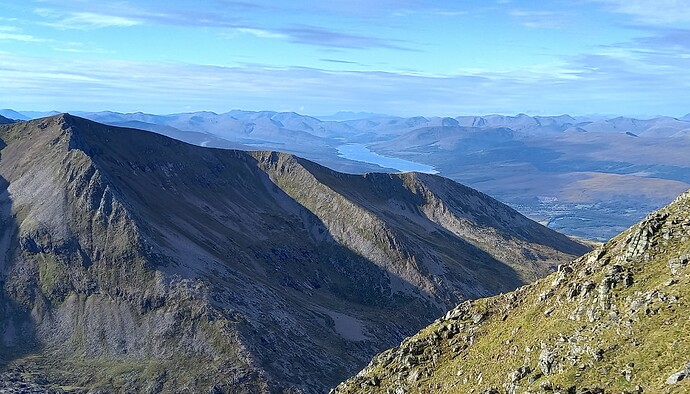 Activating Aonach Beag GM/WS-002
It had taken us just over two hours to reach the summit of Aonach Beag from the Gondola top station. The summit affords no shelter whatever, but thankfully conditions were calm and I was able to pick a grassy spot for the W3EDP wire aerial.
At 1135z OK8CX/P entered the log as the first 40m SSB contact and then things went a bit daft! In the following fifteen minutes a further twenty three entries were made, the pile up lasting until the last few QRZ calls. Lots of G stations I’d not worked from a summit before and remarkably, three GM’s, in Fife, Edinburgh and Annan. Fife being around 130km from my position. Exciting stuff and the short skip was commented on by a few guys. Reflector regulars @G4OIG, Gerald and @M0NOM/P, Mark made the log, Mark having nipped out in his lunch hour. Apologies if I didn’t cotton straight away Gerald, I was in full-flow and my summit brain was at capacity and beyond!

I turned the dial to 20m, hit “ATU” on the KX2 and gave a CQ call, not expecting too much, as 20m hasn’t always been the best for me this summer. Well, cue another pile-up! Eighteen stations this time, in about 13 minutes. Great to hear @EA2IF and to be given 5/9!

After all the excitement I nearly forgot about Robin. Thankfully 2m found a way down the hill to his QTH from my seated position using the HT. I was then really surprised that GM4GUF down in Biggar picked up the chat called me. So, two 2m contacts in the log to finish off an amazing hour on the radio(s).

It had got a bit chilly and I was encouraged (and even helped) to pack up by Mo. Thankfully the descent was fairly pleasant and we warmed back up on the climb back over Aonach Mor.

1415z saw us back at the Gondola top station enjoying tea and cake on the sun deck, the temperature having rocketed in the past hour. The heavy rain never did appear at 1600z, but that’s Fort William and Lochaber for you…

…Fraser I had summit brain and I was about 25m above Lake Windermere! Sorry for not picking up it was you Fraser, but hats donned respectfully to a great effort, and once again for taking the time to log it on the reflector.

Great photos which show what a magical place the Highlands are when conditions are good.

I did listen to one of your pile-ups but I tuned to somewhere else briefly and when I came back you had closed down. I must learn more patience for chasing.

Well that depends on your point of view. It is the higher of the two and thus “Mor”.
Well spotted, now corrected.

Sorry for not picking up it was you Fraser,

That’s hilarious! I thought it was just me that did that. I always feel terrible afterwards when I’m reviewing the log. TBH, if you hadn’t said, “M0NOM Mark”, I wouldn’t have twigged.

when I came back you had closed down. I must learn more patience for chasing.

Yeah, I tend not to hang around when it goes quiet for a bit, especially on a high one. I must learn more patience for activating!

Cracking photos Fraser as always and thanks for the contact.

Fraser, what a beautiful landscape and heavy pile ups!
I guess I’m a little bit jealous.

Thank Ludwig. You wouldn’t have been jealous had you been there on Monday!

Well that depends on your point of view. It is the higher of the two and thus “Mor”.
Well spotted, now corrected.

Yes, its ironic. The Mor is a ruddy great lump of a mountain and the Beag is a little offshoot that just happens to be a smidgeon higher - as they say, tanj!

The only time I did the pair we went from the Steall Hut where we were staying, up Coire Guibhsachan to the col then picked up the Mor before returning via the Beag and descending the attractive south ridge. I always intended to return but it never happened.

Hi Fraser and Mo, great report and photos. Thanks; glad you had a good activation.

Great report Fraser. Thanks for the 3 summits.

Hope the weather isn’t too wet out on Mull this week-end.

I appreciate all of the activators on SOTA. I’d love to be a summit activator, but it’s not an option for me these days. I truly enjoy it when activators share their experiences with written descriptions and those beautiful photos. The extra effort in taking a camera along and then sharing does not go unnoticed. Thank-you and all others for sharing.

Thanks Carl. I think it helps the Chasers complete the picture. They can hopefully see where the activation took place and how little or much effort it took to get there. Makes it more than just a summit reference for some I guess.

From my point of view, I just love seeing all those amazing locations from around the globe and how the terrain varies from country to country.

Apologies if I didn’t cotton straight away Gerald, I was in full-flow and my summit brain was at capacity and beyond!

Great to speak to you when you were on GM/WS-002 Fraser. Congratulations on a great bunch of summits and many thanks for the report and photos. I think you gave me a variation on the order of the O, I and G at one point in our QSO, but knew you’d sort it out. I get this quite often… even from those sitting in warm comfy shacks!

Another brilliant report that brings back both memories and a determination to get back up to Glencoe!
Hoping to catch you if you manage any summits on Mull later in the week. We have a holiday booked there for Easter and a few completes would add icing to the cake!
Finally caught you on 40m with some shorter skip. Just watched the RSGB convention session on cycle 25 and I had not appreciated that rising solar activity brings shorter skip on 40m so fingers crossed I can catch you on the bands.

Hoping to catch you if you manage any summits on Mull later in the week.

Hi Paul, We’re on Mull for the rally. I have my SOTA kit but not sure if I’ll get the chance to use it, having got back from the final stage of the rally after 5am. My crew have just had breakfast and voted for sleep over mountains!

Here’s a taste of what we’ve been up to on what was been a pretty wet weekend on the Isle of Mull. 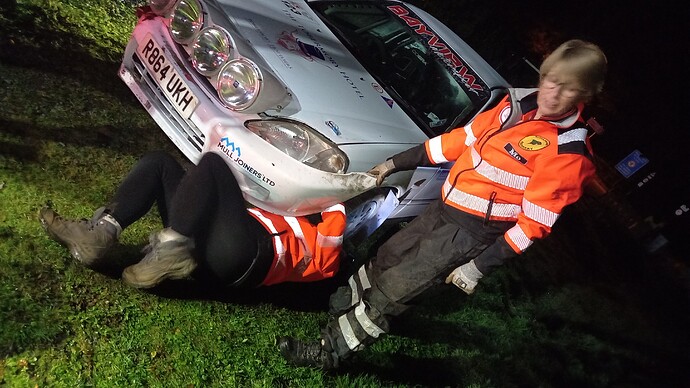 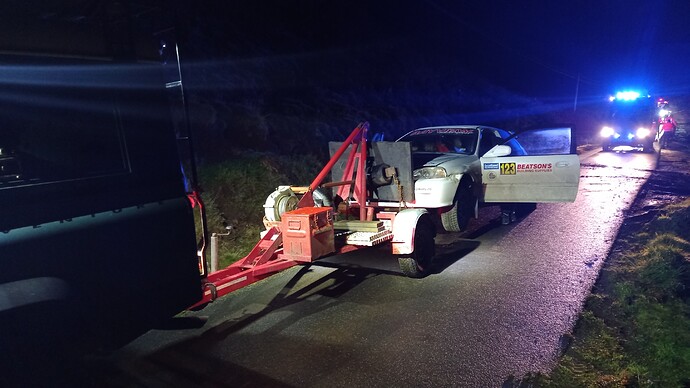