HaHa you just beat me to it,
How you going to carry a guitar and a bucket of coal for the fire the Antron and other radio stuff without falling over in that thing.

I once went backpacking into the desert at Big Bend in Texas with a group of friends and a colleague new to the experience. The first night in, he revealed that he had brought along a complete set of poker chips. We never did play poker on that trip. I could tell you about the tennis shoes he wore and the Sears Roebuck backpack he bought for the trip…

Here is a pair of bevel gears from the junk box that I probably don’t need: 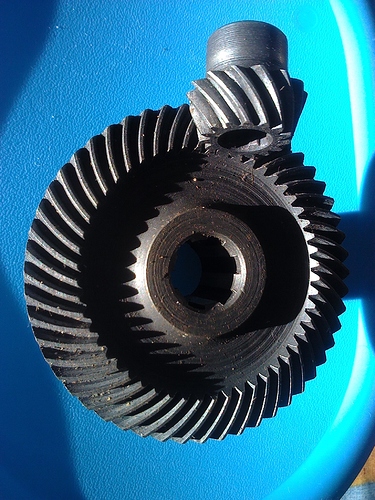 You could perhaps make a good rotator for a portable 2m yagi with that combination of gears.

I’m waiting to see a photo of Andy’s lucky anvil. I am not convinced he actually needs it.

Years ago I climbed Mt. Adams in Washington state with a friend of mine who invited along his brother. For the whole ascent, his brother complained about the weight of his pack. When we reached the summit, he pulled out a 12 pack of beer that he had lugged to the top. I looked on in horror as he cracked open the first of several beers that he consumed. He berated us repeatedly for not guzzling beers with him as he had gone through all the effort of carrying them for us.

I never ever climbed with either of them again.

I never ever climbed with either of them again.

Wow - I would be happy to go anywhere for free beer.

On my very first SOTA I lugged my FT897 along with the radio kit and the amateur with me brought a Co-linear, Telescopic Pole and a stand they had made for it out of angle iron and a motorcycle battery. From that point on I continuously try to reduce the weight of everything I carry.

Beware of “mission creep” Martin. It is surprising how “things” find their way into your backpack. A review is required every so often. The two fold up seats that I took on my first activation were never packed again. … and why two seats - one for me and one for the rig of course!

Here in SA I always carry a 9mm and four magazines of ammo, a panga, a survival knife, survival kit and a first aid kit - not negotiable, and then I have to beware of taking things for the “just in case”. Things like a 12v soldering iron and solder.

Okay it’s not gear, but I’ll never forget that on my first backpacking trip (two nights) I brought a dozen bagels and a jar of peanut butter. It was not the only food in the pack.