Intro:
This turned out to be much more of a dog walk and much less a SOTA as we have come to know it. A major reason for that was abysmal conditions on the 40m band.

Sasha, Daughter-in-Law’s rescue Lurcher from Greyhound/ Staffy stock, kindly agreed to accompany me on this one. After a busy winter covering as many NP’s as possible, choices boiled down to less than ten remaining; excluding one-pointers of course. Great Coum was chosen because it has walls. The dog would otherwise have had to put up with a cold wind in possible low-cloud in single figure temperatures. Sasha is a thin dog with a thin coat and feels the cold unless she’s moving but we now have a superb overcoat which is waterproof and warm. As well as walls, NP11 has fence posts to which a dog can be tethered.

Execution:
I picked up an excited Sasha in Cayton at 07:10; driving via the A170; A684; Coal Road and Deepdale (nr. Dent), arriving at the bridle track (NY 7163 3160) at 10am. We clocked 106 miles. Setting out at 10:20 we were soon on the open fell after passing a very smelly and maggot riddled dead sheep at the wall stile. Even the dog gave this a wide berth. After more or less ignoring them on Cross Fell last year, Sasha was pulling on the lead every time she saw sheep or lambs. Any thoughts I’d had before setting out of giving her some freedom during the activation would have to be put aside.

There are choices of walls to suit any wind direction or there is a hole in the ground further on. Today I set up on the east side of the wall at SD 7015 8344. A short distance further along I noticed movement. Two people were working on something which turned out to be the wall and associated barbed wire.

7.033 CW - 3 QSO’s:
Thinking it would be easy, I texted Roy with a QRV time but despite switching from 30 to 50 Watts, calling him repeatedly did not have the desired effect. Shocked, I tried a CQ and was answered by Frank DL2EF with a 579/ 339 successful exchange. After Frank came OE8SPW but there was massive QSB and at the time he was 559. DF1LE provided the third and final QSO on 40m. After more CQ’ing, it was becoming ever more obvious that conditions were very poor so I called G4SSH on the mobile phone for a QSY to 80m CW. Roy told me that he had not heard any inter-G skip on 40m that day so I abandoned 40m for now.

3.557 CW - 3 QSO’s:
With 50 Watts to the dipole Roy gave me a 339 RST and was immediately followed by Phil G4OBK offering 569. Phil was 589 to me but there was deep QSB on this band too. CQ’s brought nothing further but just as I was about to give up, Gordon G4FGJ called in from Biggleswade, giving me a 449. I could hear a tiny signal after that but it disappeared when I tried to bring it in.

Peppered with wood debris:
By now the two sheep farmers, a man and his wife, had reached ‘my’ bit of wall and proceeded to knock in a post immediately behind me. The wood splinters flying off with each sledge hammer blow and hitting me were no worry but with the ionosphere as it was, the added noise distraction certainly didn’t help.

We had a brief chat over the wall about my ‘CB’ing’ and when I complained about band conditions the man asked if the problem was caused by the approaching low-cloud. These two were very friendly and were well set with all the required equipment on a trailer behind a quad bike. They were swathed in coats; the wind chill temperature being significantly lower at their side of the wall. We exchanged info on our home QTH’s. Theirs was some 4 miles down the fell in an indicated direction of southwest. I think they said ‘Fellside Barn?’

20m?
I next had a look at the 20m band which was open but decided a lot of time had been used up already. Wrapped in her thick red coat and lying on the grass, Sasha was not cold but was starting to get a little fidgety and wanting of attention. Nevertheless I tuned to 14.052.6 and thought I would give it a go. Pulling the phone from my pocket I now found that the signal was completely absent. Without a phone I could not get a spot and without a spot I might call for a long period on 20m without result. ‘Time for lunch’ thought I but I was forced to share my favourite tuna fish sandwiches with my four legged friend.

7.160 SSB - Nil:
Surely the WAB net would provide some QSO’s? A 2E0/ Portable was calling CQ WAB on there but when I called him, he asked for a couple of repeats then gave up. He was only about 41 to me anyway. He continued calling without result. Thwarted again.

After a gap of almost half an hour, the phone signal was producing one bar on the meter so phoning Roy again I explained that I had finally given up on HF and taken down the dipole. A spot on 145.400 was forthcoming and there finally, I had some extended success.

145.400 FM - 12 QSO’s:
With 5 Watts from the FT817ND to the vertical half-wave, the following stations were worked between 11:47z and 12:40z: G4ZRP Brian in the Wirral who reminded me that I was still on S20; G1KLZ/A and G1OHH - Doug and Sue both in Lancaster; 2E0SIA Simon - Bolton; M0PVA Mick in Clitheroe; G3TQQ/P and M0HQO/P Dave and Pete from Pickering but presently S2S on Rogan’s Seat G/NP-014; G4WHA/M Geoff near Penrith (gone mobile for a better signal); G4RQJ Rob - Walney Island, thanked for his ‘View from the North’ articles; G0TDM John Penrith (heard but not worked earlier on 80m CW); GW4TQE/P John S2S on GW/NW-048 and GM3VMB Peter in Lockerbie.

Peter is always bemused about the reasons for activating. He laughs and asks, Why sit on a mountaintop in the cold and wet when you could be in a nice warm house?’ Why indeed! I would be the first to admit that it’s not Peter who’s crazy. He is also an old friend, having dug me out of the ‘fourth QSO please, please, beg, beg’ scenario a few times in the past.

Thanks must go to Sue for allowing Doug to work her apparently ‘superior’ station. There was a rare chance for a word with Mick in Clitheroe. His only rig these days is a handheld and today it was hooked up to his one remaining antenna - a 2m band colinear.

It was great to get the entire SARS ‘SOTA table’ together and an S2S too! There will certainly be something to report in ‘Any Other Business’ next Monday. Another S2S was provided by John on GW/NW-048 which is a summit I’d never heard of near Bala. Our working conditions were almost identical and the exchange 55 both ways.

Descent and drive:
Once Sasha realised that I was packing up, the hang-dog look was replaced by excitement. Unfortunately she was pulling hard as soon as sheep were spotted; not good on the descent. After a little water from a stream on the way we arrived at the car at 14:39.

The distance back to Irton, Scarborough was 111 miles via Ingleton, Hawes, A1, A168 and Sutton Bank. Starting at 14:48, he journey was completed by 17:45. After a long car journey which to my mind is SOTA’s main drawback, Sasha was visibly delighted to be reunited with her owner and I was proud to report ‘Generally well behaved throughout.’

Thanks to ALL STATIONS WORKED and to G4SSH Roy for spots via text or phone. Special thanks to Sasha for keeping me company and to Hazel for parting with her for the day. Apologies to approximately 60 stations I didn’t work!

Observations:
Band conditions on 40 were terrible today. I do not often use 80m in summer and I was surprised when it delivered even three QSO’s; the furthest Biggleswade. 2-FM at least helped save face and it was grand to work the keen Pickering lads with a summit to summit.

Sasha enjoyed the walking and her new coat worked very well with no shivering. I took a carry mat and spare fleece for her to lay on during the activation but for some reason she favoured the grass which was damp. She also preferred my sandwiches to her own food.

That’s another thing ticked off the list for the summer. Next, in early July we have VHF-NFD which I like to do from Great Whernside NP8. I hope I can be there once again weather permitting. 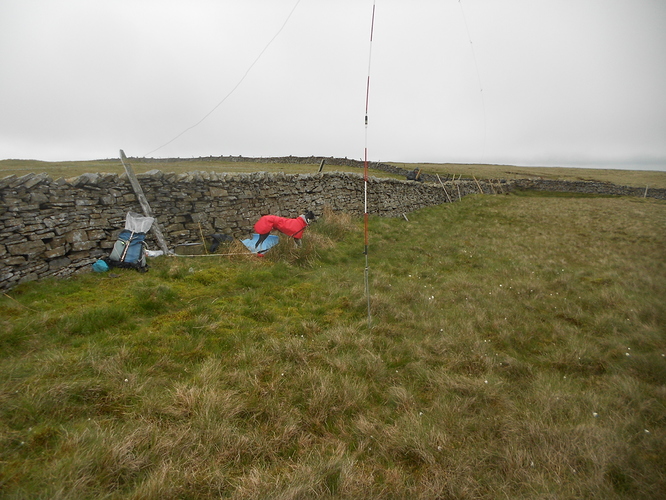 Above: NP11 QTH & Fence Menders further down the wall. 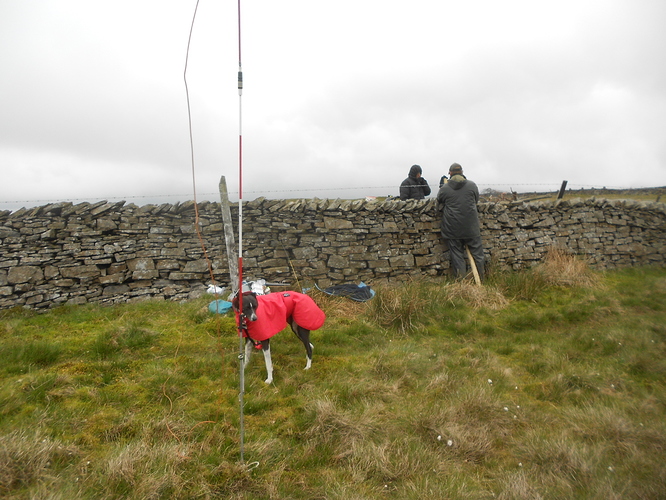 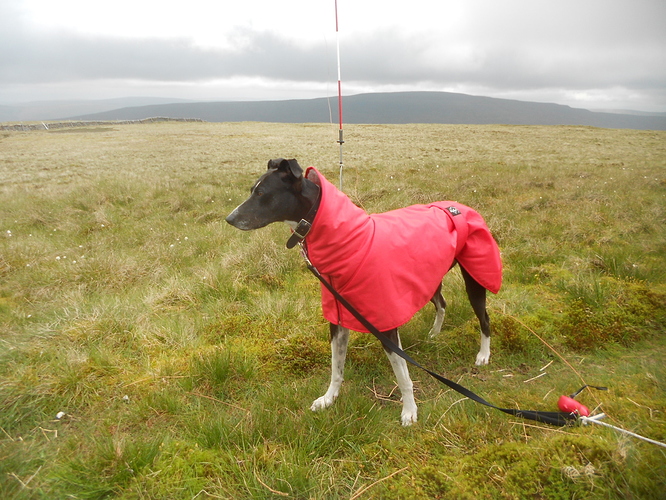 Above: NP11 QTH & Sasha with Whernside NP4 behind. 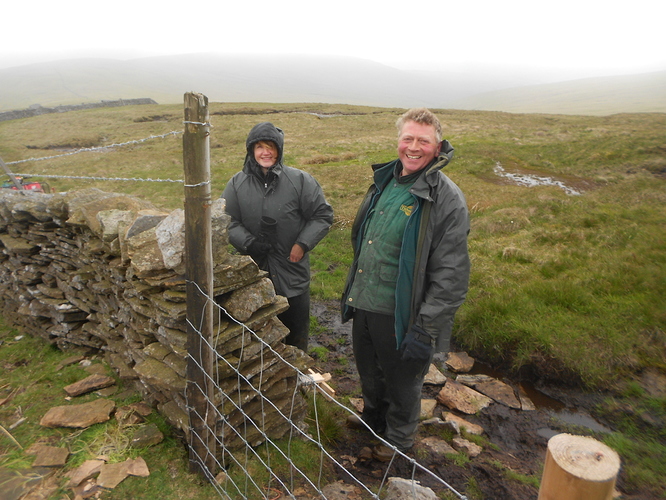 Above: The Fence Menders. A tough hill farming couple! 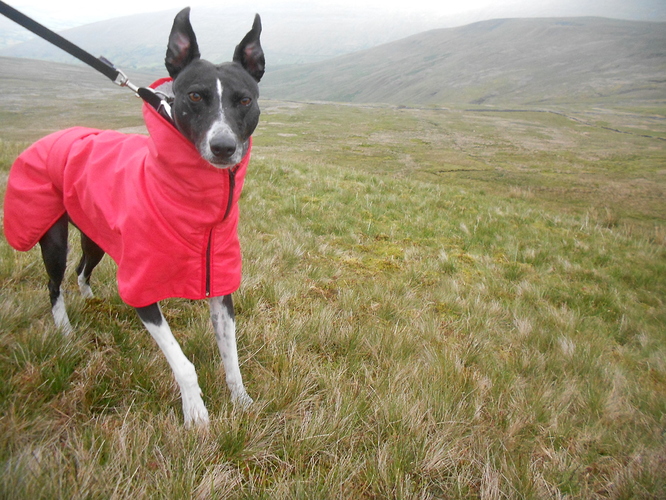 Above: Sasha securely on the lead.

Thanks John for the interesting report and photographs. Yes greyhounds and whippets only have one fur coat, most dogs have two so like Sasha, Bertie the greyhound here has a poor/cold weather bit of kit