Introduction:
This was my third activation of this hill who’s name I can by now just about pronounce. It’s only a 5-minute drive from where we were staying for a 10-day holiday at the Highland Hotel in Fort William and it provides good practice when you’re a bit SOTA rusty.

WS-293, though a mere two pointer, is a reasonably demanding climb but one that can be completed in under an hour. There are few paths to help very much, or at least I have yet to find a good one, apart from the one on the final approach. Perhaps that has a lot to do with my habitual start point, which is at the cattle grid on the road going south out of Fort William.

Route and Execution:
I left the car on the grass verge immediately north of the cattle grid at NN 0962 7040 (110m ASL). Setting out at 13:51, I followed my GPS route up the track opposite, which goes in a north-easterly direction. An acceptable approach is to leave this track at NN 0983 7058 and head up the side of the fence to NN 0991 7053. From there it’s cross-country and uphill to NN 1020 7038 where a second track is found to be heading generally in the right direction.

I usually leave this ill-defined grassy track between NN 1075 7081 and NN 1088 7101, to head up for the ridge but decided to abandon it earlier today. It was a steep climb but somehow this departure from the norm, got me up there marginally quicker. Once on the ridge there’s a minor path with a few ups and downs, which goes along to the summit cairn via NN 1129 7069. Just where this path originates is unclear but it might be advantageous to find out. Today’s climb took 54 minutes but it’s very far from the hardest 2-pointer in Scotland.

A grassy top offers plenty of space for a full sized 80m dipole and today I sat close to the cairn after first admiring great views of Ben Nevis’s westerly aspect some 5km away. The zig-zag tourist path, which goes up the top half of the mountain, is clearly visible to the naked eye.

7.031.5 CW – 2 QSO’s:
With power set to 50 Watts (5 Watts drive into the amp) and a spot via SMS I was disappointed to log only two stations as follows: EI6FR Declan at 599/ 549 and EA2DT Manuel with 559/339. Surely something had got to be wrong but all the controls were set up properly including the output filter on the linear. While I was checking, no less than two stations started calling CQ on my frequency plus another two who had started up a QSO. I gave up.

Switching to SSB I called half a dozen of the contest stations up and down the band but not one heard me. 7.160 was occupied by a DL0 calling ‘CQ Field Day’ so I couldn’t even give the WAB’ers a call. In the end it was discovered that this idiot op had mistakenly left one 80m link connected on the dipole which would make it resonate at around 60m and not the 40m as intended. Of course you don’t see that when you’re working through a linear. The FT817ND says ‘perfect match.’

1.832 CW/ 1.846 SSB – Nil:
Why bother? I simply had to try Top Band but despite a self-spot there was nothing to show for it. I would have been shocked to get a QSO on 160 considering the time of day and local topography but nothing ventured as they say.

145.400 FM – 1 QSO:
With a few minutes to spare at the end I put out a CQ on S20 and was very happy to receive a call back from Robin GM7PKT, just a few miles away near Corran Ferry. He told me that he hadn’t done much lately, meaning SOTA. He’s not the only one.

Robin was able to fill me in regarding some of the local SOTA’s and of course Ben Nevis was discussed following MM6GYU’s recent visit there and all the rubbish Dave found. He also explained the ins and outs of APRS to me and it seems that it would be good to have it as a safely system should one get lost etc.

Working conditions were the FT817ND and 5W to a J-Pole at the summit cairn. Robin was 59++ to me with a 55 report coming back and he was using a dipole. Despite our delayed handovers and a few invitations, no other stations called in.

The Descent:
Unlike the climb up, there were no detours on the way down. With no path available much of the way, care was needed on the steep tussocky ground. I followed the route marked in 2015 and described above, which took 35 minutes to 17:28. With just a 5-minute drive to the accommodation I was back in good time for evening meal at 18:15.

Observations:
WS293 was ideal today as a bit of training and an afternoon out in pleasant surroundings and weather. I walked through bracken in places so there is a tick risk. The extractors are in the first aid kit!

Along with the chances for 40m band chasers, thirty minutes were thrown away due to lack of care changing the dipole links. I just hope my linear is still working.

20m CW added a bit of excitement but unfortunately my Morse abilities have receded somewhat due to lack of practice. My son Phil text to say he listened to this session and recorded it using a receiver in Andorra. Listening to it I seemed a bit slow but that was mainly due to stations calling on top of one another – not their fault I might add, as they can’t all hear one another. It also looks like I might have missed out on an A5 station. There was no SSB in my log mainly because of the time lost and the field day contest on the HF phone bands.

Random thoughts:
The cricket test match kept me entertained on both walks but as it stands I think India will win this one. The sight of Ben Nevis both inspired and daunted me in equal measure. There were plenty of grazing sheep but wild life was limited to two grouse that flew away noisily. Red or black? Couldn’t tell due to mild colour blindness.

Thanks to all stations worked and to GM7PKT for spotting me on 2m. Also for the SMS spotting service which is wonderful when the phone has a signal. Thanks to Phil G0UUU for recording the 20m-CW session. 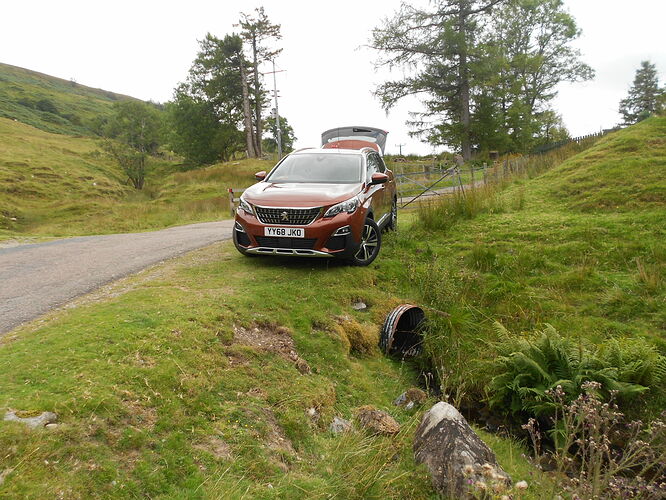 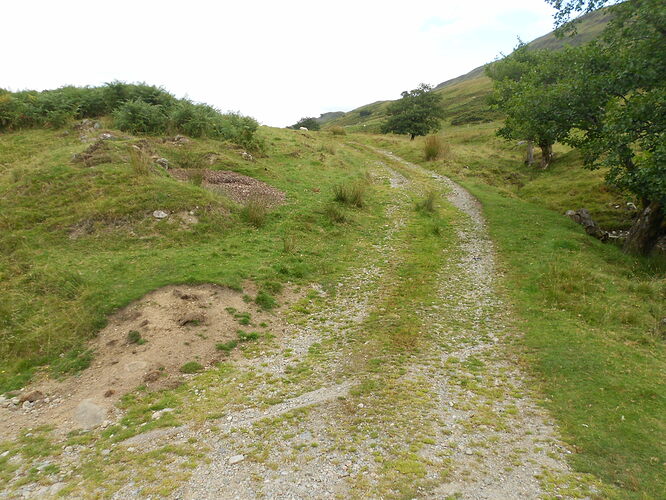 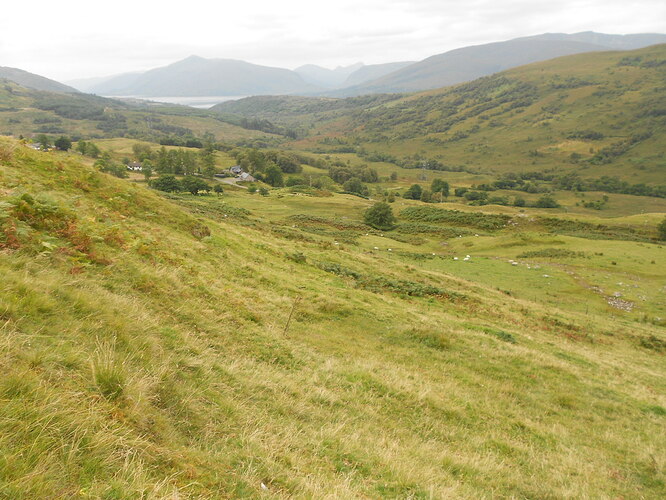 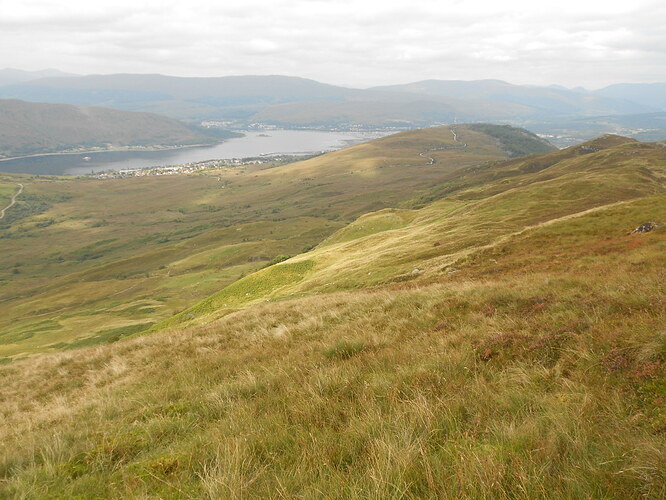 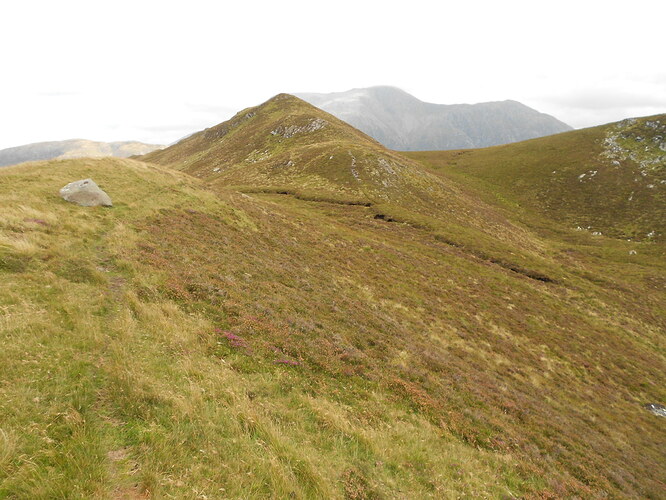 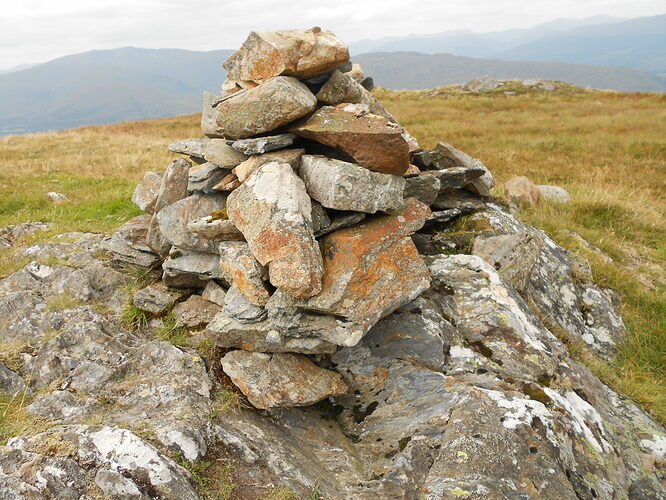 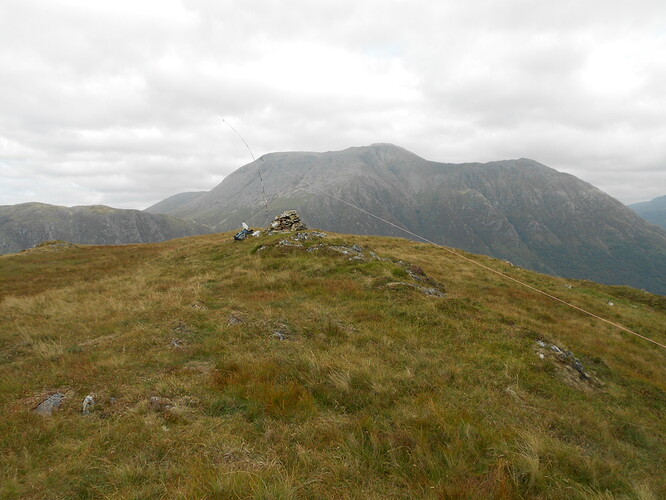 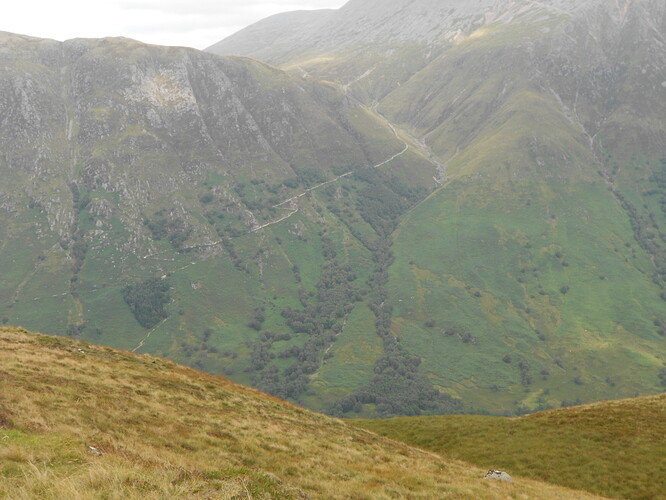 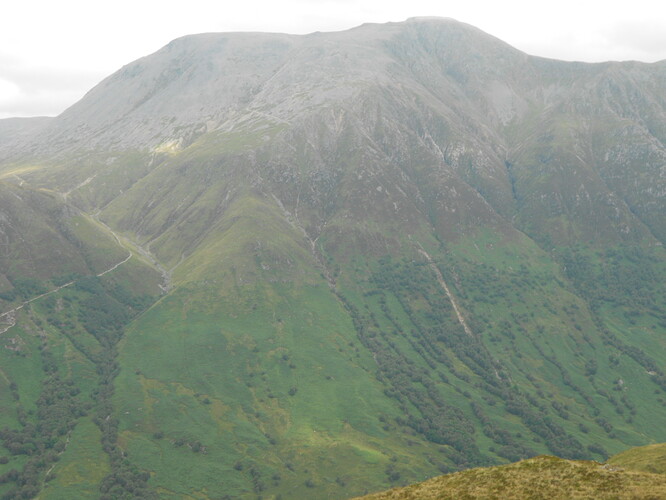 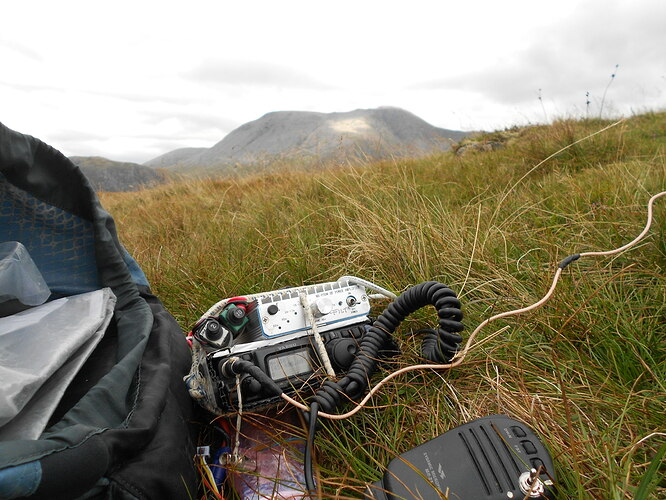 G8ADD: Just a small correction, John: it is Bidhean Bad na h-Iolaire, pronounced something like Bijan Bad na Hilary (apologies to all Gaels!) Never set foot on it myself, it looks like more of a penance than a pleasure though it looks good with snow on it! Brian.
THANKS BRIAN, I NEVER COULD QUITE GET MY TONGUE AROUND IT BUT I CAN PRACTICE NOW.

Sorry that these replies to replies are 6 years late!
73, John.

Hi John, have you tried 30m? I find it never disappoints (with my 10W of CW) and no contest stations either. They are usually more polite too than on 40m

They should have slowed to match your sending speed. But then some 20m folk aren’t as polite as most 30m chasers.

Thank you, that’s very useful. I’m staying in Fort William in a couple of weeks and had thought of doing Druim na h-Earba GM/WS-339 as it is within walking distance of my brother’s house where I will be parked in the campervan. But your summit probably has better views of Ben Nevis.

Hello Andy,
Thanks for your reply.
Yes I have used 30m in the past and once or twice it has almost single-handedly saved the day. I agree that it is easier going than 40 and 20 plus there’s the advantage of less traffic as you say. In this case my signal was terrible due to wrong dipole adjustment so few heard me on 40m.

‘Slow’ is ambiguous and in this case refers to the session speed/ duration/ QSO rate rather than my sending speed. You are right about sending speed though. It’s the norm that chasers slow down to the activator’s speed and 90% or more do. There are a few that come in at up to double my speed which in my case means I need them to send their call ten times before I get it whereas once or twice would be appropriate if they were slower.

My imagination runs away with me. I visualize them running down the stairs from the shack after the QSO, gobbling their lunch down in 20 seconds and running back up for the next contact. Then out to the shops via the radar trap with obvious results. That is for entertainment only and is not a complaint as I greatly admire people that can send and receive Morse at vast speed. I just wish they wouldn’t aim it at the poor chap who might at times be slowly freezing to death. I dearly love Morse despite the fact that I am not and never will be a ‘natural’ at it. I do like to have some of it in my log on HF activations.

Hi John,
Glad to be of service. It’s just so convenient if you’re staying in the Fort that it can’t be overlooked. The only downer is the lack of paths but so many GM summits don’t have them, especially the minor ones. The path which goes along the ridge must come from somewhere in ‘civilization’ but the only way to find where is to follow it back from the summit. I have never tried that as I didn’t want to have potentially a long hike back to the car or end up in the wrong valley. It would take a local to know about this or to try it with plenty of time available. If I lived here I’d use WS293 as a dog walk.

This WS339 is news to me but I see that Tom has a good article on it. Druim na h-Earba WS-339
I may find time to have a look at that depending how far it is from the hotel. I need the exercise so thanks for the tip.

All the best and enjoy you holiday,
73, John

@M0WIV …Do them both John as they are close and they are off the same access road. Lovely views. Looking forward to hearing you this week. 73 Allan 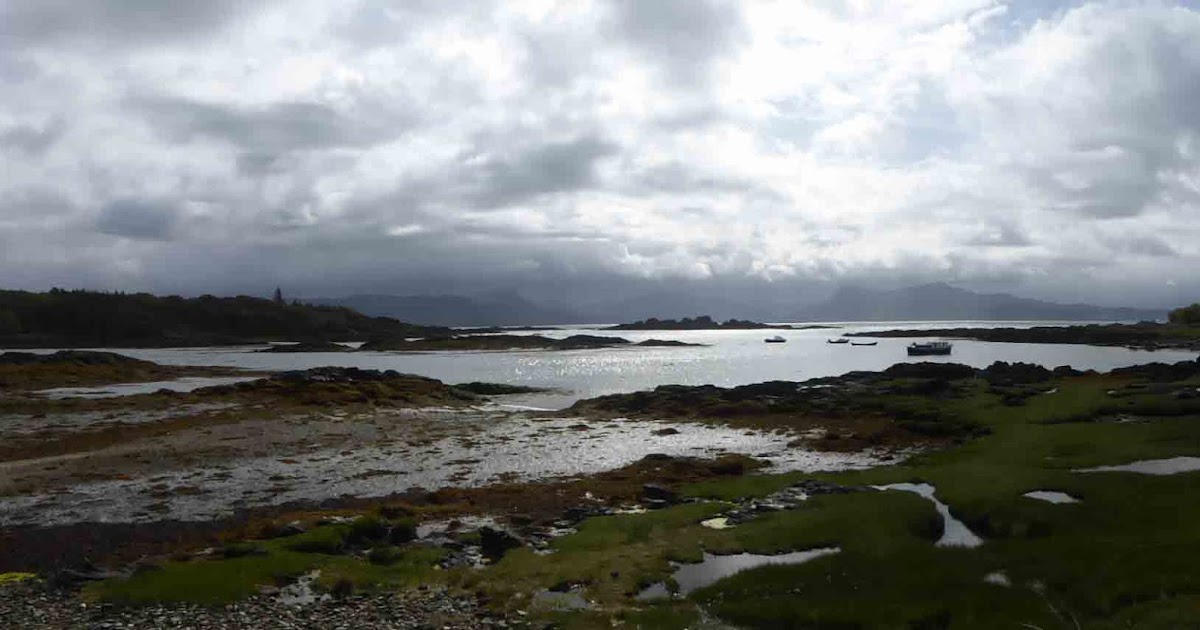 Thank you, your blog confirms this summit has better views of Loch Linnhe. All down to the midges now.

I find it never disappoints

It didn’t disapoint me today. Much better than 20m which was 50% awake and 50% dead… there’d be a small pile up calling then nothing then a few minutes the small pile up would be back. 30m was consistent.

Thanks for the QSO today. I was very pleased as it was our first QSO together between us. See you next time.

Thanks John for your great activation report and photos.