LAKES WEEK-2019:
This was day-4 of our annual six-night break in the Lake District with the usual walking group; just three of us this year plus two non-walking XYL’s.

INTRODUCTION:
The Day-4 forecast was more promising than the previous day when we wasted 3 hours in the rain waiting to do Helvellyn, eventually climbing Skiddaw instead.

Rob intended to walk today but his wife Chris, who has MS and is totally blind, sustained a nasty fall on a path next to Derwentwater the day before. Despite Rob’s best efforts to guide and safeguard her, she had managed to fall in a beck injuring her wrist and forearm. For Rob today’s walk was cancelled in favour of taking Chris to Keswick hospital for an X-Ray. At least that was the plan but in the end they made do with tubigrip from the chemists after the injury improved somewhat overnight.

So for the third day running David elected to walk with me and it didn’t take much agreeing that the target should be Helvellyn, albeit with the hope for better luck weather wise. The plan was for me to go directly to activate Helvellyn while David walked over Nethermost Pike and High Crag to Dollywaggon Pike. He would then double back and join me on Helvellyn by which time I would hope to be QRT.

Route:
The path leaves the car park (NY 3244 1362) via a gate in the NE corner and passes initially through trees to cross a track at NY 3269 1363. The trees, some of which have been felled, are left behind at around NY 3282 1353 and the easy-to-follow path becomes paved a little higher up. After that it’s gravely.

From there the Helvellyn shelter can be seen; provided it isn’t misty. A few feet of altitude are lost, just before the top junction and from there it’s a straight 10 minutes walk up to the summit shelter and a little further to the trig.

EXECUTION:
I’m pleased to say that Wythburn Church Pay and Display car park is still free; the pay point covered with black polythene. For the past three years a notice has stated: ‘FREE PARKING UNTIL FURTHER NOTICE.’ ‘Thank you for your patience during a period of recovery from Storm Desmond.’ It goes on to mention damaged footpaths and infrastructure which might affect walkers around the Thirlmere district due to closures etc. No closures were encountered today, though I did notice that contractors are still working beside the A591 north of Swirls putting in pipes to carry Thirlmere water into Keswick.

We were underway from Wythburn Church car park at 09:55. The weather was fine with no sign of rain but the sky was a bit dull. With a long ascent ahead of us, the latter suited our purpose and the cool wind further up added to it.

From just after the start we could see three walkers, one with a ‘shock’ of curly blonde hair ahead of us. About half way up we caught them up and found them be a family on holiday from Melbourne, Australia. They turned out to be very friendly, the daughter with the highly visible hair, now covered against the cool breeze, asking us if David and I would like a photo together. After accepting, she directed us to a grassy knoll beside the path (no, not that grassy knoll) where we lined up for the said photo. The mother turned out to be from Lancashire a long time ago and had childhood memories of walking in the lakes with her parents.

Setting up:
For obvious reasons in summer and sometimes in winter too, I didn’t want to set up in the shelter, instead walking to the cairn which marks the highest point and carefully climbing down below it. All movement here including climbing down and the deployment of the station must be done with great care to minimise the potential that the op or his equipment should roll down the steep 230m slope and into Red Tarn. Once down there I was out of the wind.

I had two or three visitors before I’d even set up properly. One said he’d seen someone doing this sort of thing on Cadair Berwyn in Wales and another lady asked who I’d be speaking to. The Australian family passed by too and we exchanged waves. A man and woman seemed spot-on about my plans but it was only afterwards that I found out that they’d met David who’d told them to look out for my aerial.

There was sufficient depth of soil on top of the ‘lip’ to get the mast securely in with just sufficient coax to reach the rig on the shelf below. There I sat with my feet hanging over the drop looking directly at Swirral Edge to the NE. There were a few people ascending it.

145.550 FM - 10 QSO’s:
Using 25W from the MT270M to the vertical J-Pole, proceedings were opened by working G0TDM. At 11:15z, John was first in again and ready to spot. G4WHA/M Geoff, working through his setup at the Carlisle computer shop, followed two minutes later. These two really are dedicated ops, more often than not timely and keen to help too.

After John and Geoff I logged 2E0BLL Mike in Kirkham; G4ZRP Brian on the Wirral; M7FRD/P Rick S2S from Fair Snape Fell G/SP-007 on only his second ever SOTA activation; G1OHH Sue in Lancaster; MW0ISC Steve near Mold; M6BLV John at Ellsemere Port; M0NOM/P Mark portable at a high point near his home in Windermere and M(W)0RKD/M Russ on his way back home from Scotland to Wales at the end of a family holiday.

Most reports were 59 or 59 plus with 55’s from Ellsemere Port and the Wirral. Brian G4ZRP was using only 2 Watts to an outside antenna. The session spanned 28 minutes; the frequency drying up at 11:48z. I made a return here at 12:12z after a break but despite a self spot, nothing further was worked on 2m.

Having met his targets of Nethermost Pike, High Crag and Dollywaggon Pike, David arrived at Helvellyn’s summit at 13:08. By then the activation was over apart from a second chat with Geoff G4WHA/M to confirm the non-QSO on 4m-FM. Hardly surprising with a handheld when Geoff was in the centre of Carlisle but we’d tried.

I indicated for David to come down to my position as there was space beside me where he could sit to eat his lunch. He would have none of it, deeming it dangerous and backing off down to the shelter to sit with the many walkers there. After a short time packing up, I joined him while he finished his chicken tikka bread roll, bought fresh that morning from the shop in Keswick. I don’t usually eat anything on the hill if I’m staying in a BandB.

The Descent:
We left the shelter in sunshine at 13:36 reaching the car park by 14:51. The drive back to Keswick only takes about 20 minutes, leaving plenty of time to walk down to the shops. Thursday is market day but inevitably I seem to be drawn to the outdoor shops. A few have closed down or moved but there’s still plenty of choice.

Comments:
Once again it was an advantage to have the company of David. Time was not an issue; no need to rush with only VHFM to do and all day to do it. Best time for this route from car park to trig was 70 min up and 49min down on 04-06-15 in perfect walking conditions. We took our time today but David seemed to enjoy the achievement of two three thousand footers on consecutive days and I was glad of the company not to mention the points. It’s a lot less painful than when I am entirely alone.

The weather cooperated in that it was dull with no sunshine in the morning; ideal ascent conditions. Once that was over the sun came out but unlike on the same date last year, when the summit became a sun worshipper’s paradise, there was a cool breeze.

2m-FM is not like it was in the few years starting from about 2003 to 2004 but it is better than when we first started activating SOTA in Spring 2002. The use of 4m-FM paid off again with two stations worked but these would be the first and last of the week.

Thanks to all stations worked and to G0TDM John for spots. 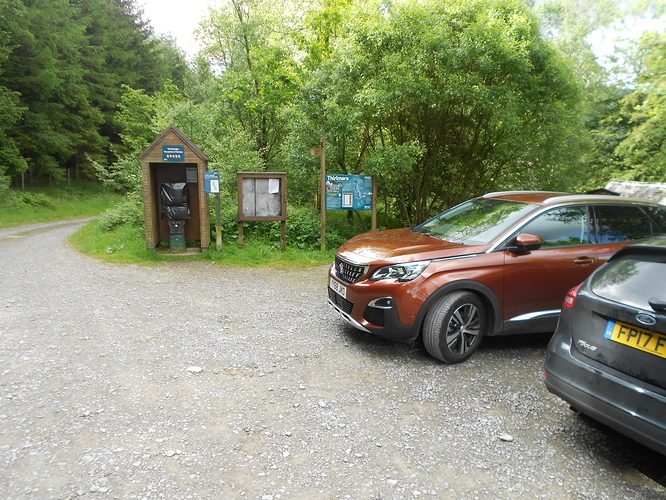 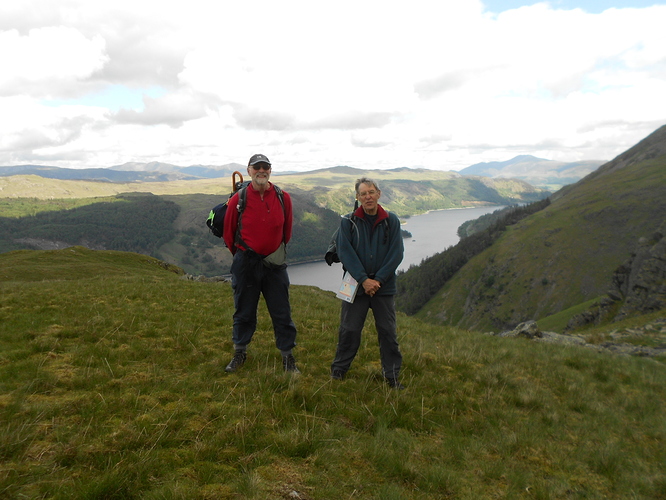 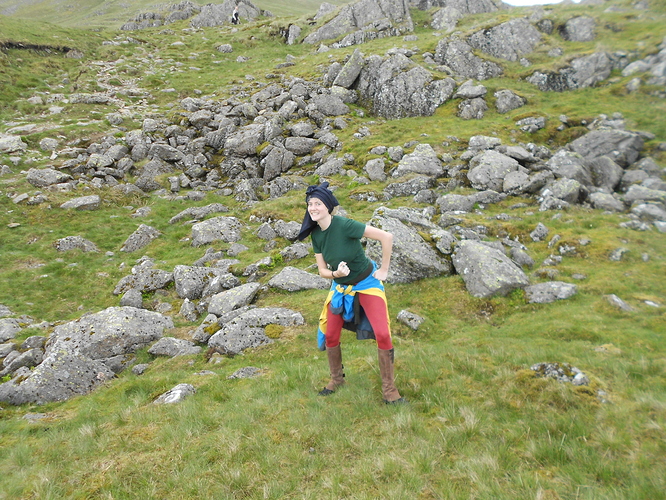 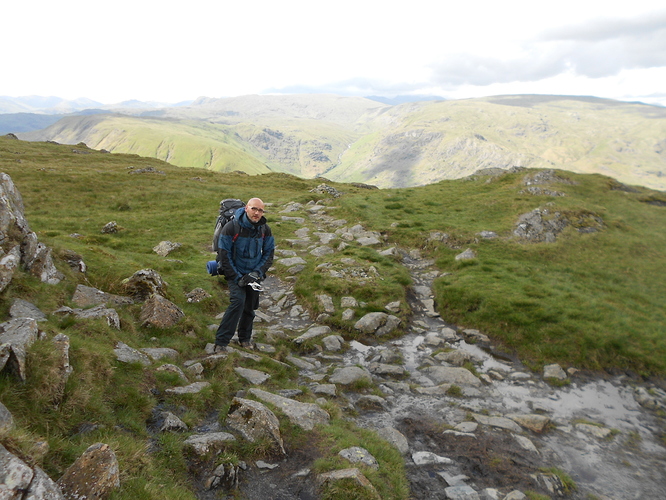 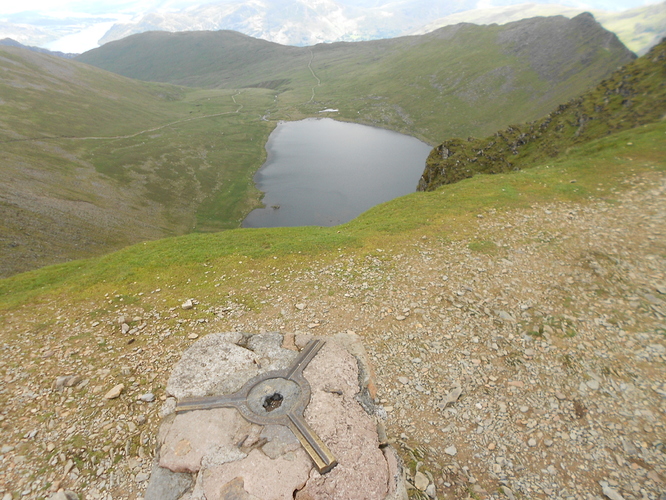 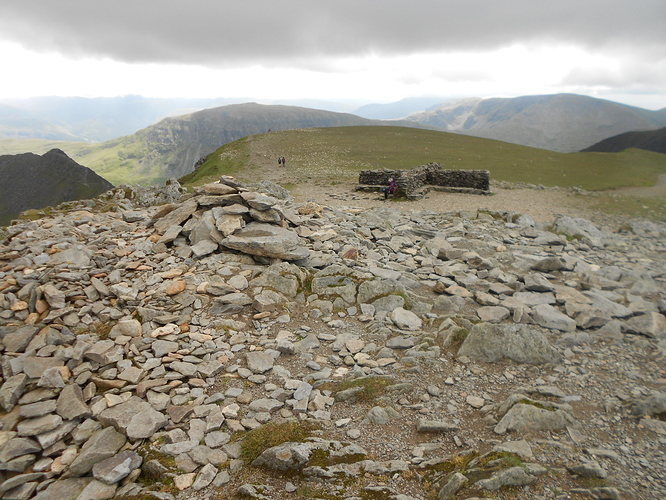 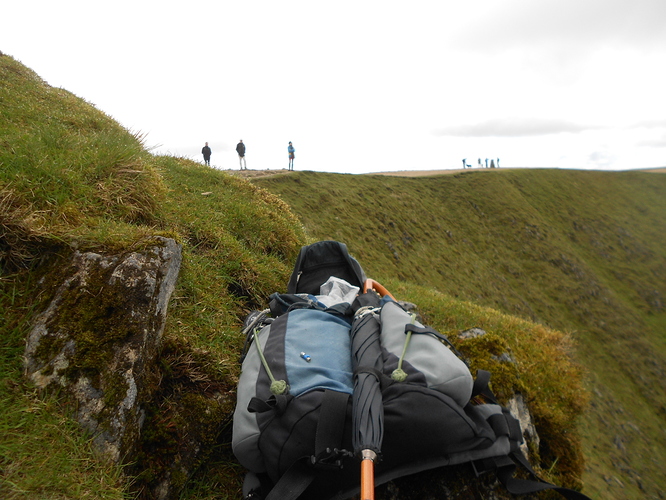 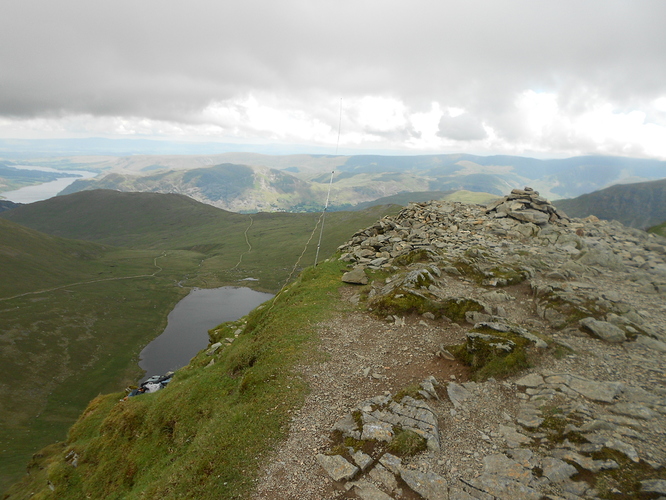 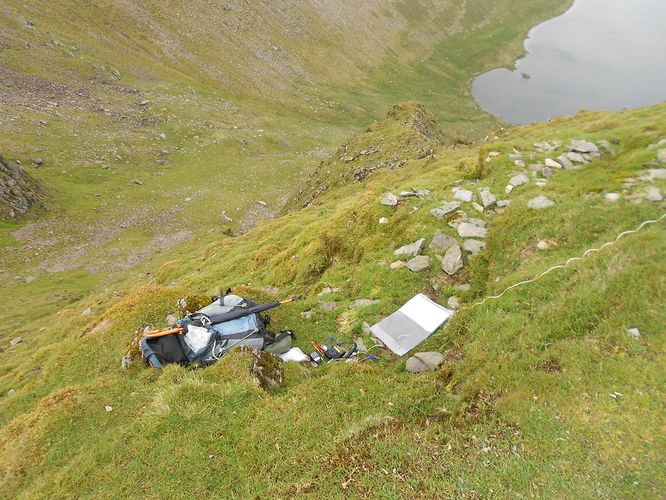 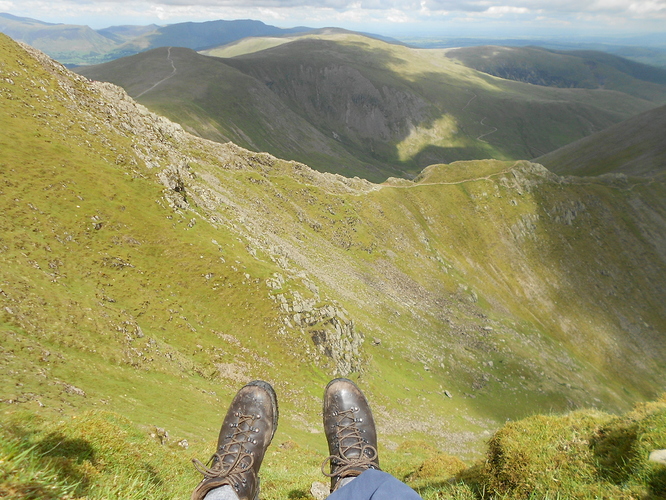 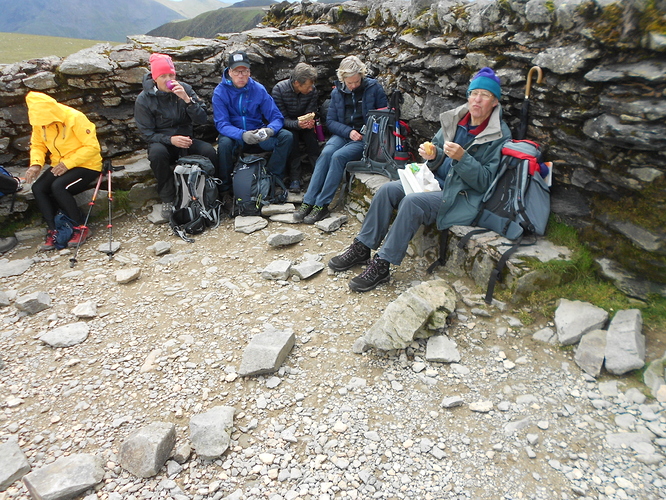 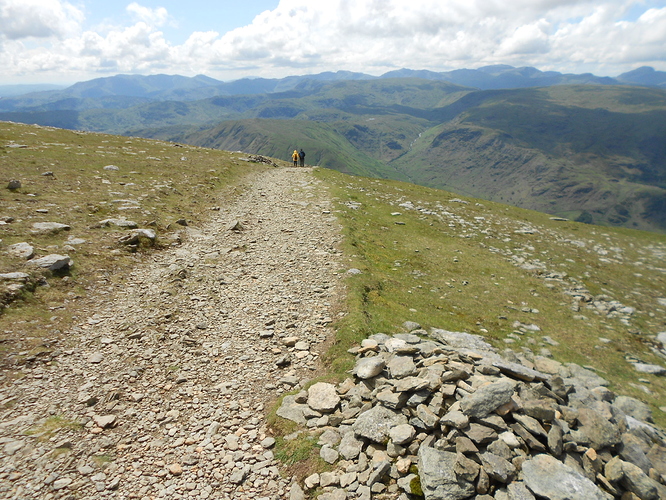 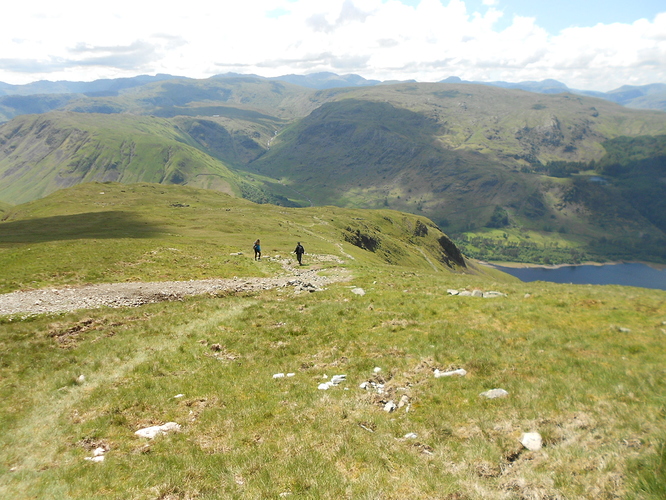 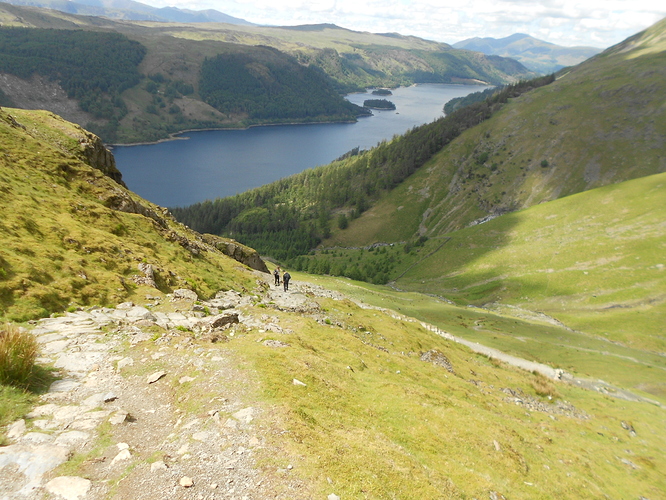 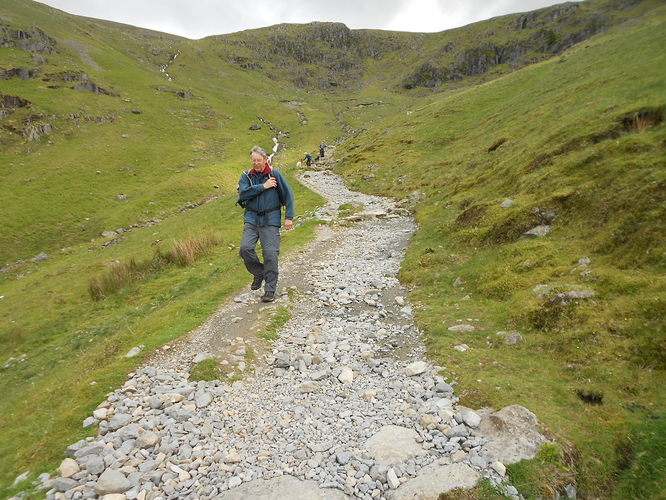 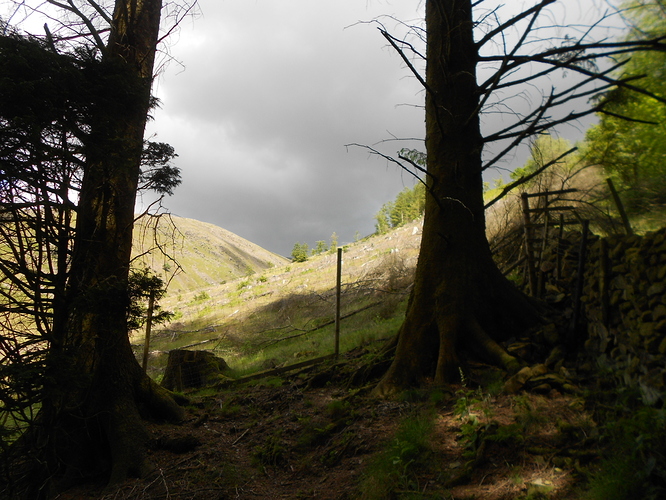 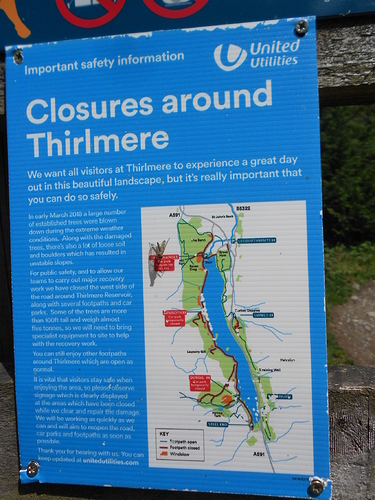 . The reason is that I could hear you with qsb at times. 50 watts and the 5ele beam was not enough to attract your attention

. Anyway, I enjoyed trying and glad that you had a good activation.