INTRO:
Last year Roy G4SSH and I travelled together from Scarborough to attend Blackpool Rally. Unfortunately a year later, Roy wasn’t fit to endure a long, tiring day, though he would have given anything to be there. Roy’s daughter Heather looked at ways in which we might make it possible but eventually it was ruled out. She did say that if there was anything similar closer to Scarborough, she would come up from London and take him herself. As we know, there’s only one Blackpool Rally; it’s where all the SOTA and WAB friends meet.

In 2013 and 2016 an activation of G/NP-004 Whernside preceded the NARSA Radio Rally at Norbreck Castle Hotel in Blackpool. NP4 is a good camp-over mountain so just in case, I put it in reserve for later this year. Which other SOTA overlooks the Norbreck Rally? Looking at the map it was easy to see the value of Calf Top for this role. It’s a hill I don’t often go to and therefore probably wouldn’t ‘need’ for any other purpose later, though it can be useful if we visit our friends in Sedbergh. Yes, the M6 could be easily covered from here and a few other places besides, particularly with 25 Watts fired out of a 3-ely SOTAbeam. NP22 has fewer than 100 activations to its name; a third of Ingleborough’s tally and another good reason to revisit.

The weather forecast was for decreasing light winds, a little low-cloud, no rain, occasional sunshine and a summit temperature rising to 6C. Unlike 2016 on Whernside, there was no lying snow anywhere in NP or LD. No problem with the WX then but if the rally had been the day before I would have cancelled the activation and gone straight there.

EXECUTION:
The 113 mile drive from Scarborough via A64, York, Harrogate and Kirkby Lonsdale, took from 04:30 to 07:03, with none of the daytime frustration. There’s enough space to park on the verge towards the top end of Barbondale at SD 6832 8645, where pleasant sunshine greeted me. There was no rush to get ready; the higher concentrations of potential radio contacts wouldn’t appear until later in the morning.

Here it begins to parallel the top wall which is followed to a stone stile with a wooden top gate at SD 6738 8691. Climb the stile and walk to the summit along the NW side of the wall, passing over the minor high point of Barkin Top (SD 6691 8646) on the way. This final distance is over a mile and impatient as always to get there, I arrived at the summit at 08:16.

145.500/ 145.550 FM - 29 QSO’s:
I alerted this activation but without much warning. The advantage of choosing relatively simple equipment was that the station was quickly up and running. Being quite early on a Sunday morning, the QSO rate was slow at first but just one CQ brought in the first contact.

First in the log was G4RNI/M; George giving his QTH as ‘38 miles north of Blackpool.’ As soon as I heard ‘RNI’ my ears pricked up and I couldn’t resist a short chat about one of my favourite 1970’s radio stations.

George and I are like-minded. When the Marine Broadcasting (Offences) Act became Law at midnight on 14th August 1967, this 18-year old thought the music World had ended. The two Radio Caroline’s did continue but it wasn’t long before they were towed into port due to unpaid tendering fees. I vowed never to listen to Radio-1, the so called replacement and I never have. What joy when a mate, who still had the faith to continue regular ‘wandering on the waveband’ as he called it, came up with Radio Northsea International (RNI) on 186m MW in early 1970.

It seems that George waited for his unique callsign, which was issued in 1982. If you take a look at George’s QRZ page, you’ll find out more about RNI but unless you were a listener at the time, the magic will not be present.

One of my core subjects in life, I could witter on indefinitely but enough of offshore radio for now. After George had put me in a nostalgic mood, I worked 28 more stations as follows:

2E0EVD Clive Furness ARS member on Walney Island; G0TVB Paul using 10W from Hebden Bridge; G4GTX/M Stuart at the rally venue with a trusty FT290. At 19:18z G4OOE/M and G3TQQ/M Nick, Dave and Dave’s twin brother Philip on their journey to the rally from the Scarborough area and finally M1AVV/M Simon a long-time SOTA chaser on Walney.

All contacts used 25 Watts from a Moonraker MT270M miniature mobile rig, to a vertical 3-ely SOTA Beam pointing south towards Blackpool most of the time. 80% of the stations worked were either on their way to Blackpool , already there or preparing to set off. Only seven of the 58 reports exchanged were not 59.

The most difficult contact to complete was 2W0DDD/P Robert in Anglesey. I can’t remember the last time I heard such a weak signal on FM but with a lot of perseverance on both our parts, I logged first his callsign one letter at a time, followed by a report. My 31 to him was very generous because most of the time Robert was unreadable. You remember these hard-won QSO’s.

Notable well known SOTA callsigns with a /M suffix were G4WHA Geoff; G0TDM John; G4OOE Nick and G3TQQ Dave. Also I worked Dave G0EVV/M who needed NP22 for a ‘complete.’ Happy to oblige and I did work one H2S which was GW1CJJ/P Phil on HuMP HMW-017.

Descent:
A simple re-trace of the ascent route, adding a few extra waypoints on the way, the descent took 41 minutes to 11:17 which gave me time to change from walking kit into normal clothes for the rally.

A SOTA Chase:
On the way down the M6, I answered a ‘CQ SOTA’ from G(M)3YTS/P Rob on Helvellyn G/LD-003. We exchanged 59 reports on 145.400-FM at 12:05 (11:05z) and I was Rob’s first contact. I did point out that by now most of his potential customers would be busy looking round the rally but I think he already knew. He was putting out a cracking signal but despite my best efforts at fixing it, my car heater is jammed full on all the time. With the windows wide open it’s hard to hear properly. I heard Rob calling later on 145.500 and he seemed to be having a thin time of it. I hope he qualified or had HF with him.

Observations (NP22):
It was a pleasure to sit up at 2,000 feet (actually 1,998) on the grass for a couple of hours so. This was a lightweight low-stress activation on just one VHF band with no complaints about the weather.

I now feel that the NP22 route is finalised. I never enjoyed cutting across country and new fences have appeared making it a lot more difficult. Though it meanders quite a lot, following a quad track all the way up is preferable in case of bad viz or GPS failure. I find that marking plenty of waypoints is important. It’s one thing to walk up these hills on a warm sunny day but quite another in the dark, over snow & ice and in a fog. That’s when you need waypoints frequently enough to find your way back to tracks and paths when it’s all so easy to lose them. Marking them in good conditions is the valuable thing to do.

Shortcomings of the receiver in the MT270M, namely selectivity, didn’t appear (as far as I know – the chasers might know different) but I did get two ‘slightly distorted’ TX audio reports. This was due to shouting on my part, the mic. being too sensitive. I should have taken heed of the sticker I put on the mic. weeks ago saying ‘Don’t talk too loud.’ Once I backed off a bit the audio was perfect.

Very few of the stations worked were chasing SOTA, the WAB square or the trig point and I was not spotted once, though Nick G4OOE did offer. Neither did I try to spot myself as judging by the ‘S’ meter on the phone, it might not have worked. A spot wasn’t really needed as there came a steady stream of callers and I needed to control it at the end. In fact the activation controlled itself when all my customers were in the rally queue.

For me, this was an enjoyable prelude to the Rally whilst also giving the many mobiles heading for Blackpool something to work.

Next on the agenda. Ten days (3rd to 13th inc.) in Strathpeffer - GM, apparently to endure single figure temperatures. Hopefully there ought to be some SOTA or WAB all being well.

Thanks to ALL STATIONS WORKED including the twenty or so on the way to Blackpool. I had a great day; hope you did too.

Many thanks to the Rally organisers and the lads who manned the stands – volunteers, SOTA MT and WAB committee members. This was another enjoyable event. 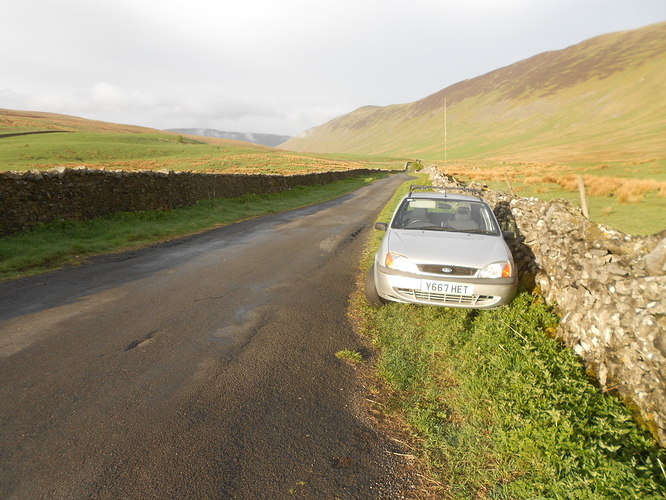 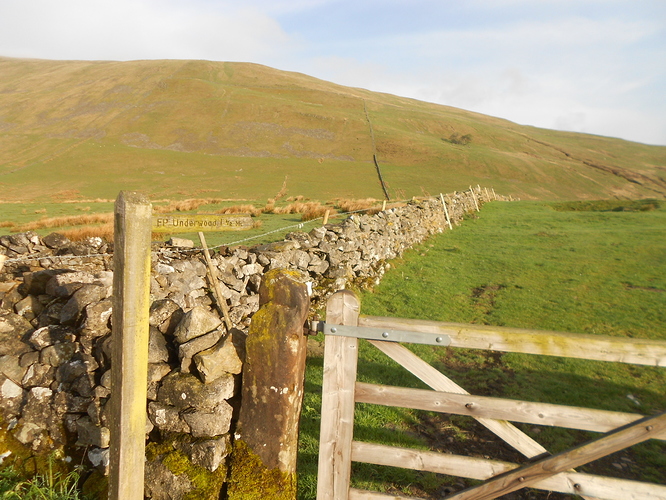 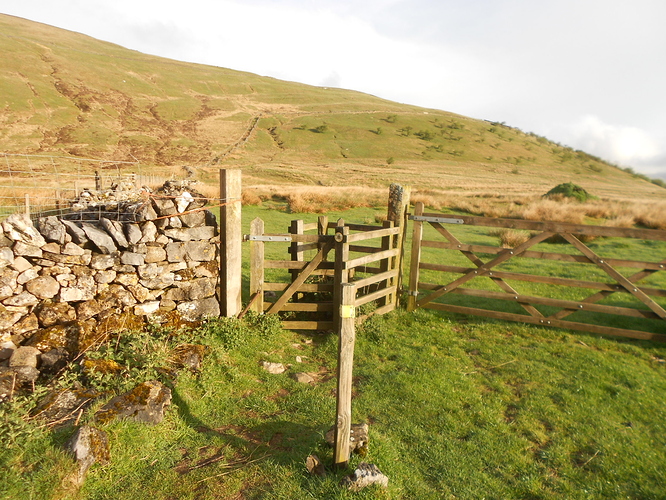 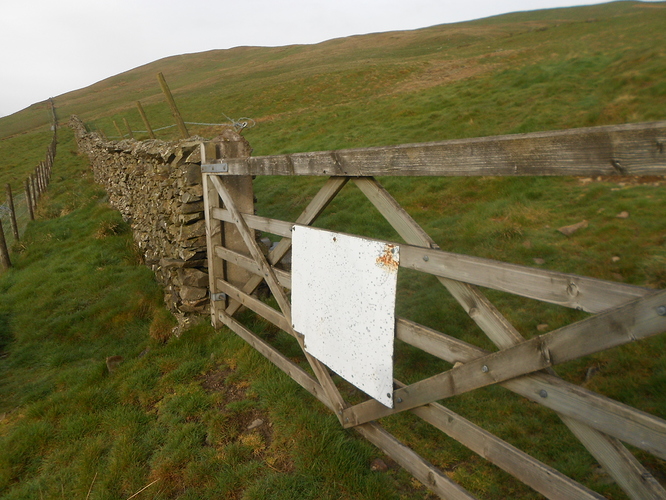 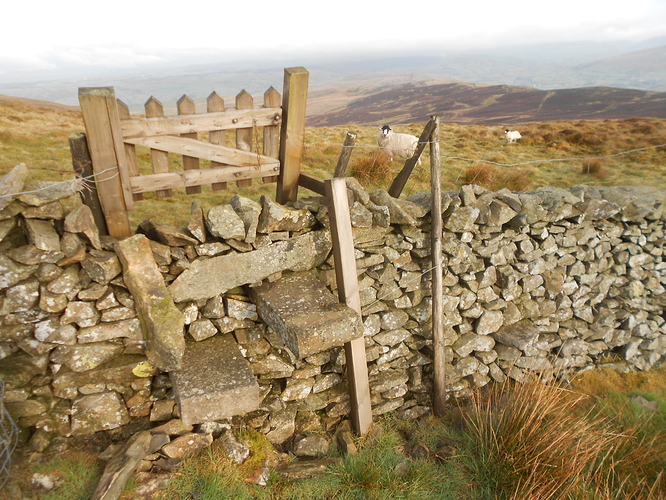 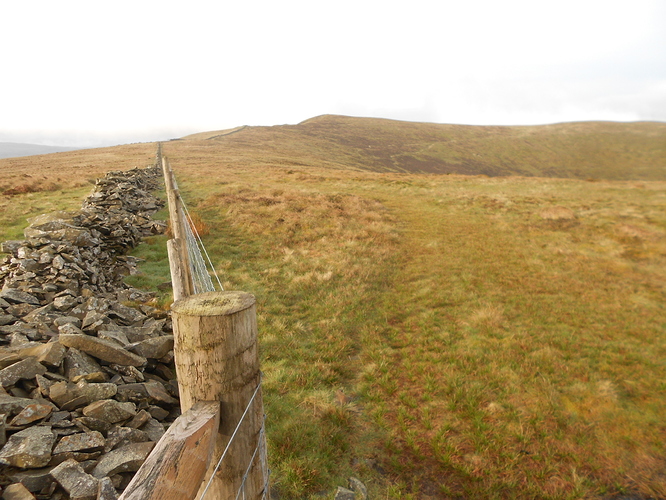 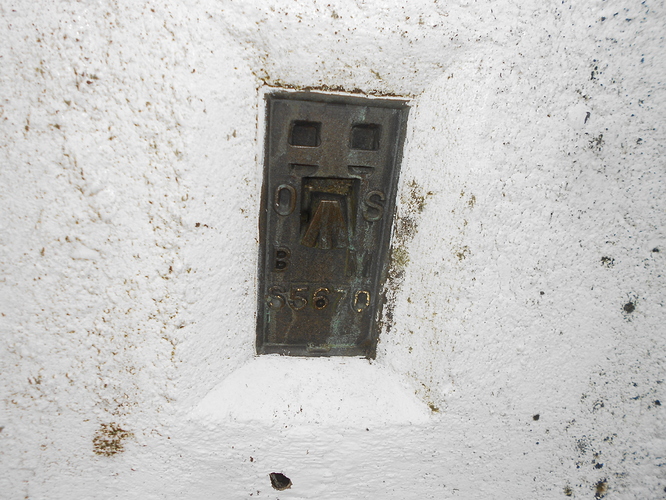 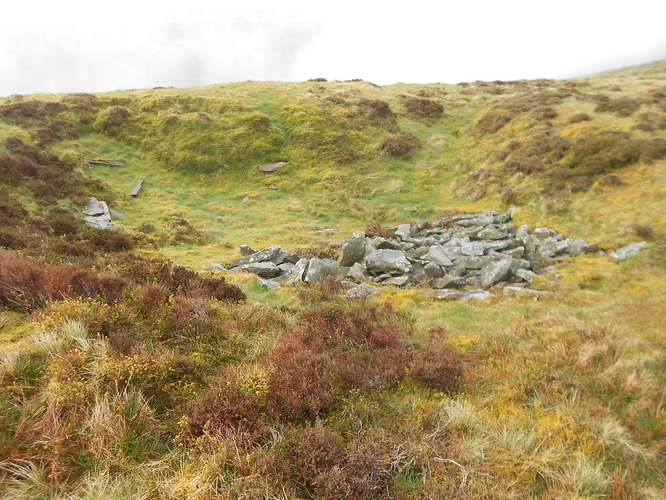 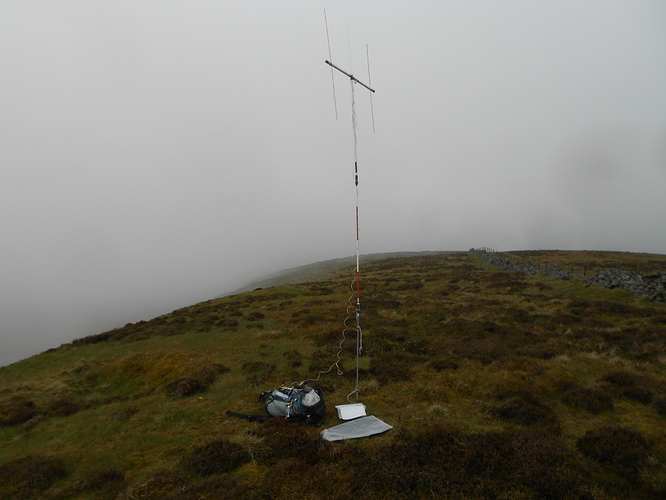 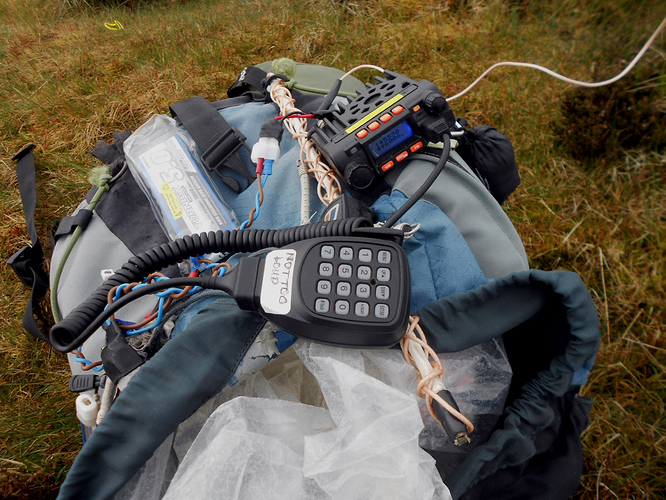 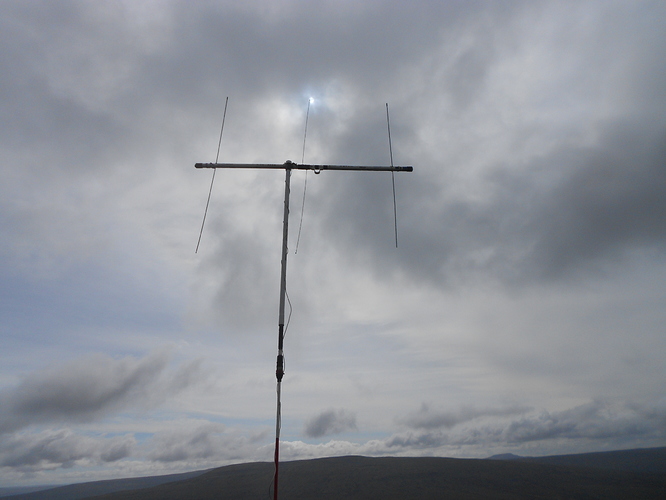 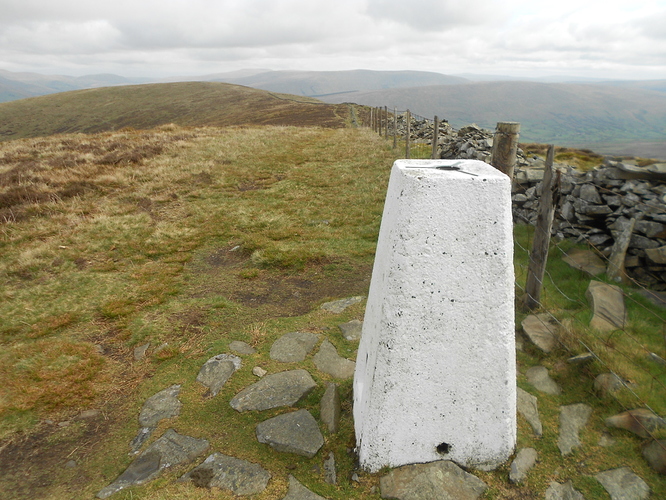 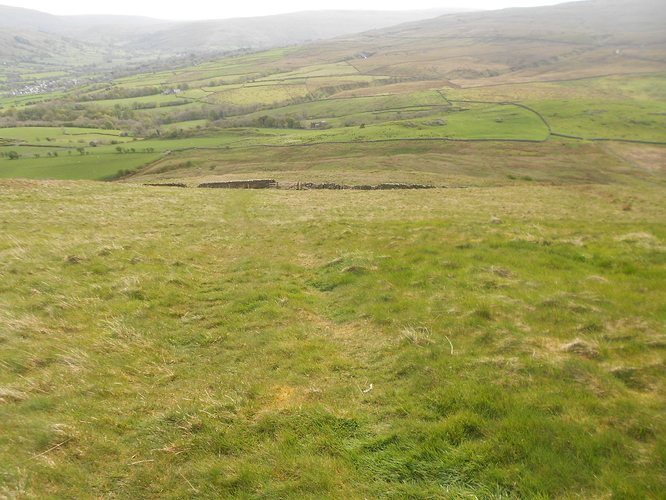 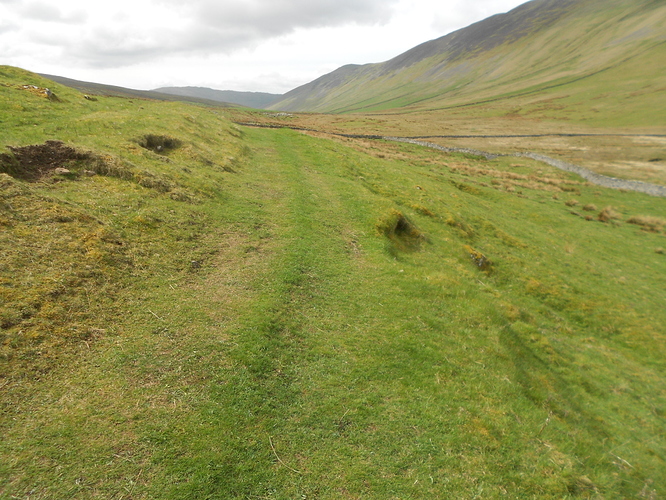 Please report errors in this report. There were plenty in the last one!

For information and photos of Blackpool Rally 2019, follow the link below:

The Blackpool Rally this year is held on April 28th at Norbreck Castle. This is one of the premier UK amateur radio rallies (hamfest) and there will be a SOTA stand as usual. We want to save money on shipping goods backwards and forward between Barry’s stock and the people manning the stand. Barry will be down in Central Belt this coming weekend and will be bringing me some stock to sell at the rally. Typically there will be the usual small stuff, badges, patches, car stickers etc. and a fewT-s…