My apologies to the many 2m fm chasers who tried to converse with me on Titterstone Clee Hill (G/WB-004) last Monday. Things went wrong from the moment I arrived by train in Ludlow and discovered my bus stop had been closed for 10 days for roadworks so my faint hopes of catching the train back to Hereford which was timed for the same minute (joined up thinking!) were dashed. I found another stop, wandered round for 30 mins and then sat (a seat!) at the bus stop for the Diamond L2 to Kidderminster which runs every 2 hours. When 20 mins late, the queue was restless and my hopes of the 1351 back from Cleehill village were dwindling - I really didn’t fancy the 2 hr wait up there for the next bus. Please note, when travelling by public transport the walking up the hill, making contacts etc may turn out to be a very small slice of the action!

The bus eventually arrived and 16 mins later I set off past the working (very busy!) quarry and out on to the common land. Not a route I’d used before and a GPS would have been useful to find the right track as I only had 60 mins to reach the top and set up. 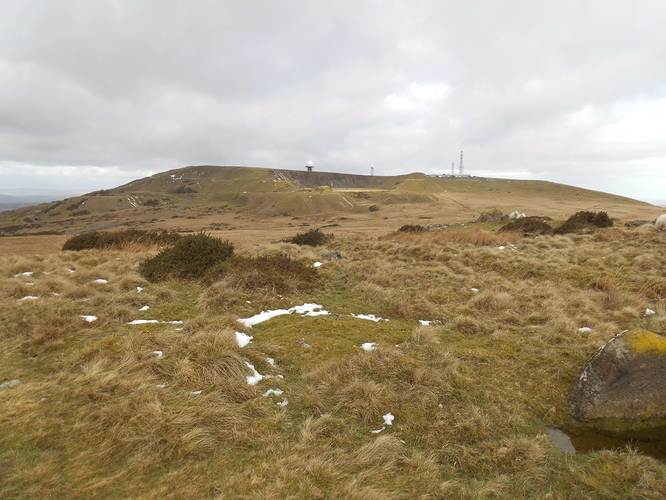 DSCI0469.JPG2592×1944 1.92 MB
Eventually I located the Shropshire Way, crossed the swamp and joined the road up to the usual parking area - with frozen puddles in places. A quick ‘sprint’ across the flat and a stagger amongst the snow patches up to the summit in the biting wind. I decided to use Rod’s (M0JLA) favourite spot amongst the rocks for a bit of shelter rather than my usual spot nearer the trig and in a small re-entrant on the eastern side. Mistake!! I was too busy shooing off the sheep to notice my near neighbours… 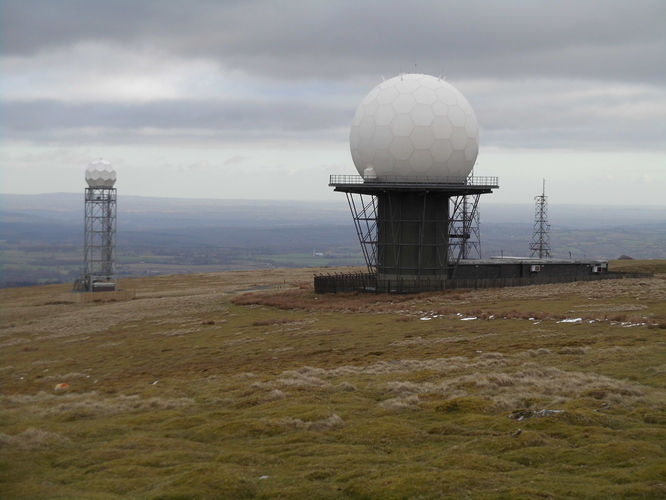 With frozen fingers, up went the dipole and I called at 1202 and received quite a few replies and jotted down some call signs. Another quick advert for 2m and 70cm( on 433 475) and down I went to 145.425 ready for a quick pile of contacts as I only had 20 mins (that late bus) to be on air. M0JLA came in but he was very distorted and barely readable, for the next contacts I was getting about half, to one-third, of the message and the rest blocked out. It wasn’t the usual silence that can occur (especially with a VX7) or loud noises when no-one was transmitting but a selective distorting of the replies. Moving up and down channels seem to make no difference and time was passing. Obviously the closer the callers were, and the more power, then the greater the chance of getting through. After struggling to get 5 contacts I moved to 433.475 and I was very relieved to hear 3 of my previous contacts (thanks M0JLA, G7HEM thanks for the spot!, M6NSV) come booming in, no problem at all - except that I hadn’t got a 4th. A quick CQ on the calling frequency and in came my secret weapon - G3XEV John in Sedgeley (does ANYONE else in Britain monitor the 70cm calling frequency??) Back to 475 and I’d got my 4th and M0NTC as well.

I had promised to try again on 2m but 145.425, 450, 475 had the same problem but I did get a quick contact on 500 (this seemed to be unaffected!) with G0MJY in nearby Kidderminster before the mast came down at 1220 and I reluctantly moved out from the boulders 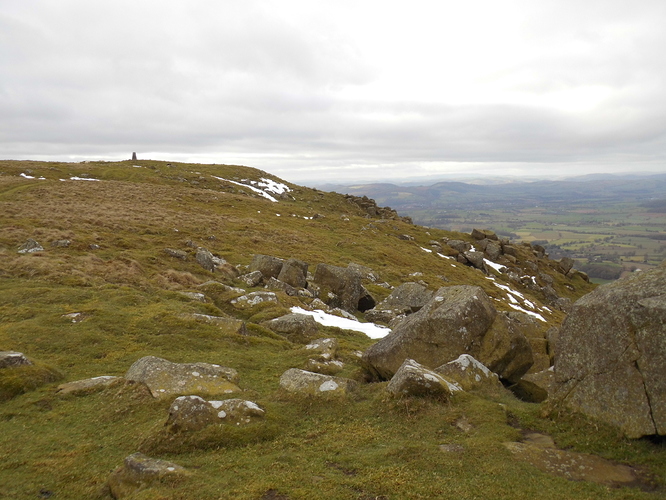 DSCI0471.JPG2592×1944 1.93 MB
and started back into the wind which was colder than I’d remembered. The locals say the radar station is there as it is direct line of sight to Russia and they can spot an object the size of a barn door flying above Siberia. I didn’t feel like disagreeing as I feel sure it was definitely a Siberian wind I was facing as I skirted the snow on the steepish slope, admired the old quarry workings 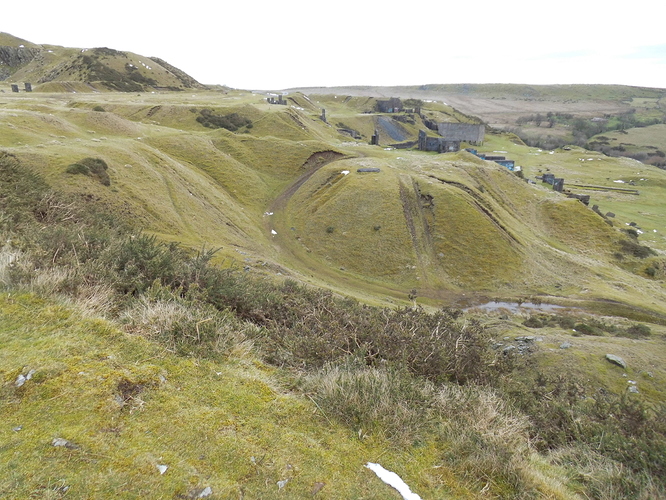 DSCI0472.JPG2592×1944 1.86 MB
and returned to my Cleehill bus stop for the 1351 bus. Arriving 20 mins early (I found the right way back as i could see the quarry!) and getting speedily very cold I hitched a lift to the railway station, spotted a train pulling in, sprinted across the bridge and hailed the conductor who held the train and arrived back in Hereford 2 trains earlier than expected. Phew, I suddenly seemed to move very quickly.

However I still feel guilty about those 2m chasers. I haven’t had this problem before on WB-004 but am usually just this little bit further away and down the slope. Has a new mast gone up within the last year - as I know someone else reported problems here a few months ago - or was it just the change in position? I do have a filter (but not with me) but have never considered it necessary for this hill. With hindsight, I should have disconnected the dipole and gone back to the stick antenna and seen whether I was high enough for that to get me the contacts. Now, where else can I get to by train or bus (I don’t drive and M0JLA is recovering from a knee injury)? Pole Bank (G/WB-005) and Mynydd Carn-y-cefn (GW/SW-014) are the only 2+ pointers which seem to be feasible from Hereford but i do need some decent weather as I may have to hang around for quite some time. I’ve already visited Sugar Loaf and Black Mountain (GW/SW-011 and 041) on separate frosty days and might get round to writing them up if it goes on raining for long enough!
Viki M6BWA

G0FEX
Hi Viki
A very well done on your activation in the face of the many problems you came up against, cracking photo’s and a lot of exercise for you, but it sounds as though you had a good day.
Well Done…
Ken

The locals say the radar station is there as it is direct line of sight to Russia and they can spot an object the size of a barn door flying above Siberia.

Seeing Siberia on L-Band from 4000miles away… as if.

It’s a UK ATC (commercial aircraft) RADAR run by NATS with an effective range of around 250nm.

It’s quite difficult to wander close to military units unlike commercial ones like this.

effective range of around 250nm

I looked at this and thought “is he being sarcastic?” Then I thought again; perhaps Andy is working in “old money” and this is nautical miles

Yes that’s the US symbol for nautical mile. It’s NM for the ICAO symbol. The SI accepts it as a valid unit apparently.

I can remeber my dad trying explain knots and nautical miles to me as a young child after it was mentioned in a TV program. I can never remember the miles to nautical miles conversion factor.

Not to be confused with the country mile!

If some of you have been wondering why I haven’t been out on the hills chasing Winter Bonus, I present the following answer. Flash flooding and days of rain has caused a number of large concrete pipes (450mm bore) to collapse under my lawn in front of my house releasing a lot of water to the surface. I’ve been busy preparing the way for my contractor to come and rectify the situation with plastic pipes. All the materials now on site but we will need a few days rain free…not looking good at the moment.

Not to be confused with the country mile!

Or the Scots mile.

“We think na on the lang Scots miles, The mosses, waters, slaps, and stiles, That lie between us and our hame.” [“Tam O’Shanter” - R. Burns]

Thanks for the write up & the photo’s, your outgoing signal was never affected & it was good to work you as always, I plan to do this hill soon, so will see how it goes.

“old money” and this is nautical miles

I can never remember the miles to nautical miles conversion factor.

Not being a hovercraft pilot nor do I

. However 1NM=2000 yards. Who said the Europeans invented round numbers? (They just perfected them

the Diamond L2 to Kidderminster which runs every 2 hours

That’s if you’re lucky…
At least 2 of them have caught fire over the past year!
And, I’ve seen at least 3 others that have have broken down at various points along the A4117.

Thanks for the info Don - I’m glad I didn’t know this before! The excuse given was a vague ‘suspension’ but I did wonder whether the few passengers would be asked to get out and push as we slowed to a crawl part way up the hill. Obviously my (successful) search for alternative transport on the return was a VERY good idea.

However things could have been worse as the bus service did still exist. I have just been researching buses from Hereford to Boxbush near May Hill. Getting to Ross-on-Wye seemed OK but then one of the travel websites gave me online info about when the next bus would leave Ross bus station and the time of arrival at the Farmer’s Boy inn. Luckily my internet research had also dug up a newspaper report for some time last summer stating that the residents of Boxbush and May Hill were up in arms as the bus route had changed and no buses came within a ‘country mile’ (that should start another discussion…) any longer. On checking on the Stagecoach West timetable and map it was obvious this was the case - and the ‘online information’ from Ross was about a year out of date. It would have been a longer wait than 20 mins for a suitable bus! I am glad to report that my chauffeur is starting to walk again and it may be worth listening out for me (or us) from Worcester Beacon on Friday c1600/1615 if the weather forecast stays good. I look forward to hearing you.