Its been a while since I last activated a SOTA summit and so I nipped up to Gun G/SP-013 Wednesday evening to try some 20m. The band has been in reasonable shape for a while and right now, the solar numbers don’t tell the whole story. A couple of nights ago, I activated a HEMA summit and worked 6 continents, sadly this wasn’t to be the case last night.

It was windy at the trig point and I immediately regretted my descision to take a 12m fishing pole. In the end, I lowered it slightly and then bungeed it into the now dead hawthorn tree. My first impression of the 20m band, it was well down on the reasonable conditions of the last 3 or 4 weeks. Seems my timing couldn’t have been worse.

After establishing a QRG at 19:50utc (the first of many, I was bounced off) I was greeted by a call from Ed DD5LP who spotted me on SOTAwatch and the DX cluster. Many thanks Ed.

The fourth and qualifying contact came from N1** in Massachusetts at 19:55. There followed quite a pile up from Europe, with a couple more North Americans calling in. Sadly, for the first time in weeks, I was unable to buy a contact into South America and I had no intention of wasting my battery, getting involved with the South American pile ups.

At around 22:00utc, Ernie VK3DET gave me a call from Melbourne, he was a bit early, but workable. About 20 minutes later, he called back and I sent him a 5/6 report. Rather surprisingly, this contact was made short path, it seems I was much weaker long path. Thanks for getting up so early, Ernie, much appreciated. Just one contact into VK. Unfortunately my good friend Ian VK3YFD had messaged me to say he would be listening, however, due to very high winds, he was unable to crank his beam up and what would have been a fairly easy copy, failed to materialise.

Ernie spotted me on the DX custer and this would normally result in a DX pile up, not last night though.

I plodded my way through more EU contacts until the band finally threw me a bone into North America. However, it was like pulling teeth, the deep and rapid QSB was extremely frustrating.

Finally, fed up with 20m, I pulled the plug.

There were 87 contacts for the Activation. All 20m ssb.

28 contacts into North America. 23 were USA and 7 Canada, the best of it, a SOTA chaser from Oregon.

All in all, this was a frustrating activation, spoiled by poor, band conditions, QSB and of course the inevitable QRM from the 20m zoo. However, no FT-8 required.

Thanks to all the callers. 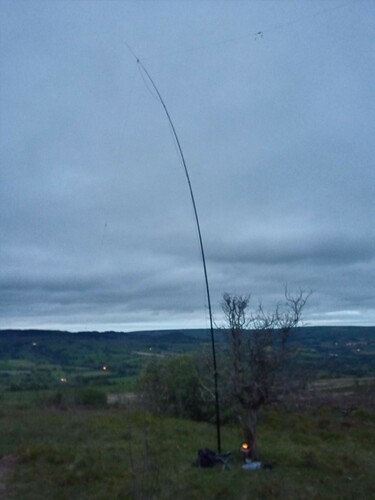 Only by your own high standards Mike. 87 contacts including a VK is still an impressive haul.

However, no FT-8 required

My advice is to restrict yourself to the modes you enjoy operating with.

Hi Mike
I was unable to look for you when i saw your spots. I was rather surprised by the timing which is not a problem in this part of vk as 2200 utc is 8am, about an hour after sunrise at this time of year.
Anyway well done on your log for this activation. A tally that I would be delighted with.
73 Andrew VK1DA/VK2UH

One of the problems is the small window available for portable stations between VK/G right now. I’ve been working Ernie a couple of times a week both your morning and evening. If you held a gun to my head, I think I’d go for your morning as having the edge. However, things seem to change all the time. A month ago, Ernie wouldn’t have heard me short path. I know Ernie keeps immaculate records of all our contacts and he might care to comment.

The power stations seem to be much less affected by conditions, but they’re not immune either. Small portable stations working with bits of wire have to get their timing right.

It seems like a long time since we used to chat summit to summit with very little power. Hopefully, the bands will continue to improve and those days will return.

A nice haul of contacts Mike. I was going to set up in the back garden and try and work Ernie, but Hayfever had hit me in the head. I was pretty much a Zombie!

Hope to get out on a SOTA summit soon a do a bit of HF dxing.

Thanks for those observations, it is an iceberg problem like many others in radio. Finding the time when conditions improve sufficiently to make it work is quite an art. Yes it is a long time since we could work s2s. It will happen again, looking forward to it.