We needed an early start so just grabbed some toast and tea/coffee before leaving the holiday cottage around 7am. We were booked on the 08:40 ferry from Lymington which had a check in time of between 7:40 and 8:10. We weren’t sure how long the drive would take, so had our main breakfast of fruit & muesli packed in containers which we intended eating in the car as we waited. The roads were quiet, and we arrived at the ferry terminal just before 7:40. A bit early but we might as well head to the unattended check-in booth to wait, but as we drew up we saw someone further down waving us forward, so we drove forward, he scanned our ticket and directed us straight onto the waiting ferry. As we got our stuff out of the car the ferry prepared to leave, and we realised we had caught the previous ferry!

We headed up to the passenger lounge at the front of the ferry, so we could eat our breakfast sitting at the table looking out to sea. It was still misty – we could see the Isle of Wight from Lymington but it was hazy. In our rush to get out of the car we had forgotten our cameras, but it was too hazy for good views. We had thought that timings might be tight to spend a reasonable time on both summits and get back for the 18:05 return ferry (it would be getting dark before 5pm), but the extra hour made it a bit more relaxed.

Our first target was St Boniface Down, and being averse to drive on summits we headed for the Smuggler’s Haven car park at SZ581789. We headed up the steep grass of Nansen Hill – the car park had been empty and the only other people about seemed to be dog-walkers. The mist seemed to have worsened so views were limited. We headed over Bonchurch Down, contemplating activating on the open area near the car park, but carried on past the true summit (just inside Radar Station enclosure) to the trig point. The car park next to the trig point was busier, but we assessed that we could set up near the ruined buildings on the opposite side of the road and still be within the 30m of the trig point in case WABers wanted the trig. VHF conditions were interesting: on 2m FM Caroline didn’t work any locals at all but did work 5 stations in the Midlands (Birmingham / Nottingham / Chesterfield area). Martyn had a good run of 22 contacts on 5MHz, and we then swapped stations for Caroline to have a good run of 52 contacts on 7MHz including a difficult S2S with HB9BIN who unfortunately faded into unreadability before Martyn could also get the S2S. Martyn flipped the 2m dipole horizontally and 7 contacts on 2m SSB – the furthest being Liverpool. Given we wanted to do a second summit we didn’t do any other bands, and retraced our steps – the mist unfortunately getting slightly thicker rather than dispersing as forecast. 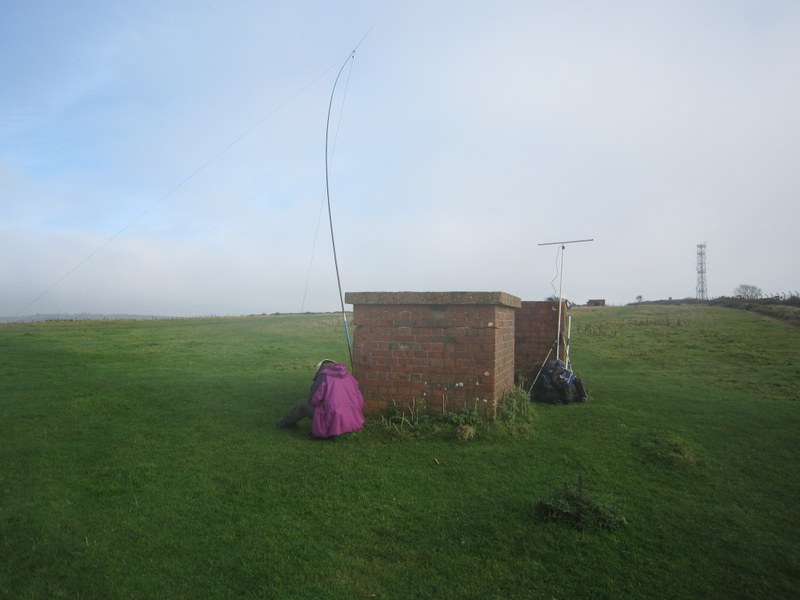 Our route to the parking for Brighstone Down ended up being rather circuitous – two road closures forced us round back roads, so we got a view of the outside of Carisbrooke Castle. The car park at SZ420845 was reasonably busy, but most people seemed to be heading west over Mottistone Down. Our route was east along a pleasant byway with views to the south, before turning more north to the track which led towards the summit. The trig point was off this track down a narrow gorse and bramble lined path. The trig point was on a small mound and provided something to strap the VHF antenna to, but where could we get HF up? It seemed quiet, so Martyn somehow managed to prop up the pole in the brambles, and run the antenna linearly along the path. VHF conditions weren’t quite as good as earlier, with the highlight being an S2S with Allan GW4VPX on Cyrniau Nod, and well as enough local contacts to qualify the hill. After Martyn had qualified the hill with 12 contacts on 5MHz, Caroline took over for a run of 19 on 7MHz while Martyn rustled up 4 contacts on 2m SSB. We had enough time for Martyn to do 20m, but we had to manage to get the antenna down to change the links and back up again – somehow we managed that without too much damage to us or antenna! Martyn was rewarded with 13 contacts including one transatlantic. 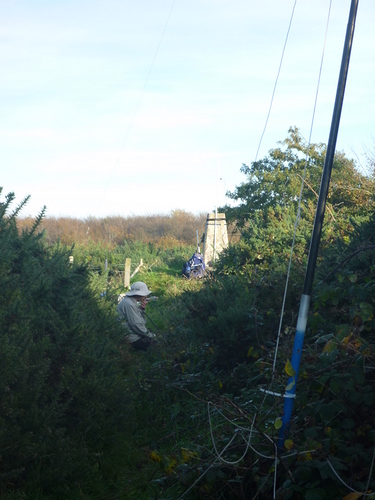 When the calls dried up we packed up, and thought about doing a circuit of the track surrounding the summit, heading north to SZ431849 where there appeared to be a small clearing which would have been better for HF (but not good for VHF). However, the track east we had seen on the map appeared to be too overgrown to be passible, so after some futile fighting of vegetation we retraced our steps. Back on the main byway, we calculated we just about had enough time to divert up to the Limerstone Down viewpoint. As we dropped back down from Limerstone Down, the mist which had cleared while we were on the summit was returning, giving some atmospheric views into the setting sun. We drove round the coast road in the fading daylight for some final views, getting to the ferry terminal about 10 minutes before the official close of check-in. A good day on the island. 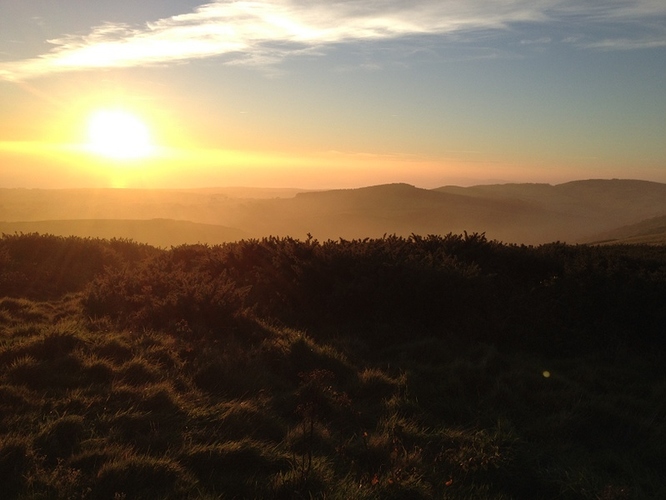