We again left the holiday cottage in fog, which slowed driving progress, but started to clear as we passed Portsmouth. However as we headed up the A3 towards Butser we were suddenly back in the fog. We parked in the Visitor Centre car park just after 10:30. We had heard that Butser required permission to operate radios, and had obtained permission beforehand, and remembered to take a copy with us. In the end nobody asked, but better safe than sorry.

We set off along the South Downs Way, with the fog swirling this way and that, sometimes blue skies and views, sometimes fog. As we started to climb it looked like the fog was heading away east and we had some reasonable views. This boded well for views from the top. However, as we headed towards the radio station we headed back into thick fog. We located the trig point which had a slightly raised concreted area with metallic top nearby: the latter made a good seat/table for the HF station. Although there was nobody else around at the time, Martyn needed to make sure the HF antenna didn’t cross the paths, while Caroline lashed the VHF antenna to the trig point. The forecast had been for the fog to lift and we knew that it was sunny only a few hundred metres away. We were out of luck: the fog persisted throughout the activation, though we were wise to avoid the paths as quite a few people came by, mostly accompanied by dogs. 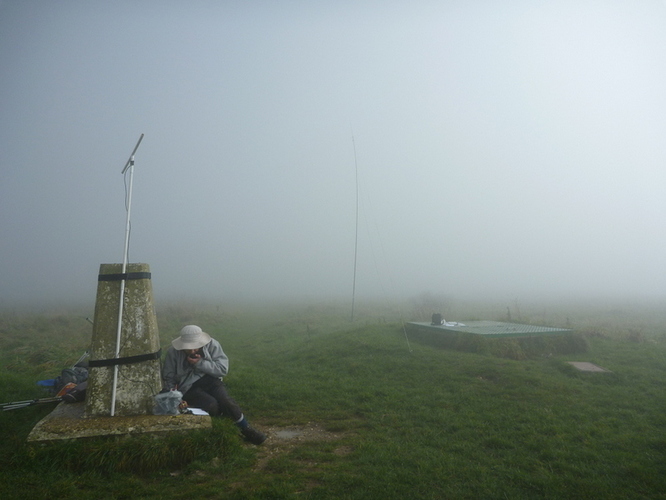 We both had reasonable runs on our initial bands: Martyn getting 14 contacts on 5MHz and Caroline 9 on 2m FM, though we interrupted the runs to grab a 7MHz S2S with Glyn G4CFS on Burton Hill G/WB-020. We swapped stations, for Caroline to get a pleasing run of 34 contacts on 7MHz, while Martyn managed 3 on 2m SSB. Another swap gave Martyn 17 14MHz contacts with 3 transatlantic. We both grabbed an S2S with HB9BQU/P. A quick listen on 28MHz suggested that there was life on the band, but a self-spot yielded only one strong Portuguese station despite several minutes of calling. With no sign of any break in the fog we packed up and headed back past the radio station and back into bright sun under blue skies: such a contrast over a short distance. 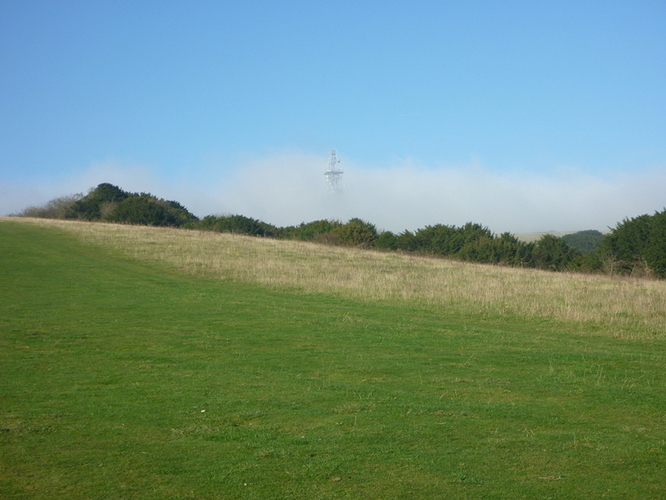 just wondering how or who you go to , to obtain permission to operate from this summit ?

Click the magnifying glass (ringed in red on the image below) and type Butser Hill in the box. Read how other people got permission and activated it.

You have the great advantage that we have huge amounts of personal activation/chase history and massive amounts of technical discussion regarding antennas, radio, batteries etc. on this site now. The search feature lets you find what has been said to help you get up to speed without having to make many of the mistakes or doing it the hard way of the early SOTA days.

Unlike my first attempt, I actually got a response this time a month ago (from a lady called Tracy). No problems with the permission, but sadly a friend’s funeral intervened

I will activate it one day

Thanks , i will send a email before hand and see what the outcome is . Sorry to hear that hopefully you will activate it soon