Evening of Thursday 24/3/16 travel from home QTH to Haltwhistle, B&B and met up with a friend who lives in the town.

Good Friday 25/3/16
Started with G/SB-005 Sighty Crag. Mountain bike from usual parking spot at “The Loan” NY 561 785. Rode/walked to hairpin on the track at NY 587 808. Left the bike here and walked through the forest ride to cross the fence (step over - no barbed wire) at NY 588 810. Up initial steep climb over rather unpleasant steep boulder covered heather before flattening out. Then it was a case of find the best route through the heather and small streams to the summit. Not too bad, I’ve been up worse! Six 2M FM contacts all 5W into a vertical dipole. Returned by same route.
Drive to G/SB-004 Peel Fell. Mountain bike from NY 608 963 to NY 614 988. Left the bike and followed the obvious path that goes through the woods to reach another path on the England/Scotland border. Follow this to the summit. Pleasant walk, if rather windy. Scraped the bear 4 2M FM contacts all 5W into a vertical dipole. Returned same route.
Dinner in Anglers Arms - Kielder Village
Drove to B&B near Wooler.
Photo: Sighty Crag G/SB-005 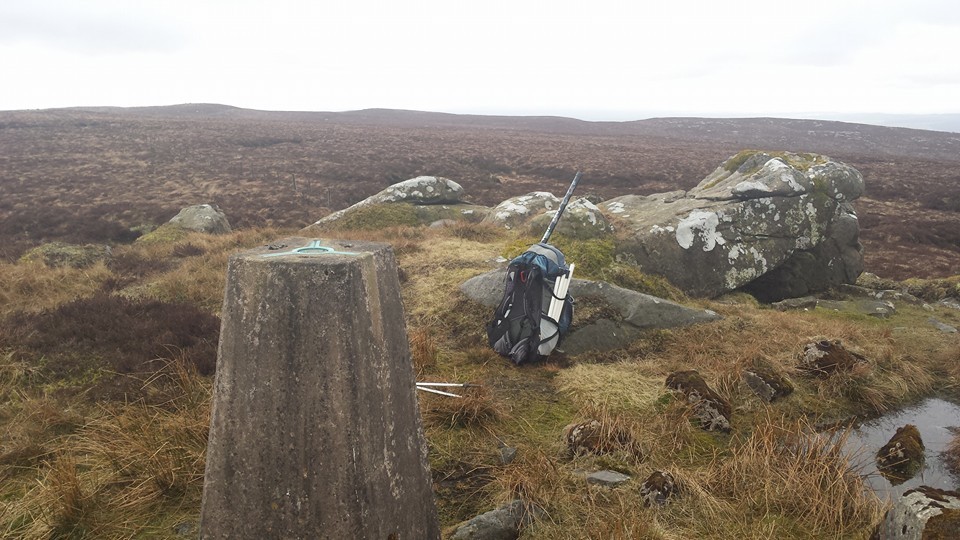 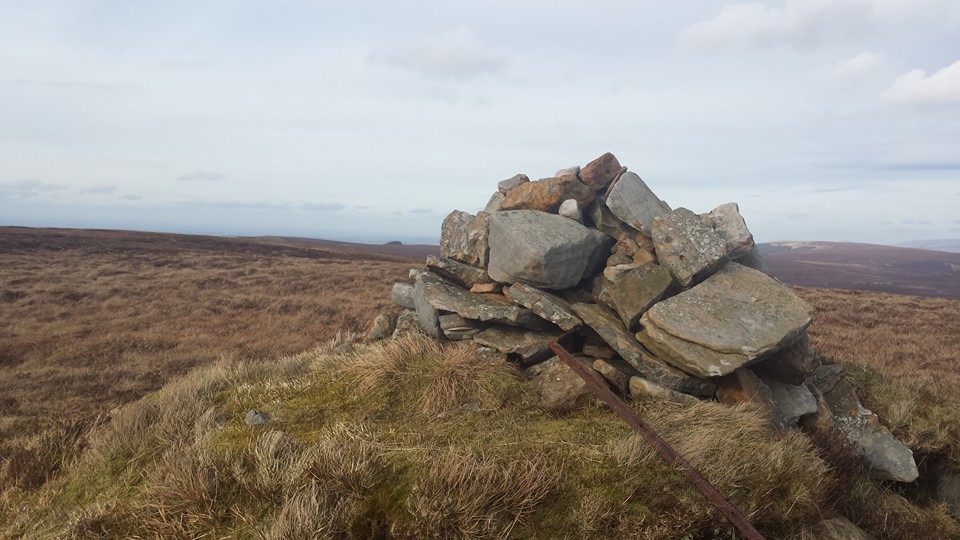 Saturday 26/3/16
Poor weather forecast with high winds, so picked some of the lower hills with some tree cover.
G/SB-008 Long Crag from NU 092 069. Avoided parking right at the end of the forestry access road as there were signs requesting people left the space free for turning lorries. The woods are currently being harvested. Not much activity on a Saturday, but one harvester machine was in use (heard but not seen!). Rode mountain bike to approx NU 070 066, some “single track”. After this walked to summit on reasonable paths. Again scraped 4 2M FM contacts all 5W into a collinear. Returned same route. Stayed dry, but rather windy. Edit: I should have mentioned that this was Sue’s first SOTA summit with me since she broke her ankle in October. In the end she did two summits on this trip.
Drive to G/SB-007 Tosson Hill from NZ 037 996. Mountain bike to NZ 018 988 where it became unlikely I could ride down the route due to my basic mountain bike skills and big rucksack on my back. The rain started about this time, accompanied by a much stronger wind. Walked to the summit, reasonable path, but boggy in a few places. Cowered in the summit circle and at one point had to lower my antenna as I thought it was going to break the support pole. Horrible cold, wet and strong wind. Why do we do it eh? 7 2M contacts all 5W into a collinear. Returned same route.
Drive to G/SB-009 Ros Hill. Horrendous rain on the drive over didn’t bode well. But I sat in the car for a few minutes until it eased a bit. Walked the short path to the summit from NU 079 249. It stopped raining completely on the way up and I was rewarded with a dry (if windy again) activation. 5 2M FM contacts all 5W into a collinear. Returned same route and just reached the car in time to beat the next rain band - what luck!
Photo: Long Crag G/SB-008 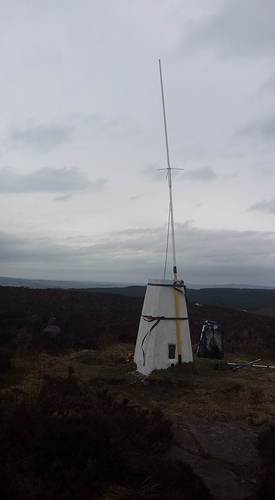 No photos on Tosson Hill… due to horrible weather. 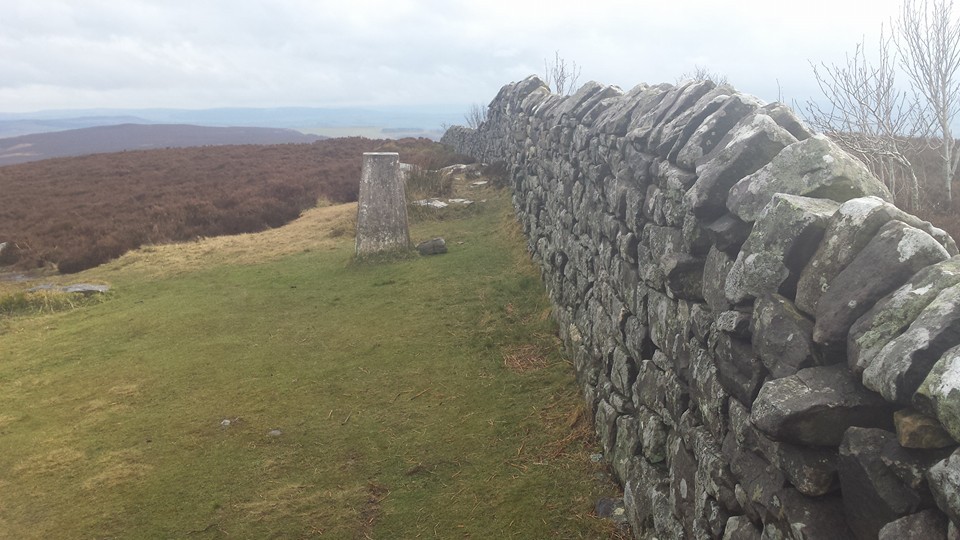 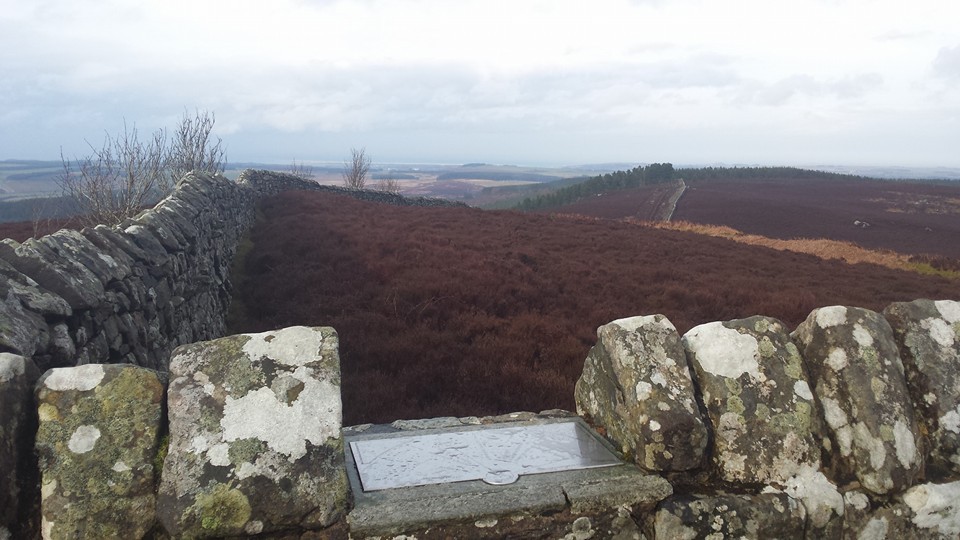 Sunday 27/3/16
G/SB-006 Shillinghope Law. Parked CP at NT 866 103. Crossed river by footbridge and went north to track fork at NT 870 108. Followed this track south to the summit. Mostly dry. Very windy on the summit but just a short shower. Scraped the 4 2M FM contacts on 5W into a collinear. Return same route
G/SB-010 Housedon Hill
Parked end of public road at NT 894 323. Walked track (not access land or public right of way, but most obvious route) to NT 897 326 where I crossed into access land via a gate. Walked almost straight to the summit which doesn’t appear to have any sort of marker. Very windy activation spot as I couldn’t get any cover. 1 2M FM contact on 5W, then called and called and called… so gave in and got the bigger guns out… made 3 more contacts on 2M FM with 40W. All using a collinear. This also marked by 200th Activator unique.
Photos: Shillhope Law G/SB-006, none on Housedon Hill. 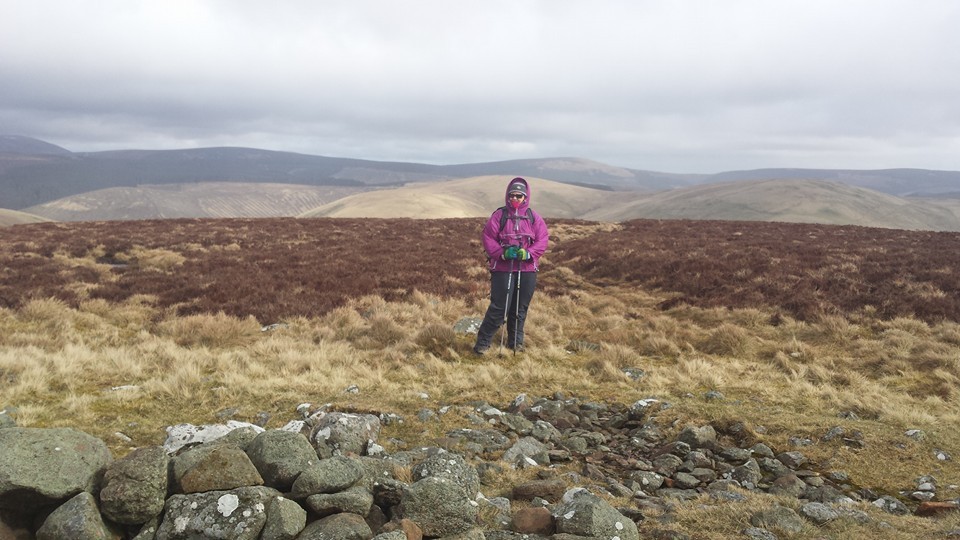 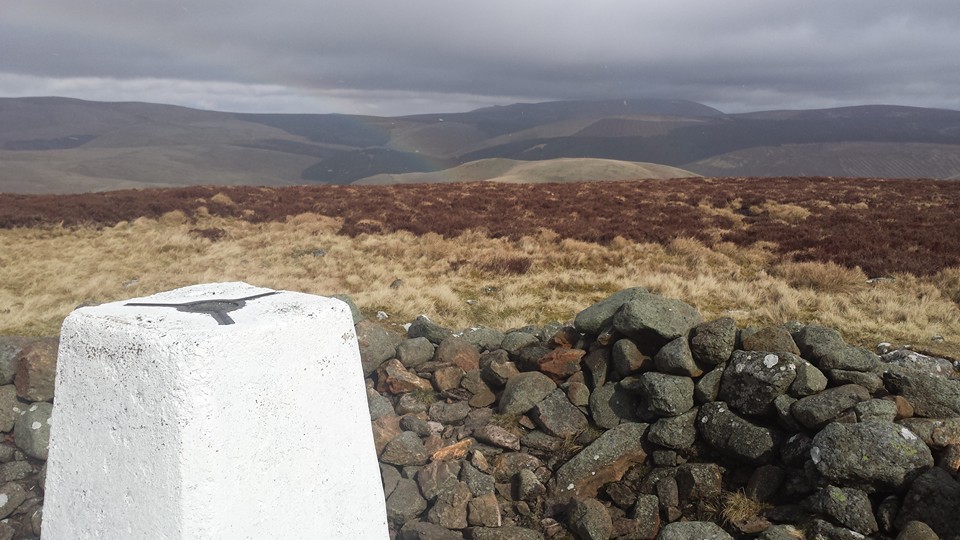 Monday 28/3/16
G/SB-001 The Cheviot. I’d been kept off this one for two days by high winds and threats of lightning! So last chance today to complete the set. Fortunately while southern England was being pounded by Storm Kate I was in much lighter winds. Simple (if wet and boggy) walk to the summit from NT 952 224. Fresh snow and rime ice on the top. Cloud lifted during my time on the summit. 5 2M FM contacts with vertical dipole. Very nice to get a couple of “summit to Wainwright” contacts in G/LD. Returned same route before the long drive home to North Wales.
Photos: The Cheviot G/SB-001 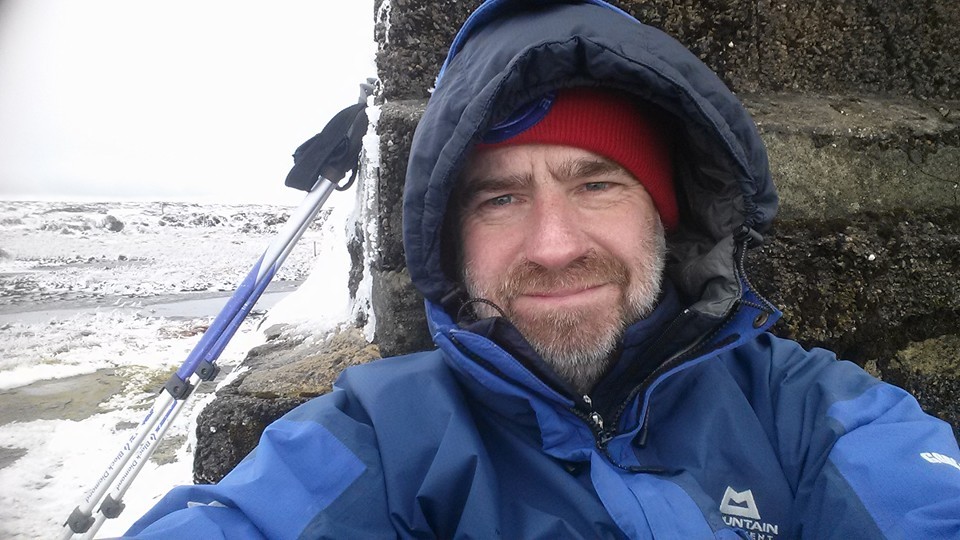 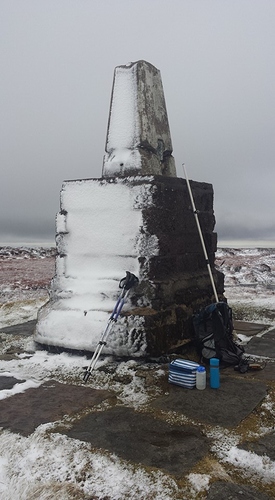 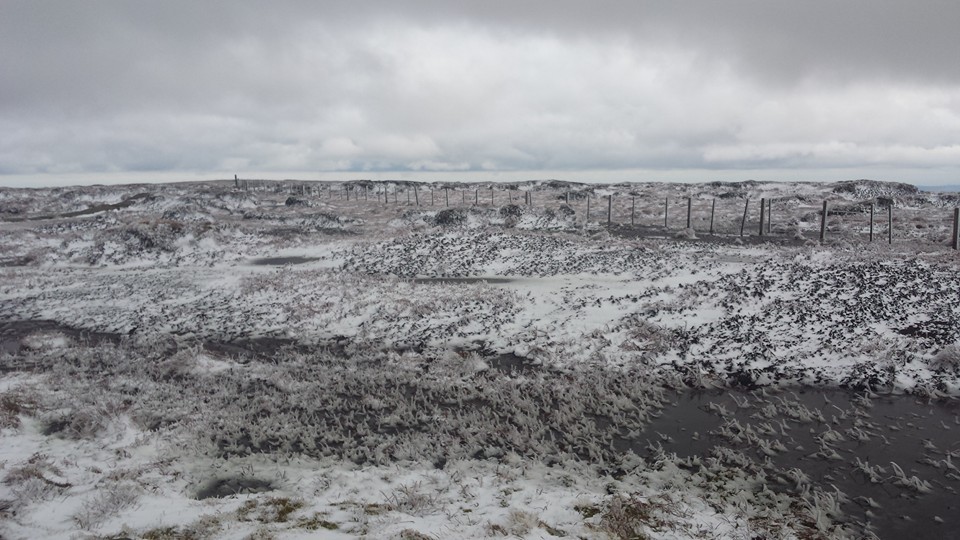 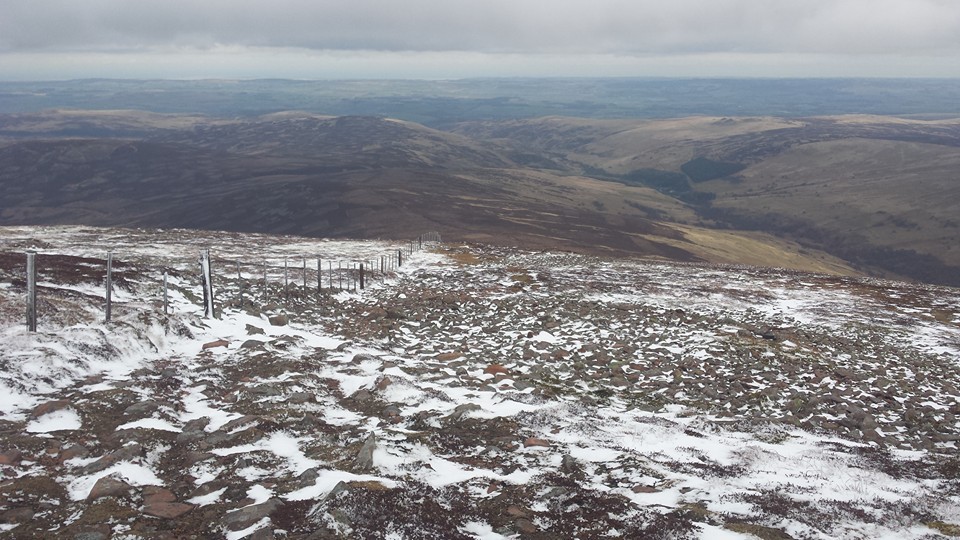 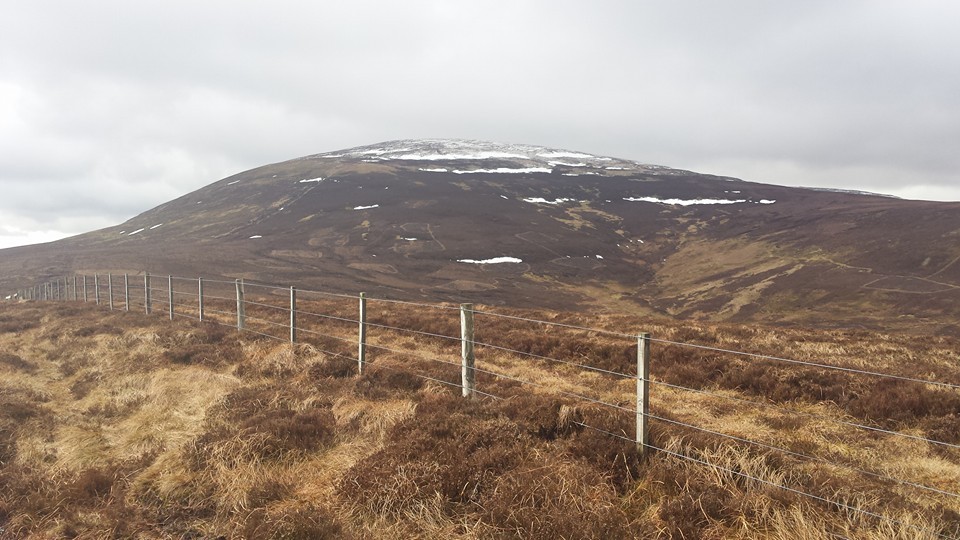 Super effort Gerald, well done on the speedy completion. As I mentioned, I really did find those summits relatively strenuous. They were either long, or steep, or over horrible terrain - or in the case of Sighty Crag - all three! Lake District walking tends to be much easier!

It feels much more like Scotland than England! I really enjoyed the walking.

Thanks for the report Gerald…no pics? … I’m sure I’ve seen a few somewhere

Oh go on then…

Added a few to the original report.

I did G/SB in "three and two half " days - drove up after work and did Ros Castle that evening, and finished on Sighty Crag four days later then drove home. Hard work but very satisfying! Without a bike too, but that probably was an advantage to me :-s

Bike made a BIG difference. Saved a lot of time on the four hills I could sensibly use it on.

I drove home to North Wales after The Cheviot yesterday. A wee bit tired when I got home!

Well done Gerald, sorry I didn’t get to work you from LD

Thanks Gerald…nice to see that the ‘back up team’ is better…regards to Sue.