The forecast was for a fine start with showers later. There was broken cloud and some blue sky as we had breakfast. We decided to try to do the Fountains Fell and Pen-y-Ghent pair and had good views of Ribblehead viaduct, Whernside and Pen-y-Ghent as we headed south through twists of Horton in Ribblesdale and through Stainforth. We drove up the single track road to the grassy roadside parking for Fountains Fell just before the cattle grid. We headed up the Pennine Way, in lovely walking weather: it was wet underfoot at the start and in places on the angled incline but no significant problems. We had good views of Pen-y-Ghent and the walk was made more pleasant by the accompaniment of the sound of Curlews and Lapwings at lower levels plus the odd Grouse.

Given we wanted to do two summits and wanted some shelter from the wind, we decided to operate from near the wall crossing the Pennine Way, rather than from the true summit – above the 650m contour this is well inside the activation area. Caroline set up by the wall using a fence post to support the MFD: it was not very sheltered as the wind was running along the length of the wall, and she struggled to get 2m FM contacts – eventually getting 4 contacts after about 25 minutes. Meanwhile Martyn’s HF setup was more sheltered in a dip from the remains of old mine workings, and had a good run on 5MHz getting 20 contacts. Caroline briefly went on 40m to try to make her log more respectable, getting 10 contacts over 7 DXCCs in just over 10 minutes. As we packed up a man appeared carrying a drone: an archaeologist who had come to survey the mine workings – evidently coal mining which ended in 1840s as cheaper coal became available. He went off to do a different area while we packed up. We headed back down, getting back to the car just after 1pm. The timing of these two summits made fitting lunch in awkward, so we ate some Hot Cross Buns before leaving Fountains Fell. 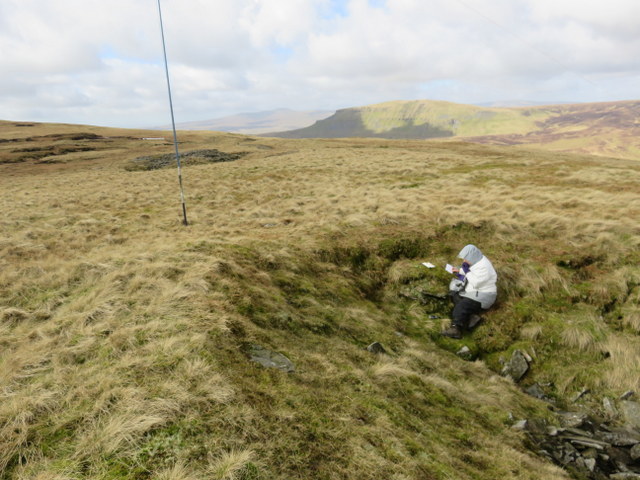 Operating from within old mine workings on Fountains Fell, with Pen-y-ghent behind

We moved the car to the parking by the “honesty box” parking near the cattle grid where the Pennine Way leaves the road for Pen-y-Ghent. We loaded up, put £2 in box and headed up the Pennine Way. Cloud had now replaced the earlier sun, and as we headed up it started to rain. We stopped to cover up, and soon after the rain stopped again. We carried on for a bit but were soon overheating, so had another stop to remove waterproof top layers. We needed to top up our energy levels with a Mars bar before tackling the steep section with some awkward scrambly bits.

It was cool at the top with surprisingly few people, so we made our base in the shelter on the same side of the wall as the trig point (we had been on the other side on our last visit!). We consumed a late lunch. Caroline set up the Multi-function dipole propped to project above the shelter, but as soon as she asked “is this channel in use” she realised something wasn’t right – the FT-817 showing high SWR. She checked the antenna and reconnected things, but still a high SWR. OK, let’s try propping the end fed halfwave rucksack antenna above the shelter instead: a high SWR there too. Caroline called Martyn over from setting up the HF antenna to see if he could see what was wrong, but both antennas still gave high SWR. OK, fish out the Diamond RH770 whip antenna, attach to the FT-817, and finally a sane SWR. It’s awkward using the FT-817 trying to hold it up high enough to get the antenna above the shelter, while still trying to operate the microphone and log at the same time, but it looked like the only option. After finally being able to transmit Caroline pretty quickly got 8 contacts on 2m FM. The dual band antenna made it easy to accommodate a request to try 70cms which led to a run of 9 contacts before that dried up and Caroline went back to 2m for another 2 contacts. Martyn having made 21 contacts on 5MHz followed by 8 contacts including a Canadian on 20m, Caroline moved to 40m, but only managed 6 contacts before it was time to pack up. The weather had brightened again while we were at the summit and we had a pleasant walk down – an excellent day on the hills. 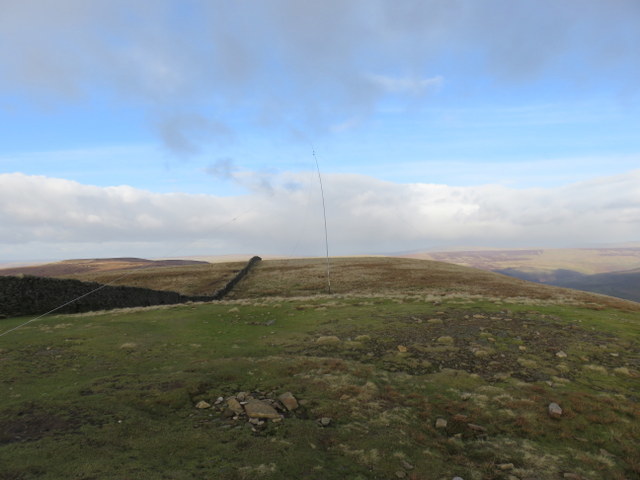 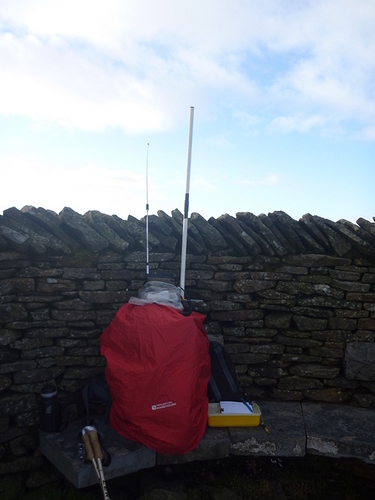 FT-817 with whip antenna for VHF/UHF: I was trying to hold it above the shelter when operating!