I was scheduled to transport my older daughter, 2E0DGM, to Zennor on Friday 1st September in readiness for her return to uni in Penryn and therefore I took the opportunity to activate G/DC-008 en route and complete the G/DC region again. I have previously activated G/DC-004 so I was familiar with the layout of the land but I am much indebted to those who have recently surveyed the AZ of G/DC-008 and its overlap with access land and published their detailed findings on the reflector. There is no indication on the ground of the limits of the access land and so the maps, diagrams and photos on the reflector proved invaluable.

I parked at the usual parking spot at SW992575 where there is space for a small number of cars and took the obvious path from the car park which leads to the trig-point on Hensbarrow Beacon. Discussion on the reflector indicated that a suitable activation spot could be found on a bearing of approx. 102 degrees from the trig-point. The following image shows my fishing pole pointing in this direction. The route taken is on the left of the trig-point in this image. 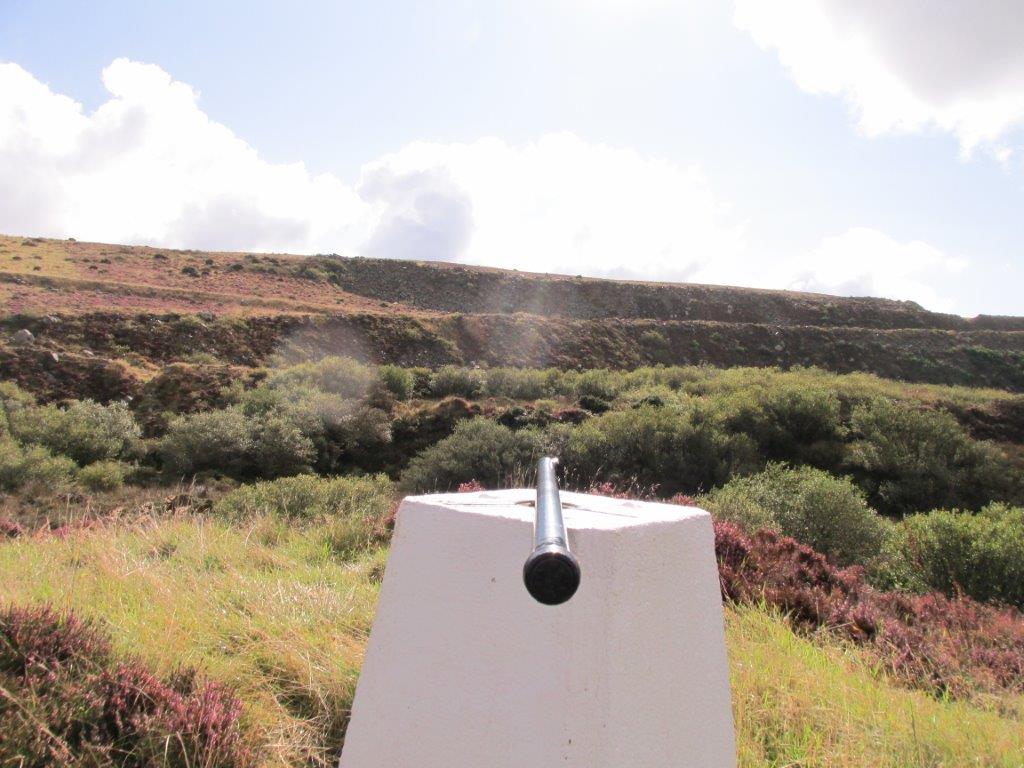 Follow the faint path over the rough ground (long trousers are recommended unless you don’t mind the prickles!) to the obvious gap in the bank of the trackway. Once the trackway is reached, turn left and follow it around the hairpin bend.

The image below shows the trig-point from where the path meets the trackway. 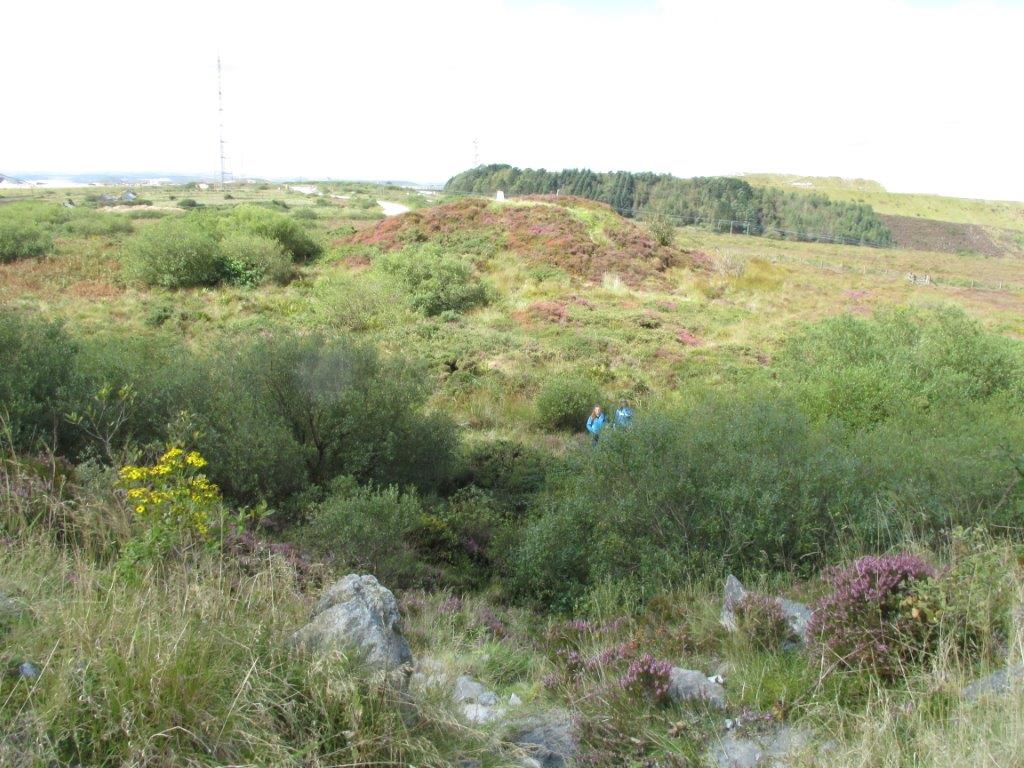 The next image looks back down the trackway; the path to the trig-point leaves on the right. The trackway is in use so keep to the edge. It is frequented by dog walkers and I was passed by a site worker in a pick-up truck who gave me a friendly wave so there is no problem with members of the public being on the track as far as I could tell. 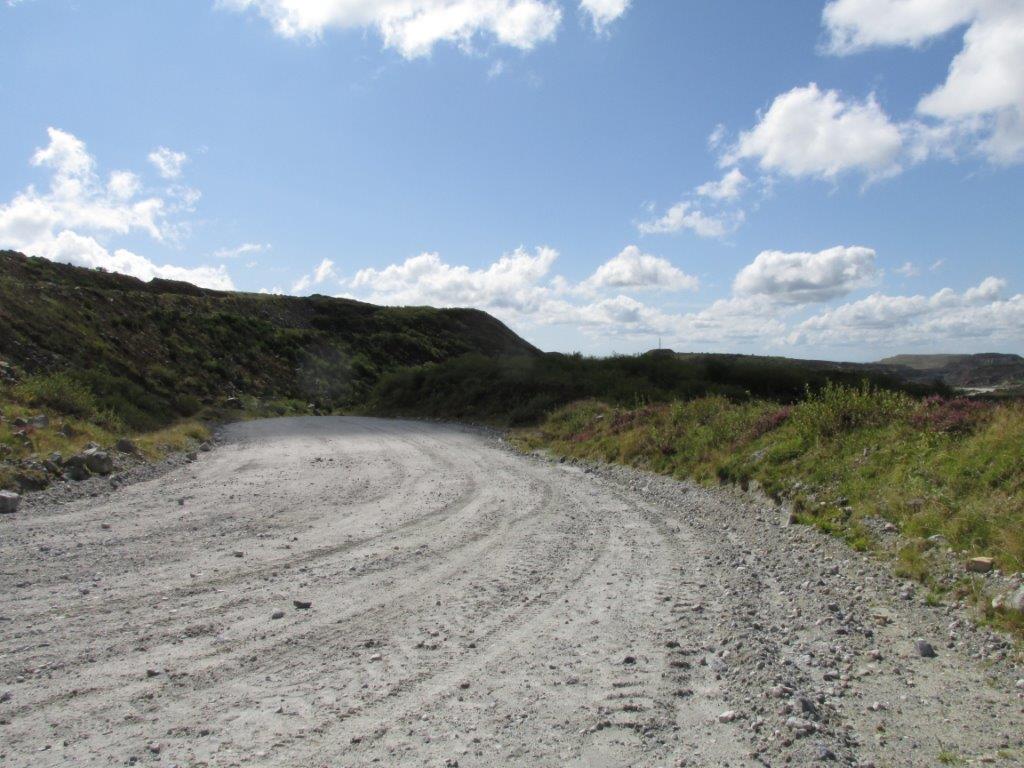 The next image is taken on the hair-pin bend and looks up the track. Note the track which joins on the left, running downhill from the left of picture. This is where one is heading. 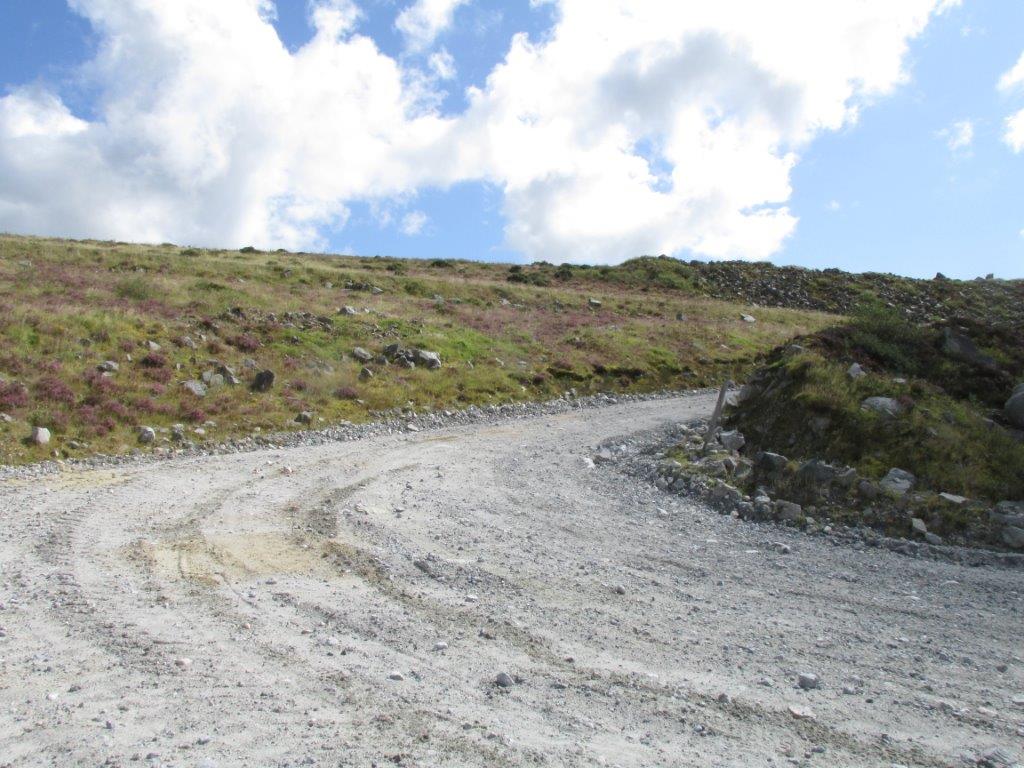 The next image shows this track, which is disused and therefore has grass coming through. 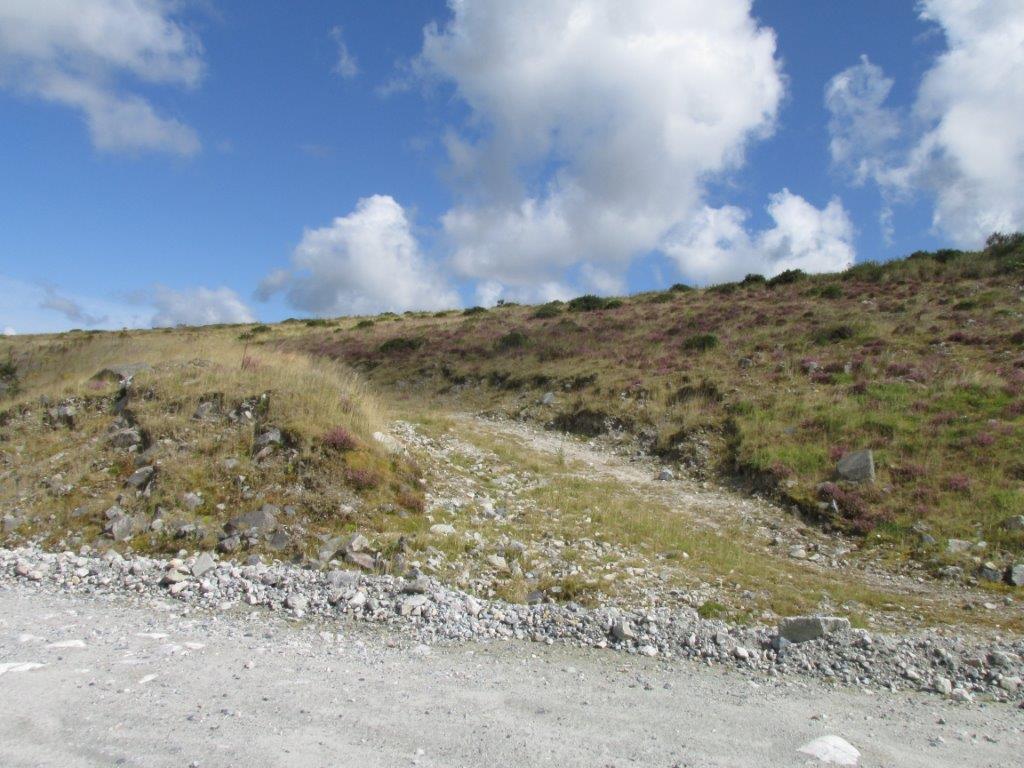 IMG_2584.JPG1024×768 122 KB
Follow the grass track for about 100m and then turn about 90 degrees right and head straight up hill. As one heads up hill, the two stones pictured on the reflector by Gerald, G4OIG, soon come into view and are an unmistakable landmark (Cornwall’s answer to the Wainstones or the Kinder Gates??).

This is the view from a distance and not far from the grassy track pictured above. The two rocks identified by G4OIG are on the skyline, about 1/3 the way along from the left of picture. 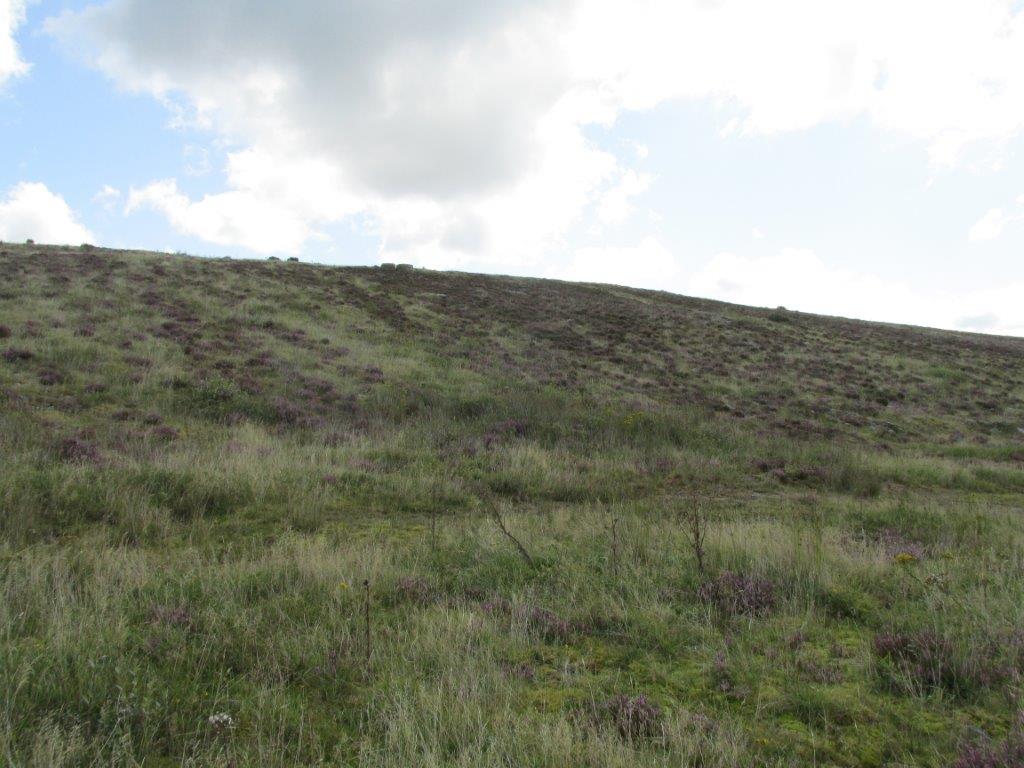 The next image shows the two rocks close up (adorned by 2E0DGM (who, sadly, isn’t into SOTA at the moment and Alice) and my chosen operating position. 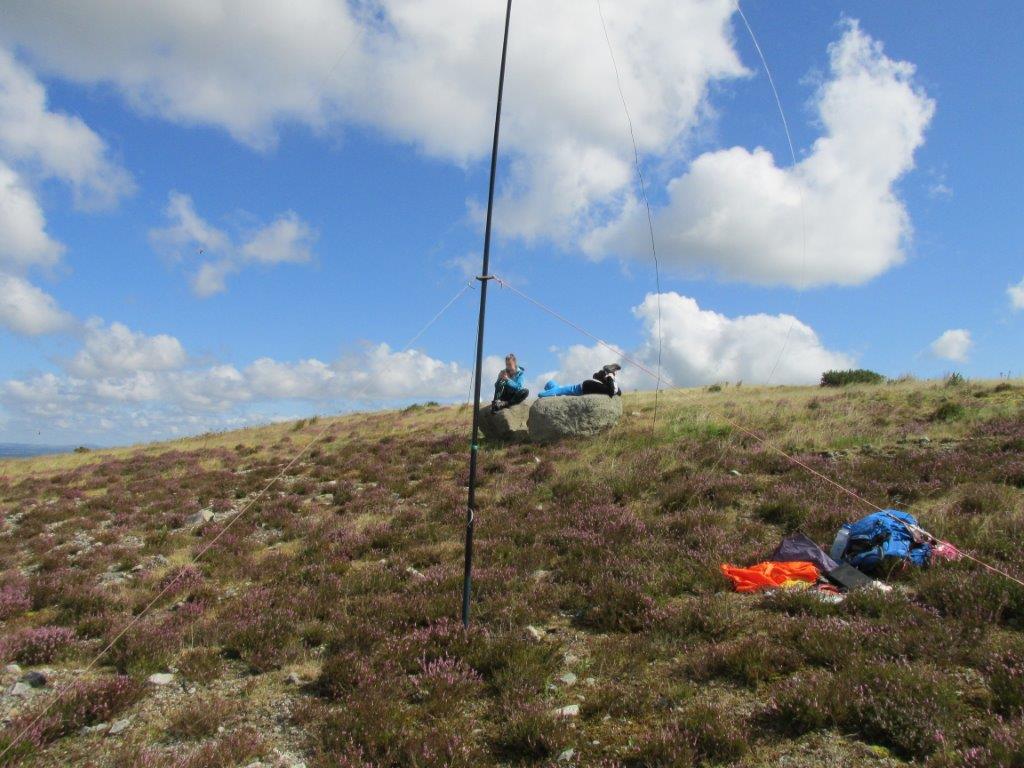 A S2S contact was achieved on 40m and then three contacts came very slowly on 20m from EA and HB through rapidly-changing QSB. 20m duly abandoned in favour of 60m and a quick flurry of English QSOs came on 60m. 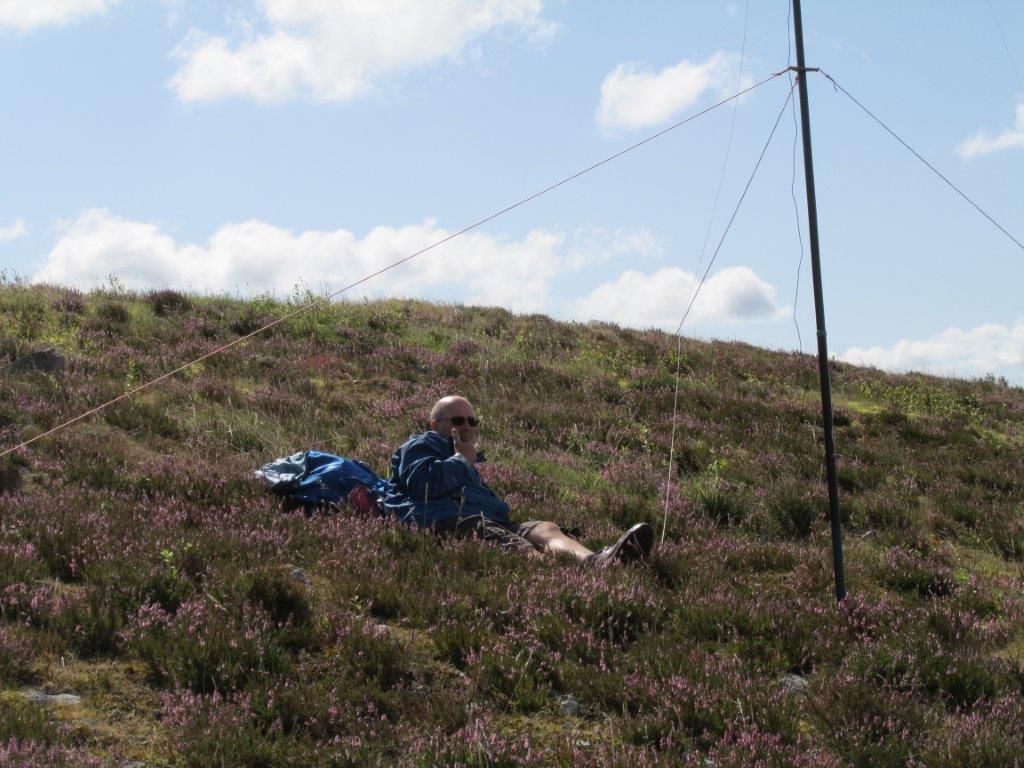 Further to the north, the vegetation changes quickly to thick grass and moss, as shown in the next image, and is less suitable as an operating position – note Brown Willy, G/DC-002 in the centre of picture. 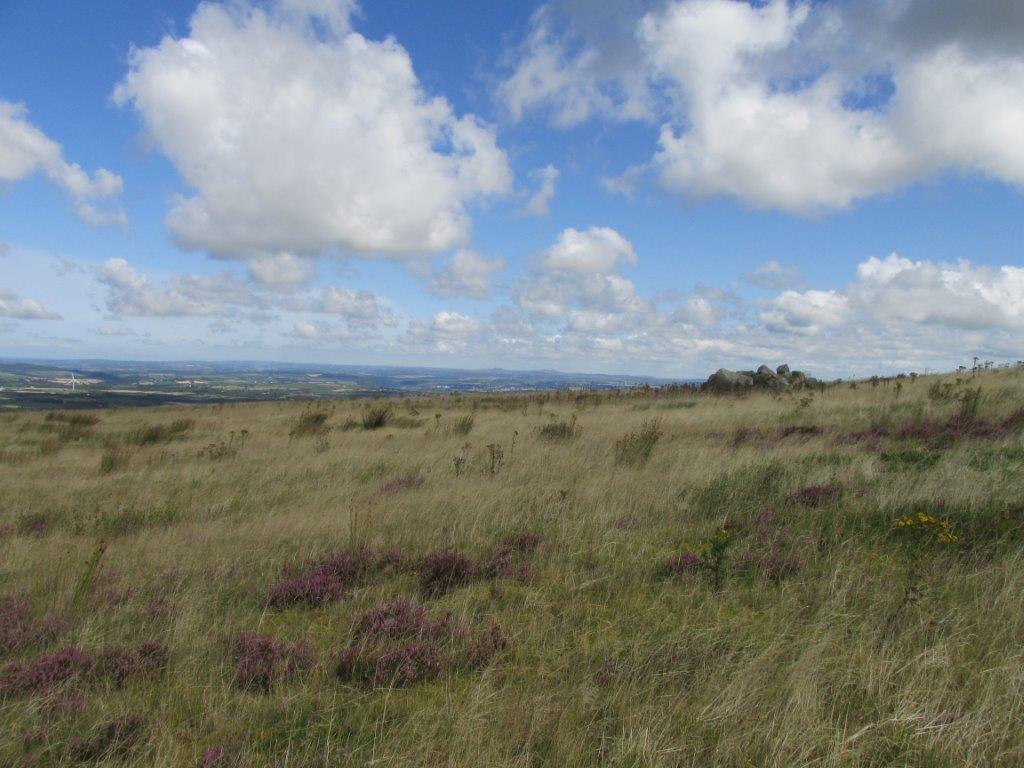 Finally, below is the view from the operating position looking back to the car park (near the tall pylon and white trackway). The white trig-point on Hensbarrow Beacon can be seen and the Atlantic is visible at top of picture. It is exposed with great views so fantastic in good wx, which I had, but not recommended in inclement wx. 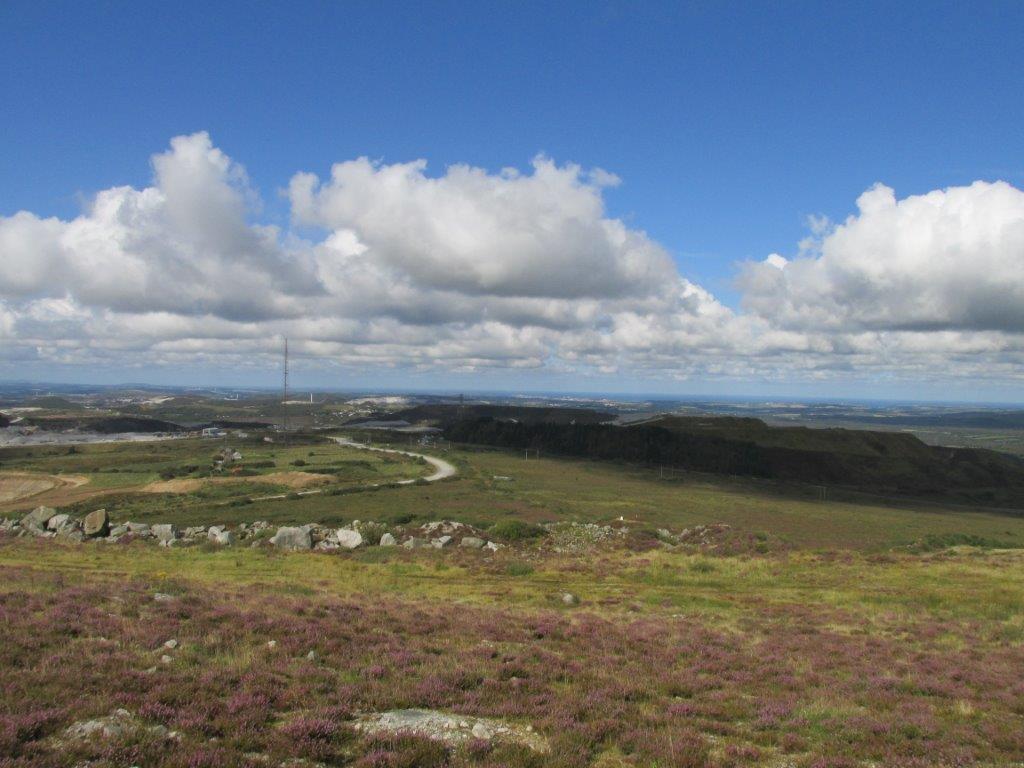 DID listen for you on 40m .
But no joy as not far down road from me and also getting great short skip as well as worked Flatholm island 5/9 both ways south wales 80m north of here.

May be next time

Thanks for the excellent report Alastair and for taking the very useful photos. I took a slightly different route initially off the Beacon, but essentially ended up where you did. I was interested to hear that you received a friendly wave from the guy in the pick up truck. My daughter did say to me that there is a good relationship between the company that work the clay in the area and the public.

I called you on 60m, but your signal was battling with the local noise level, so I had to call time on the attempt. I am sure it won’t be long before another opportunity arises to work the summit and I hope to be around to activate it for the next NA<>EU S2S event on 19th November, subject to the call from Papworth.

Well done on bagging the first activation spot and having what looks to have been an enjoyable activation.

Thanks for the timely activation, Alastair! I had completed chasing all the G Association summits some time ago, but that morning I no longer had a completion, and then you popped up and gave it to me again!

Thank you for the report and for the contact on 60m. Glad that you had a good day bagging a ‘first’

Thanks Karl. Will call CQ on 2m FM/SSB next time. I’m in DC several times a year so will try to remember to post details of next intended activations on reflector.
73s
Alastair, M0TYM