Just a short report on yesterdays FT8 activation of VK3/VC-031, Arthur’s Seat. Band: 40 m. Ant: dipole in inverted V with apex at 4 m. Set up in grassy area of picnic area. Power 25 W for 10 minutes, 1 VK2 QSO. Then 15 minutes later, 10 minutes at 50 W for 1 VK2 QSO. Lots of DX seen but none of those calling CQ heard my response. I resorted to SSB to get the 4 QSO’s. I used a standard Laptop as I only had to walk 100 m from the car park. No problems with visibility, the sun was getting low in the sky at 4 PM local. Visitors, 4 in total. Here are two who didn’t say much. 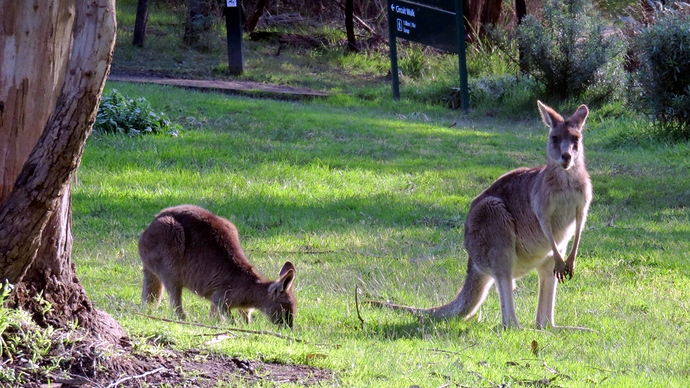 On checking PSK Reporter this morning I saw I was being heard at good strength in ZL3 and Northern VK2. VK5 should have been possible as three worked on SSB. -18 dB reports from USA and Ireland…

I miss-typed my SMS spots but suspect that most JT8 operators in VK don’t monitor SOTA activity.

At present while FT8 offers better signals than other modes there are not enough VK/ZL SOTA chasers using the mode to make it viable at present. The DX is unlikely to see weak signals due to them being buried under big guns.

I’ll try again another day when I’m not so pressed for time.

G day Ron sri I missed you we had to go to Moonta for the radio club agm. When I say we I went to the club meet Halima went to the art display on at the town hall . But I have been doing some FT8 and Ian vk5is is a keen SOTA chaser/activator so we will keep an eye on things so hopefully work you next time. I see Andy vk5la on FT8 this morning, he has done some activations and chases so there are a few taking an interest that I know off. No chance for me to do digital on a summit any time soon but I can chase if I am in my shack. good luck Regards from
Ian vk5cz …

By the way Ron I forgot in previous post to ask how and what macro files did you set up for SOTA in the software.
Ian vk5cz …

I didn’t use any this time. Whatever one uses somebody will be confused and maybe get upset.

Obviously to be edited for each peak. The second was to be used occasionally when no 1 wasn’t getting a response. The VK3/ is used because with /P the grid square is omitted in the CQ call…

The regular users will adopt a standard format I expect.

Interesting Activation and I guess you’d have to watched you didn’t get ‘bounced’ by the bouncers. Certainly a mean looking couple - you wouldn’t want to cross paws with

And maybe some time a VK Activator will try a S2S with the REAL Arthur’s Seat in GM land, with the two imposters in VK

Well anytime you want to try namesakes S2S I’m up for it, well from about 1000 UTC to 2100 UTC is a bit awkward and I’d like a weeks notice. I would need to arrange a leave pass.

And you would need HM’s approval, via a delegate I guess.

Yes Ron - I’m up for it, but not till I’ve finished off all the SS’s in Scotland. Down to the last 30. Have been a wee bit distracted over the summer with cooking my SOTA lunch on summits on 13CMS.

And if we want to have a go with S2S, and say both in VK?, I’m sure we could get the media interested at this end. Especially when you see the view across Edinburgh from the top. Good for international appreciation and of course the tourist trade - we need the ‘dosh’ it appears

Be careful with that wok. A friend of mine has recently been in some remote parts working new grid squares on 10 GHz and 24 GHz, by EME of course, and was “invited” by two Federal Police officers to their local police station for a chat about him being seen trying to shoot down aircraft. A concerned member of the public had rung the terrorist hot line apparently. He has been released I believe without being charged or having anything confiscated. It seems out Government slogan of Be Alert, and (not) Afraid is working and everyone knows the security reporting hot line.

Back to topic.
Conditions are dreadful at present. Nothing at all heard today from 2E0YYY or from the CW activators on 20 m. 40 m was the best band for Eu. A couple of EU stations worked on JT8. One G seen but did not respond to my calls. Slim pickings on 20 and 30 m.

Utilizing the Grey Line and Equinox peaks is probably the only way the Arthurs will talk to each other for a couple of years when i hope conditions will have improved.

I got a serious but polite “talking to” by UK military people and site security staff when I did Saxa Vord GM/SI-157 the other week.

Good Luck Compton, I am tied up all day elsewhere - no radio.

All done. Thanks to VK’s 3XI, 3ANL, 2SVN and 7XDM. Took 34 minutes. Much slower than SSB especially when I am a novice JT anything user.

I tried Ron’s suggested macros but I need to brush up on macro use, not sure how well they worked.

Well done, you get the cup. Yes it took half an hour, about twice the quickest possible time, which is OK especially if you could not have worked them on SSB. ie if they were -10 dB or less there’s no way it could have been done on SSB.

Hi Compton,
What equipment were you using?
I’m having issues trying to get my FT-817 to work with my Windows tablet and decode FT8 signals, even here at home. The main station works fine on FT-8 and other digital modes but then that interface is just a USB cable between the laptop and the IC-7300 (as the com and audio controller are built into the rig).
With the FT-817, the CAT control is via a USB to serial/Yaesu dataport cable and that works fine, switching frequencies and from RX to TX etc. The other interface goes from the ACC socket via a “Wolphi-Link” box to the headset (yes it’s a headset, with microphone connection) 3.5mm jack on the Acer tablet running Windows 10 and WSJT-X v 1.8RC (the same OS and program as on the laptop).

If you have an FT-817 how are you interfacing the audio please?

If anyone else has got FT-8 running from a Windows tablet to a Yaesu FT-8x7 I’d love to know what interface you’re using.

FT 857D and Signalink connected by USB to notebook. Using VOX through the Signaling for PTT. Not bothering with CAT control. I just put the 857 on the frequency I want. Acer note book,1.6 processor, 2 G RAM running W10…

From my understanding the 857 and 817 are similar to setup.

Thanks Compton,
I’m pretty sure the Signal-link units have a built-in USB sound card, so that confirms what I thought, it looks like my problem is with the Wolphi-link using the 3.5mm audio jack, so I’ll need to go USB audio somehow.

I dont understand why yet but the IC9100 with its built in USB sound card decodes far more messages than the FT 857D with the Signalink. Have tested them side by side on the bench with the same fan diploe antenna.

As the FT 857/Signalink and notebook worked on the summit yesterday I’m happy to keep using it.

Hi Compton,
Could the difference in decoding be a function of the receiver in the two rigs rather than the interface. Perhaps the IC-9100 is more sensitive or can reduce bandwidth and hence unwanted noise better than the FT-857D?

I have a couple of USB audio “dongles” that I will try out first, along with the Wolphi-link, I just need to make up a splitter lead from the 4 pin 3.5mm jack to two standard stereo jacks as the USB dongles split headphones and microphone inputs.

My suspecion is that the tablet doesn’t disable the internal microphone when the headset socket is in use (it ought to, but I think extraneous noise may be getting in that way). Switching to a different audio source into WSJT-X will remove that possibility of course.

Could the difference in decoding be a function of the receiver in the two rigs rather than the interface. Perhaps the IC-9100 is more sensitive or can reduce bandwidth and hence unwanted noise better than the FT-857D?

Yes, Given the $price$ difference I expect that the receiver performance is the key bit in decoding sucess.

Just out of interest I tried interfacing my home rig with WSJT-X running FT8 and found that, if running packet USB, I had to tune 1.5 kHz away from the activity frequency set on the dial. When tuned that way (I later set up the packet display offset to make life easier) I had no problems. My rig is a Yaesu FT5000 so that may be a pointer to lack of sensitivity on the other Yaesu rigs - you may have put the wanted signal on the edge of the rig’s filter.

Incidentally bandwidth dosn’t come into it with packet, set the filters as wide as possible.