Taking a tip from top chaser Karl I have followed his lead and upgraded my TS120v to an FT-450D. So far it have proved to be a very sound investment. It’s surprisingly good for its modest price. My FT-897 has now been recategorised as test equipment at the factory.

I have even done a bit of chasing today.

I know some DXpedition types who have the choice of all and any radios. They have junked all sorts of kit now and concentrate on using FT450 only. It’s cheap enough to be expendable and more than good enough for their needs. Predominantly CW operators but with some SSB.

Congrats for the new adquisition.
It’s a very good choice indeed.
It’s receptor has been rated as one of the best in the current market.
Cheers,

Thinks mine is the FT450 AT and not the D model

But well happy with mine and acquired at reasonable price too, even new at £500 around there about’s and worth investing in. And take getting a little used to compared to the very basic Trio 120V. And you can do so much more.

But the FT is a very very good radio small compact in a sense and lighter than the trio 120V as mine gave up the ghost and one day find the money to get ti repaired as a stand by.

Yep FT450 is a great smallish radio, does the job nicely and yet still after 1 and half months having it still sussing out many areas not discovered yet. Been told puts out nice audio even at 10w.

Yep a very happy FT450 user.
Bet your finding one major difference between the two radios are you not

I’ve been looking at radios to upgrade my TS130SE (not stable enough long term for wspr etc.) and had considered the FT450D and the FT991 but both looked a bit tacky “in the flesh”. And the FT857 is so ugly…

But in the light of the positive comment here may well give the '450 a punt. Could get myself another '817 with the money I save not buying a '991

I don’t think you will be disappointed. I expected it to be just a rather more user-friendly version of my FT-897D but it’s a far superior radio all round - and only a little more expensive than an '817. I think you would have to pay a great deal more to get anything significantly better (x2, x3). I spent most of the day “on the radio” today - first time in years. Caught a few activators but conditions are poor.

My eyes are not that great these days and the illuminated buttons and excellent display are a bonus too.

The ARRL review is here:

PS - one nifty feature is that one front panel button and all three buttons on the microphone can be assigned user-defined features. I have set the front button to give a 10W carrier for tuning, one mic button for a CW CQ message (built in memory keyer) and another mic button for “monitor”.

Hello,
(I have the FT-450) When he came to the shops, (long time ago) it looks ugly because the smal dial i thought… (I was accustomed to a big tuning dials…)
Then… one day i bought one, and what a good surprise, has lots of standard features then in others like FT-950 are options…
My only complain, is the áudio from the speaker… but i have an external speaker and its an amazing rig! (Always have good reports from my modulation, with the original mike, or the MD100.)
Mine, dont have the AT, because i dont need him, (i hate ATs!), and he have more space to do a better ventilation. (i have good external ATs to use once in a awhile…)
The “D” version is almost the same, but has some more standard features, and cosmetic improvements.
Great choice, congratulations!

I won the raffle first prize at the McMichael Radio Rally.

I have had my FT450D over 2 years now and it is a great radio. I use it for chasing at home, portable when camping and the occasional SOTA activation. 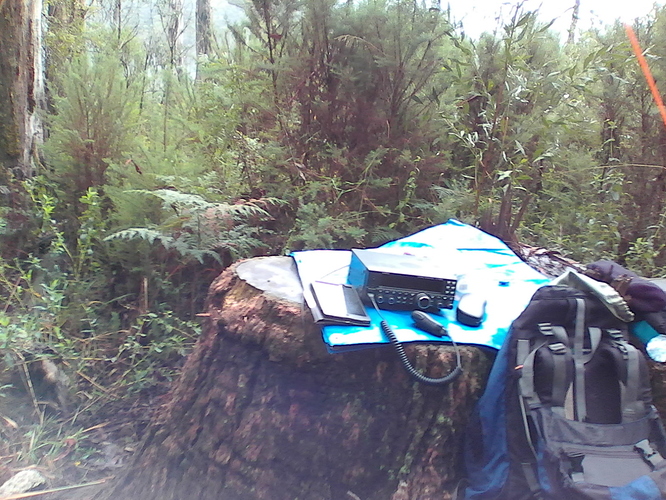 is the áudio from the speaker

Erhh yes could be lot better

Use head phones me self

I wonder if a similar modfication that several have done on the FT-817D would also help audio from the FT-450 range?

There is a speaker, which is usually used with model railways, that is a lot less “tinny” than the standard FT-817 speaker and just happens to be exactly the same size!

If the FT-450 uses the same sized speaker as the FT-817, then it may be worth the €30 or so for the replacement speaker.

There is a speaker, which is usually used with model railways, that is a lot less “tinny” than the standard FT-817 speaker and just happens to be exactly the same size!

Yes, I can vouch for that. I fitted the “model railway” speaker to my FT817ND a few months ago and it has made a worthwhile improvement to the bass response on received signals. Mind you, if you mostly use headphones it won’t make much difference!

(2) What AH capacity of battery do you use to run the FT450D when out /P? In the spec, it says you need a psu capable of delivering 22 amps to run the transceiver at full power!

I would class them as a semi portable/ Base Rig

I agree with you … the FT450D is best described as a base station rig, with semi-portable use as very much a secondary option.

As a base station, its spec is very similar to my Kenwood TS590S which costs more than twice as much!

I don’t need an ATU because I always use a resonant dipole (linked dipoles) for HF bands.
I am sure the performance of the FT450D is much better than the FT857. My only objection for portable operation is the size and weight.

4kg still not bad for whats in it .

FWIW Karl, all the internal tuners that have come with Yaesu rigs I’ve owned, have been junk. Buy the rig without a tuner and invest in an external one.