I activated the tallest mountain on Indian Ocean this morning June 11th at 3.00 AM UTC.
Although I am coming quite often to Reunion Island for last 25 years apart climbing volcano I was not really attracted by other summits. That changed once licensed as radio amateur and discovered SOTA programme.

This year the main target was FR/RE-001.

I always heard that this was tough mountain (my YL hiked it when she was child) but everyday there are some tourists and locals that are climbing on the summit so that was feasible for me too.
Well trained may reach the summit the same day, but I am not so chose to do it in a more classic way.
First day to reach shelter at 2400m+ then pass a short night and wake up on 4.00 AM (local time) to hike to the summit before sunrise which is an unforgettable moment. At the end come back to base of the circuit in Cilaos.

So that was the plan.

Indeed on Sunday June 10th reached shelter where there was lot of hikers coming that day (20+).
The night was freezing and we spent it in a kind of tent sleeping in the clothes - just without shoes.

At 4.00 AM local time (0.00 AM UTC) I and my family left the tent and hiked in the darkness (having frontal lamps). The night was full of stars but the temperature slightly below zero centigrade. The final hike was a bit complicated because of thousands of stones to step on. We arrived just before sunrise but then a freezing wind started blowing. My Net on 80m I was aiming at already started so I was in a hurry to deploy antenna and prepare my KX2. I had an Endfed 20m long that I connected without transformer directly to KX2 and another 10m of wire as counterpoise. Usually that makes trick on 80m with internal tuner but this time tuner could not find a good match.
The best I could do was SWR 1:5 and I called to check in hoping the finals won’t get hurt.
I got an answer and could work 3 stations from Reunion Island and 1 from Mauritius.
That was enough so after 10 minutes, as my fingers started freezing too, I announced QSY to other bands to chase some DX if possible.
The other hikers were really surprised and interested what I was doing (they never saw that and some started getting selfies with me!!!). The view of 10m fishing pole was not common on 3000M+ summit.

On 40m I heard well few Russians and also US stations but I could not work them. Similar situation on 20m.
Well, the cold was stronger that my patience so packed back all the gear I prepared to go back. In sunlight the landscapes were awesome, but the track was so bumpy so I was wondering how did we hike it in the darkness. In daylight it looked much more difficult.
After 7 hours and half we reached bus stop pretty exhausted and I was almost not feeling my legs. But I was the happiest Ham Radio operator at this moment.

I hope the next activations in FR/RE next year. 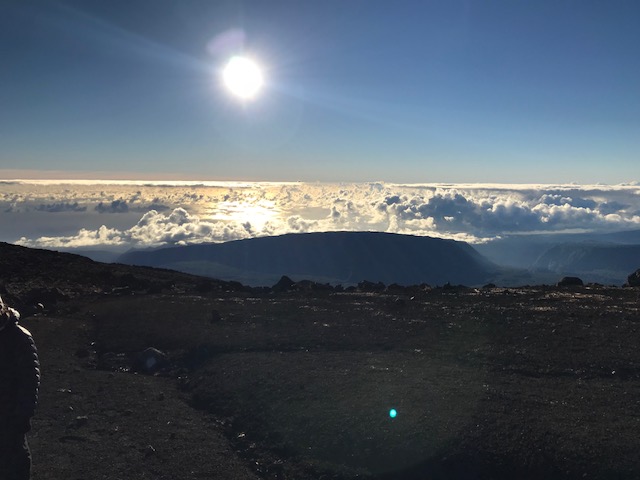 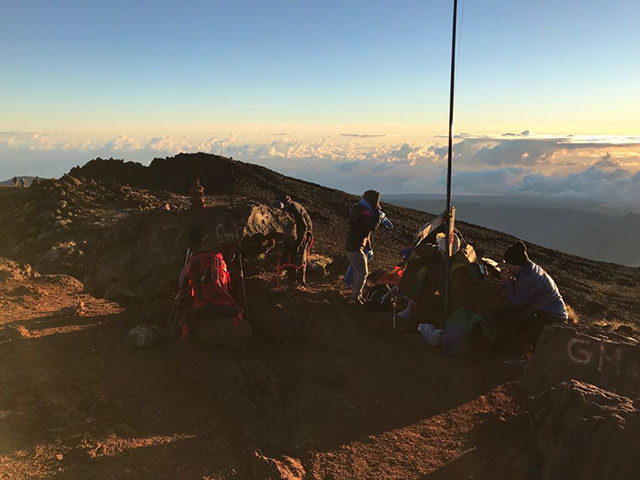 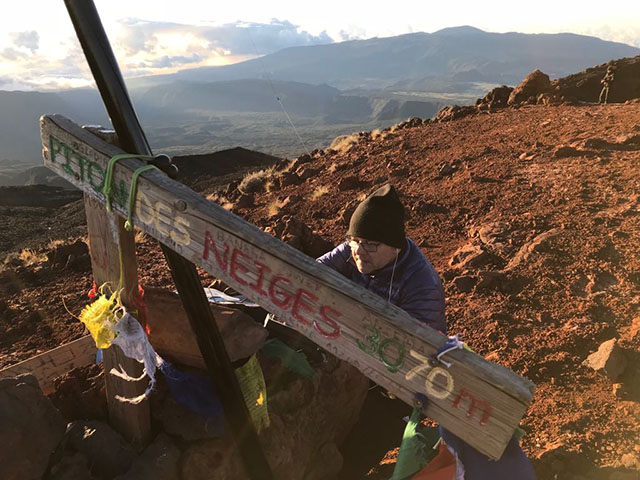 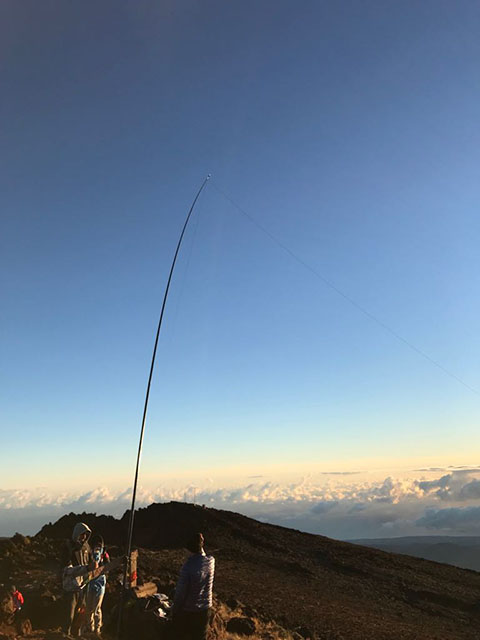 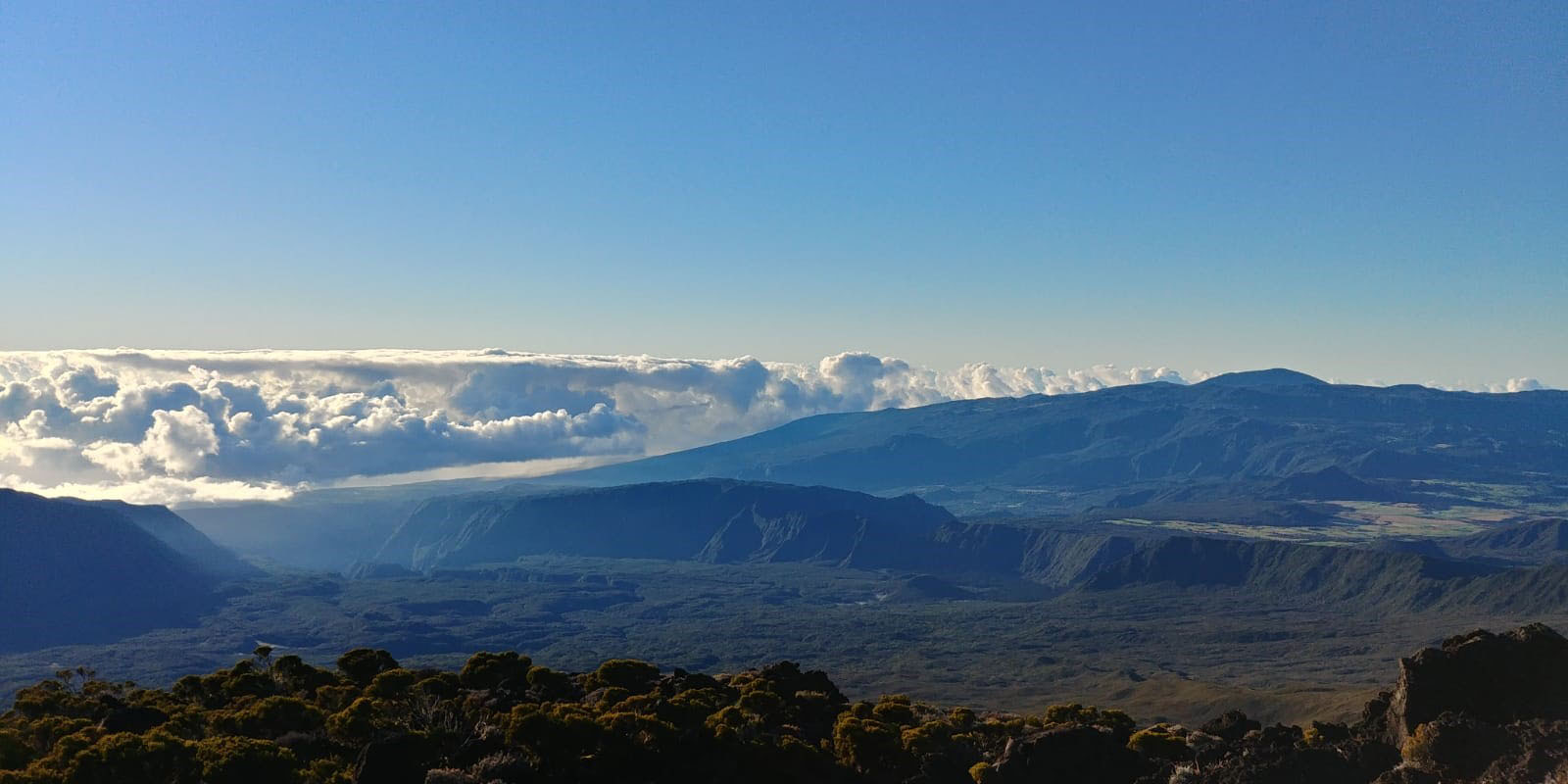 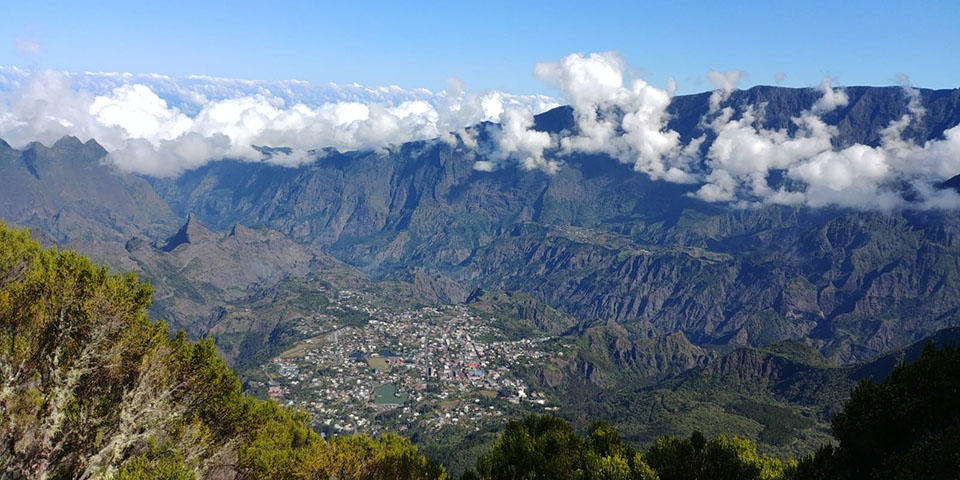 Thanks for the report and what an achievement! Glad you got that magic fourth contact, although I guess at the time with other bands to work you maybe didn’t realize that it was going to end up with ‘just the four’.

Some memories for you and your family to cherish for years to come.

Yes, that will stay in our memories for sure but I will not come back on that mountain for a while.
I wanted to make many more QSOs and was initially planning to stay one hour on the summit (on others was staying even two). 10 watts on SSB is not much for DX but sometimes it’s working surprisingly well and I was thinking this time about grey line contacts too.
But I did not really realize the cold on such tropical island because usually operating around noon and that makes big difference. The summit name translates as Peak of Snows… there was no snow but all traces of water transformed into ice cristals.
My wife wanted to leave as soon as possible because of freezing conditions so she even helped me to pack antenna wire for the first time

. And with four QSO I was good so I did not resist as she knows the rules too by now Hi Hi.
We were almost the last leaving the summit apart 2 professional photographers staying more time.

Thanks for the info Thomas - summits, radio and family are a heady mix - you did the right thing after the fourth contact - just be happy that you didn’t have the scenario with three in the log and a very cold wife! That’s definitely being between a rock and a hard place!

Seriously, however, what I find is that SOTA makes me go places that I wouldn’t normally have contemplated - and for that I am very thankful for the programme, and my wife also now appreciates this having also experienced some wonderful summits.

You cannot predict HF conditions and must take any activation as a victory as the sun is totally out of our control. You may also have found that the time you were operating also made a big difference - my early morning or late evening activations can yield surprisingly few contacts!