My second summit during my trip to the Sierra Nevada’s in the Granada region of Spain with my family. The 2nd nearest to our base, the summit EA7/GR-051 Calar - also one that had yet to be activated.

This time Alex came with me. An easy ascent was required given the punishing temperatures here at the moment.

The previous Sunday we had driven past the starting point to the top of the mountain road. The road ends at around 1,900 m with good 360 degree visibility, great for viewing the Perseid Meteor Shower which was peaking that evening. We were treated to a spectacular sky view after our eyes had adjusted. We shared the car park with a photographer taking time-exposure photos of the milky way. Clearly visible were Mars, Jupiter and Saturn. We saw a good few meteors even though we could only watch the start of the show. 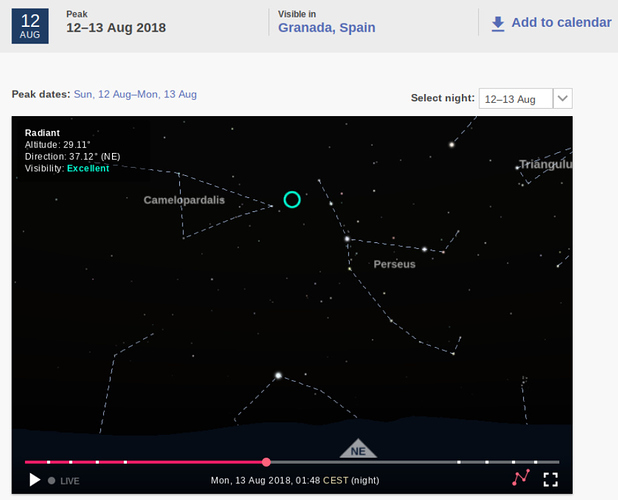 The chosen route to the summit is 2.1 miles and around 250 m of ascent at most. This is initially via an access track and then well marked trails. We set off around 08:00 AM local time.

The drive is about 20 minutes out of Güéjar Sierra - it took us about 45 from Pinos Genil. You can park directly opposite the access track, easy with a Fiat 500. From the photo you can see the summit of Calar is visible from the parking place. Coordinates for the start of the track are: 37.169442,-3.384177 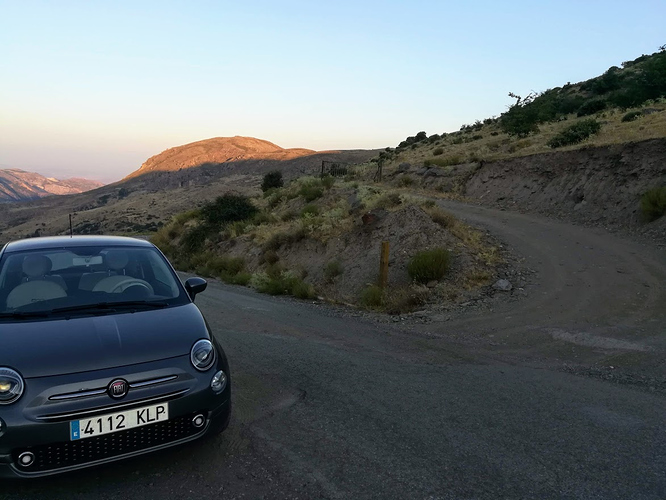 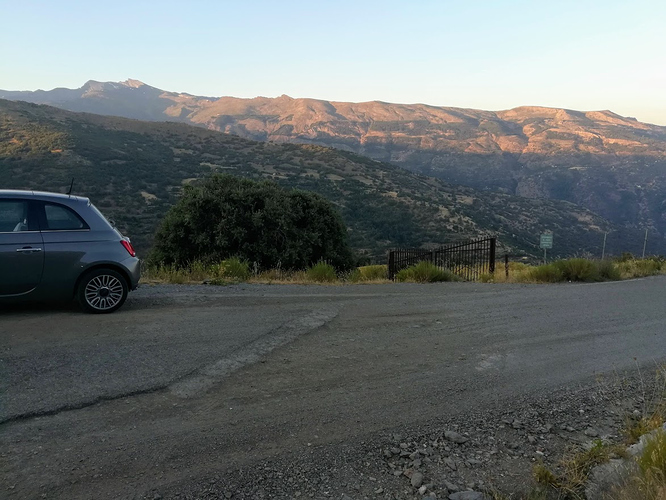 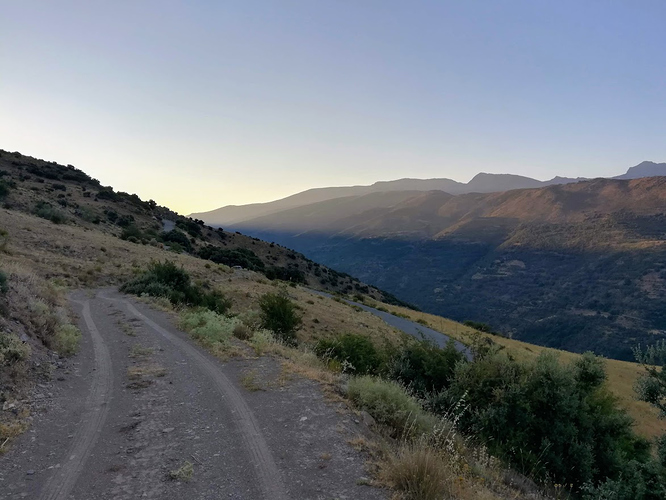 The walk along the gently rising track took about 20 minutes, then along the well marked path for about 35 minutes. A gentle gradient and only slightly steeper when near the summit itself. As always beware the prickly vegetation! This approach was a good choice today as I was suffering from a slightly elevated temperature - so the early start with cool temperatures and easy ascent made the difference between being out or being in bed! 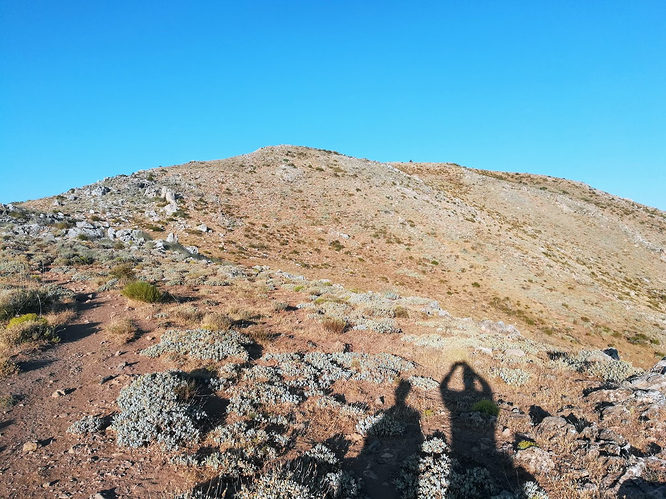 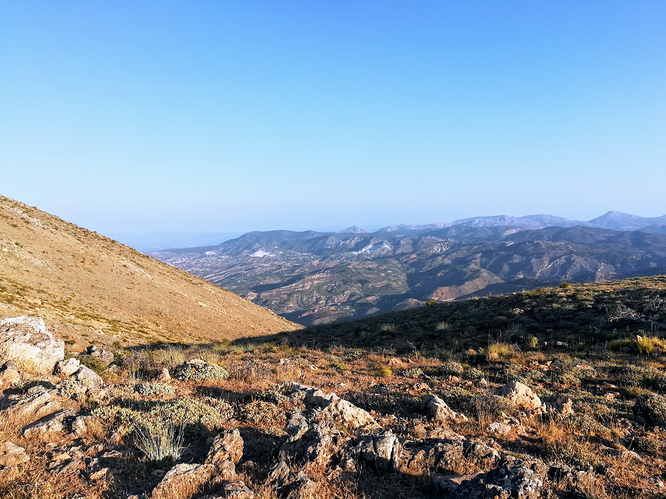 There are a number potential activation points - we chose the one with the best views which was the Westerly summit. From here you can see Granada, Pico Veleta, the summits to the North of Sierra de Huétor and the reservoir Embalse de Canales. 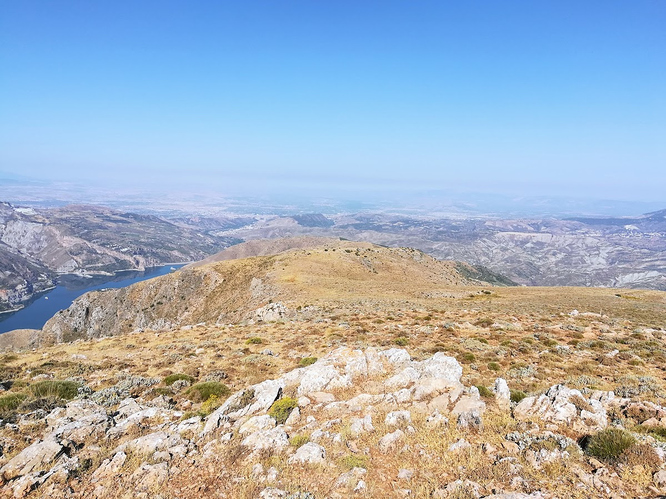 image.jpg1199×899 532 KB
Looking West towards Granada with Embalse de Canales in the foreground 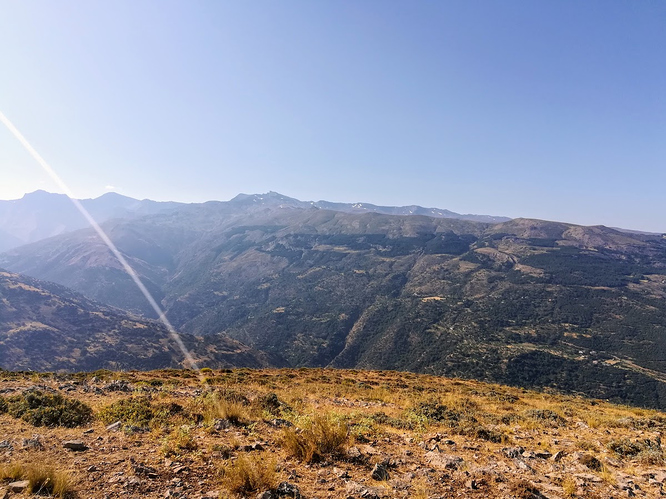 I setup the SOTABeams Quadbander atop the 6m Decathalon travel mast - again loading the ends with rocks. I thought I was ready, and had self spotted, then realised the positive cable was detached from the FT-817 powerpole connection to the battery. As a consequence the rig was working on internal battery at 2.5 watts thus halving my output power. At this point Phil G4OBK called to see if I was on frequency, once again first to the party! We had a nice QSO having explained why I was initially QRT. Subsequently I managed to strip and force the cable into the mating powerpole. I was also experiencing some weird RF behaviour - I was getting good reports from other stations but they were not showing any signal strength on the FT-817. I’m blaming this on the poor fit of the PL-259 into the SO-239 sockets on the MiniPA50 amplifier. I had to replace the originals which were ‘metric’ SO-239’s and clearly the cheap sockets I bought aren’t working well. Even when screwed tight in there is play around the PL-259 pin. A problem to be rectified when I return, probably as suggested by moving to branded BNC connectors.

Despite problems I had a good run on 20m of 16 contacts including John @G0TDM from Penrith - great to hear him abroad as I’m normally chatting to him on Lakeland activations. When I switched to 40m it was very slow initially and in the end only three chasers: EA2DT, EA1DFP & CT1BQH. A subsequent return to 20m resulted in no new contacts. 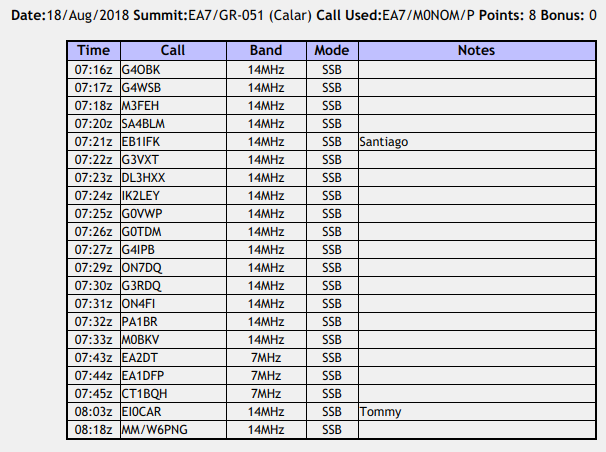 It was time to try some S2S - a good attempt with SV1RVJ unfortunately couldn’t be completed. Other activators on 20m could not be heard.

I had played with the connectors a little and I think the deep QSB was subsiding a little. I had a strong contact with EI0CAR which lead me to try one last S2S attempt with @W6PNG on tour in Scotland. Fortunately we easily completed the exchange of details!

My final plan for the region before we return is to take the Gondola and Chairlift to the summit of Pico Veleta and activate from there, but I have to chose my day carefully as there are thunderstorms and rain forecast. It has been amazing watching the weather form over the Sierra Nevada’s over the past couple of weeks - whilst clear skies dominate to the East every day Cumulonimbus clouds (or maybe someone who knows more about the weather can correct me!) form about the mountain range an spill out in our direction. Sometimes by mid-afternoon the sky is quite black but there has been very little precipitation here in Pinot Genil. The weather report for the summit of Pico Veleta is very different reading to the plains however! Average temperature at the moment is around 6 degrees and as mentioned with very different cloud conditions. 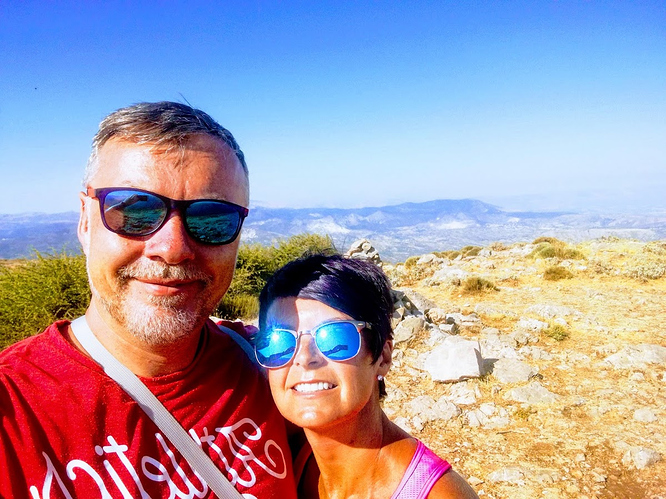 Thanks once again to all the chasers and activators. This hobby falls firmly under the enabling category in that it takes you places you would never have been. I was looking at the summits of the Sierra Nevada’s last night wondering if an expedition could take in many of the 10 pointers that have yet to be activated! Dangerous thoughts!

Thanks for the great report, Mark.
Look at the letters on your t-shirt.
It looks like your selfie is mirrored as it happened to me the other day.
Your expedition plans for non activated 10 pointers sounds interesting…
Have fun!
73,

Interesting point about the connectors. I have one of those amps and the patch cable mates well but i think it is also an M connector rather than an amphenol standard. They are certainly different from amphenol. Moving to all bnc is my aim. Better and more suitable connectors when many connect and disconnect actions will be needed.

Just a quick note to say that I managed to successfully get the 6m travel mast back home in my hand luggage - it just about fit diagonally in the bag.

Security in Malaga had everything out of the bag but, after explaining what the various bits were for, and showing my license, they just let everything through. The glow-in-the-dark plastic tent pegs will be a lot more useful over here now the weather is pretty miserable again compared with the rock hard Spanish soil!

I managed to successfully get the 6m travel mast back home

Great! I’m glad that your mast from Decathlon served you well and it will even keep serving you over more activations.

At least you’ve got your batteries fully charged after your holidays in Granada.

Have a great year. Time flies and you’ll be soon planning your next summer holidays