So still on holiday and still taking things easy. My right knee is still a tad sore but I’m keen to exercise it. Looking around for a couple of easy activations I settled my sights on north Fife with three easy summits were close to each other that weren’t hugely steep and didn’t need a long walk in; Normans Law (GM/SS-262), Mount Hill (GM/SS-277) and Cairnie Hill (GM/SS-275). All one pointers but hey I need to get some points under my belt. Whilst planning I hit on the most significant problem, car parking. Only Normans Law had a car park nearby but the other two did not. When I recorded my activation I only put up Normans Law and would spot the others if I could get the car parked without obstructing gates and entrances.

Normans Law sits over looking the Tay. The route up to it is part of the Fife Coastal path, thus the parking. The path is signed and then splits the left to the summit the right on with the coastal path. I had planned to go around the hill to the SE and ascend that way. That was the suggestion on the WalkHighland site. The path is wide enough for a vehicle and due to the dry weather was very dusty. As I entered one open gate I saw a path up the NE side of hill which whilst steeper was shorter so that was my choice. It didn’t do my knee any favours in fairness but I did get up. There were a few paths in various directions but the route is obvious. 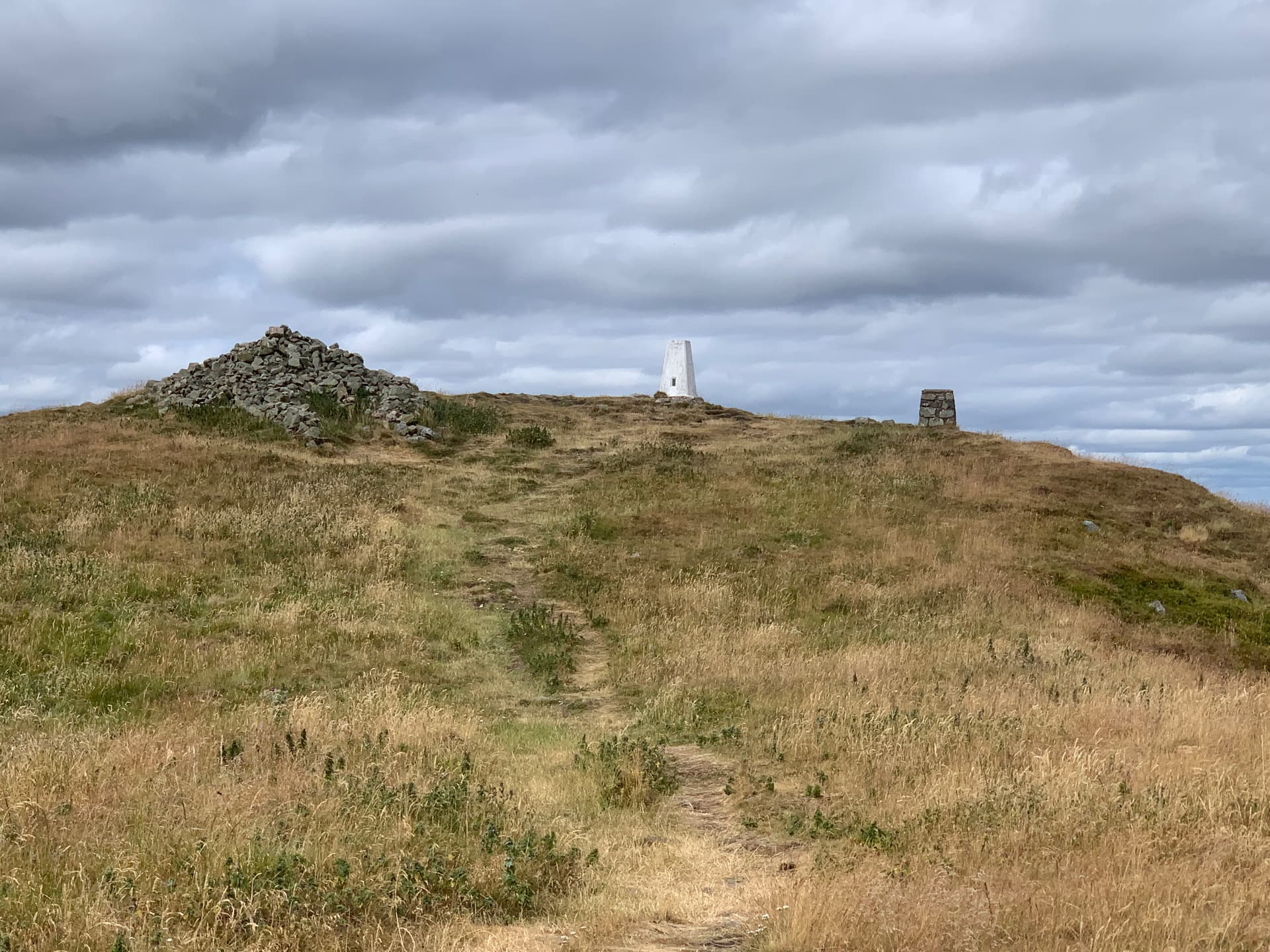 The views were great, here looking down the Tay to Dundee with the North Sea beyond 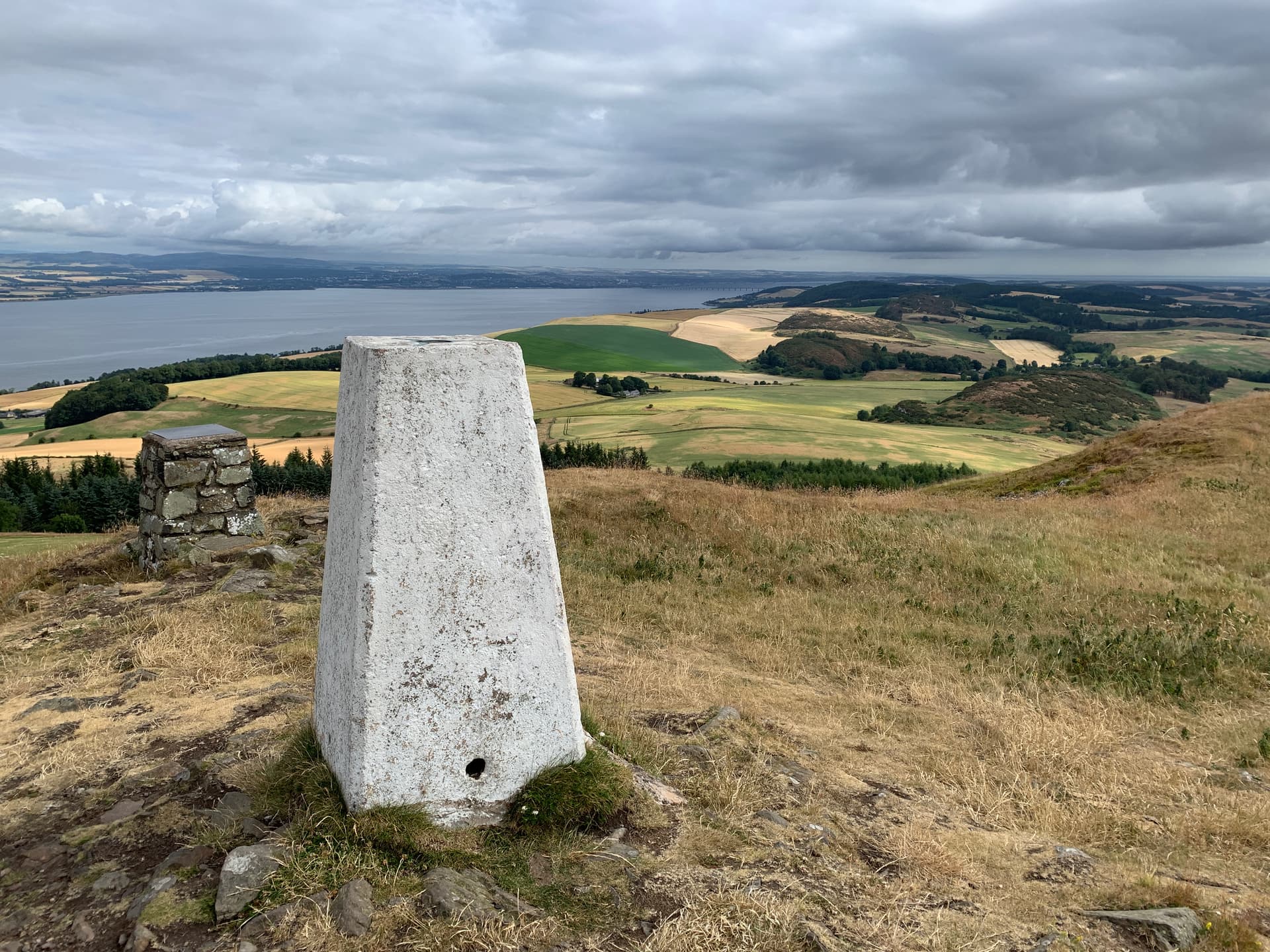 and here looking North with Schiehallion in the far distance 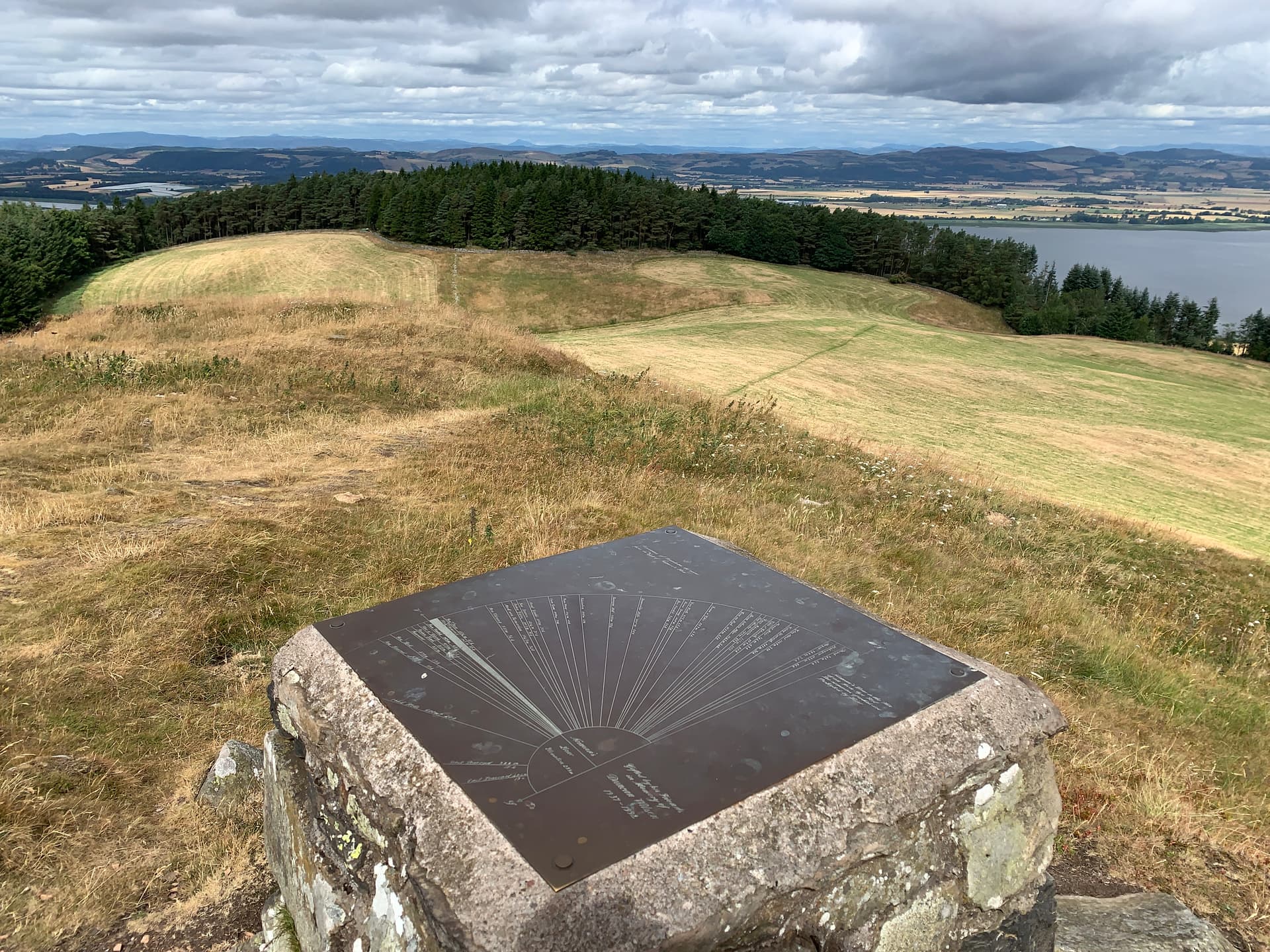 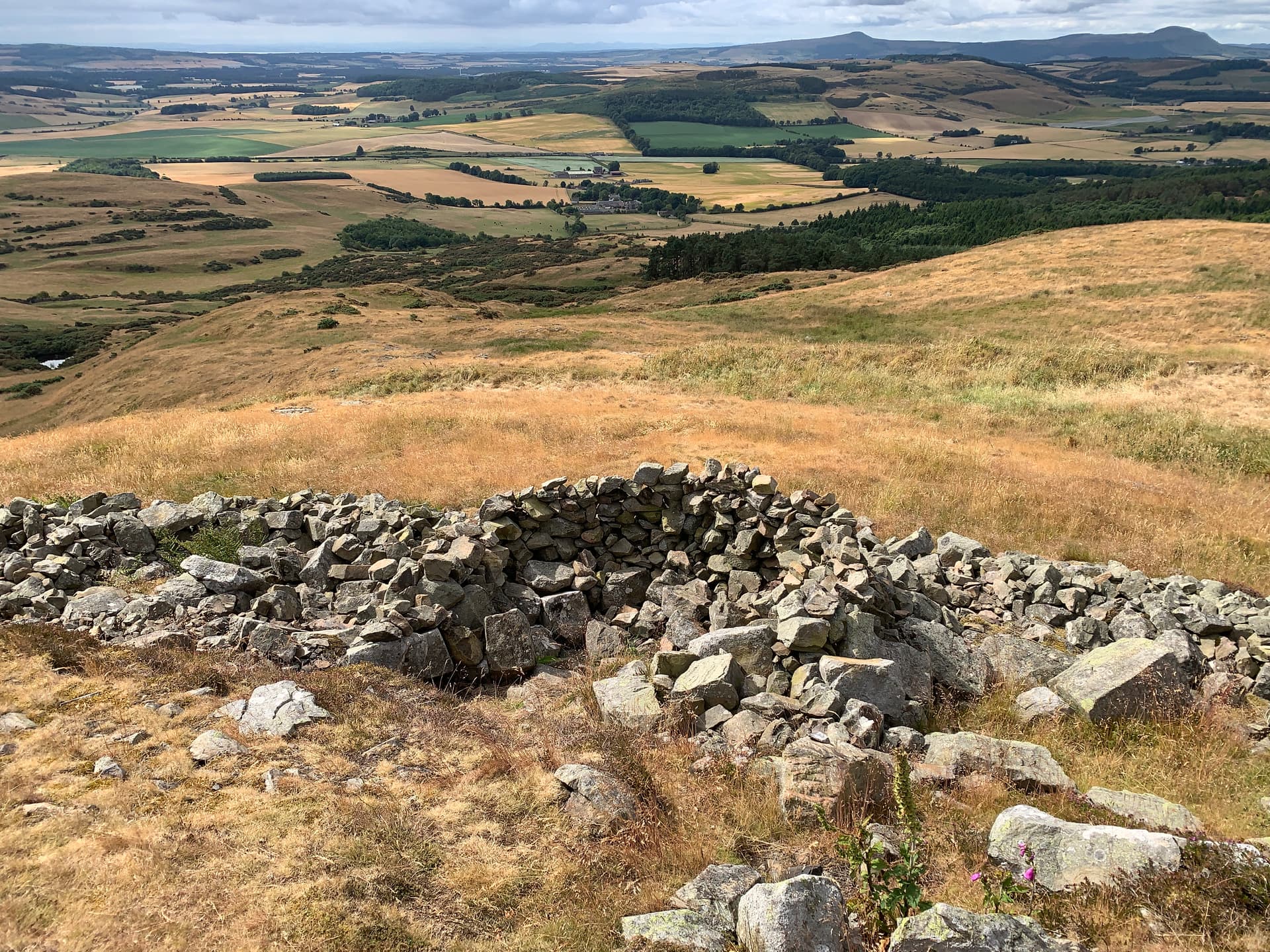 I use a TX-500 and usually a Sotabeams Bandspringer erecting it just off the summit and path I was quickly set up. It was fairly breezy up top but warm. The sky was overcast all day with black threatening clouds, thankfully it didn’t rain all day.

I started off on 17m with only one response so I fell down into the 20m and 40m comfort zone and had 9 responses in just over 30mins including one S2S with North Wales. 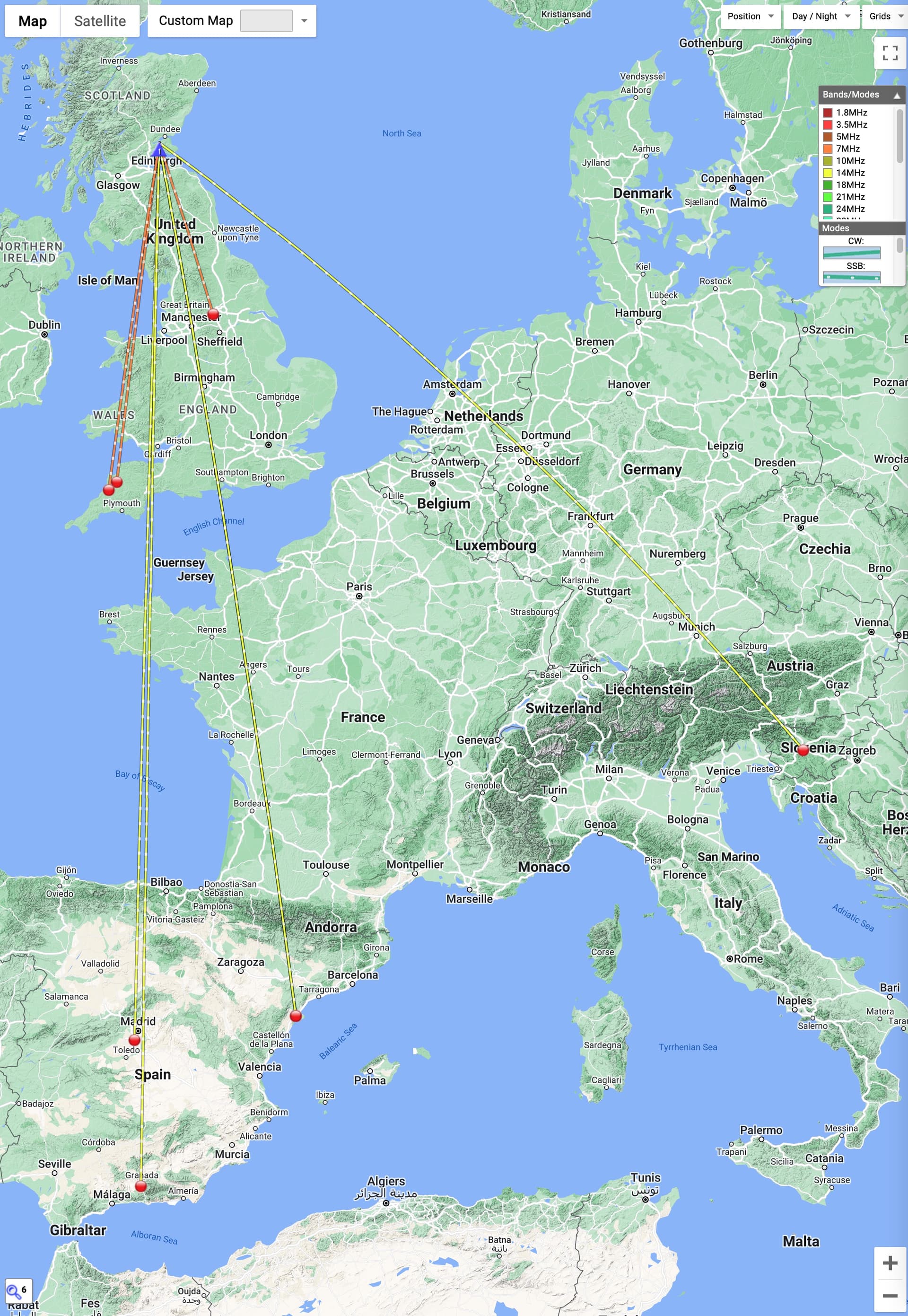 My next stop of Mount Hill was visible to the south from the summit. Coming down I followed my planned route which took you through various gorse bushes but the path was easily apparent. Next stop was to plan the route to the access point for Mount Hill into the car GPS. When I arrived at the Mount hill access the path was signed but there was nowhere to park without obstructing the gateway to a field. I elected to park it on the verge across from the access which would allow vehicles to pass, it was a single track road, and the fields were accessible.

The monument was largely obscured by trees once starting on the pat but the path was wide for logging and the gates all had small side gates for pedestrians. As you got near to the summit the path became very overgrown and rutted and I elected to stay on it going around the summit on the path as opposed to bushwacking to the summit. 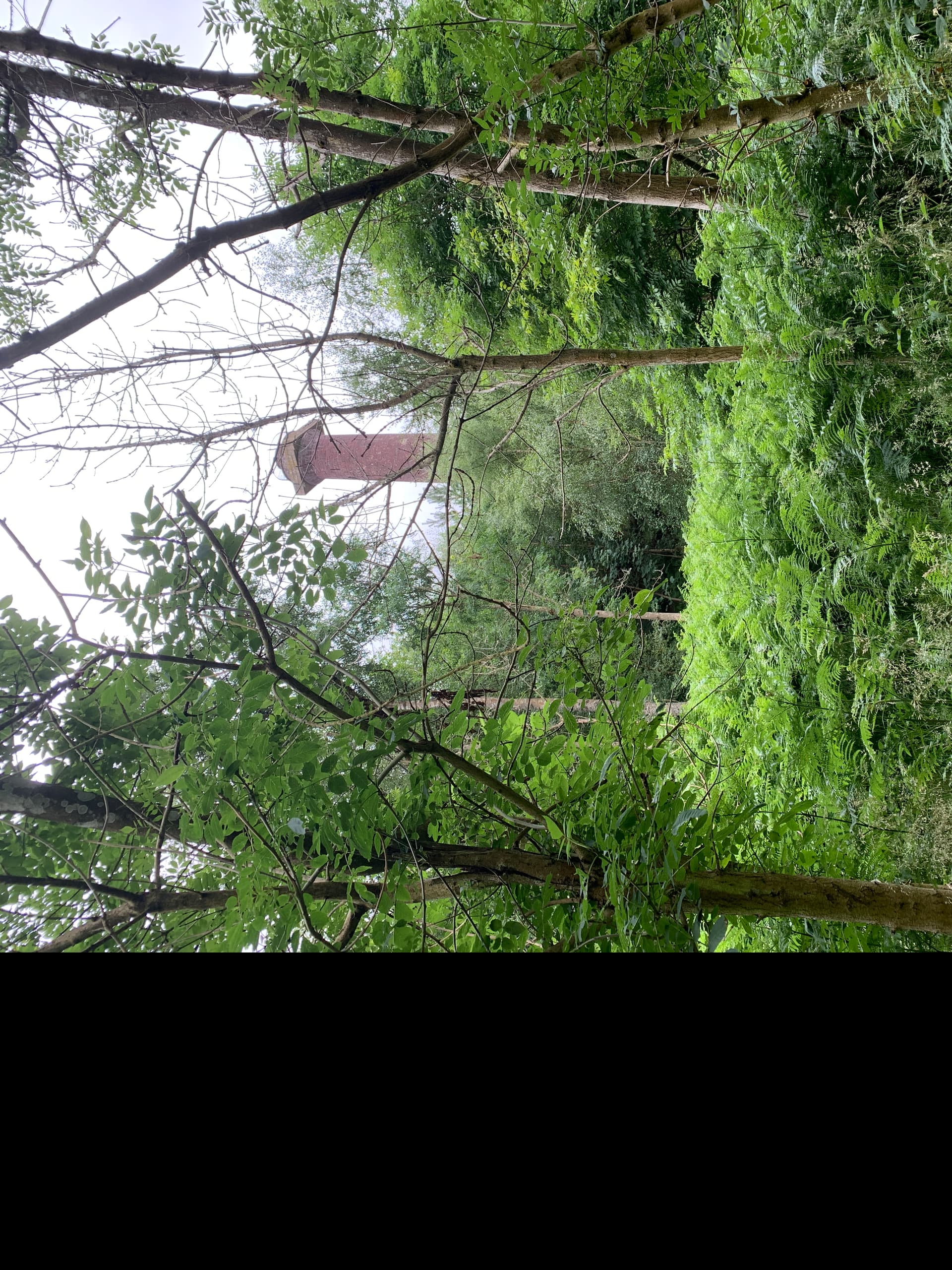 As I walked around the hill next to the fenced enclosure of the summit the path was blocked by wind fallen trees but there were paths made by others through the 6ft tall ferns.

I couldn’t quite make out the plaque for the monument as I was very hot, sweaty. 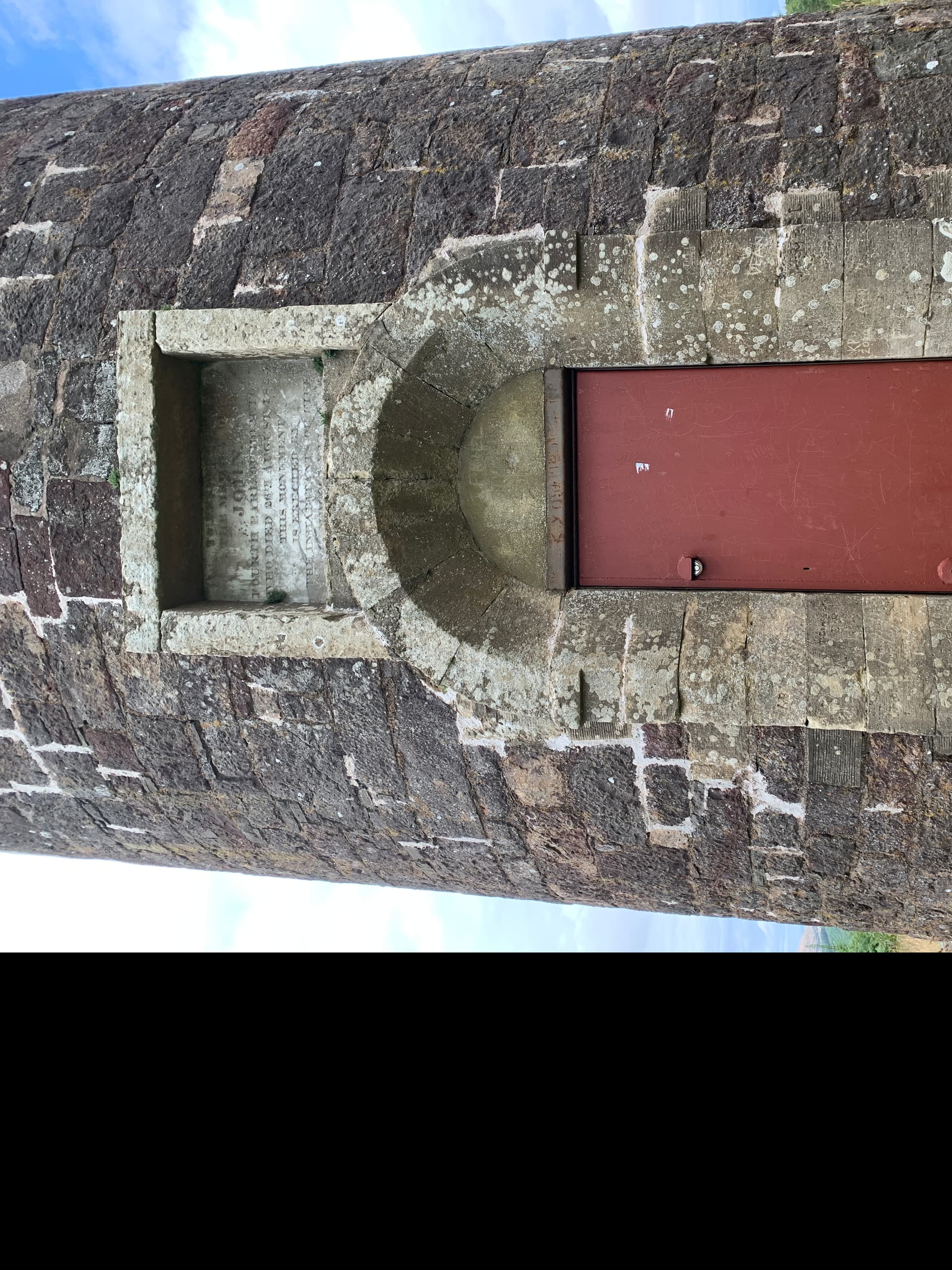 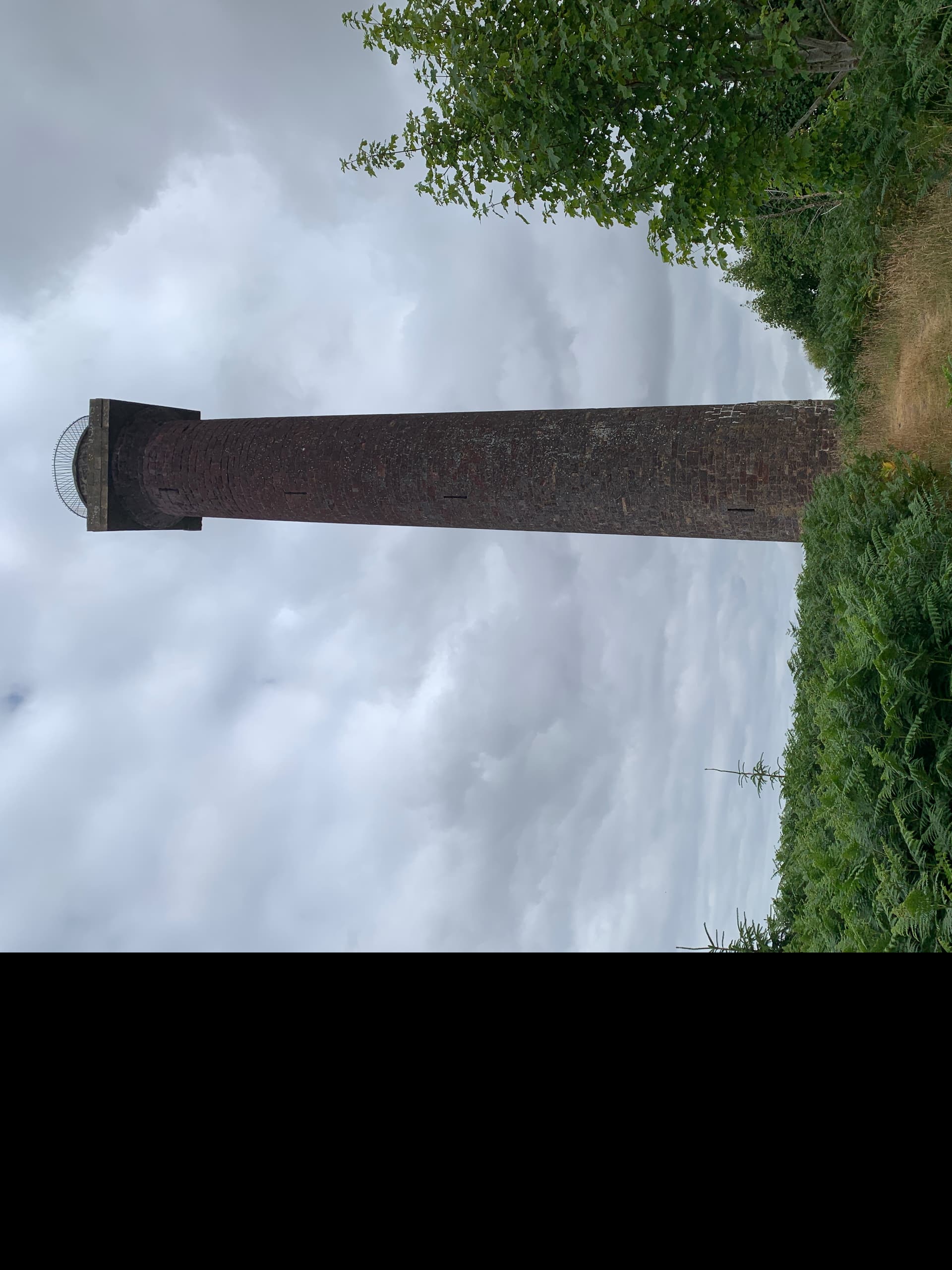 The trig point sat a few feet away from the monument and seemed a good place to lean against for the activation. With the heat and me being tired I felt a bit lazy and just used the Elecraft AX1 aerial and the trig point as a base. The radial was thrown over the adjacent gorse bushes. 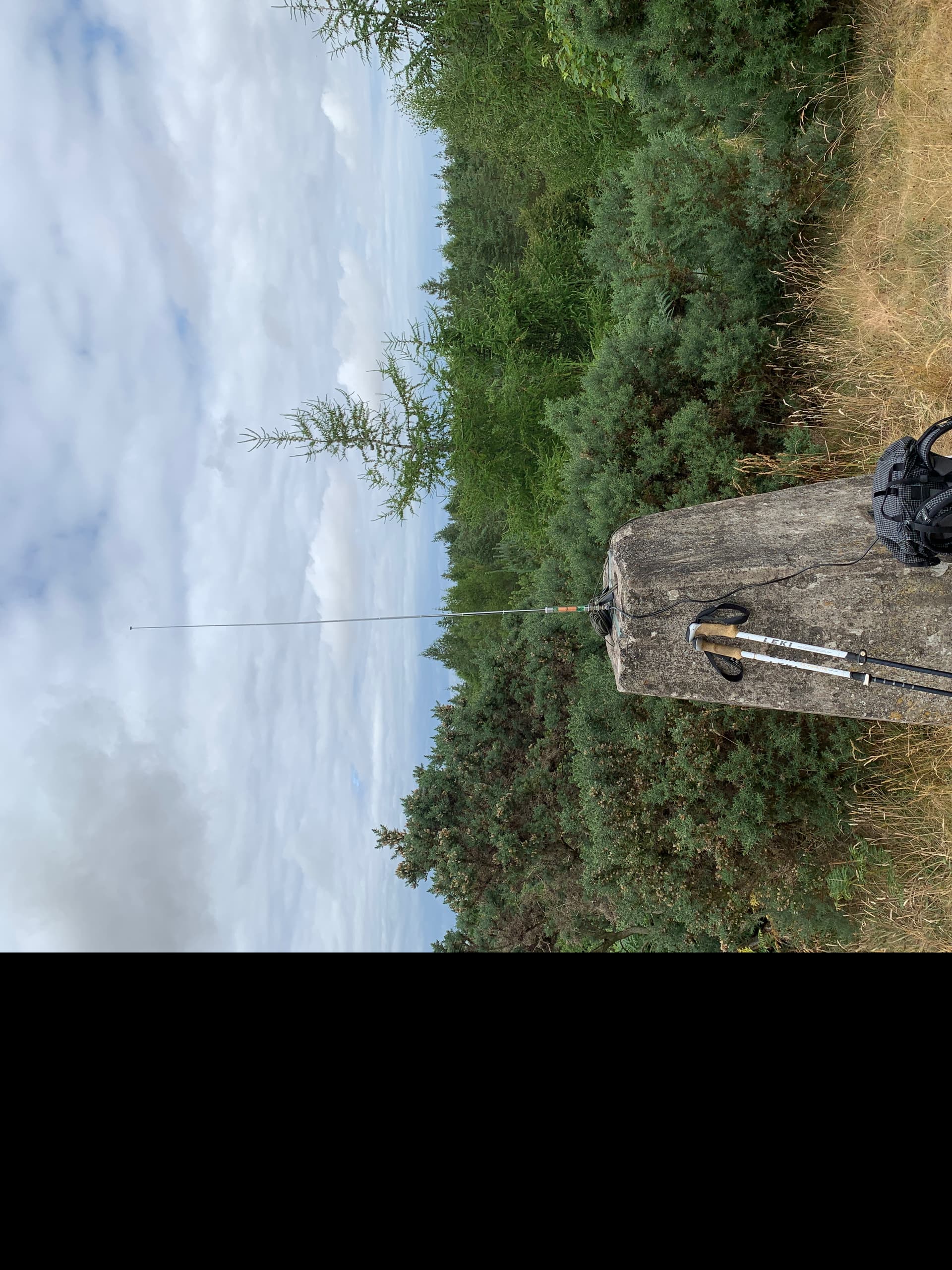 I utilised some paracord to secure the small camera tripod to the trig point. 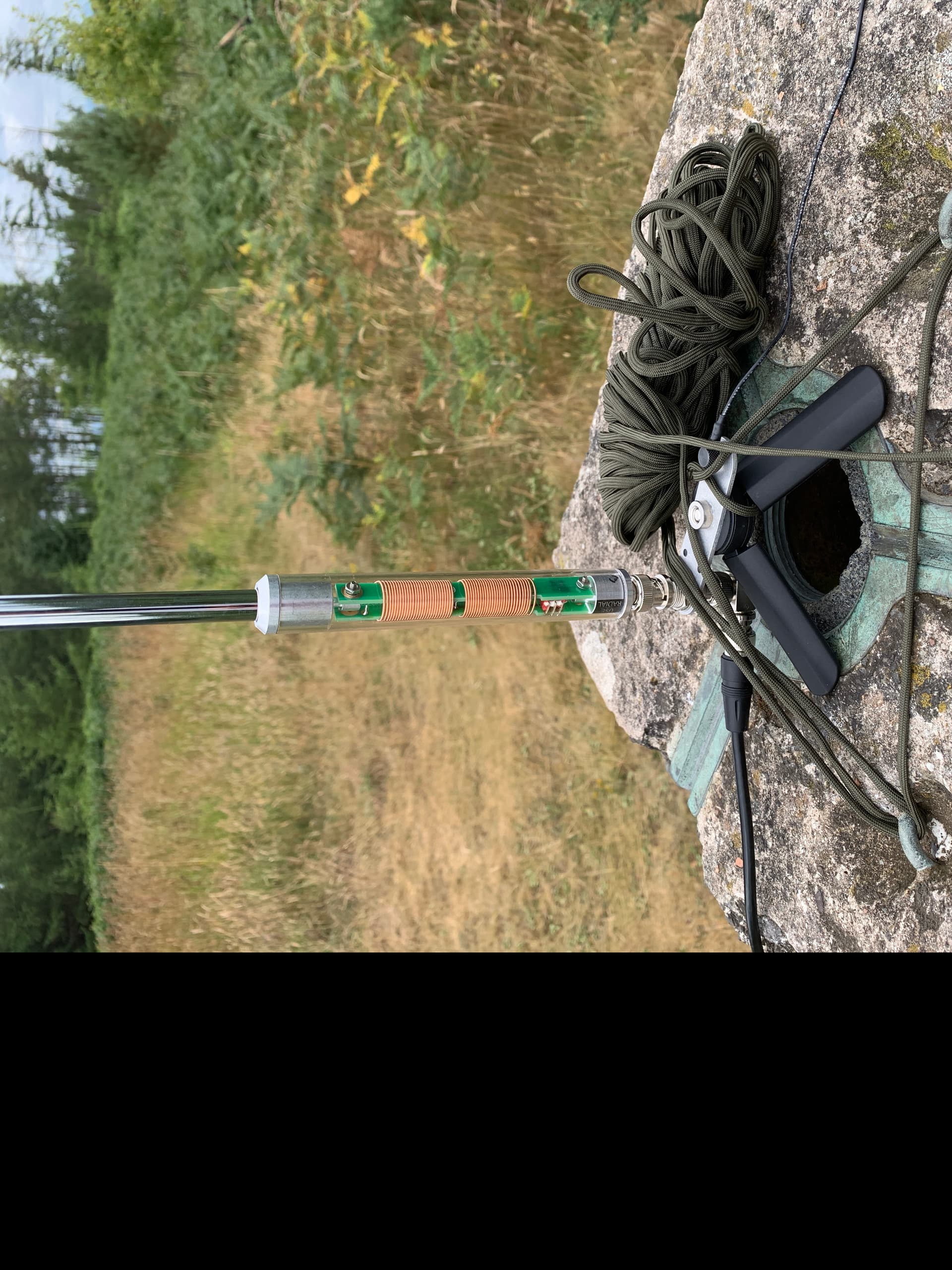 I quickly had four contacts on 20m but keen to push the AX1 I fitted the extension and went down to 40m getting a UK QSO. I know some people are sceptical of these wee aerials but I’ve generally got what I needed out of them. 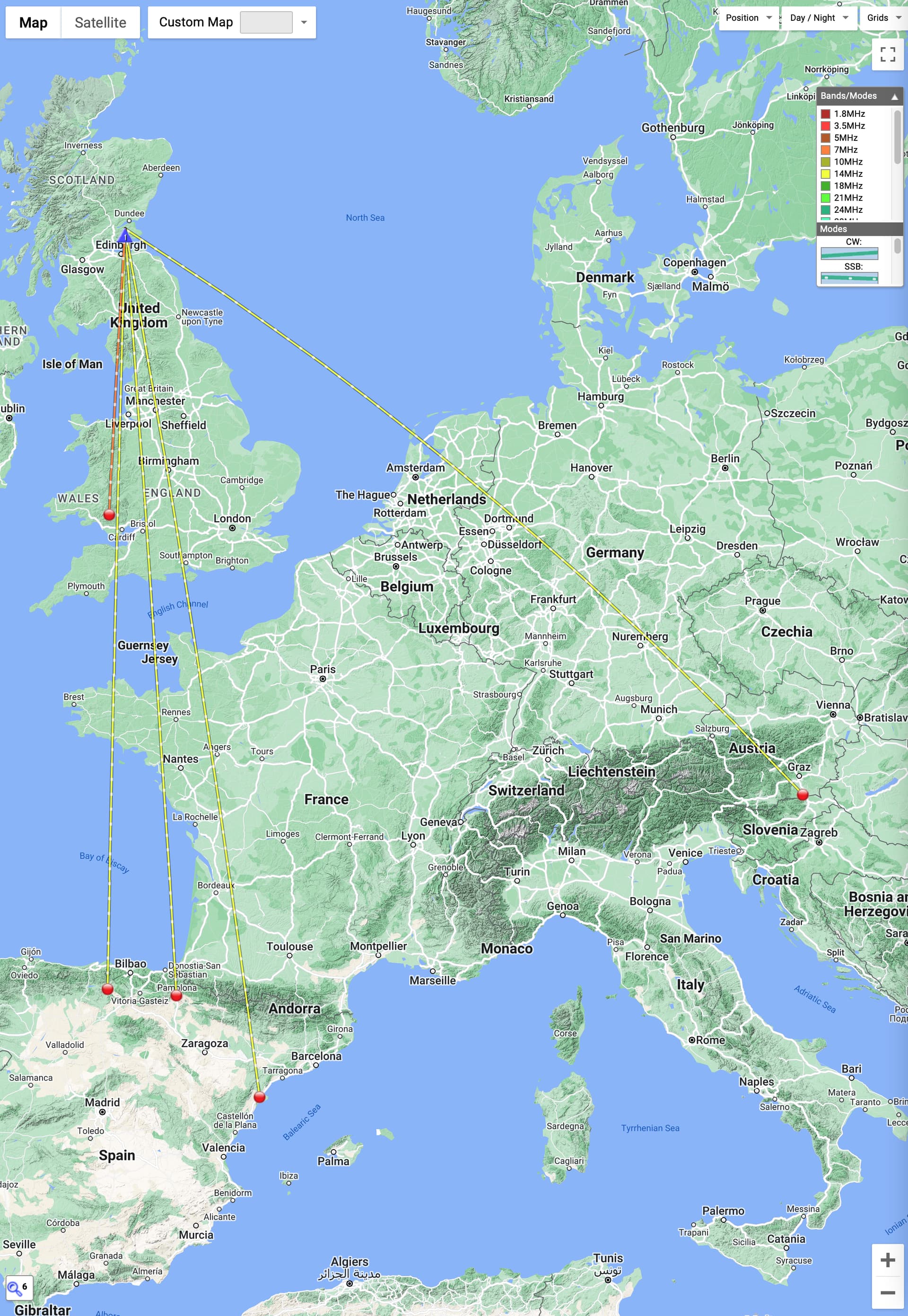 By now I was quite tired, my knee was holding up but the heat was sapping and I came across nowhere to buy a cold drink. I hadn’t eaten either apart from some fruit I had brought with me and some grazing on wild edibles. The strawberry patch I found had the smallest but sweetest wild strawberries. 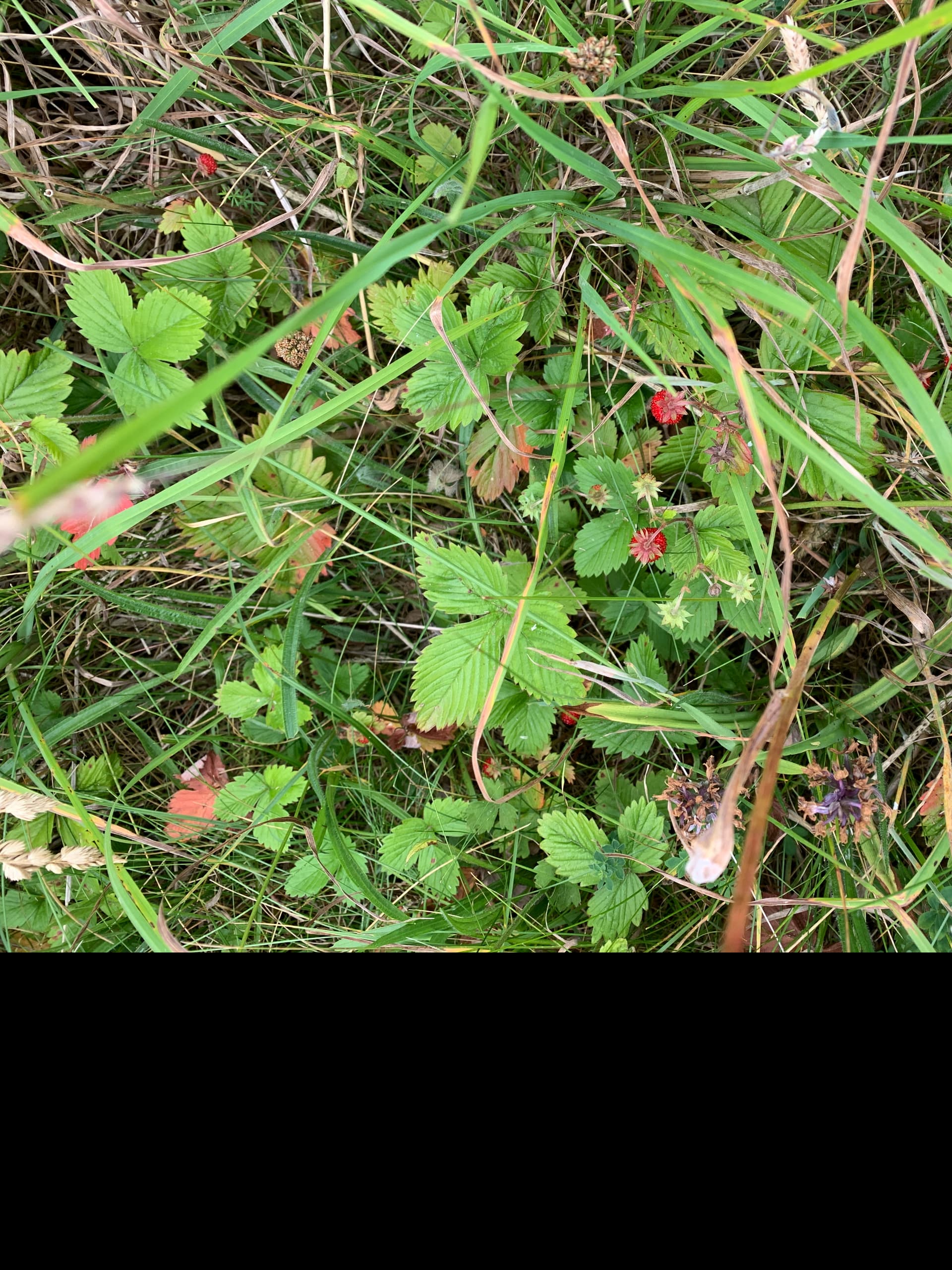 Back in the car again and I headed to my final summit. Again I never recorded a planned activation due to parking concerns and honestly I was seriously thinking of heading home.

I’d done some searching for routes up Cairnie hill and came across one on WalkHighlands but they’d been challenged with cattle in the field. I elected for a shorter and steeper route starting near Woodmill Mains to the south of Lindores Loch. I perched my car in the access point to the field and new logging/farming road. The road was obviously new off rough stone to give access to the forested parts but I never saw a soul. What I did see was hedgerows of raspberries and wild cherries. The cherries were shop quality and so sweet. 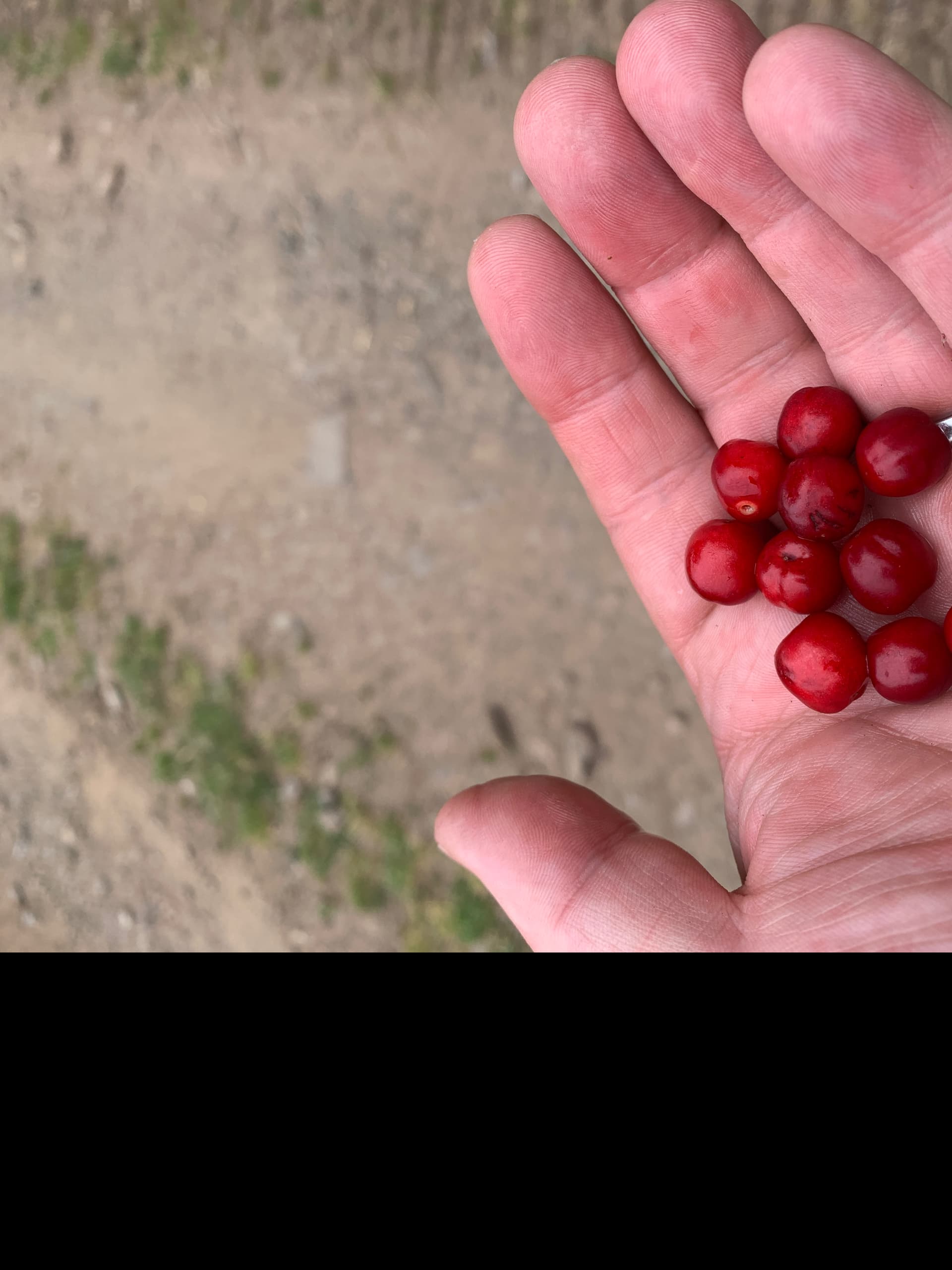 The stones underfoot were dusty and it made for heavy going but there was no bushwhacking involved and was a bit cooler. Coming off the new road there was a farm track across the top of Cairnie hill to the tumulus. It’s not marked on the OS Map but it’s very apparent. Judging from the number of tree sites this is used quite a bit for deer hunting so bear that in mind if heading early morning and late evening. The final route to the tumulus follows the path to the east of the Tumulus and then it’s another apparent path through the ferns to the summit which is clear but next to a forested area.

I didn’t want to mess around and fiddle about so I went for the Bandspringer again setting up next to the Tumulus. 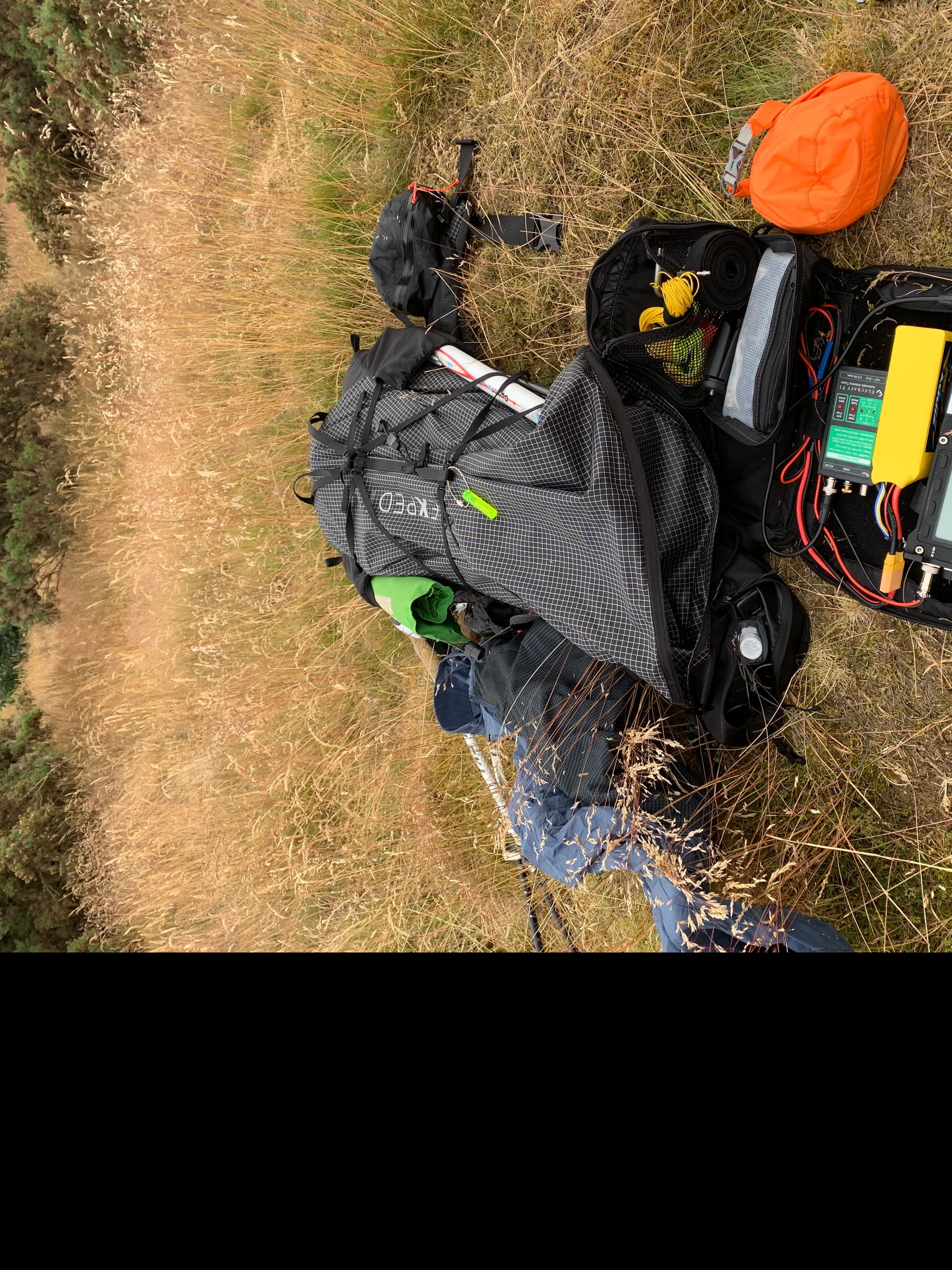 I had trouble getting it tuned up on 40m for some reason so I stuck with 20m and had seven QSO’s in 15m. Very tired by now I packed up and headed home. 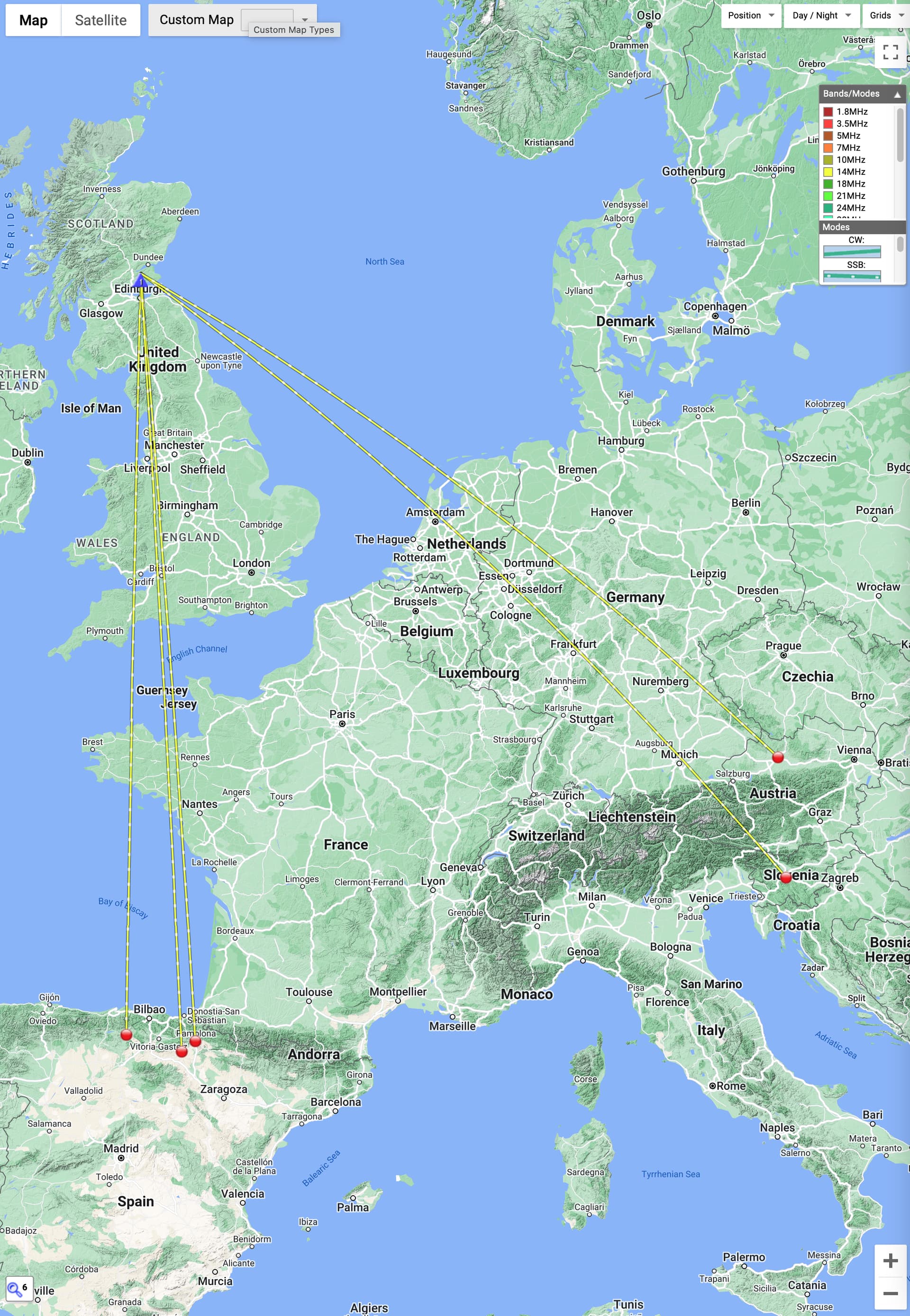 All in all a good day. I was tired but very happy and clustering those three together definitely made it all worthwhile. This was my first multiple summit activation and was thoroughly enjoyable. I’ve a few more summits I want to do in Fife but if you’re there and have the better part of a day I’d recommend them. It took about 6.5hrs in total, 8.8km and 433m ascent, but I’m not a speedy walker.

Nice report! Nice to see a bit of foraging keeping your energy levels up!

When ever anyone asks me, from pretty much anywhere in central Scotland, “what’s that hill over there in the distance?”, I normally reply, “Schiehallion”, without even looking up.

These are a pleasant trio of summits which I very much enjoyed. I was surprised to see that it is 7 years since Paul G4MD and I activated these on our 20 summit Perth based rush-around. As Jimmy says doing Largo Law beforehand makes a decent day, certainly when you’re without a sore knee. Well done under the circumstances.

The monument inscription on Mount Hill apparently reads: “To perpetuate the memory of John Fourth Earl of Hopetoun who died 16 August 1823, this memorial is erected by the inhabitants of Fife MDCCCXXVI”. Not as though it can be read from the photo that I took. 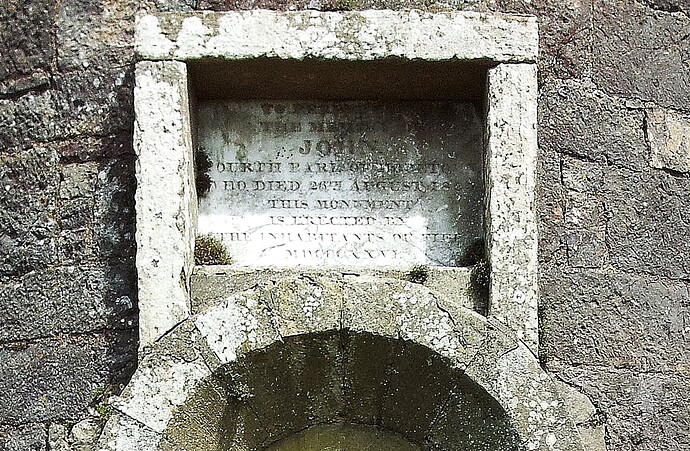 One of the highlights of our trip was being treated to a very close encounter with a large group of Swifts as we made our descent from Cairnie Hill, our presence disturbing many insects for them to pick off… sometimes so close as to make us duck.

Last time I was up in Scotland I found a bush with these fruits on. Very tasty 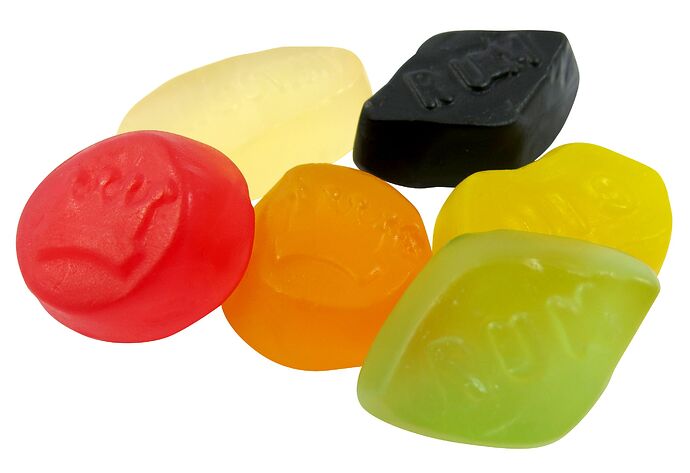