Hello, I am asking you these questions about far field analysis of antennas on the tops because I did not find literature on this. All the analyzes that I have seen are carried out on flat ground. Where NVIS behavior is expected for a dipole in the 40m band using a 6m pole. However I think we can’t use the same analysis for a mountain or can we? So one of my questions is: can we always expect the same form of radiation field at the summits? 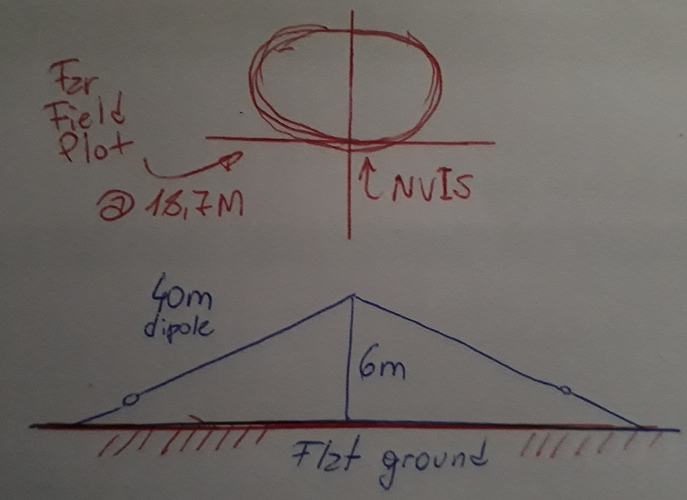 20200630_0309253357×2442 3.16 MB
According to what I have read, a mountain top in summer can be dry and mineral-free as it washes away in the rains and snowfalls in the other seasons. What if the summit has small dimensions comparable to those of far field radiation? 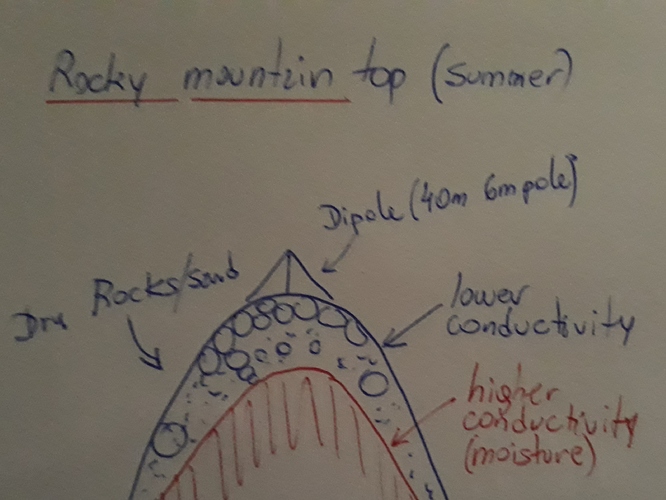 20200630_0310333193×2395 2.92 MB
What will the shape of the radiation pattern be like? Can it be compared to that obtained with a base tower? Although I suppose that in the near field we obtain losses by absorption in the rocks.
I found this field calculator:
https://www.everythingrf.com/rf-calculators/antenna-near-field-distance-calculator 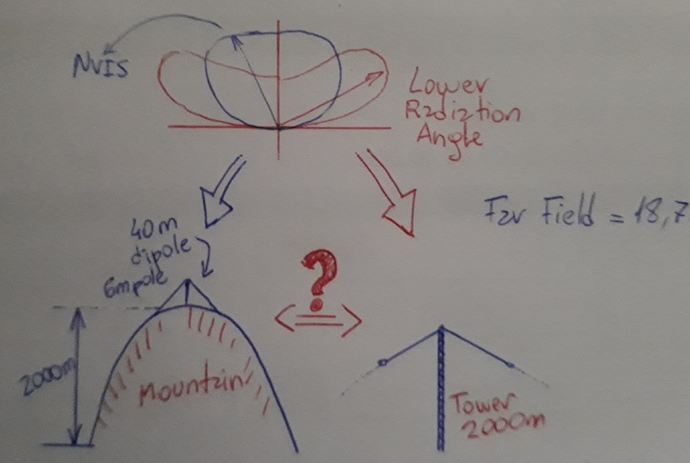 20200630_0309563791×2548 3.57 MB
I suppose the situation will be different when it is a flat top, in which case, we can expect a little more moisture in the soil, but even so I think we will not have much conductivity due to the effect of the rains. So I ask one other question, will it be a better scenario to use a vertical? 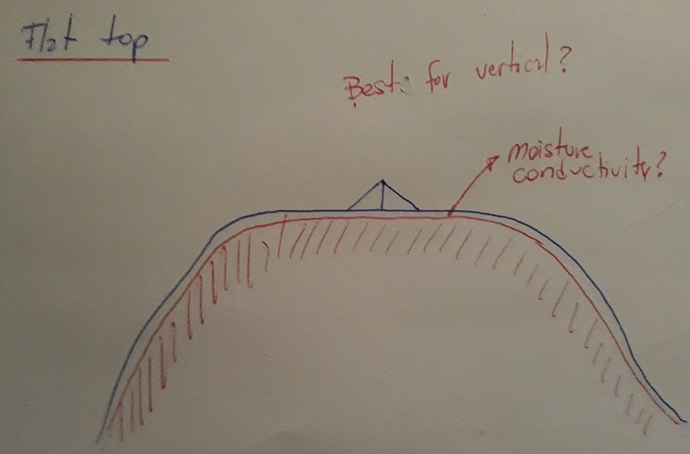 Hi,
Ignoring the ground and radiation patterns for a moment, one thing that you may have overlooked (many do) - is that NVIS communications only work when the Critical frequency (foF2) in the Ionosphere is high enough. At present, generally it hangs around 3.5-4MHz at the bottom of a solar cycle - occasionally getting up to 5 MHz.

So at the moment operating NVIS on 40m is unlikely - you need the solar flux to come up quite a bit before that will happen.

Looking at you questions about propagation on a hill-top as apposed to on the plains, I think the points you make about the actual ground being different are most relevant rather than the height advantage.If using an Inverted-V dipole, as many of us do, the ground will apply more or less capacitive loading to the ends of the dipole wire, hence affecting its resonant frequency. On a narrow band such as 60m this can have an adverse effect. 40m & 20m tend to be less critical and a lot depends upon how “wide” an antenna is in any case. A dipole is quite forgiving as it has a relatively wide bandwidth, whereas a magnetic loop would not be (which is why one is constantly tuning a mag loop when you change locations).

As a general answer to your question - In my experience the radiation patterns you get on a summit are very similar to what you get on the plain. What is important is that you have less obstructions when operating from a summit and most important, the reduction in metro-noise when you go to a summit can be 2-3 S-points or more, especially if your hime QTH is in a large town.

Indeed! Thank goodness for 80 and 60 Meters!

to get an understanding of this you should be looking at the HFTA software by N6BV, included in the ARRL Antenna Handbooks for the last 25 years. You can manually build a terrain profile (using spot heights + distance) for an azimuth from different types of summit. You can even go out a few Km if you want. Then make a low horizontal dipole for your band of interest, you can start to see how they perform and match to typical F2 take off angles for a circuit.
Google will give you lots of information, including HFTA instructions below.

I did a few studies when I started SOTA, as Ed says you can forget NVIS on 40m at mid latitudes except for solar maxima. Soil type + wet vs dry has a small effect on the overall radiation pattern.
For a very low dipole most of the radiation is straight up and you don’t see any useful ground reflection gain, except if you put your 6m pole right on the edge of a cliff.

That’s why for SOTA you do not see any big difference between people using a low dipole vs a vertical with high ground losses. Both are pretty inefficient at low angles.

Good luck, its an interesting topic to explore
73 Gavin
GM0GAV

Thanks! I Will check HFTA software!. I never before sota experimenting with low dipole, I thought I have been under NVIS efect on 40m band at about 10:00 to 13:00. I always do contacts with good signal reports around 500 to 800km away.
What you said about the antenna over the cliff its because the ground effect on radiating near field? Very interesting
73!

This is testing my memory, but my recollection from the antenna book is that the quality of the ground is far less important for a horizontally polarized Electromagnetic wave than a vertically polarized wave. Thus whether it is rock or rich clay has less effect. Antenna height is far more significant to the radiation pattern. I agree that elevation of operating position itself should not matter. Theoretically and all else being equal, I would think it more advantageous for distance to be at a lower elevation as the wave should travel farther to its first bounce off the ionosphere.

Anecdotally, placing the dipole right on the edge of a cliff seems to result in further HF contacts.

But my favorite is having the dipole on a hill without obstructions. I am highly confident that the reflection is favorable and results in stronger signals in the direction of the slope many times. The Antenna Book discusses this to some degree but notes it is a complex subject based on the terrain, angles, and so forth.

I just know from my experience that I have experienced favorable increases in signal reports multiple times when set up on a “clean” slope that is not too steep or very shallow. Although this last Field Day I was set up next to a lake and despite the lake to the south being off the end of my dipole, I could hear the stations to the south much louder and my Reverse Beacon Network results were significantly higher to the south. Obviously I had gain from reflection off the lake.

So when trying to get another continent for SOTA I aim for higher antenna height and a nice slope in the direction I am trying to reach. 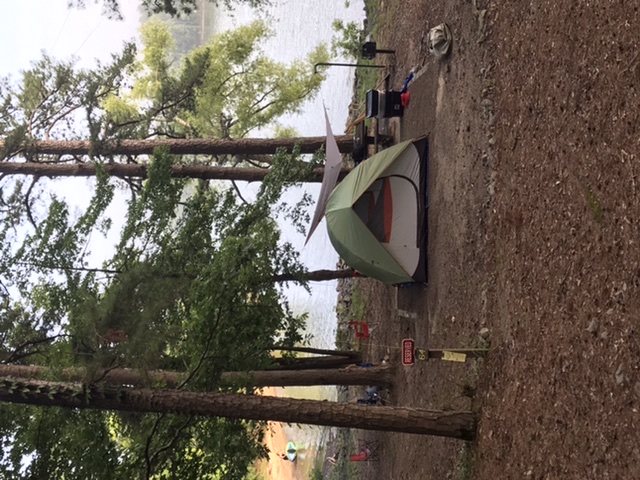 The signal doesn’t “bounce” off the ionosphere. It is refracted, bent. I also submit there is no way that there are multiple “hops.” - fred KT5X (aka WS0TA)

The signal doesn’t “bounce” off the ionosphere. It is refracted, bent

You are correct, but, in simple terms using reflection as the concept of how radio waves get returned from the ionosphere is adequate to explain the phenomenon. Just like the analogy that thicker cables can carry more current like a bigger diameter pipe carries more fluid. The analogies are useful for people who need a basic or beginners view and they can move to more accurate explanations when they move beyond basics.

I also submit there is no way that there are multiple “hops.”

That’s above my Mathematical abilities, but given the Range in height of the F layer, curvature of the earth, and potential takeoff angle, people much smarter than me have said the ranges we routinely get in HF propagation require more than one skip, hop, bounce, reflection, bend — whatever label Is used. As I see it that must be the case unless the RF is Travelling as is described by a Pedersen Ray. Additionally, it has been shown than RF can reflect off ground/water, so that makes sense to me.

misses the point. If it is refracted, it can be bent along the curvature and come down any distance away. when one thinks about signal coming down, “bouncing” off a very rough and imperfect surface, the ground, where mostly it is going to be scattered, not reflected, then go on to bounce again, and still be S-9 … just doesn’t make sense (to me). - fred kt5x

As I thought, word games.