An early start (by our standards anyway had us leaving the campsite at 08:30 this morning for a 20 minute drive to a small car park below the Beacons Reservoir. Here Charlie the dog had a quick walk and afterwards we had breakfast.

I had packed all the radio gear into my rucksack last night so all we had to do was fill the water bottles, slap on sunscreen and put on boots. Leaving the van at 09:30 it took us (me, wife Mary and Charlie) until 10:40 to reach the summit of Fan Fawr, 734m according to the OS map. It isn’t a particularly striking hill, here it is viewed from just below the summit from the path. The start of the path is indistinct. To find it exit the car park, turn right and just after the cattle grid on the road there is a prominent manhole cover. The path starts here but it isn’t really visible until you have walked parallel with the trees on your right a little way when it can be seen stretching up the hill. This approach isn’t the shortest route but it is well graded. If you start from further north where everyone parks for Pen y Fan it is a much steeper approach. Many thanks to GW4VPX for this tip. 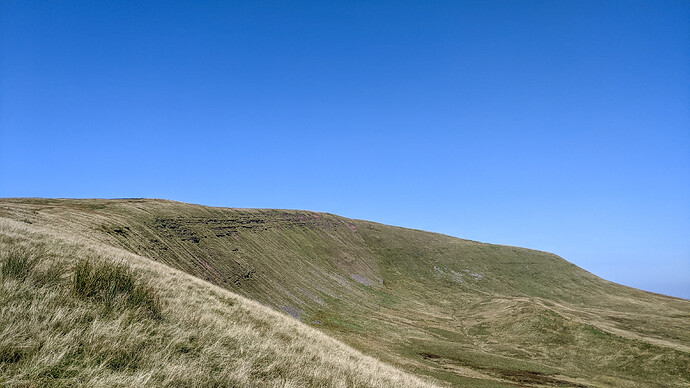 On the other side of the valley is the popular Pen y Fan. You can see the very well worn path up to it, although that distinctive summit isn’t Pen y Fan but Corn Du. The summit of Pen y Fan looks almost identical but is 500m behind Corn Du and at 886m high only 13m higher than Corn Du. 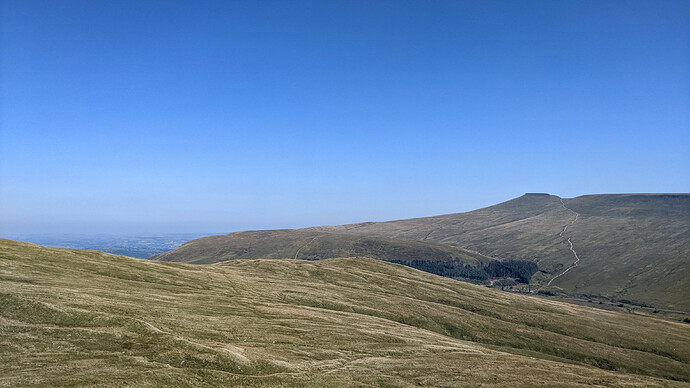 This is the area we were in. The wording “A4059 Recently viewed” is where we parked, below the reservoir. To the north west there is an unnamed hill, this is Fan Fawr GW/SW-005. 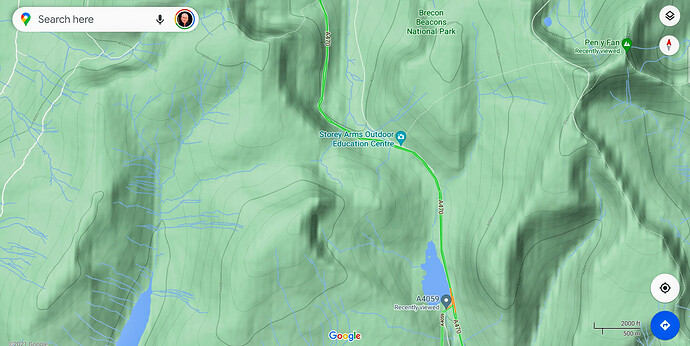 At the summit of our more modest (but much quieter) hill I set up the radio gear.

I carry too much stuff!

I intended to try 40m SSB first but I was seriously delayed finding a mobile signal so I could post on the SOTA website my frequency and location. Eventually I found one particular place on the edge overlooking the reservoir and put up a spot.

It was a bit of a struggle but I managed four QSOs, ON4CB, ON3UA, EA2CKX and Manuel EA2DT who gave me a 42 signal report. Four QSOs meant I had qualified my first Welsh summit so after this I could relax.

I had a look at 20m but it was very quiet. If the mobile signal had been better I would have tried it but instead, and conscious of the time, I took down the wire antenna and hoisted my 2m Slim Jim and gave out a CQ SOTA call on 145.450MHz FM after jumping through the hoops again trying to connect to the Internet.

I’m a bit of a 2m novice and so can’t really judge where my experience sits on the good or bad scale but I am fairly certain it was towards the good end.

Best QSO was a summit to summit with M7MCG/P who was on the top of Fountains Fell in the North Pennines. I haven’t worked out the distance but it must be at least 150 miles. (edit: 267 Km according to the S2S log). In the opposite direction GU3TUX in Alderney was my first ever Channel Islands contact. A total of twelve 2m QSOs were made, many from Wales but also Devon and Cheshire. For a band and mode normally limited to just a few miles a bit of elevation and a good antenna certainly made a difference. 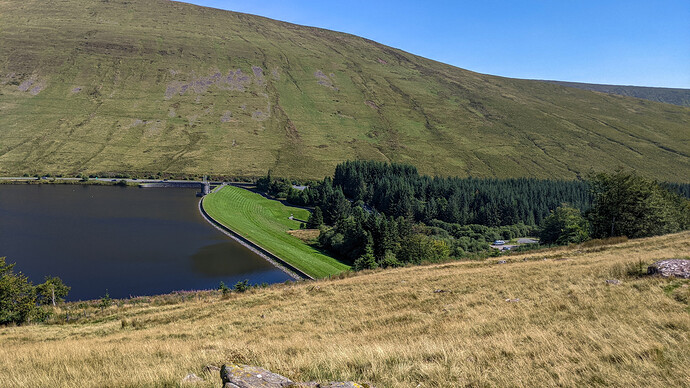 The photo above shows the dam and in the clearing on the right you might just be able to make out our campervan. I took the shot as we returned down the path - it’s always reassuring to see your vehicle still there!

We got back at almost exactly 13:00 and ate our lunch before returning to the site. The site features a dog washing point although Charlie wasn’t hugely pleased to experience it but that’s his fault for finding a very muddy puddle to cool off in.

I haven’t worked out the distance

Don’t have to, the database will tell you.

Really? Must be something wrong with your gear.

The sky is too blue… it will do you no good!

Really? Must be something wrong with your gear.

I’m not sure I worded that very well! I think it’s because I’ve come into this (SOTA) with the entirely unfounded prejudice that 2m is a sort of “walky talky” mode, suitable only for short range.

Today’s experience has converted me. To the extent I think I will start with 2m this weekend in the LD and also try my little 3 element 70cm Yagi too.

And thank you for pointing me at the summit to summit distance. I found the figure in the S2S log - 267 Km in this case.

2m doesn’t suffer the solar vagueries of HF, but conditions can still be poor at times. I enjoy 2m SSB and regularly work Don G0RQL in Devon from summits in Scotland. The last time out the distance was 615km. Well worth giving the band a try… on both modes!

Thanks for the nice report and photos. I went up there last week for an activation and it was fair to say that blue sky was in short supply! I parked at the Storey Arms car park so ended up having to navigate that very steep bit on the final approach to the summit. I’ll try your starting point and route next time. Looks like a much more gentle ascent.
73 - Matthew M0JSB

Today’s experience has converted me. To the extent I think I will start with 2m this weekend in the LD

I’ve always found the LD region to be really good on 2m FM (haven’t tried 2m SSB so can’t comment on that).

There seems to be quite a following on 2m FM around the LD & Pennines regions. In the past I’ve done mid-week activations & had pileups on 2m FM which have taken me 30-40 minutes or more to clear!

Thanks James, great video; good job with the pile up.Tell me what was the radio you used?

Hi Geoff, sorry for being slow to reply. The radio was an Icom IC-E92D