A family trip from Pamplona to Alicante (abt 650 Km) from last Sunday to Wednesday this week, 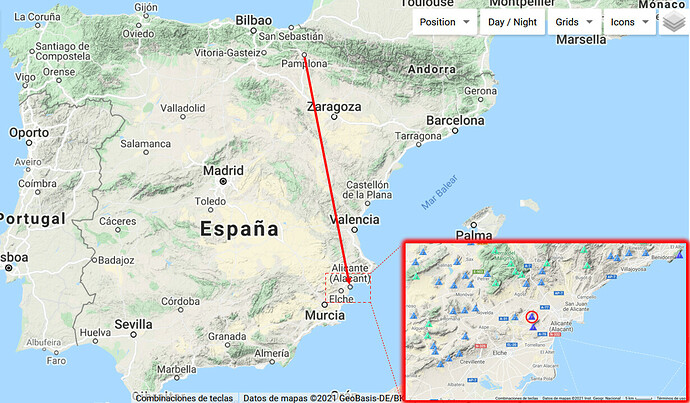 imagen1230×719 292 KB
gave me the oportunity to check before departure for potential SOTA Completes in the EA5/AT area.
I found pretty close the 1 pointer EA5/AT-099, which I had chased once in February this year, so this would clearly be my target for a complete:

A closer look on SOTAmaps revealed something like a road or some type of track which I may be able to drive with my car and then hike just the final part to the summit: 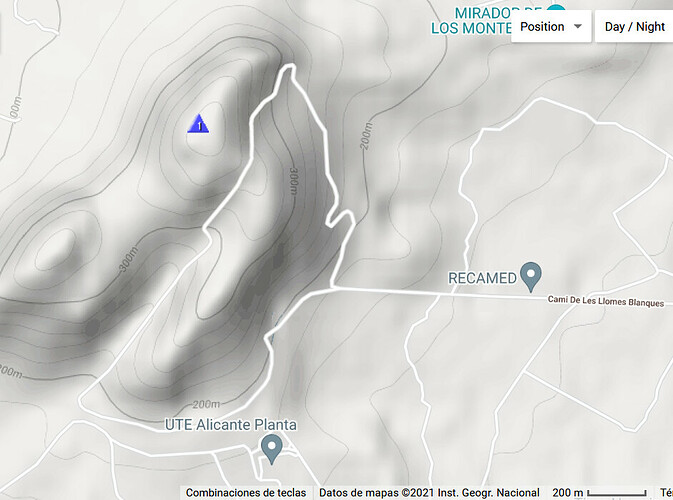 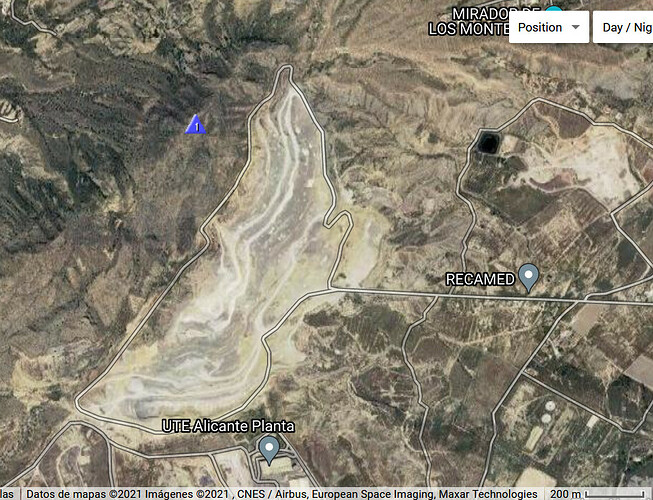 We travelled on Sunday and I agreed with my children that I would try a quick SOTA activation on Monday morning while they would still be sleeping and slowly waking up at the hotel.

I had previously taken the Lat/Long coordinates of the point where that road started its ascent from the base of the mountain, so I drove from the hotel the 11 Km to that point after having raised an Alert on SOTAwatch.

My fears got confirmed and there was a gypsum quarry there with machines and trucks working inside, plus a clear sign at the fence gate of the access road forbidding pass to the quarry to any non authorised people. So I parked my car outside of the quarry perimeter fence and started walking around looking for a possible approach from the side.

My car got parked where the red star is on the following image and the dashed lines show the access route I wanted to try: 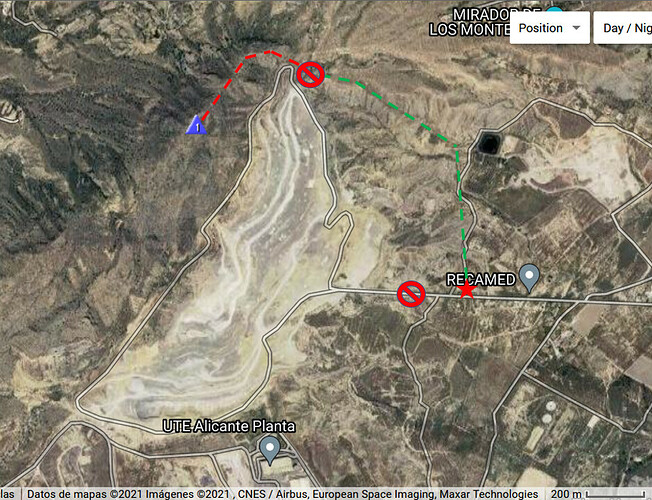 This is how the mountain looked like soon after having started my hike:

The landscape is very different to what I usually have in the EA2/NV area at the North of Pamplona and it resembles pretty much the one in the Bardenas Reales desert at the South of Navarra (EA2/NV): 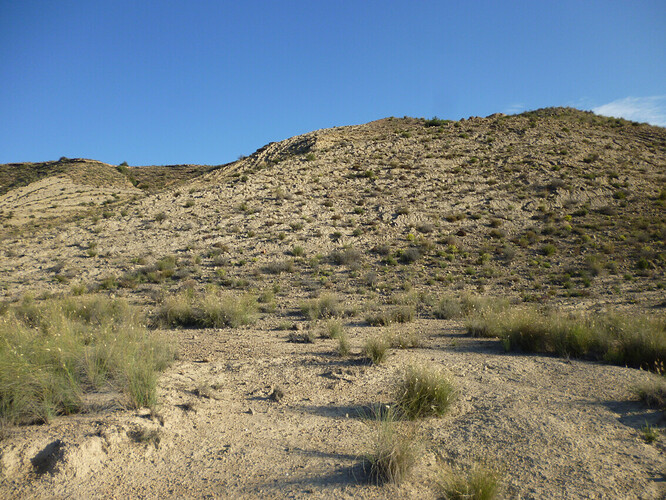 As I gained some elevation, I took this view looking back to where I left my car parked: 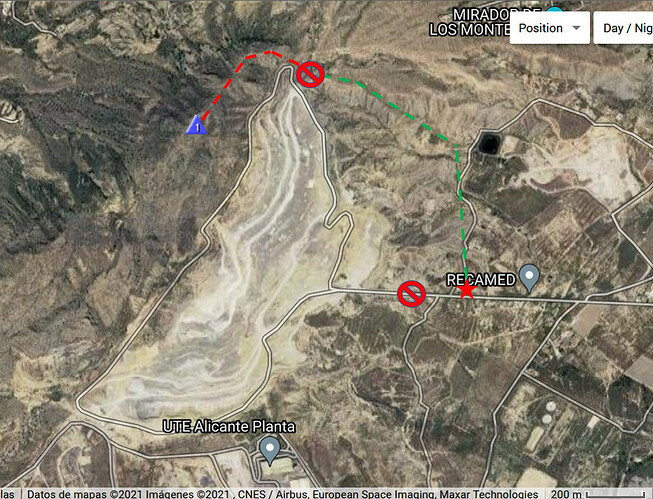 Here I decided it would take me too much time and effort to descend and ascend back through a different path, even without having any guarantees about a possible success, so it was time to withdraw and get back to the hotel.

A couple of panoramic views before descending:

After descend, I drove back to the hotel, to rejoin my children and forget SOTA for the rest of the day and all our time in the coast. All we did was enjoying the warmth, sunshine and some of the beaches in the area: 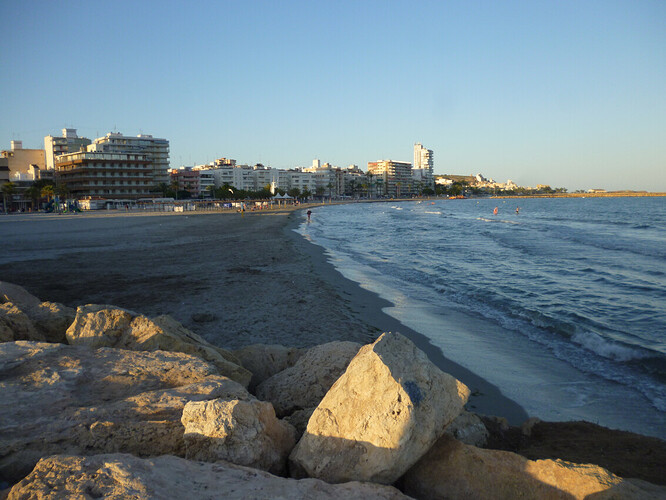 as well as the always delicious seafood paellas in some of the many nice places by the sea shore: 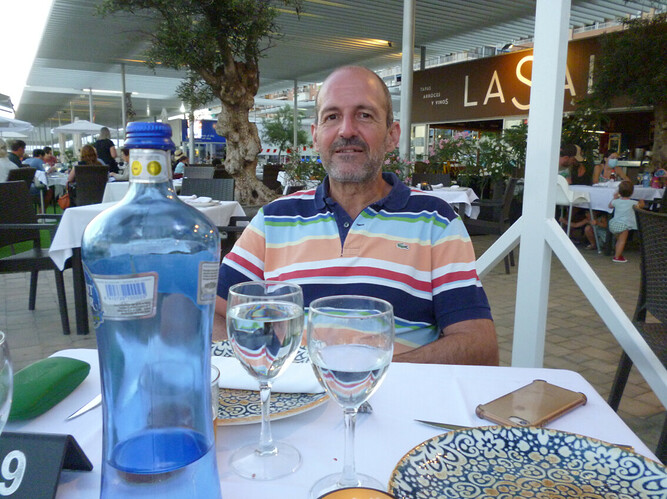 It wasn’t possible for me to activate this summit this time, but I guess I’ll be back there some time in the future and I’ll try it again after having contacted with @EA5IYL for advise, as he has already activated this summit 3 times.

Guru
P.D. the drive back to Pamplona was fine yesterday and we passed from the warmth and sunny coastal weather to the cloudy sky and 15º C of the Pyrenees area: 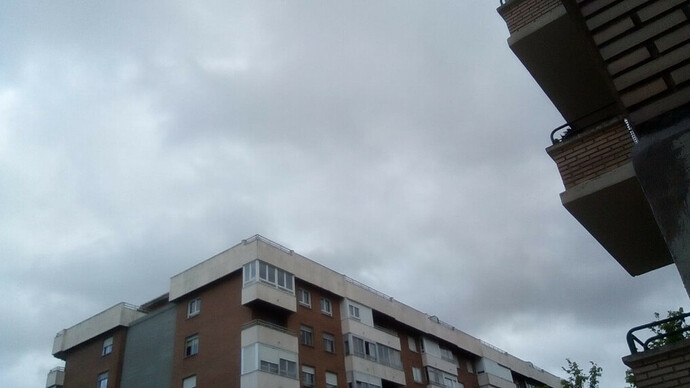 That’s disappointing. From the map you may have to come from the west. There are a couple of tracks on the left of you maps showing your track.

But it is steep from that side!

you may have to come from the west

You are right, John, that’s what I’ll do next time. Yes, it looks like there are some quite steep slopes, also from the East side.
I love the Google street view you’ve posted because I can zoom in and out or move around right on the image of your post. I didn’t know this was possible. There are so many things I don’t know and so little time to learn…
73,

Hi Guru, very disappointing for you, next time then

At least you had a nice time with your kids. Great photo of you, you look well. Take care.

At least you had a nice time with your kids

…it’s a bit of a family adventure outing and certainly something to remember longer than a normal hike to an activation.

In this respect, it was a good day.

I have activated local summit Serra Mitjana EA5/AT-099 three times, one of them with a 40-m-band Pixie. I had actually given some hints about my route in SOTLAS (the information, I got it from this webpage: Untitled ). I am currently recovering from a doubly-sprained left ankle (yes, SotA accident after the first activation of EA5/AT-082), but next time you come close to IM98, give me a shout!

Hi Mikel,
Thanks for posting.
If everything goes to plan, I should be back in the area in 9 days for a whole week. I’ll be again with my 3 children, but we should be able to find some time to meet up.
I’d like to try a new activation of Serra Mitjana because that will give me my first Complete in EA5/AT.
I’ve been strugglying with some digestion problems over the last few days, but after some days not having any food and having restarted my meals with much care and little quantities, it looks like things are on their way back to normal.
I’ll be staying in Puerto Marino, between Alicante city and Santa Pola.
I’ll be looking forward to meeting you there between the 15th and the 20th of July.
73,

next time you come close to IM98, give me a shout!

Hi Mikel,
There has been an unexpected plan change and I’ve had to cancel my trip to Alicante next week. The reason is related to my already mentionned digestion problems, which are apparently linked with my cancer.
I’m writting these lines from the Urgency service of Navarra hospital.
It looks like I’ll have to wait to meet you and that pending activation of Serra Mitjana.
73,

Guru, I wish you all possible strength and positive energy on your way to recovery.
73 Chris

I am sorry to read that your health has worsened again.

I wish you all the best and a speedy recovery.

I look forward to meeting you in September.

I am very sorry to read about your hospital stay, Guru, and wish you every strength to overcome the health issue very soon!

I am so sorry to hear about the digestion problem that you are having Guru. I hope that the medical team quickly find out the reason for the problem, get you on the road to recovery and that you are soon well again.

Guru,
I’m sure we all, including those who know you personally and all who have contacted you on the radio or even conversed on this reflector, want you to fully recover as soon as possible. Good luck and our best wishes.
Andrew VK1DA/VK2UH

Guru, I read with regret that your health has deteriorated again. I sincerely wish you a speedy recovery. SOTA enthusiasts in the South Urals are waiting for a QSO with EA2IF!
73
Vlad
RX9WT

I’m very sorry to hear your news. But the summit will still be there when you are fit again.

I’m very sorry to hear about your health issues.
I wish you a fast recovery, a lot of strength and I hope to hear you soon again on the bands.

Thanks all for your kind words and good wishes. I’m still at the hospital but feeling much better than on my arrival to the emergency dept. yesterday.
After having thrown out plus a nasogastric tube which has been draining out all the stuck contents in my stomach, I’m feeling much better now.
They are going to take me for a scan now, as they need to see those swollen limph nodes which are apparently causing the obstruction of my digestive transit. We’ll see what they find and what the solution will be.
Don’t worry, I’m in good hands and I hope to be back playing SOTA again pretty soon.
Thanks again and 73,

I hope to be back playing SOTA again pretty soon.

Hi Guru, I hope the hospital get your problem sorted.

I look forward to getting you in my log again soon.

Hello Guru, good to hear you are getting better