hello i dont always promote our facebook page on other sites i like others to promote it by word of mouth, you can always follow the https://www.facebook.com/groups/37631909313/ link at the top of the page,
if you add your self to the group and not added within 2 days please check your message inbox,
best regards from Steven m0sgb
also a massive happy birthday to all on sota 15 year (been active for 13 years) my self
de m0sgb

Hi, Steve, when I try to connect I get this message:

Sorry, this content isn’t available at the moment
The link you followed may have expired, or the Page may only be visible to an audience that you aren’t in.

Am I blocked for some reason?

Am I blocked for some reason?

Works ok here Brian and I am not even on Facebook…

Very odd, Mike! I can’t understand it. Of course, I am banned from the SOTA(Free Expression) page, as is all the MT (perhaps they feel that having the MT around will choke off free expression!

) but at least I can read that page. For me it is just as if this Facebook page doesn’t exist!

Very sad that Brian, I thought this was a branch of a hobby, unless there is a technical reason for it. Can’t see why someone who puts so much into it to help others in our hobby would be so treated. Have you tried a different browser?

Like Mike I can also see the Facebook page but have no desire to join it as there are only so many hours in the day, and there is plenty to entertain me elsewhere. I have a Facebook account but the last time I posted something on there was in 2012.

hi brian no idea why you cant see the group, if you have tried the link and got nowhere, then have you tried clicking the facebook tab at top of page

also if there is nothing on your facebook profile saying your into radio or sota, you will get a personnel message which you will be asked questions, please check your other messages

It look to me as if you have to be a Facebook member before you can view text on the page - otherwise it is greyed out - see below (this was with the latest Firefox Browser): 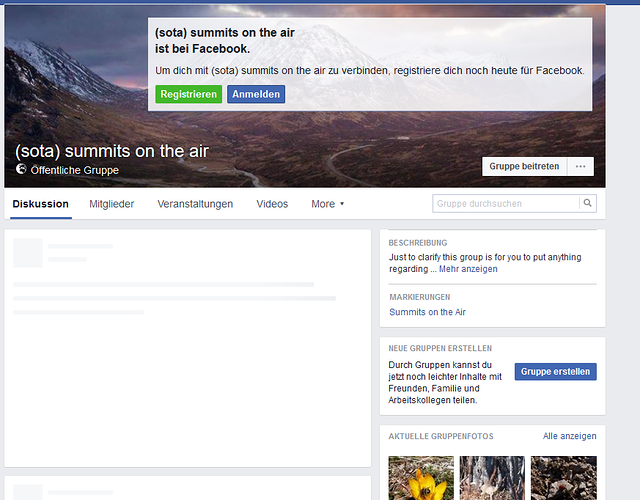 I ditched F-Book as a platform because of it’s abuse of IT security many years ago and deleted my account there. I have no intention of joining again.

Yes, you are right. Security on Facebook is appalling. It is very easy to create fake untraceable accounts which can be used for nefarious means. Many people do not realise it until it is too late but many of them are filling up our prisons as a result of what they have done using Facebook and other types of social media.

Great that they are being caught!

In the early days of facebook, there were rumours of actions within the company with users information being possibly sold. These rumours were never proved however in the IT industry when these stories come out, most professionals stay well clear of the service. “Mud Sticks”.

At the end of the day it’s a communications platform. It is open to abuse - as are others - like talking, print, phones, email. amateur radio etc. It’s up to the user to demonstrate common sense, protect their own privacy and configure settings accordingly.

I use Facebook as my platform of choice for most of my professional communications, promotion, file sharing, conferencing etc. I use it for socialising with a small group of family and friends - and little else.

Steve M0SGB deserves much thanks for many years of running the official SOTA Facebook group, as it offers a way of sharing ideas and activation photos/videos that some find more convenient.

It’s up to the user to demonstrate common sense, protect their own privacy and configure settings accordingly.

Not wanting to turn this into a facebook commenting thread, there are enough of those, however you’ve touched on exactly the point that was knorring in Facebooks early days. The facebook employees used to add personal security settings way down in the menu structure and then set them by DEFAULT to approved - for example “facebook can pass your email address to our partners” or “all posts are to be public and visible” etc. etc.

Then when users complained, theses were set to default to off, only to be replaced by settings 6 months later in a different buried menu that would do the same or a very similar thing. This went on for over 2 years.

As a platform for commercial advertising to Joe Public, Facebook is fine as companies WANT all the information they post to be available to all and to be passed on as far as possible. Individuals don’t always want this but the best rule to go by in any case, is that anything one posts on the Internet should be considered as public property and not able (ever) to be deleted. In that way the user takes responsibility for what she/he posts.

back to the thread - those without a Facebook Id cannot read facebook posts - even those set to public it appears.

I do not have a facebook account and cannot read the page. Not all likely to join facebook as know three people whom had to close their accounts due to stalking, threats and similar.

There are a lot of sick puppies out there.

There are. But are we saying they are exclusive to Facebook, and don’t exist in amateur radio, elsewhere on the internet or in everyday real life?

Steve has provided a welcome facility for SOTA that many enjoy. This thread is about the existence and appreciation of that facility, not for everyone who doesn’t use it to state their objections.

Dead right Tom I found the SOTA FB site very good and thanks to Steve for moderating it so we have some where extra to up load or make extra friends with SOTA in common. To me it is a much more interesting site to have access to than my own boring FB site. Being linked to FB messenger is great too i can msg an activator in real time if we have agreed to be “friends”. A classic example the First Women in America to achieve Mountain Goat was this week. On FB there are pictures of their happy faces showing the excitement along with so many others posts about SOTA activities .
regards
Ian vk5cz

It would be nice if non-facebook-members could view the pages, but I guess that’s a Facebook restriction.

By all accounts in the global news, Facebook have enough problems with not being able to control child pornography content, that allowing views outside of their walled city is probably low down on their action list!!

You don’t need an account. Well you do but it doesn’t have to be real or complete.

You go through the sign-up process making up name, email details etc. and part way through you get sent an email which is needed to complete the sign up. But at this point you have enough of an account that you can see pages which are not private. i.e. FB pages visible to any FB user become visible. But don’t close the tab. If you do then you will not be able to view anything on FB and you will have to “sign-up” again. You have to give a realish email address, I think FB sends a “continue the sign-up” message in the email and it checks it gets delivered. If doesn’t have to be your email address… auto-shipping@amazon.co.uk used to be a good one. It accepts inbound email and then drops it so it doesn’t waste anybody’s time being read!

Or simply have a normal Facebook account with your actual email address, but ramp up the privacy settings to the max and turn off all notifications.

It’s no different to email - you the user is the master of what comes in and out and how it is with dealt with.

More to do with my life than have so called social networks addict me. Enough of a problem with booze - only kidding.

It’s a sad reflection that kids and even adults can’t seem to function these days without their daily/hourly/minute/seconds - fix! And God forbid they should run out of Mobile/Wi-Fi coverage - indeed the end of the World - as they know it!!!

Or simply have a normal Facebook account with your actual email address, but ramp up the privacy settings to the max and turn off all notifications.

FB was untrustworthy years ago when I used to have an account and I have not seen anything (especially given recent reports in the main-line press) to change my impression on that.

Those who wish to publicise something to non FB users will simply have to use more open platforms such as this reflector or an own wordpress site.