Tof and I activated this summit on Friday the 13th but it turned out to be a lucky day for us. I had made an initial recon trip last year but had turned around below the summit due to the dangerous conditions. So this year I was lucky to have Tof, F5UBH, with me as we cheered each other along the way.

The summit itself is on the southern border of the Queyras Regional park and is its highest point at 3,385m. The hike start in the Basse Rua region. As you head towards the Vars ski resort, you take a small mountain road that takes you there. The area is not very well known and a lot more peaceful than other popular nearby alpine valleys. You reach a parking near the Basse Rua mountain hut where the hike starts at an altitude of around 1,760m.

You follow a beautiful little mountain stream called Rif Bel for most of the way. The lower elevations are wooded and shaded. Deer are quite common here. The first part of the hike is very long and gradual. You eventually reach a spot called " l’Oratoire de la Font Sancte " at around 2,280m. You then cross the stream and keep going up the valley. The target is quite obvious as for most of the way during this hike you can see the banana-shaped couloir that leads to the summit. The southern summit of the Font Sancte is a sheer cliff and is jagged. From lower down it seems higher than the northern summit but thankfully it is not the case. 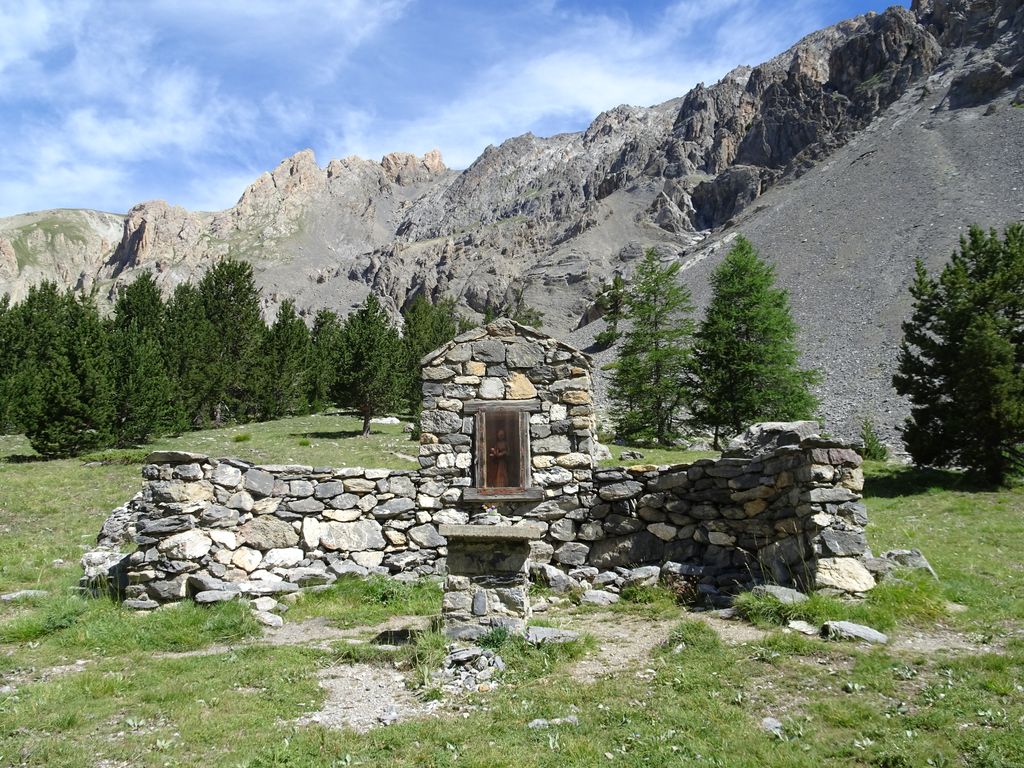 As you go past the Oratoire, you follow the stream for a little bit but then after a little while you head left towards a small lake and the bottom of the couloir while the stream heads right. If you do not have enough water, now is the time to plan very carefully. The ascent of the couloir is very tough and you’ll be gulping the precious fluid a lot faster than you may have anticipated. Once you start hiking into the couloir, your only source of water will be melted snow. so, either bring a stove or plan your water needs very carefully. One of the good things about this entire valley is that there are no sheep and the water is pristine and safe to drink almost everywhere. The lower portion has horses near the Basse Rua mountain hut so you need to be a bit more careful.

At higher elevations we spotted mountain goats called Bouquetins as well as Ptarmigans. The fauna is not very scared of human, it is quite obvious that they do not see many of them and that those that come along this valley leave them alone. So you can end-up walking past a Bouquetin grazing peacefully. The Ptarmigans are more skittish and you can spot both males and females at this elevation and time of the year.

Bouquetin in the early morning 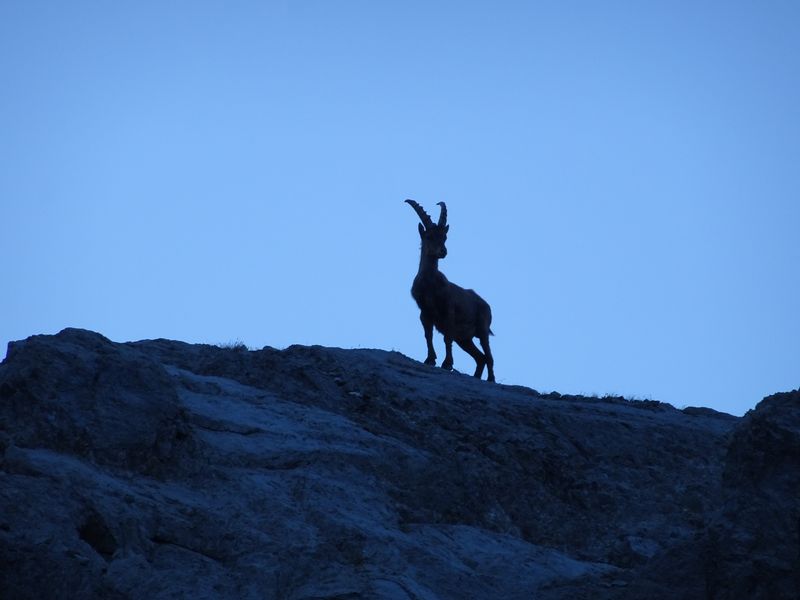 As you start hiking the couloir there is one thing that will become painfully obvious. Everybody underestimates how tough it is to climb, and it can easily add 2 hours to your estimated schedule. It is either a tough slab with no holds to grab or small sluffing rocks that feel like quick sand on an incline. You make one step forward and feel like you’re sliding two steps backward. It starts off at around 30-35 degrees then veers to the left and culminates at around 45-50 degrees in the steeper section. It is quite impressive to look down from the top and realize you have a long way to go that steep slope if you fall. 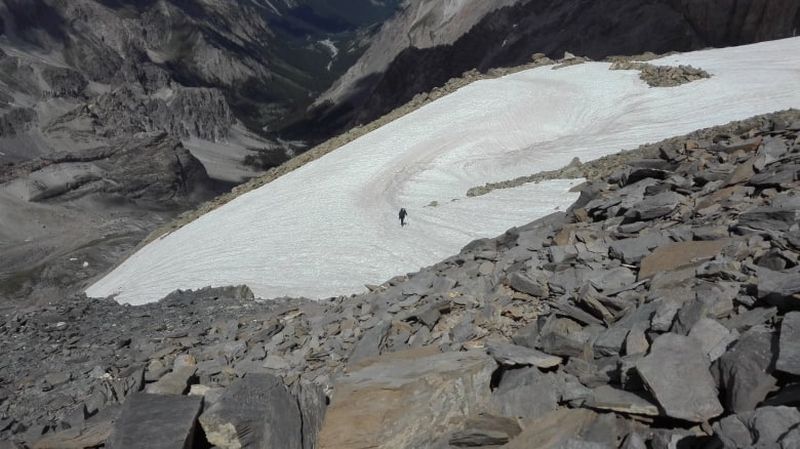 The south summit is a constant threat in the couloir. It showers the slope with rocks of various sizes especially once the sun hits the slope and the frozen cracks tend to release some material. So you have to keep an eye constantly above you to check what is going on.

The couloir is easier to climb when there is snow in it. You use crampons and climb on the frozen snow instead of fighting the sluffing rocks. It is key to choose the season and the time of the day you want to climb. Tof and I climbed it early in the summer and early in the morning. We used our crampons and climbed on the frozen snow. You have to be very careful though as the couloir is steep and falling on the frozen snow means you would slide all the way down with very little chance of self arrest all the way to the bottom where large jagged rocks will be waiting for you. So walk slowly and purposefully to make sure your crampons bite well into the snow. Wearing a helmet is recommended and the use of stocks or an ice axe very useful for balance in the couloir.

Once you pass the steep section of the couloir it opens up and you can spot the mountain rescue radio relay below the summit along with the summit itself. It is one of the most joyous sights after struggling in the couloir, but you now have to face the thinner air and still a few hundred meters to conquer. 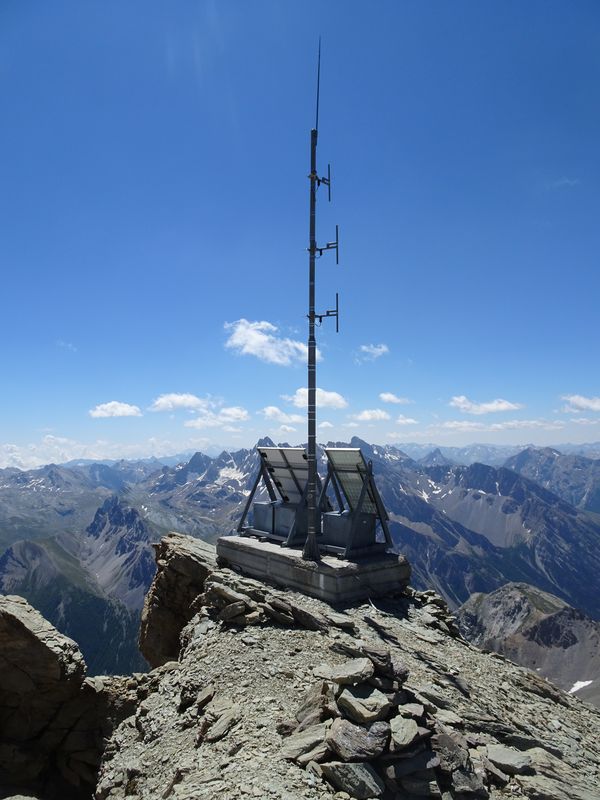 Tof and I reached the summit after much effort and were both elated and tired. We activated on 20m SSB for myself while Tof worked 30m CW. We used a dipole with a fishing pole that was rigged in the rocks at the summit. The chasers were listening and M3FEH was the first HF QSO from the summit. After a fairly quick activation and some pictures we headed back down. 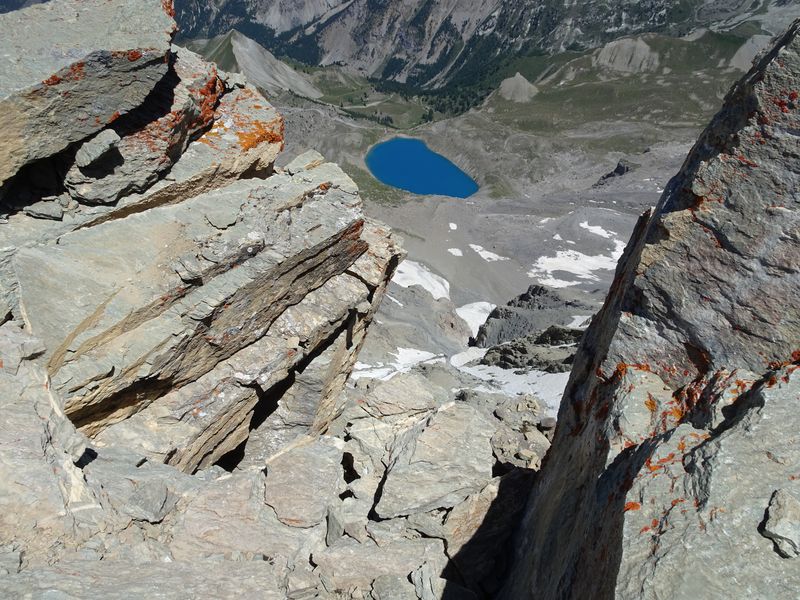 Tof on the summit with the southern summit behind: 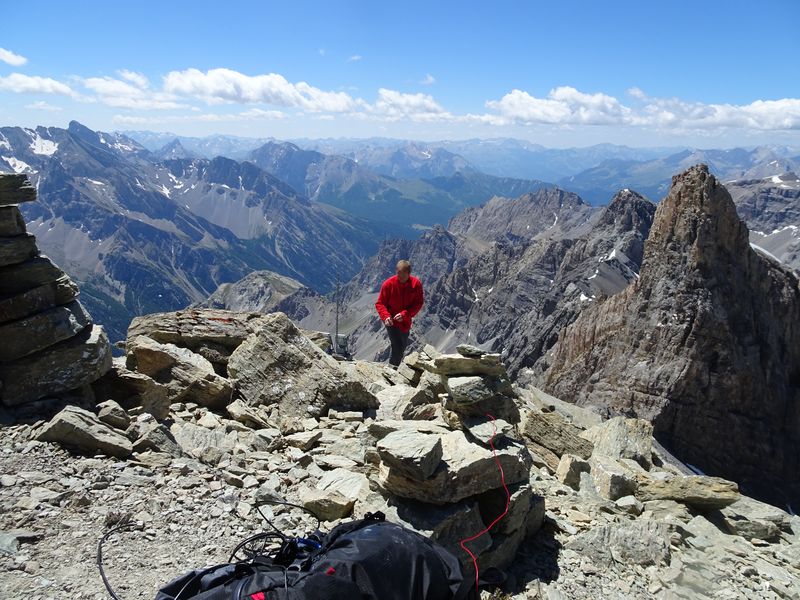 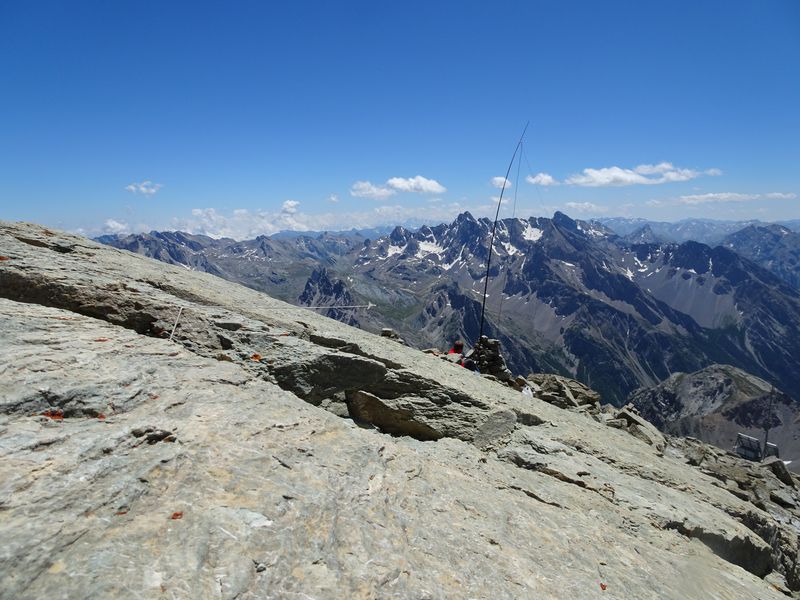 This time we had 2 options in the couloir. Either you crampon into the softer snow from the afternoon sun or you use the sluffing rocks to your advantage and ride them down as if you were skiing down the couloir. We used the second option but had to very carefully aim our trajectories so as to not release falling rocks on top of each other. We ended-up zig-zagging down the couloir one at a time in order avoid each other’s falling rocks and sluff. As we were heading down we had a bit of a scare as Tof slid onto a patch of snow. Even though the snow was softer he could not stop himself and had to hurl himself in a rocky patch face down in order to stop himself otherwise he would have been gone for a few hundred meters down the couloir. What the end-result would have been of that is anybody’s guess but his quick reaction saved the day even though his hands bore the brunt of his rapid reaction.

Tof, F5UBH/P, in the lower section of the couloir. Fallen rocks from the S summit in the snow and our starting point all the way at the back of the picture: 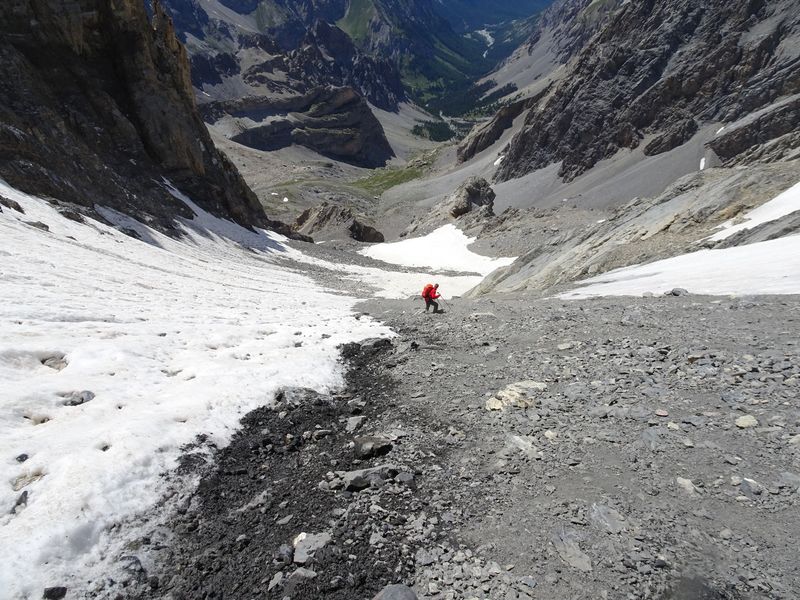 F/JG1XMV/P finishing the lower section of the couloir:

The rest of the hike down was quite uneventful thankfully with more Bouquetins. The adrenaline from getting out of the couloir was now behind us. What laid ahead of us was a neeeeeeever-ending trail back down to the car. It just felt like it would never end. My legs were shot after such a long day and the sight of the parking lot was one of the sweetest ones ever! It was quite a full day with more than 1,600m of vert and around a 25km round trip. Tof was still going strong and could have gone for quite a while still I reckon. :-). 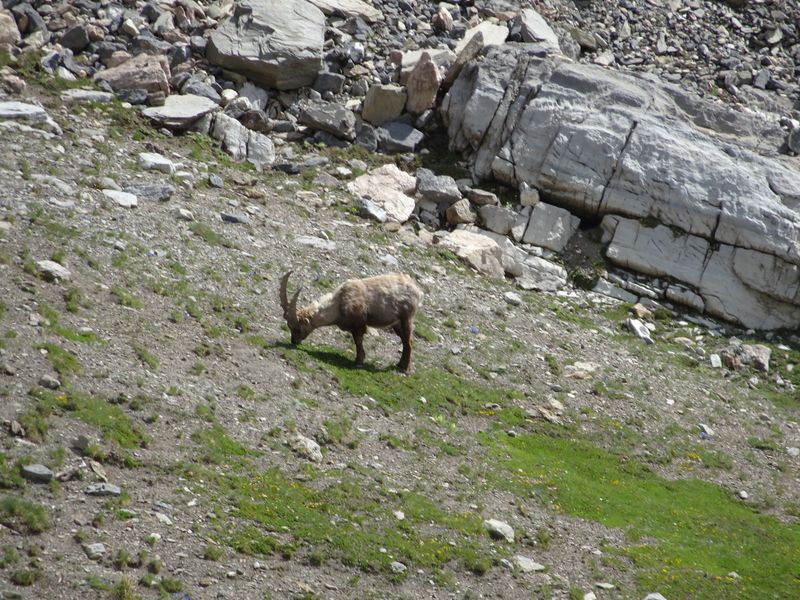 Activating this summit ended-up being a very nice experience due to the planning that had gone into it and the fact that it all paid out in the end with a “new one” activated while enjoying amazing views and a great fauna. I am glad SOTA pushed me to discover yet another summit and another area.

More adventure there than I’ve had in my whole SOTA career! Congrats on your survival

Wicked report nice one folks and to be NO-1 chaser in the log for the Virgin summit made my day. breath taking photos just captures it all not seen by many and now shared among many,

TOP level activation!
Congrats.
While reading your description of the couloir ascent, I was feeling scared and worried about descent.
When I read the story of the descent including Tof sliding on the steep snowed surface and stopping against some rocks at the side, I almost felt sick of fear.
That’s why I’ve never worn crampons and I’ll never attempt to hike such steep slopes where a small mistake can take you all the way down to death.
Fortunately, there are much braver activators than I and thanks to you and others we can have those difficult summits offered on air and enjoy beautiful pictures like the ones you shared with us in your report.
Thank you.
73,

It was a pleasure working you Karl, congrats on the first! The old faithful QRP chaser! Thanks for calling as always and thanks to all the chasers in general.

To be honest both Tof and I were not fully certain how we were going to tackle the descent. Crampons, no crampons? It is a weird feeling, making some QSOs and at the same time having to think about this in the back of your mind. Eventually we went down in the small sluffy rocks ski-style trying to avoid the snow without crampons but at one stage Tof had to walk on the snow and that’s where he lost his footing despite the fact that it had been softened by the sun. I saw him drop and start his slide and it made me sick to my stomach. He was below me and there was nothing I could do but watch in shock. I cannot tell you how relieved I was when he managed to arrest himself. His pack stayed on his back but he had lost his poles along the way. I slowly retrieved them for him but it was a bit tricky as I had to be above him to retrieve them and small moves were sending rocks down the slope towards him. He had to swat a few that were coming down his way despite my best efforts. I eventually ended-up getting his poles and throwing them down the slope to him like javelins. I got to tell you, we were elated to get out of that nasty couloir!

The funny thing is, we had called the local mountain guides bureau before the trip for some info about the summit, the access and the snow condition in the couloir. They had absolutely zero information as none of their guides had been there in ages… It should have been a hint

Anyway, we managed ok in the end but I doubt I will be back for a second serving of that specific summit!

We dont have terrain anything like that in this part of the country (SE USA). I would love to do more like that where you really feel like you are on top of the world. Ok maybe not one that requires a helmet, but still…

Oh, and I almost forgot, I have a couple of videos. Let’s see if it works:

Bouquetin in the wind…