With several countries now gaining 60 metres I wonder if there’s interest for a 60 metre activity session - say a window of 4 hours or so on a weekend day?

POLL: Please chose up to 6 options below

Overlap frequency (s?) between the the UK blocks and the WRC15 allocation. (are there other European countries with different block locations?).

As far as I know, the following European countries are still channelised outside the WRC15 allocation: Finland, Ireland, Portugal, Greece, Czech Rep., Sweden, but my table may be out of date.

For distances of up to a few hundred km, late morning to late afternoon is fairly reliable except perhaps in mid summer. For transatlantic contacts after 0200 is best.

Best not bother, it is unenforcable and some rigs don’t have the ability to drop the power.

This is a good idea and I look forward to taking part!

As far as I know, the following European countries are still channelised outside the WRC15 allocation: Finland, Ireland, Portugal, Greece, Czech Rep., Sweden, but my table may be out of date.

Hi Brian - of that list Ireland just got the WRC allocation IN ADDITION to the blocks or channels that they already had.

I guess I’m going to have to do some overlaying of charts to see if there are ANY common frequencies across all European countries that have 60 metres. I’ve found at least one frequency that works between WRC15 and the UK blocks, but we might end up having to work - “cross-blocks” to get the other countries in.

I’m thinking of perhaps January sometime, so I take your advice on late morning to late afternoon (I’m thinking more Inter-Europe contacts rather than transatlantic, at least to start with).

So Perhaps 1100 UTC to 1500 UTC ?? i.e. activators try to be on at some point within this window. They can of couse start earlier and/or finish later however at this time of year I’m guessing a 30 minute - 1 hour activation is most likley in the cold.

Sounds good to me, Ed.

I have been looking at my past chases and find that the band is fairly reliable during the day at distances up to about 400 miles, about 650 km, even on days when 80 m is dead and 40m is long, which is why the 60m enthusiasts regard the band as near ideal for SOTA. As 60m allocations spread (and, I hope, increase) I forsee 60m eventually becoming more important than either 40m or 80m for daytime use. As it is, 60m provided 30% of my chaser points during 2016.

OK, we have had 11 people vote and a fair flow across the points so far. The majority are OK with either Saturday or Sunday and there are just 2 people who can only do one or the other (so I’ll upset just one person whichever I chose).

But… for the sake of planning - if no one brings up a reason why this won’t be a good idea, I’ve decided on January 29th. 2017 1100 - 1500 UTC to be the target time for the 60m SOTA activity. I have just trimmed my extended linked dipole for 60 metres and my FT817ND is programmed to do the WRC15 transmit range. I also have an HF20A end-fed that appears to cover 60m fine. So I am ready but I want to give others time to get ready. We also need to work out commen frequencies or how to get cross frequency allocation contacts.

If there are no big objections to the date, I’ll also put out some publicity through the web and podcasts.

Ed.
These are the results to the Poll at the time of posting this reply: 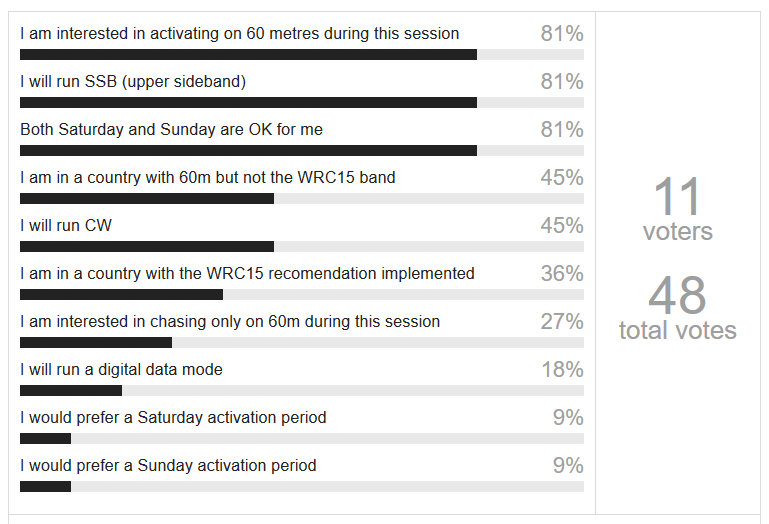 Here are the current details of 60 metre allocations in Region 1: 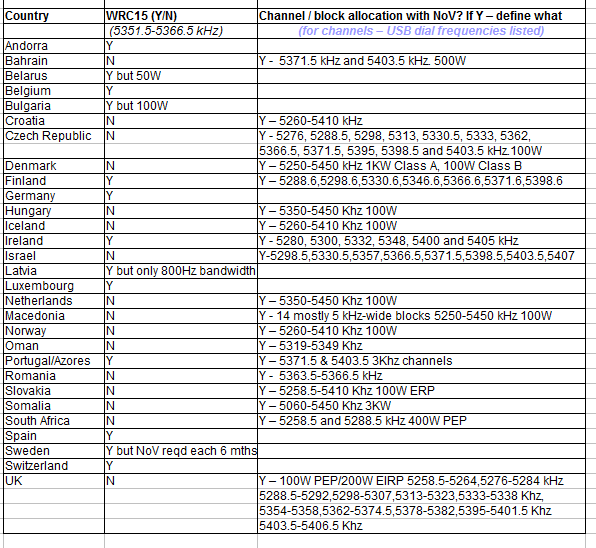 Shown graphically this is:

So there are a lot of overlaps - and we should be able to find frequencies with in the WRC band where it is legal for the other countries to transmit with the exception of Oman and Bahrain.

To be complete, here’s the WRC15 bandplan

IARU region 1 countries that definitely DO NOT have an overlap are:
Oman, Bahrain.

Therefore I would recomend those

Or use splits perhaps and announce where you are listening?

I know its “teaching your Grandmother to suck eggs” but in the UK we should not use 5357 for SSB as the USB will be out of band for us. I only mention this basic fact because I have heard a couple of instances recently where the operators seem to have forgotten this!

Yes indeed - now where did I put the manual!

It’s the first or second row of 817 options ISTR.

I know its “teaching your Grandmother to suck eggs” but in the UK we should not use 5357 for SSB as the USB will be out of band for us.

Also, 5357 to 5359 is heavily occupied by JT65 traffic from all over Europe. SSB is most definitely unwelcome in this portion of the band, regardless of what the various bandplans might say.

It’s the first or second row of 817 options ISTR.

I know its “teaching your Grandmother to suck eggs” but in the UK we should not use 5357 for SSB as the USB will be out of band for us.

Hi Brian,
Initially I had “G” against that third frequency as well, but then realised that with USB and 2.7KHz bandwidth - as you say, it would be out of band - the revised version (created well before your response) does not have G against the 5357 KHz frequency,
Only Israel <-> WRC15 countries should use this frequency. I don’t know if we have any chasers in Israel - so this could be a moot point.

Hi Andy,
As stated earlier working cross frequencies could be an option however given that the vast majority of IARU region 1 countries that now have 60 metres have the WRC15 coverage - either the standard 15KHz one or as part of their wider range. Most people may not be interest in the complexity of cross frequency working - especially when there are two spot frequencies where contact with the UK is possible and one each for Romania and the Czech Repubic, within the WRC frequency band.

JT65 and other narrow data modes have THEIR OWN - EXCLUSIVE! frequency range 5366 - 5366.5 KHz within the IARU bandplan which is being advised to be followed by all contries who have adopted the WRC15 agreement on 60m. It’s true the rest of the WRC15 band from 5354 - 5366 is also “All Mode” however having a dedicated part of the band plan for themselves, I would hope the JT65 operators would at least try to used their allocated frequency band first before looking elsewhere. Really it should be 5366-5366.5 First, 5351 - 5354 (CW & Digital band) and then the general purpose area.

Of course with countries who had their 60m allocation prior to WRC15, they may have chosen other frequencies already, hence it will be difficult for sometime for all of this to settle down into some kind of standard.

In my case, if free I will first try these three frequencies during my 60m activation. If they are all in use, I will seek out another frequency between 5354 and 5364 but this will of course restrict me to communications with only those other 12 countries that have the WRC frequencies within their allocation.

It will be interesting afterwards to see what frequencies were used and which countries took part.

After all this is an experiment.

I’m glad I didn’t suggest this coming weekend as temperatures down to -24°C are now forecast here!!

that now have 60 metres have the WRC15 coverage

And you are trying to arrange an activity session and fit it into 15kHz? Spread it out man or you’ll have people on top of people and non-SOTA users of that chunk of spectrum will love us muchly!

All are free to transmit on which ever frequencies they are allowed to.

13 countries have the WRC frequencies - of those seven ONLY have the 15KHz (Germany included). 6 countries have WRC15 plus other bands or channels.
For activators in the 7 WRC15 only, countries we have no choice - we can only transmit in that 15KHz frequency range.

I guess you are saying that there will be too much non-SOTA QRM for this activity to work - you could be right - but we’ll only find that out by trying.

I realise the effectively two “overlap” frequencies will be very hard to get onto without QRM. If these are blocked, the activity may be effectively restricted to the 13 countries with the WRC15 frequencies, except for those willing to operate split frequency. I guess in that case the frequency being listened on by the activator would have to be published in the text of a spot on SOTAWatch?

JT65 and other narrow data modes have THEIR OWN - EXCLUSIVE! frequency range 5366 - 5366.5 KHz within the IARU bandplan

How ridiculous! Bearing in mind that a single JT65A signal needs a bandwidth of 177.6 Hz, you could only fit two JT65A signals into that space without overlap.

There is a long-standing world-wide convention that JT65A (and JT9) should operate between 5356 and 5359 kHz, subject of course to licensing limitations in individual countries. This has been normal usage and practice for many years. That is why I said “regardless of what various bandplans might say”.

Mer Culpa! I thought JT65 was a really narrow mode - if its over 20Hz wide it isn’t allowed in the 5366-5366.5 range - but OK in the 5351.5 - 5354 segment - Those who use it in the very busy all-mode section are not breaking any law but they would be better regarded if they used the frequencies that the phone operators are not allowed in, or expect to have to fight for the frequency (where both parties will lose out). Now all of this is especially applicable to countries who only have the WRC 15 band. By the way a bandplan is not “just a bandplan” - in some countries, like the US and indeed Germany, the bandplan is the law. It’s not a matter of choice. The IARU Region 1 Bandplan is part of German Law, and not following it, is an offence.

A useful reference for those in the UK:
http://rsgb.org/main/operating/band-plans/hf/5mhz/

Having had the last week at -10°C or cooler temperatures (today was -17°C), I am hoping the forecast rise in temperatures here will come next week before the 29th. If not, access to my chosen summit will not be possible.

The good news is that SunSport Cycle 25 has now officially started, with the first reverse polarity sun spot being reported on the Spaceweather sites. There’s still a long time before the next maximum but at least it’s coming now! 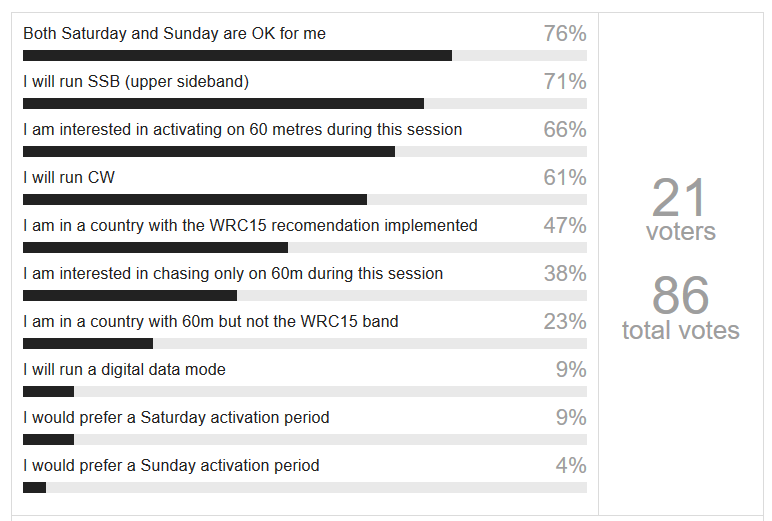