I have both the ax2 and the mfj1820t. I was doing some testing at home. With my 817 and the supplied ax2 counterpoise results were the following

Did I get a Lemon ax2 or is the mfj a better match normally?

Hi AJ -
I think you are lucky. The best I could do with TWO different MFJ-1820 was about 3:1, no matter what I tried for counterpoise. I gave up.
Etienne-K7ATN

It’s very unlikely you got a bad whip. These things are very dependent on the dress and length of the counterpoise system as well as what it is connected to. Yaesu sold a whip for use with the FT817 but I don’t recall any glowing DX reports from users. The AX2 is intended for use on 20 m with the KX2 iirc. Adjustment of the counterpoise for a better swr is usually recommended in the instructions.

SWR isn’t everything. Contacts are what you want.

You should try an elevated 16.5 ft counterpoise - as high as you can get it.

Then the whip can be adjusted for minimum SWR. It works like an ATU but with some radiation. Hopefully this gives you a better match.

If it doesn’t work try a second 16.5 ft wire instead of the whip.

Having the counterpoise on the ground is a lossy arrangement. Yes I know it’s often used because we are in a hurry and it’s easier.

Will need to do some further testing to see if there is any signal difference between the two, based on what you’re saying I’m guessing there won’t be much difference, if any.

Add a second radial, spaced at 180 degrees from the first, the radiation from the radials cancels out if the balance is perfect, but the radiation from the vertical is then dominant. this is the original design of the quarter wave with ground plane. Best if the radials are above ground and never connected to ground, especially at the ends. Connect to ground from the “earth” side of the feedpoint if you wish to bleed off static.

With the 817, I either mounted the whip to a tripod or directly on the radio’s BNC port. Directly connected to the radio, I used a single 13’ counterpoise wire laid on the ground. When tripod-mounted, I had 4 13’ counterpoise wires arranged around the tripod (my QRZ profile pic is me using th is arrangement on w4v/hb-002). I adjusted SWR by shortening the whip a few inches until I got SWR below 1.5. It always worked. I made contacts, including DX (from Virginia).

With the KX2, I just connect the whip and single counterpoise to the radio, handheld, and hit the ATU button. Always matches to 1.2:1 or better and works great. I also have and use the 15m version and have borrowed my buddy’s 10m version.

I have the AX2 as well. It works just like the MFJ-1820t, but is smaller. My buddy has used my AX2 on his 818 (manually adjusted since there is no tuner).

I’d say if you can’t get better than 2:1, even manually tuned with a single counterpoise wire, you have a bad antenna. I’ve had a couple quality control problems with my AX2 and am waiting on my 2nd replacement, so I wouldn’t discount that as the issue.

I have both the ax2 and the mfj1820t. With my 817 and the supplied ax2 counterpoise results were the following
…
Did I get a Lemon ax2 or is the mfj a better match normally?

Therefore, the bare specification of an SWR value is far too little meaningful.
If your SWR values are only based on the SWR indicator of the FT817, the following should also be considered:

Because I am an “Elecrafter” myself, I would like to ask you to read the Elecraft AX2 Owners Manual (again). There you will find e.g. also this not to be ignored information:

Elecraft AX2 Owners Manual (extract):
The Elecraft AX2 is a miniature 20 meter telescoping whip that disassembles into a 6” (15 cm) whip and 2.5” (6 cm) base unit.
It is intended to be used with an ATU (antenna tuner).

Note: A measuring device with a graphic display and/or display of the complex antenna impedance (real and imaginary part) is highly recommended for the initial resonance adjustment of the configuration usually used.

Most ground is just a distributed resistor. The ground on summits is mostly rocks, which are pretty good insulators.

It depends on what the rock is, some rock types are surprisingly low in resistance.

Thanks Chris, I have some more testing to do. One of the things I’ve learned is, and this sounds so simple, is try to do the best you can from home first, before you’re on the mountain!

Why would they admit that a tuner is required? Doesn’t that mean the antenna isn’t efficient? (We know it’s not, but I think you know what I’m saying) I always learned that the goal should be to NOT use a tuner if possible, which meant your antenna was resonant. Why does my MFJ 1820 get a good swr without the need for a tuner?

Why does my MFJ 1820 get a good swr without the need for a tuner?

My dummy load has a 1:1 SWR from DC to 1.5GHz. It’s a rubbish antenna though! Good SWR is not an indication the antenna is a good radiator.

Remember: SWR is not a measure of efficiency.

Why would they admit that a tuner is required? Doesn’t that mean the antenna isn’t efficient? (We know it’s not, but I think you know what I’m saying)

Unfortunately, this does not answer the question about the SWR indicator used.

Why would they admit that a tuner is required? Doesn’t that mean the antenna isn’t efficient? (We know it’s not, but I think you know what I’m saying) I always learned that the goal should be to NOT use a tuner if possible, which meant your antenna was resonant. Why does my MFJ 1820 get a good swr without the need for a tuner?

If you want to learn more about the efficiency of the AX2 you could enter your product rating on ﻿https://elecraft-kx.groups.io/g/main

The developer, Wayne@N6KR, will surely have something new to tell you about this.

You should try an elevated 16.5 ft counterpoise - as high as you can get it.

If you have to go to all that trouble, why not forget the little whip antenna and that counterpoise and instead put up an inverted v halfwave dipole?

Karl (OE6LKG) has bought an AX2 and we have been trying it out on a few activations. On Sunday we were on the Schwarzkogel OE/ST-356: 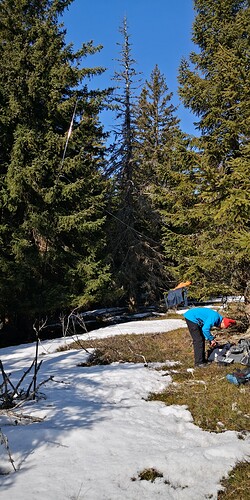 As you can see, we raise it up about 3.5m on a cheap pole from Sotabeams. This allows the radial to be run over tree branches, keeping it over 2m off the ground: 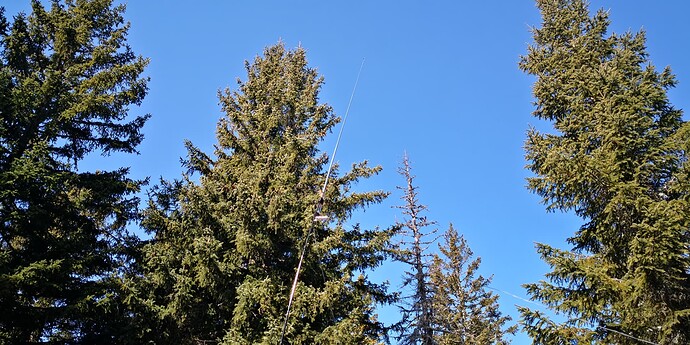 It definitely works better up high, but as people above have commented: you might well ask yourself why bother?

Well the counterpoise is half a dipole and replacing the loaded whip with a wire does as you suggest. Cheaper. Possibly lighter. Louder.

But you don’t do as well in the miles per foot of whip ratings.

In VK if a rock is somewhat conductive it’s probably an ore and if not being mined it is in a registered mining lease.

Marble was used for switch boards and apparatus insulators. I’ve seen both but they were no longer state of the art by 1960.

In parts of Western Australia you can pick up any two random rocks and weld them together.

For SOTA ops whether the ground is conductive or not depends on which is worse for my set up.

Why on earth do SOTA antenna experts struggle so much to understand that ultraportable/lightweight whip antennas have their place, even if it’s just for fun?

For example, why not just take note of the intended use given by Elecraft in the AX2 Owner’s Manual: pedestrian mobile, “stealth” operation, or whenever dipoles, verticals, long wires, and other full-size antennas cannot be erected?

BTW, maybe some will have a chance to contact the two AX1/AX2 enthusiasts HB9NBG and HB9FZC currently touring in the Swiss mountains.

even if it’s just for fun

I did considering purchasing one of these (for fun), however at roughly £160 including the 40m coil, I can think of cheaper ways of having fun!