Apart from a miserable wet and windy February, the weather in EI since the start of the year has been fairly benign, allowing some good opportunities to activate summits in the EI/IW and EI/IS regions. Since my last activation report in January on Nephin, EI/IW-002, I’ve managed to activate seven Irish summits, all on 20m SSB: Seefin Mountain EI/IS-052, Knocknaskagh EI/IS-068, Benbaun EI/IW-006, Temple Hill EI/IS-013, Cush EI/IS-038, Birreencorragh EI/IW-012 and Croagh Patrick EI/IW-005.

I experienced quite the range of conditions during these activations - dense fog on Birreencorragh EI/IW-012, ice cold winds on Temple Hill EI/IS-013, almost balmy conditions on Cush EI/IS-013. Often, I had the mountain to myself, whereas hiking up Croagh Patrick EI/IW-005 on Easter Monday was like walking down O’Connell Street in Dublin! 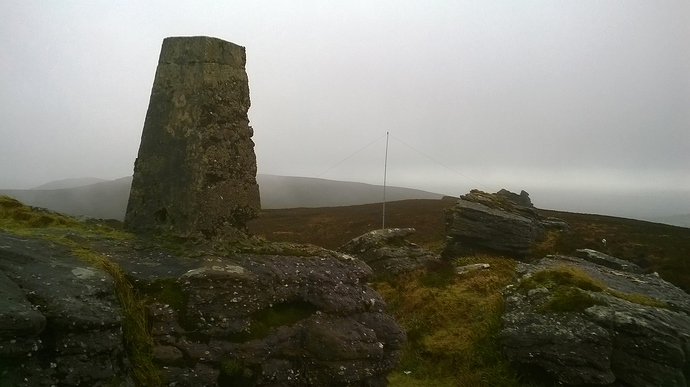 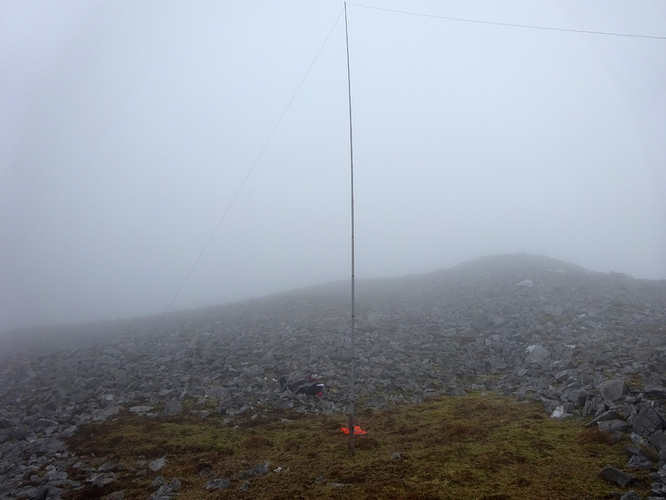 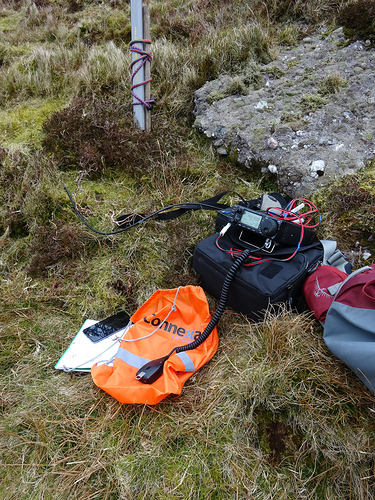 However, the most memorable of these activations was definitely Benbaun EI/IW-005. A fantastic sunny winter’s morning made perfect conditions for a first time activation of County Galway’s highest summit. Benbaun is the remotest of the 12 Bens mountain range and this probably explains why is has not been activated before – it is off the main horseshoe route to the south (which offers a 34 point tally if you’re very fit), or as I found out last year it is the summit just too far on the end of a linear western route which also includes Bencullagh EI/IW-023 and Muckanaght EI/IW-021.

From my research, direct access to Benbaun is best achieved from the R344 road to the north east where there is a tiny lay-by with barely enough parking for one car. From here there is a steep hike up to the summit of Knockpasheemore Hill (412m) before Benbaun itself first comes into view. Then it’s a 2.5km trudge across the ridge to the base of Benbaun itself. On this particular morning the views were simply stunning. From Knockpasheemore looking north, the summits of Mweelrea EI/IW-001, Ben Lugmore EI/IW-003 and Barrclashcame EI/IW-004 looked like a snow-topped wall. To the south-east, Lough Inagh glistened in the sun. The frosty conditions gave the additional benefit of stiffening up the boggy ridge, making the going easier. Snow covered Benbaun (‘white mountain’ in Gaelic) lived up to its name on this morning. Once the snow line was reached and the gradient increased, the going became more difficult as the snow was hard packed and frozen on top. Crampons would have been very useful. Following the foot holes of the most recent walker proved to be the most reliable way of ensuring good grip, particularly on the final stretch. 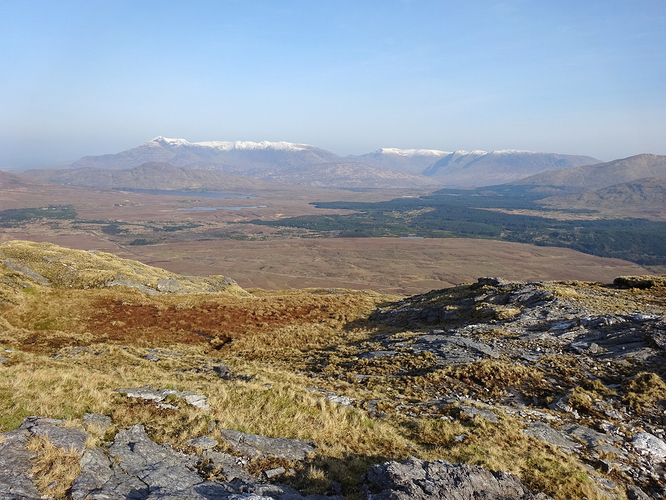 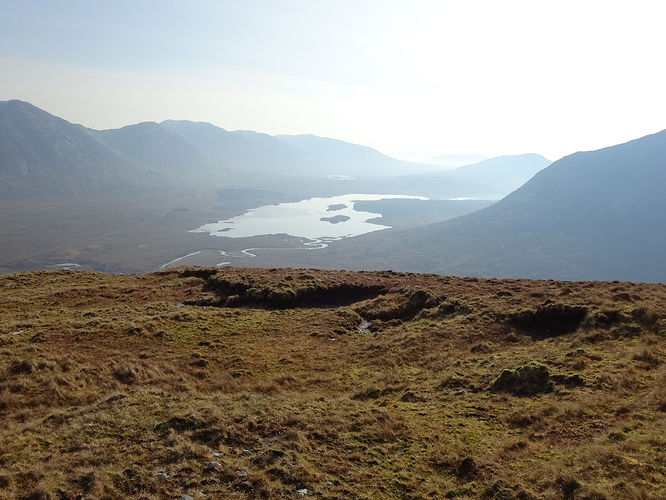 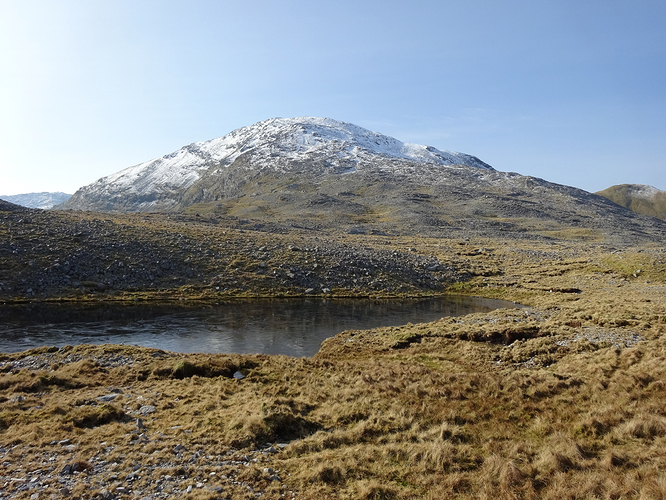 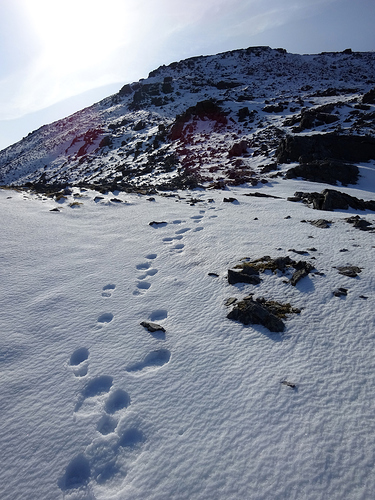 Nearing the Summit of Benbaun

The summit cairn was full of snow but still the provided the best shelter for the activation. Once set up, a quick self-spot and the activation was soon confirmed on 20m with 16 qso’s in total – my thanks to all who contacted me. A couple of hikers appeared as I was packing up – I chatted with them for a few minutes and tried to explain what I was doing, before descending again. 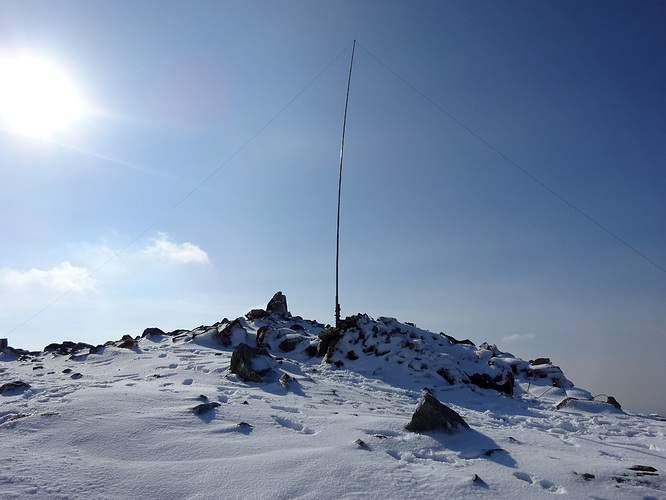 As is often the case, the descent proved to be trickier than the ascent. Once clear of the snow, the thaw which had taken hold further down now made the going very boggy indeed. The final descent to the car was very slippery and I took a couple of minor falls which reminded me of the first priority of the day, which is to get safely back to the car. Summit and back took about 5 hours - a great day’s walking indeed.

And so we reach the end of the winter bonus incentive for this winter. At least we can now look forward to warmer days, longer activations… and the return of the midge.

Great photos John, and a really interesting read about activating in an association we don’t tend to hear too much about. I’ll be activating in GI at the end of May / beginning of June, and may squeeze a relatively nearby EI summit in on the trip too.

Thanks for your comments. Hope you get a chance to activate in EI when you are over in May/June. There are only a handful of regular EI activators at present. I had an article published in the IRTS Journal, Echo Ireland at the end of last year extolling the virtues of SOTA but I haven’t seen an uptick in activity yet…

Thanks for your kind words. I see from your posts that you have been very active throughout the winter yourself. Best of luck with the CT SOTA event…

Congratulations, John, you managed some really challenging IW summits! Beautiful and remote it is.
I enjoyed reading about your SOTA experience and thanks for the great photo’s.
73, Phil ON4TA

My pleasure, Peter. Thanks to you and Sylvia for the double s2s. Thanks also to Manuel EA2DT for co-ordinating that one out of the pile-up!