We’re off to Lanzarote next week, and no doubt grabbing any SOTAing opportunities that we can slip in.

Latest advice from Jet2 is that all our gear (which I itemised to them in an email) is fine to travel, except for the Tracer 16Ah LifePO4 pack (as I anticipated). So Jimmy’s 817 will be powered from rechargeable 2400mAH NiMH AA batteries in the battery tray, while mine will have the FNB85 1400mAH NiMH pack installed. Jet2 say that all rechargeable batteries must travel in the cabin, and if the batteries are installed in the device, then the device must travel in the cabin too. So we are going to have all out batteries installed in the 817s and take them in the cabin. Pre-tuned to BBC Radio 2 89.3MHz and with rubber duck antennas at the ready. If security requires that we remove the batteries, then we can do that quickly and easily but I wouldn’t anticipate that. I’ve taken VHF handhelds through security many times now and never been required to disconnect the battery.

In the hold baggage will be the travel mast, the MFD, extension coax, walking poles, guying kit and 20m groundplane antenna.

We’re staying near Puerto del Carmen. It’s only days to go and I haven’t even looked at potential summits to activate yet. I anticipate Jimmy already has several nominations in mind, but I will be looking at the archives on here to see what our SOTA friends who’ve been to Lanzarote have to say too.

In the meantime, I have been charging up the FNB85 for the first time, and will try to use it tomorrow morning for the DX event.

A visit to the local poundshop ( 1.15 euroshop? ) whilst there to buy a pack of disposable AA cells maybe worthwhile.

Why? We’ve got our preferred battery options, and the written approval/permission to carry them by the airline.

A trip to the local “supermercado de basura” for a blister pack of 10 AA batteries will cost a euro or two when you get there. Should you have a difficult activation(s) due to poor conditions and both of you are calling for some time, it’s possible you may end up with both battery packs flat and still short of a contact or two. The prepared activator can pop the disposable AA’s into the tray and you’ll get another 30mins operating.

You may find the endurance of the FNB-85 a little lacking. Certainly the predecessor, the FNB-72 doesn’t have much oomph.

If you don’t use them then you have merely exchanged a euro or two for extra peace of mind.

Now that you’ve said this Andy, it is a racing certainty (topical) that Jimmy will do exactly as you suggest.

Using AAs in the battery holder of the FT-817 doesn’t work very well on TX, the internal resistance is too high and at 5W output the radio shuts down quickly even with fresh batteries. 2.5W or even 1W will work for some time, but certainly much less than a pack of rechargeables. I was pretty happy with generic supermarket pre-charged NiMh rechargeables, picked them up for about 5 EUR / 8-pack in Lidl.

We have just arrived in Lanzarote and it is not “a bit cauld” at all. It is very hot and sunny with blue sky and no wind. We all packed our winter gear after what you said about it being “a bit cauld” and we now know we did not need to pack any winter gear at all.

You’d be OK if you were activating Teide.

Good you got there. Yes xyl said it was not too bad during the day but it was too cold to sit out in the evening and it was windy nearly the whole time they were there, something they weren’t expecting.
They were gutted not being about to sit by the private pool with their cocktails - my heart bleeds for them

Perhaps they were just unlucky with the weather but at least you are prepared!

Have a nice time.

Thank you for letting me know this. I did get colder in the evening, but was it was more mild than cold and wasn’t windy either. Looks like your XYL was unlucky with the weather in Lanzarote.

You’d be OK if you were activating Teide.

They would need their Speedos or a boat for access

That appears to be in your mind and no-one else’s Andy. Still, whatever floats your boat.

The temperature here in Tewkesbury today is 25 deg C.

The temperature here in Tewkesbury today is 25 deg

“Light of the sun, let me look upon you no more after today!” (Oedipus Tyranus if anyone cares!) 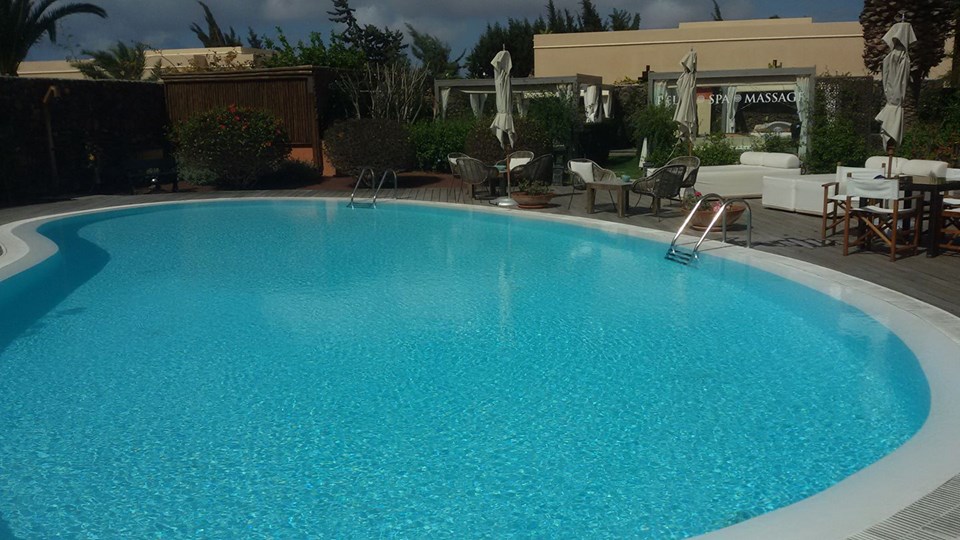 First activation of our Lanzarote holiday this morning. Noting that it was previously unactivated, I was a little concerned as to the narrowness of the crater rim. As it happened, it was fine; at its worst, there was still a metre of flattish ground either side of me. The initial lower flanks, and the summit area were much wider. Only the first 20 minutes or so required headtorch. 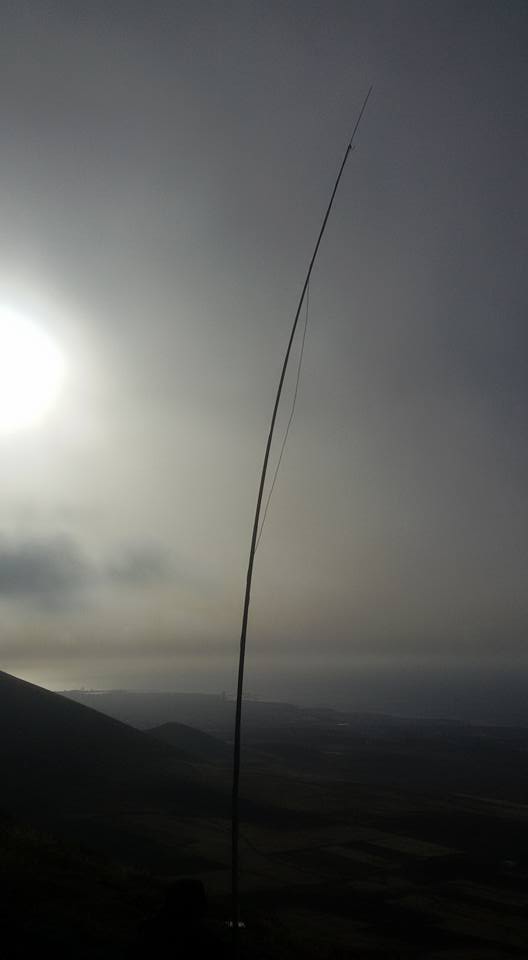 The summit itself had a different problem - wind. Far too much of it to expect my GP antenna or Jimmy’s MFD to remain intact. Finding a sheltered spot that was not on steep dangerous ground was tricky. 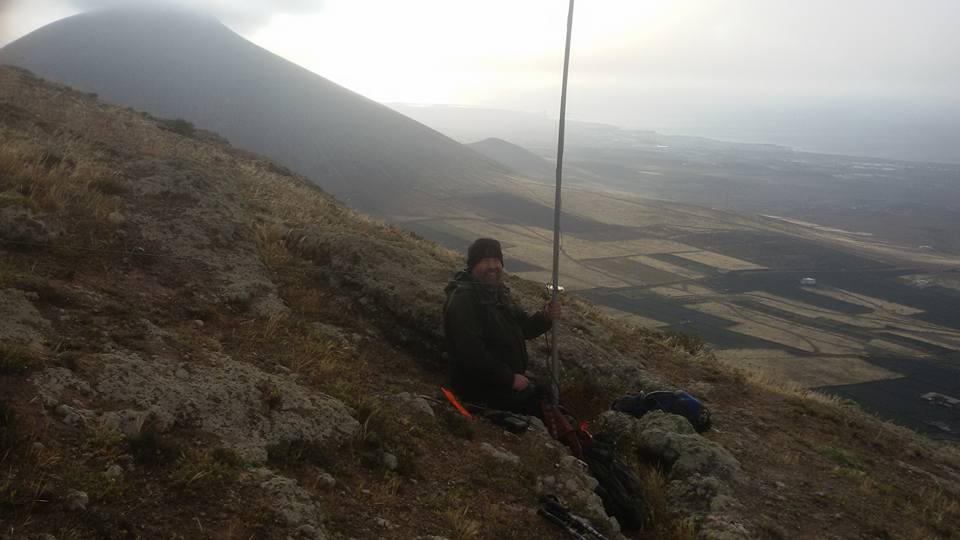 We did find a spot that we could nestle into, just a few metres south of the summit cairn. But as this was only about 3m lower than the summit, it meant that the mast would be back in the firing line of the northerly. 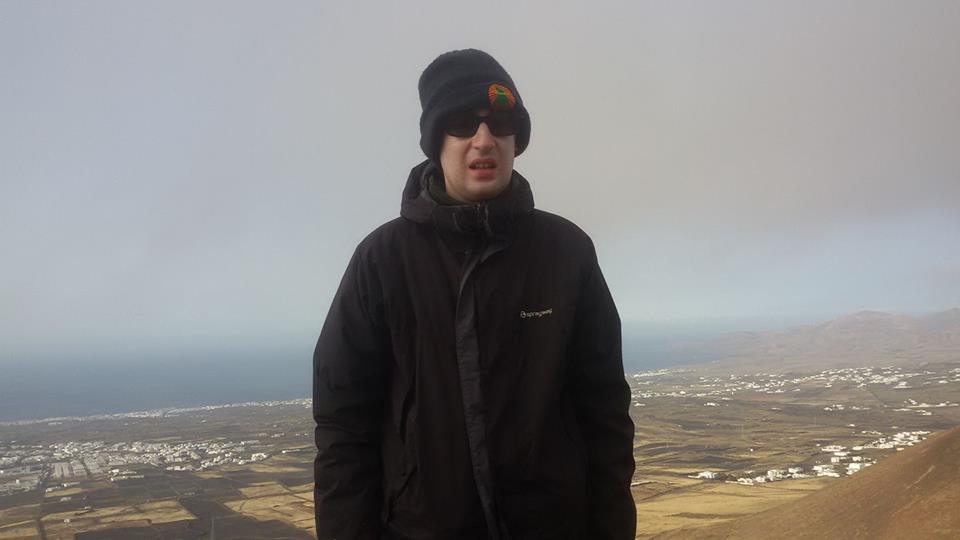 I investigated what might be possible with the handheld first. We both worked Jerry EA8/G4CAZ, and I managed to connect into the SOTA-LINK room 44050, surprisingly via ED8YAL repeater on Gran Canaria, with my handheld. We were going to need to set up HF though. 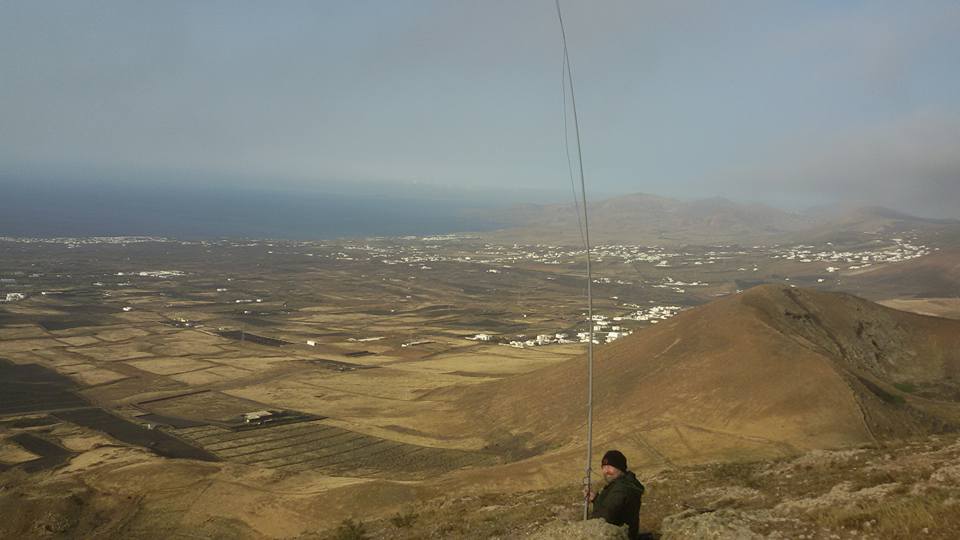 Anyway, 20m was working just fine, and we both qualified easily enough on CW and SSB respectively.

The descent was pleasant with sunlight and lack of earlier mist allowing for great views to the sea, neighbouring SOTA summits, deep down into the vast volcano cauldron, neighbouring volcanos and vineyards. We were back out our hotel in time for breakfast!

No gurning selfie? Must have been extreme up there.