I will edit this report later, but just a brief note to remark something important for CHASERS:

Jorge started his activatioin on 5.354,5 MHz and after logging 4 qso, he announced Operator change and kindly passed me his CW iambic, so that I could algo log on 5 MHz with his rig.

I see that my Spot in sotawatch wasn’t updated until 09:19, long time after Jorge had substituted me…

Make sure you don’t log me instead of EA2LU, who was activating earlier than the spot!

Well done Ignacio on your 122 QSO Marathon today! I was one who worked Jorge EA2LU, that was at 09:07 on 5 MHz CW. Thank you also to Jorge for livening up the SOTA activity earlier than most today.

Hello,
as promised, a brief report of this activation, done on December 26th 2018.

Jorge EA2LU and I decided to go out for a Christmas activation.
Weather has been warmer than usual in December. Nevertheless, when I woke up at 6:00 utc I found a rather dense fog in my hometown Pamplona. This is a view to the street from my balcony when leaving home: 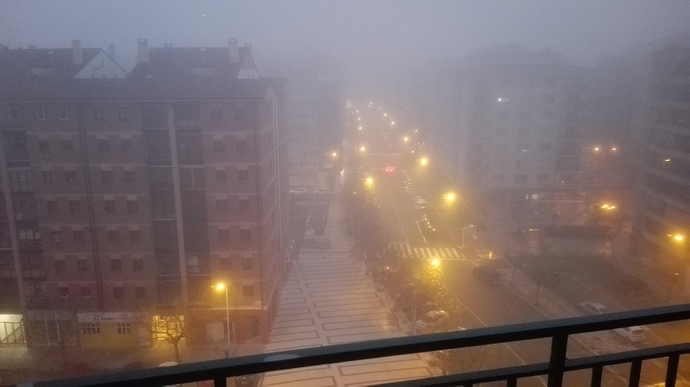 This weather discouraged to get on with the plan, but when we arrived in the summit we were very glad to see that the dense fog was only down the valley, and we understood why Pamplona was so covered under these clouds: 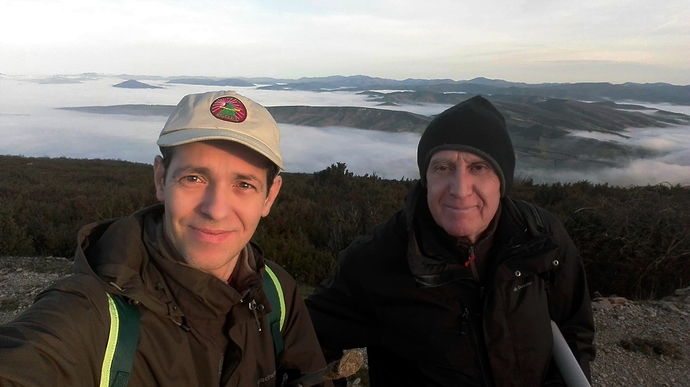 Looking around we saw the neighbour SOTA Elomendi, EA2/ NV-037 emerging over the clouds in front of us: 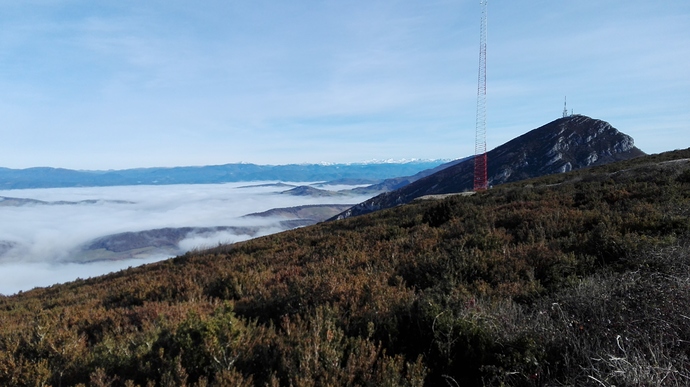 And further apart, the Pyrenees in the background with light snow on their summits: 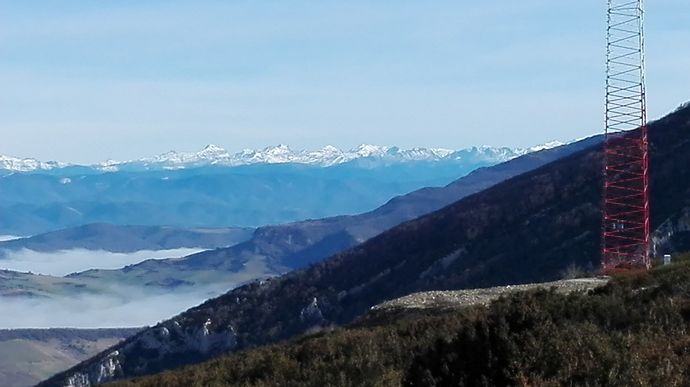 Jorge had decided to try activating on 5 MHz first, as he had never done before from a summit. To do so, he prepared a length of cable to add (8,7 m long) to his standard multiband EFHW antenna, which is ready for 40-30-20-18-15 meters. He added a crocodrile clip to quickly connect that extension cable to the end of the EFHW. 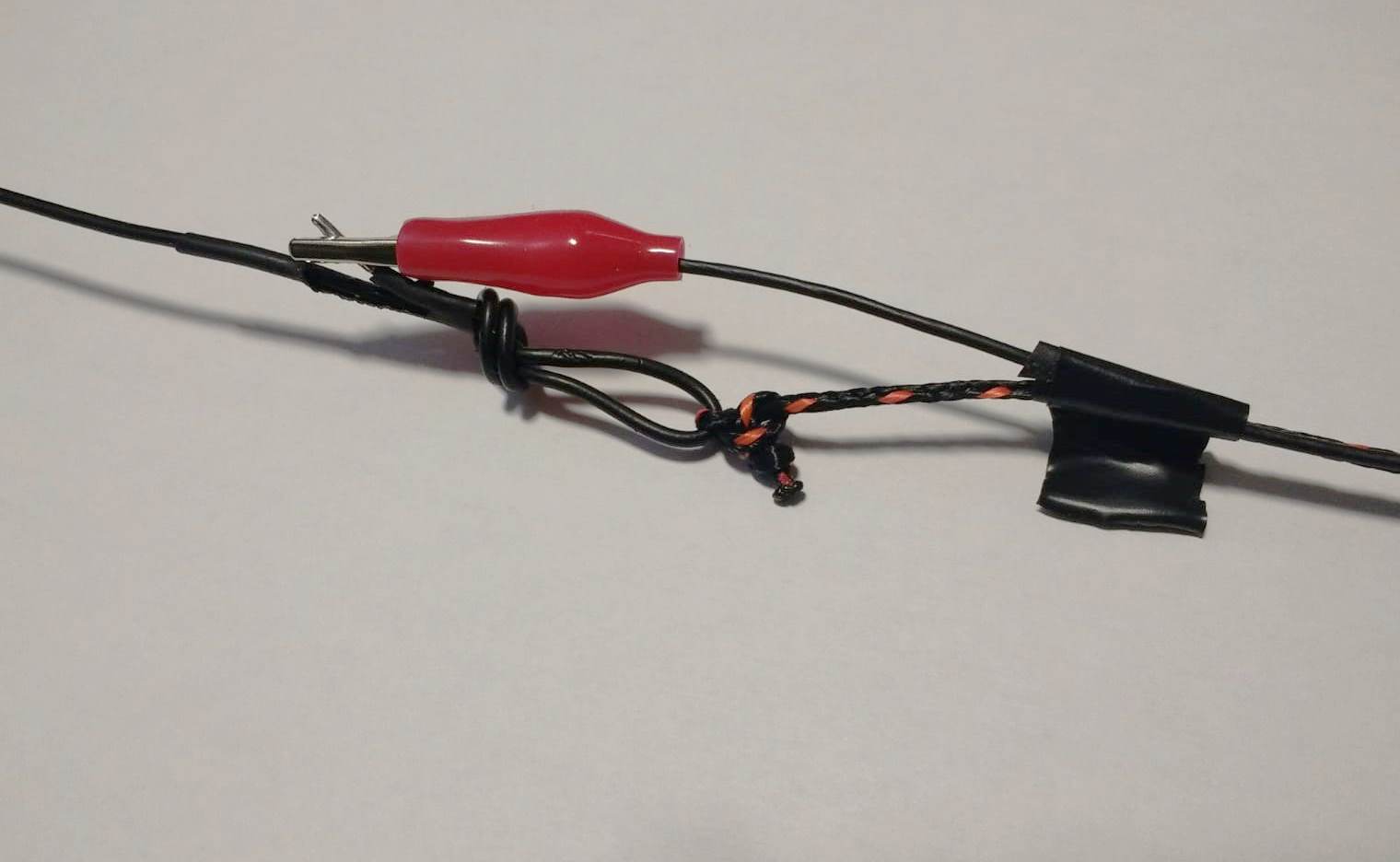 Once in the summit, we prepared his setup and clip the cable. When he switched the KX2 rig on, the band was silent.
We were happy to see that the SWR was an acceptable level of 1:5 or 2 and therefore, without any extra adjustment, Jorge proceeded to start the activation.
Soon after his first calls in CW he logged 5 stations in a row.

With a smile on his face he announced Op change and to my surprise he gave me the key to allow me calling in 60 meters CW as well.

I started cqing and soon logged 6 stations. We both had qualified in 60 meters.

Then I gave the key back to Jorge and while he continued, I separated from him to install my station.

When the activation was over, Jorge explained me why he had let me calling on 60M.

– look Ignacio, today this is the first succesful SOTA activation in 60 meter band from EA entity! That’s why I wanted you to participate with me…

Thanks Jorge for your kindness.

Most of my activation time today was spent on 7 MHz SSB. I usually avoid to activate this mode because when running on 40 m in Sunday you soon are blocked with a enormous Pile up of EA avid chasers who scan the band up and down to spot EA activators on diverse local awards…

Okay, this time I decided to give 40 SSB an oportunity to celebrate and wish merry Christmas everybody.

I logged 111 qso in 40m running there for 44 minutes. That was a bit of stressful but enjoyable as well. At moments I had peaks of 5 qso per minute, tough contest style, you see!.
This circumstance lead to few chances to listen to usual chasers from abroad…

Later I noticed that my 122 qso is my personal record for higher number of qso from a summit. So far…

I hope to have another opportunity to activate before end of the year.

See you soon from another summit.
73 MX & HNY