The Doric language of North-East Scotland has a great word for the weather we faced as we arrived to start this activation. Dreich. Despite multiple weather forecasts predicting gentle breezes, light clouds and no rain, it was drizzling leaving our home QTH at 06.00Z and on arrival after the 40-minute drive to get here, it was as appealing to an outdoor enthusiast as a wet Wednesday in Wishaw. It was raining but not pouring, cloudy but not foggy, breezy but not windy, chilly but not cold, miserable but not unbearable. Just dreich, in fact.

Our objectives were the twin two-pointers of Meikle Conval GM/ES-051 and Little Conval GM/ES-057. They lie close to the small town of Dufftown, famous worldwide as the home of celebrated whiskies such as Glenfiddich and Balvenie Double Wood, the latter a particular favourite of mine. Accompanied as usual by XYL, Ann, and YK9L, Sula, we avoided the usual trek from the town by seeking permission, readily granted, to park at Dufftown Golf Club, a saving of about 1.5miles on the walk-in: 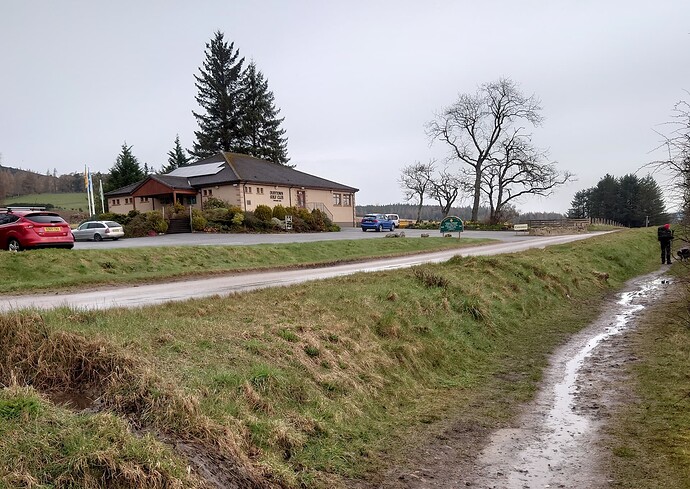 A short walk along the roadside path then a right turn up a farm track starts the ascent to the saddle between the two hills. On the way I spotted this instruction which I assume is directed at Old Hams as well as Young Birds…!

By now it was wet and the state of the track underfoot reflected not only the current weather conditions overhead but also the melting of recent snowfall: 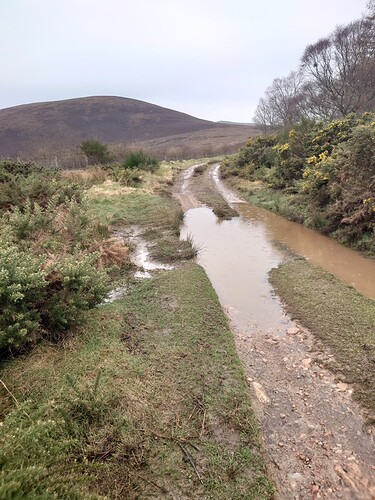 On reaching the saddle, there is a choice - Meikle Conval (571m) to the left or Little Conval (553m) to the right. We opted to start with Meikle Conval GM/ES-051. The path is peaty and boggy across the heather moor and it’s a relatively unrelenting pull up to the summit, but the pain doesn’t last long as it’s not a huge hill: 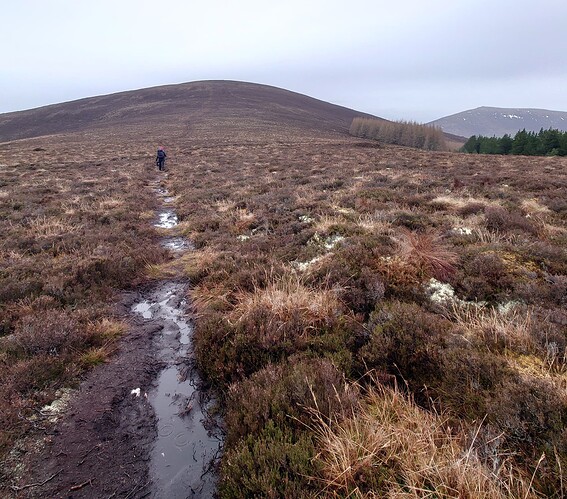 On the summit it was wet and surprisingly breezy so the tarp was set up to provide some shelter for the operating position. The rig for the day was the KX2 with a W3EDP inverted-vee on a Sotabeams Tactical Mini 6m pole. It was still raining, despite promises of blue sky in the distance, but the cloud lifted a little to allow some fine views across to the adjacent 841m Ben Rinnes (GM/ES-021) and behind it the Cairngorm massif some 25miles away: 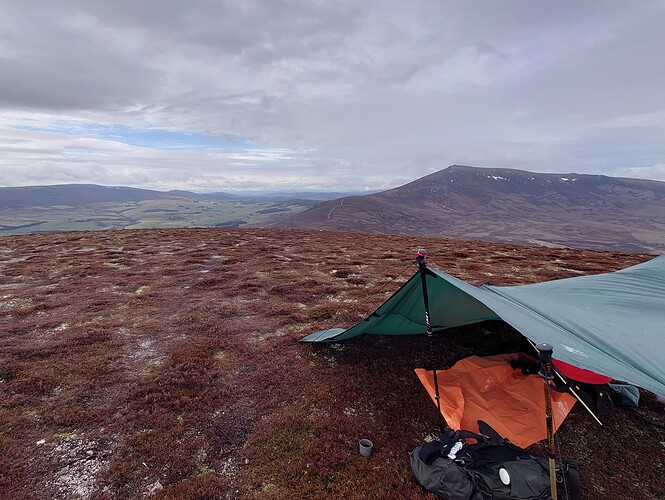 As a one-off experiment, I left the hand mic at home and instead brought with me my Heil headset with boom mic. With it on Vox setting I was able to work hands-free. My first CQ on 20m at 09:05Z brought an immediate 5/9 from Spain and in the next 20 minutes or so I worked 20 stations in seven different countries, including six excellent S2S calls with Germany, Italy, Switzerland and Hungary, mostly at 5/7 or better. My second SOTA activation was complete. It was a wee bit exposed and very wet but we were grateful for the unforecast breeze being manageable: 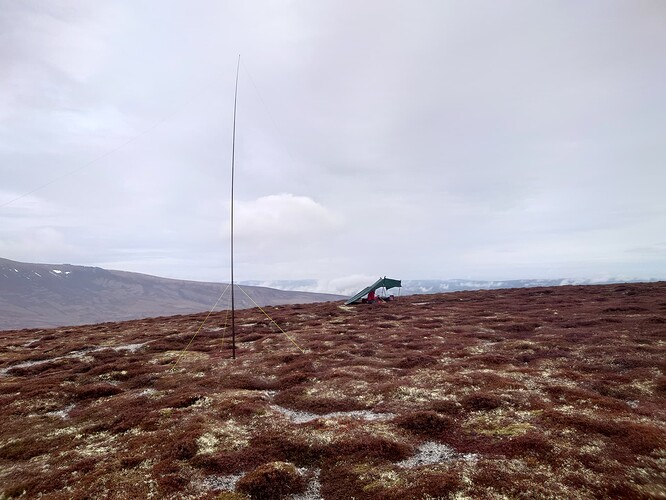 After a swift slurp of coffee from my flask, everything was packed away again by 10:00Z and it was time to head off Meikle Conval and down, then up, to Little Conval ahead: 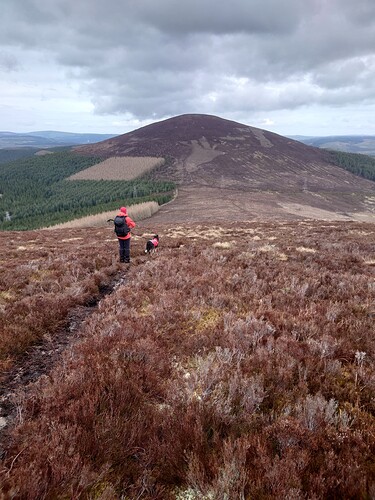 In improving weather, it was another haul up the hill but this time on a well-worn and mercifully drier Land Rover track which zig-zags up the slope. Well, for enthusiastic Mountain Goats there is a path that heads straight up, but for Mountain Plodders like me, the longer but easier zig-zags to the right seemed preferable: 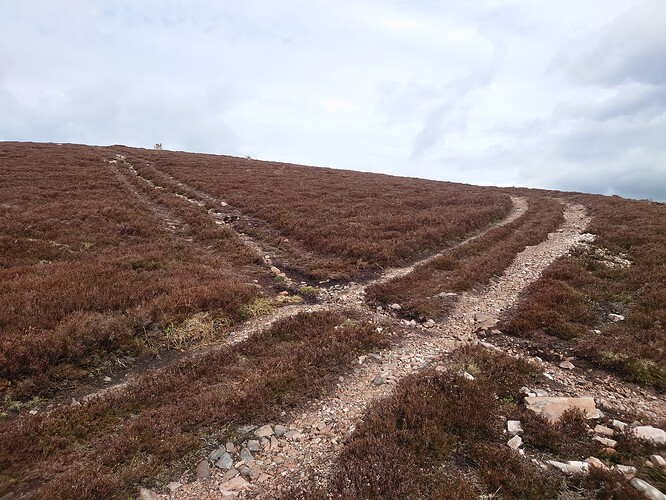 I’m still working on regaining my former hill-fitness after long spells of illness and thought I was doing quite well until passed by two different sets of hill runners, sprinting up the slopes as though running laps of an Olympic stadium. I tried not to feel disheartened and told myself that it was only because I was hauling a rucksack with radio gear in it on my back that I couldn’t match them. In my dreams, sadly…!

We were on the summit by 11:00Z. Despite the weather overhead clearing, the breeze rose and the peat/moss/heather combo underfoot was akin to a dripping bath sponge. 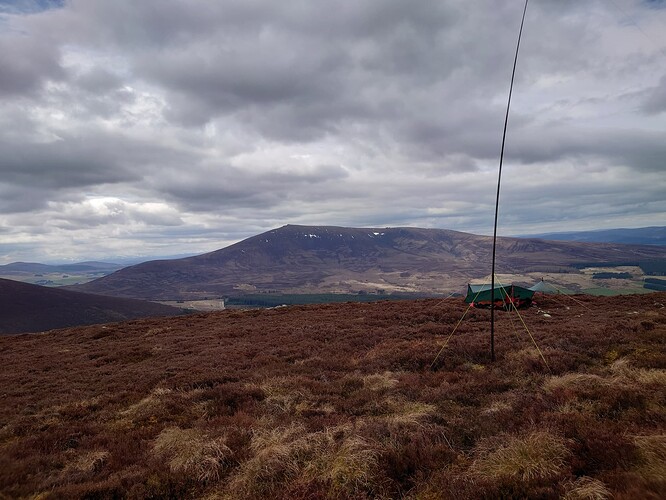 Band conditions were less favourable by now, unfortunately, and I was unable to use the Vox setting with the headset as the buffeting wind kept switching it on! No matter, back to button pressing and on 20m, six QSOs included six different countries and another S2S with Switzerland. Also logged was the omnipresent @F4WBN for the second time today. I once read here that if you don’t get a call from him your equipment must be faulty! Thank you, Christian, we are all indebted to you for your tireless chasing. Activation number three now complete. 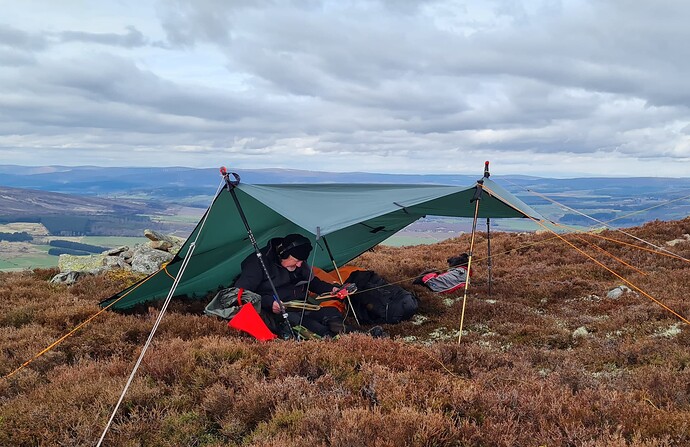 The weather continued to improve, eventually offering good views to the north-west across the Moray Firth to Ben Wyvis and to the distant mountains of Sutherland and Caithness.

As we descended once more, out of the wind, there was at last some warmth in the emerging sun and Sula had a look about her that suggested she would have been happy to stay for a while longer. 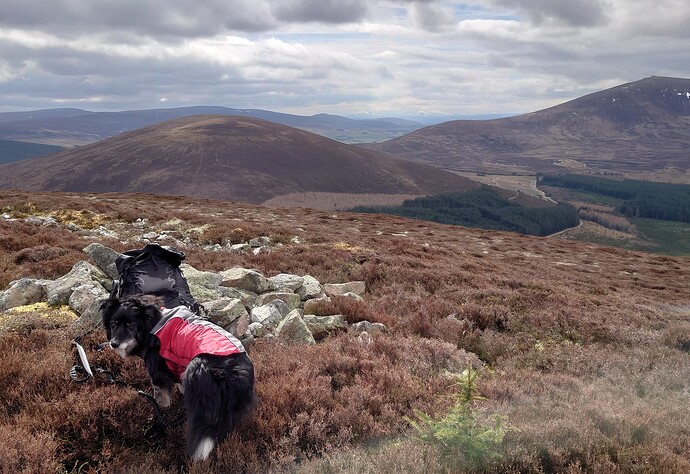 We felt the same but, unfortunately, we had to head down and were back at the car by 13:00Z. I’d gained some good SOTA learning points as my radio experience expands and Meikle Conval with Little Conval had given us a fine morning. In fact, as I regain my fitness, one might say it was a welcome spell of Conval-essence…!

All in all, it was a good activation. Thanks to the Activators and Chasers who helped turn an initially dreich day into a subsequently splendid one.

Now for a wee dram of that fine Balvenie whisky from Dufftown to ease my aches and pains while we sit with the maps planning the next one. Cheers.

You bet - or maybe next to next…! Thanks.

Great report and photos Mike, thanks.

Thanks Geoff. Very much appreciated. 73. Mike

Well done for persevering in the rain. I actually set off for Morrone on Friday but wimped out at Ballater because of the unforecast wetness.

You can have an extra drink on me. Looking at that dreary weather I am glad I left that behind when I moved to east Asia. Congrats on the activation. Good job.

You can make this into a three hill day from the Golf Club by walking up the fairways to the top tee and then up through the woods onto Little Conval. Then your route to Meikle Conval, drop off the other side and do Ben Rinnes then back down and the roadside trudge to the Golf Club.

Thanks Hans. As a born and bred Scot I’m well acquainted with the saying that if you can see a hilltop it’s about to rain and if you can’t, it’s already raining…! We just have to get on with things. Thanks for the message and the extra drink though - very much enjoyed….

Good shout Barry and perfectly feasible yesterday, especially with the improving weather. Need to get my fitness back first, though. Not sure my hill-leader qualified XYL would settle for a driving role.I could always ask….!

actually set off for Morrone on Friday but wimped out at Ballater because of the unforecast wetness.

Thanks Simon. I did consider that, too, I have to admit. The KX2 is not totally waterproof so perhaps the FT-818 would have been a better option this time. All was well, though, thanks to the tarp and various dry bags. 73

Excellent report, I’m just getting ready to activate ES-051 this afternoon, haven’t done much SOTA for a while, and it shows! I won’t be taking up Barry’s grand plan of doing these two and ES-021, that would kill me!

I’m just getting ready to activate ES-051 this afternoon,

Excellent. It:s a much better day today so hope it’s a bit drier on the path for you. Have a good activation. 73 Mike