Double Activation and near catastrophe

Yesterday, I decided to undertake a last minute activation of two summits, Table Rock (W4C/US-006) and Pinnacle Mountain (W4C/US-002) in SC. Last minute being I decided at noon I would do it, as I had the day off and the schedule cleared. I decided to take my POTA rig (Xiegu G90, Chameleon MPAS Lite, and Powerfilm Lightsaver Max solar battery) since it was already assembled in the corner. It would be heavier than average for me, but I wanted to test my new radials I home-brewed, so off I went.

I arrived at the trailhead at 1:20pm Eastern to undertake what should have been an approx. 11mi hike with 3800ft EG. It would instead be a nearly 16mi hike with 4800ft EG (more on that later).

After hiking the ascent to Table Rock, I set up the antenna but only had space for one radial due to some substantial growth in brush since last year. I called CQ on 2m using my HT during setup, and netted 1 contact, then I was set on 20m. 2 contacts on 20 over the span of 20 minutes, with another 3 in there that were busted. I was heard, but just couldn’t make out a letter or two of the callsigns. I eventually switched to 40m for the last necessary contact, and had it fairly quickly. The problem is that I was now behind on time.

I quickly hike to the second summit, Pinnacle Mountain, but probably over-exerted myself. I only had 12oz of water left when I reached the summit, and would have a little over a 4mi hike to descend approx. 2000ft. On this summit, I was blissfully alone, and was able to lay the full set of radials out. I made 5 quick contacts on 20m, two of which were some of the busted ones from the previous summit. I had one busted contact with a South Dakota station.

I was about 45 minutes behind schedule at this point, so I quickly disassemble the station and pack it up, beginning my descent after I called the wife to inform her I was on the way down. I noted a text from a friend that recently acquired his General license, asking an antenna question, so I answer it as I begin walking, and put the phone in a waistbelt pocket I don’t normally stow it in (uh oh).

I note that I have 12oz of water for 4 miles of descent, so I make a mental note of how I plan to ration it out until I can refill at the trailhead fountain. I took the time to snap a quick photo showing the first activated summit off in the distance: 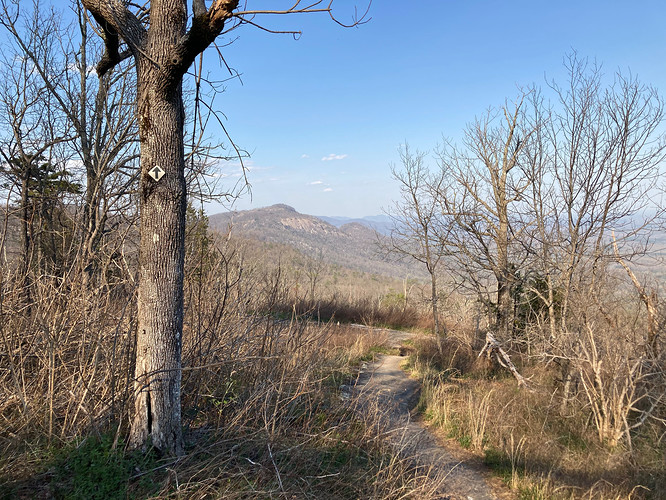 When I cross the first mile at a blistering pace (half running down the trail until I reached more technical bits), I note that somehow my water bottle had fallen out in the previous mile. Great. I immediately dial back the pace to account for the compounding effects of dehydration while running, and determined that being late was better than injury.

I made it to mile 2, and noted a mountain spring near the trail. I happened to have a compressed spare water bottle, so I fill it up without purification (didn’t bring any), but felt ok about it due to the elevation, small stream size, and complete lack of development in the area. I pick my backpack back up, and continue down the trail.

I make it to mile 3 and realize that my cell phone is gone. The zippered belt pouch is half unzipped, and the iPhone is nowhere to be found. Bad news, particularly as I had drunken 75% of the spring water on the descent, expecting to refill it soon.

I turned around, and hiked roughly 2 miles back up the mountain, gaining a near additional 1000ft. A fellow hiker I had passed hours prior asked me if I was looking for my cell phone ( a hiker I offered timely advice to, and spared an unexpected night on the mountain from a wrong turn). The hiker handed me my phone, I expressed deep gratitude for their watchful eye that found it on the trail, and headed back down.

On the descent this time, I held the phone in my hand out of an irrational fear that it would be lost again. I came across a patch of trail where I briefly regained cell service, and saw my freshly licensed friend calling me. I answered the call to share the story, and ask him to call my wife to let her know I’d be even later than expected, but before I could, he began to excitedly tell me that he was on his way to the trailhead to meet the other hiker to get my phone for me. He stated that he had heard on the 2m repeater that a phone was lost on that trail, and my friend made the connection that I was on that trail. Information was exchanged, and he was prepared to drive the 1.5hr from his QTH to the trailhead to help me out. It ended up being unnecessary, but what a remarkable example of happenstance that amateur radio and a random act of kindness collided.

I then proceeded back down the trail, remarkably dehydrated, starving, and with hurt pride. I made it back to the car, and home safe and sound (but hurting), able to log my contacts now (I used a phone app for logging on this trip.)