While being in the Friedrichshafen area for HAM Radio 2016 we plan to activate DM/BW-348 Gehrenberg on Saturday morning June 25 from 08:00 till 10:00 UTC.
We plan to be qrv on 40 and 20 mtrs cw and phone, maybe other bands as well if enough time and wx condx allow.
Calls will be DL / homecall /P
For two of us it will be our first SOTA activation so hope we will do all things right

Hope to hear you then.

Good luck with the first SOTA activation!! Make sure you’re back in time for the SOTA presentations at HAM RADIO in the afternoon!

Here’s my report on my activation of that summit last year on the way to Friedrichshafen.

Preparation: As I was picking up Colin M6BOY from Munich Airport and travelling down on the Thursday to Friedrichshafen for the “HAM RADIO” event which started on the Friday we had a li…

Dr OM’s,
It will be busy there. If weather permits Frank PC7C and myself will be on this summit at 07:45.
Hope to see you.
73 de geert pa7zee

Hi Dear,
If wx permits, I will be there.
There are many with my same idea!

I saw some reports that you were qrv.

I do not understand…
We were at the summit Saturday morning 0800 till 1000 UTC, so from 10 till 12 local time and did not see any other amateurs, only two men on mountain bikes…

btw we were not vy succesful in making QSOs, but that was due to our poor antennas and other equipment as it was our first SOTA trip

Hello Coen!
How was it possible?
when I arrived in the parking near the road I saw a gray car from The Netherlands going away. I thought that on board there were pc7c and pa7zee. I had a grey RAV4 and I was in company of my YL.
I was parked near a only car in the parking, BMW stationwagon series 5 black from Denmark.
Anyhow along the path I took some photos.
I arrived on the summit using the gpx, so I’m definetely sure I was on the highest point. Some meters above the point I settled my antenna I saw a grey car stationwagon parked on dirt road.
It seems crazy to me that we were just a few dozen meters far.
I upload the foto of my activation. 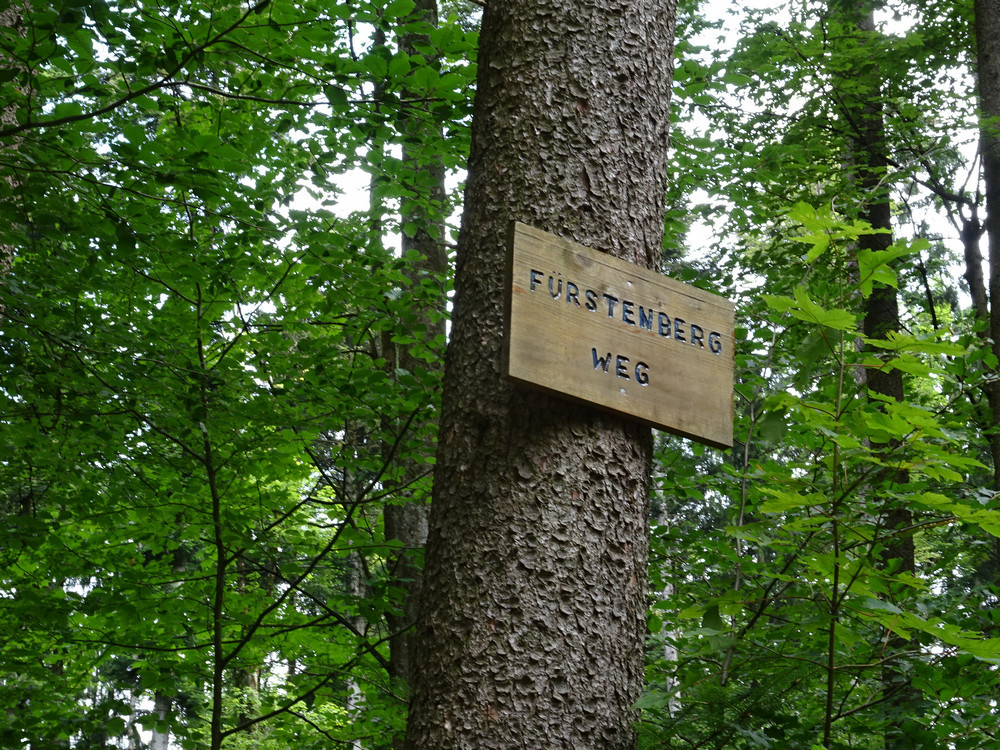 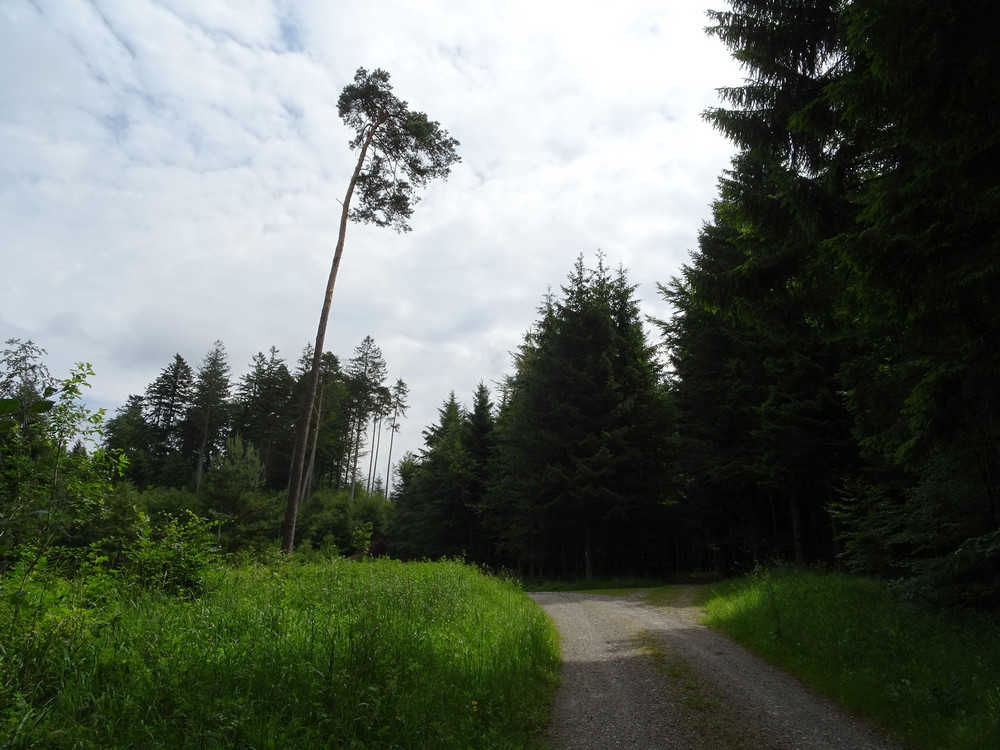 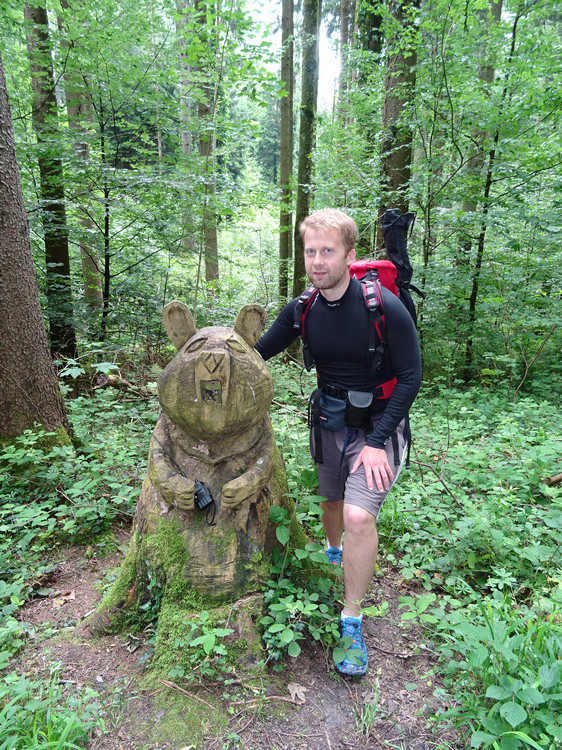 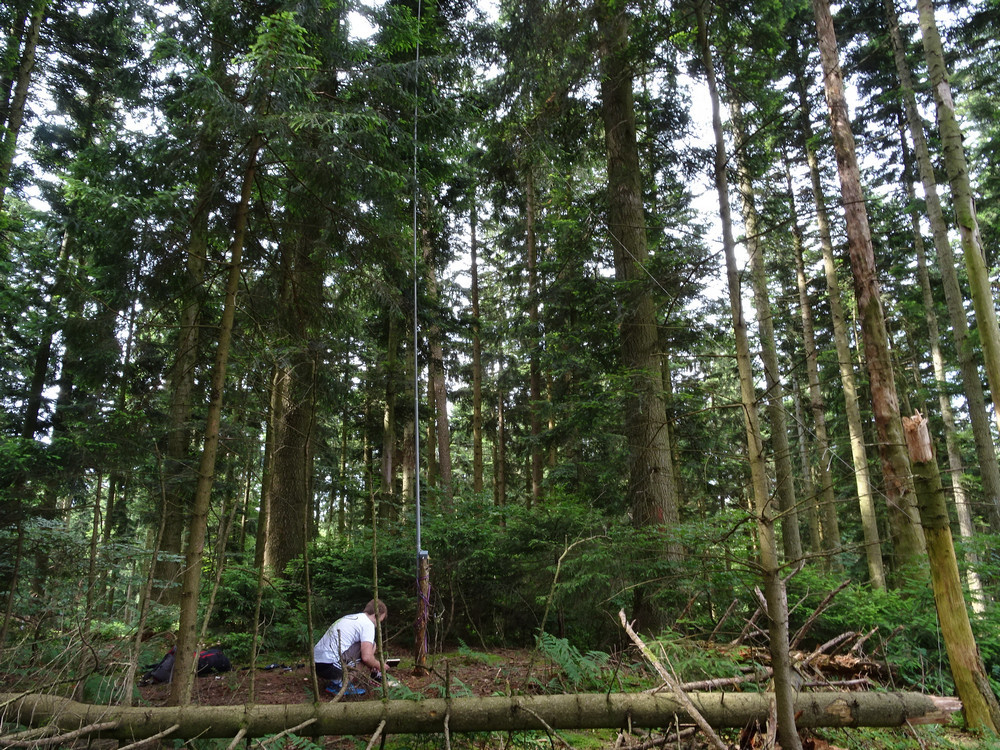 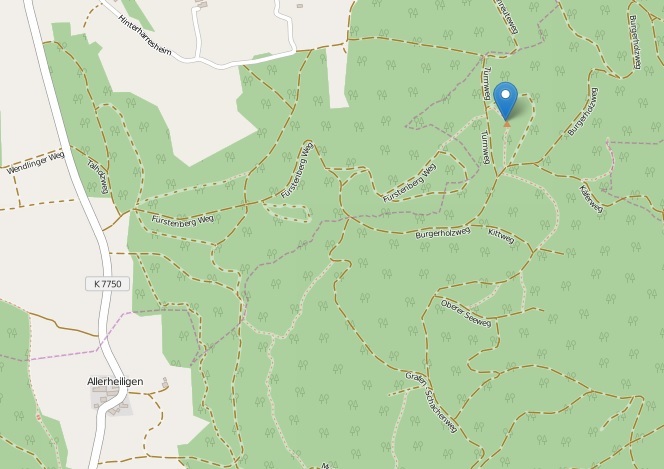 do you recognize the place?

Dear Coen and Roberto and Ed

I went to operate from DM/BW-348 some years ago. I parked at a BBQ Platz and walked some way into the forest on a track to what I believed was within a few metres of the highest point.

The activation zone is large there as we know the rules permit operation within 25m of the highest point. It would therefore be possible for several activations to take place at the same time in different places in the woods on different bands on the “summit” without an operator knowing of the existence of the other operators being on the summit at the same time as they were. There would also be several places to park a vehicle inside or outside the activation zone.

Congratulations Roberto on a successful activation.

Coen - with more preparation you should be successful on your next attempt at SOTA.
If you had been able to access SOTAWatch via the RRT App, or SOTA Goat or even the SOTAWatch on your phone, you would have been able to self spot your frequency and also see that Roberto was operating in the vicinity.

Ed - sorry to see the transistor burned up again in the linear. Your mentoring Colin, M6BOY should get him interested in taking up SOTA back in the UK as a Foundation Licensee.

PS I like the look of the carved creature you located in the wood Roberto!

The activation area on Gehrenberg is,as Phil says, very large.
The actual summit is only marked with a plaques several metres off the ground, nailed to a tree in the forest.

Christine and I operated from a few logs stacked a about a hundred metres metres away from this point, and about 6-7 meters below it i.e. well withing the activation zone.
73
Ken

Ken (and also Phil and Roberto ),

Like I said before I was a bit surprised that Roberto stated he was there at the same time and we did not see him…
We were at the actual summit, right under the sign "Höchste Erhebung " attached to a tree, see photos attached.
From that point you have a rather good view around so what I see from Roberto’s photos he must have been at least some 100 metres away from this point and probably behind trees and other plants so that we did not see him…
That we did not hear Roberto on the band was because we were mainly on 7 MHz cw and he on 14 MHz phone I think.
Of course I should have mentioned qrv frequencies in my activation planning message, it would have made things a bit easier, also for the stations that were interested in working this summit.
Anyway, we learned a lot and in spite of all, had some good fun 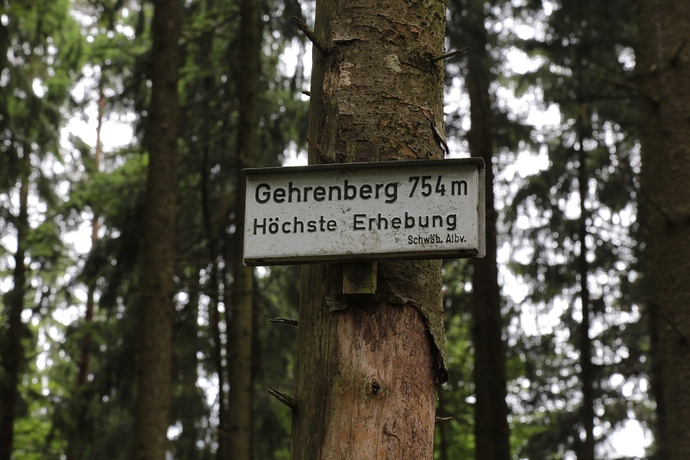 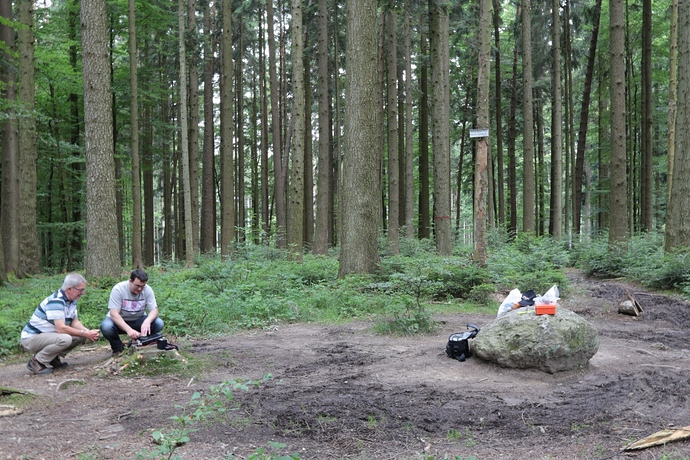 Hi Coen
Yes, you were most definitely on the marked summit, hi!
If I knew how to, I would post a photo of Christine standing under the very same signpost!
We operated a little bit away from the true summit simply because the area was soaked with water and we did not fancy setting up in a pool of mud!
73
Ken

Can’t see the woods for the tree’s.

In this case would have thought easy to miss each other in the woods if open ground could understand it.

But at least got one of you gents on the summit that day.

We were at the actual summit, right under the sign "Höchste Erhebung " attached to a tree, see photos attached.

I was there the day before, and was expecting to meet several SOTA freaks so close to Friedrichsaffen, but there was none. On the other hand, I met to my surprise @DB7MM and @DF9IR on HB0/LI-012 Schellenberg yesterday. There were already activating when I arrived.

Christophe, this was a nice surprise. When I saw somebody setting up a tripod I was thinking about a photographer but not a SOTA activator. Until you introduced yourself I did not expect to meet another activator. We could have easily missed us.
Especially on DM/BW-348 this can easily happen. When ON7DQ an me activated it on Sunday we were sitting in the shelter. I would definitely have missed an activator at the exact top.
By the way: Despite our small distance interference even on 40m was quite small. I expect above 7,150 MHz it would have been no problem. As we were catching another S2S on 20m anyway, I just postponed 40m a few minutes.
We were not the only activators on HB0/LI-012 during the days. After we had finished our activation I checked the exact coordinates of the summit and nearby found the QSL @HA8LLH had sticked into the bark of a tree the day before: 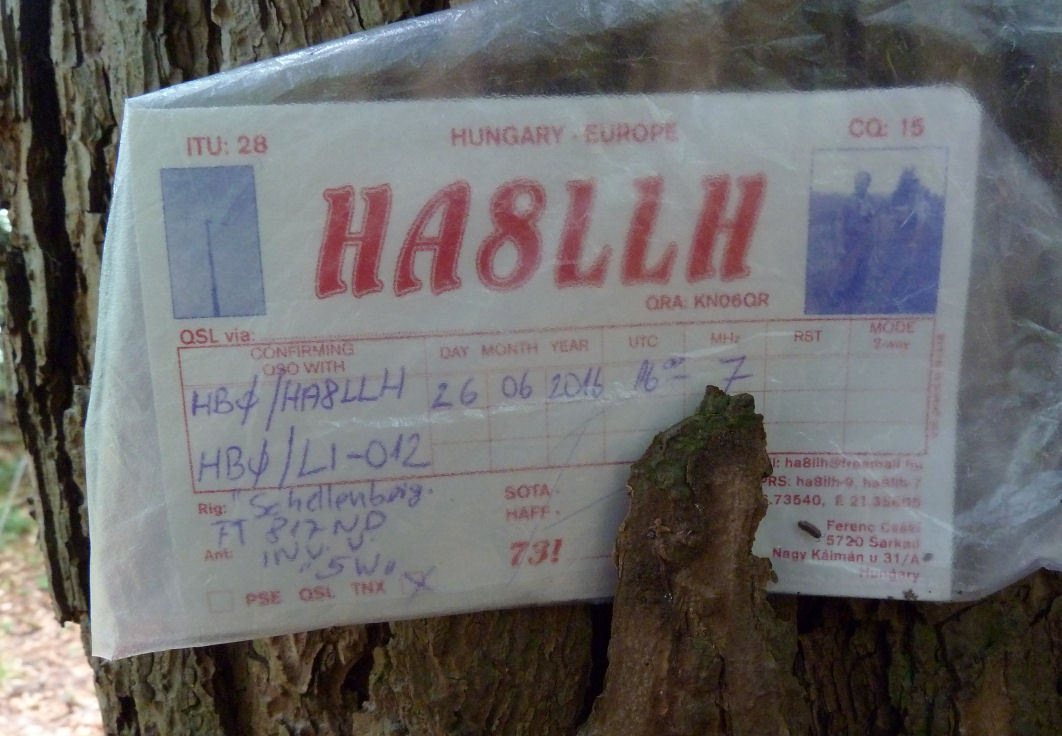 Nice, we had the chance to shake hands and looking forward to our next QSO.