Wonder if that was the Vine in Roebuck Street. If not go there next time you’re in West Brom… Not for everybody, but it’s an experience anyone who likes curry and decent beer should try at least once

No, it was Akash Balti on the High Street.

The uptake of Ver 2.0.0 seems to have been much faster in North America than in Europe.

Hi Walt,
Monitoring the WSJTx Groups.io list there are now people reporting that they can no longer get any (or only very few) decodes with their 1.9x versions of WSJTx - so (at least in the US it seems) most people have moved to v 2.00 as request by JT. I’m actually seeing lots of traffic when using WSJTx v2.00 where a couple of weeks ago that was not the case, so it looks like also here in Europe people are moving over.
My previous thought that JT may have changed the defualt frequency on 20m for FT8 was a red herring - the frequency I came up with on first start was one I had entered for a DXpedition.

By the way if anyone is getting the error panel related to accessing LOTW coming up with v 2.00 GA (even if you don’t use LOTW!) it is due to a problem with SSL verification - the solution is documented in the V2.00 quick guide document. There’s a pre-prepared package to download and install, after that all is fine.

Interesting BUT I have to query his judgement launching a DSB data tcvr for 40 and 20 m. I know it’s QRPp but it’s still putting out half its power where it will be a nuisance. Other weak signal ops may not be best pleased. I see DSB as OK on VHFand above but on 40 and 20 it should be limited to an occasional experiment unless it is on the established AM nets where the extra bandwidth won’t increase QRM. A modified BITX makes more sense IMO. One sideband, good sensitivity, up to 10 W.

Plenty of other Chinese rigs out there that give all HF bands.

If you must go DSB then MFJ sell proven sets.

DSB receive isn’t great either. It looks more like a toy for experiments (think Pixie) rather than something people would actually use on the air in meaningful numbers.

…let’s hope that you are right!

Hi,
I built a DSB tx (1 W, 80 m) many years ago. It was a good learning experience. It’s not a bad thing to build one from a kit of bits but this unit is really just a fun thing and not a serious bit of kit. Nothing wrong with fun of course.

Oh and I may take my Frog Sounds tcvr (Chinese pixie - translated,) out for a spin this weekend. I paid $3.50 AUD incl postage so clearly not going to challenge Yaesu. Again a bit of fun.

That’d be about T4 then

As long as it doesn’t croak, mid QSO.

Haven’t assembled my kit yet.

I’m set up here to chase Sota on FT8. It takes a few min’s to switch everything over and boot up the laptop. I can Chase FT8 from HF to UHF. I can chase FT8 on 50mhz using a Vertical. From my point of view I need to know who is using FT8 by watching the Alerts for activations and I will do my best to listen for them wherever they are. It would also help to know what HZ you were transmitting on split or even. I am very keen to Chase my first FT8 Sota outside of Europe. So when not working 12hr shifts Days or Nights I will be watching the Alerts page for FT8 and of course other Sota activations. Looking forward to working you soon whatever Mode.

P.S. 18mhz works well for me to Nth. America & Sth. America I have a good sea path on the west coast of Wales. 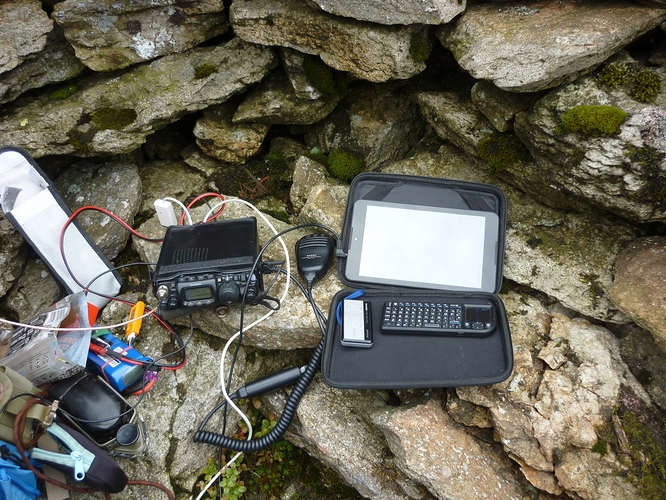 I’m running BktTimeSync to read the time (thanks to whoever gave the link).

Hello Barry
Had the same issue with Surface Pro and KX2 using external usb hub and a cheap external soundcard. Looks like laptop is producing RFI heard in the radio although I had lot of success earlier this year from Martinique (operating from boat). Possibly quality or screening of the usb cables plays some role. Will try to use some RFI filters on USB cables.

Also keep your laptop as far as possible from KX2 to help reducing interferences.

Up to now, FT8 has been a luxury addition to my SOTA activating - a peculiar novelty if you will.

However, it came to our rescue here in Wales the other day. We were on GW/MW-016 around 7pm local and I’d opted to deploy the 20m groundplane antenna. Without due research as to propagation, this was a poor decision.

I managed to work OK2PDT, but couldn’t raise any further activity. Scanning around the band, there was a couple of weak watery CW signals, while the SSB section was completely deserted! Meanwhile, Jimmy HGY was stuck on two 2m FM QSOs.

I did of course have the option of taking down the antenna and putting up the SOTABEAMS Bandhopper 4 instead, thus making 80m or 40m an option - so I wasn’t overly concerned.

However, the Windows tablet, interface and cables were in the rucksack, so I went onto 14.074MHz FT8. The frequency was buzzing with lots of loud signals! So was 20m propagation dead - or was it just that everyone was on FT8?

Anyway, within a few minutes, both Jimmy and I had collected the extra QSOs we each needed to qualify. And for the first time, FT8 became a useful weapon in our SOTA armoury, rather than a quirky add-on!

My last FT8 activation is more than a year back, and I don’t think, that I do it again. I had 15 contacts, but no one was a SOTA chaser. I had posted an alert, but no resonace.
So I am back to CW, and each time I have a little pile up when calling.
I had no problem with time synch when on FT8, I used a GPS-RX via USB, worked vy well.

I have a lo-tech approach to time sync - I always carry a radio controlled clock with me on activations (I think mine RXs on 77.5kHz). Every time I start up the Windows 10 tablet on a summit, I go into Date/Time settings and manually reset the seconds while watching the clock! This keeps me sufficiently in-sync for the next hour or so!

I am now regularly getting calls from known SOTA chasers on FT8. @IK2LEY and @F5LKW are regular FT8 chasers for instance. Still plenty of calls from other stations too of course, but I’m happy to spread awareness of SOTA to the uninitiated too!

Does this mean it runs at twice UTC?

I think it tunes to the LF time signal from Germany rather than the one in Cumbria.