Cypress Peak (VE7/GV-023), located just East of Garibaldi Provincial Park and not to be confused with the Cypress Bowl ski area in North Vancouver, is a very pleasant day scramble into the alpine. The route to the 2086m summit is a classic BC adventure of logging roads, creek jumps, talus slopes, and alpine ridges. Despite its popularity with the weekend crowd and proximity to Vancouver and Whistler there are very few trail markers and virtually no signage. 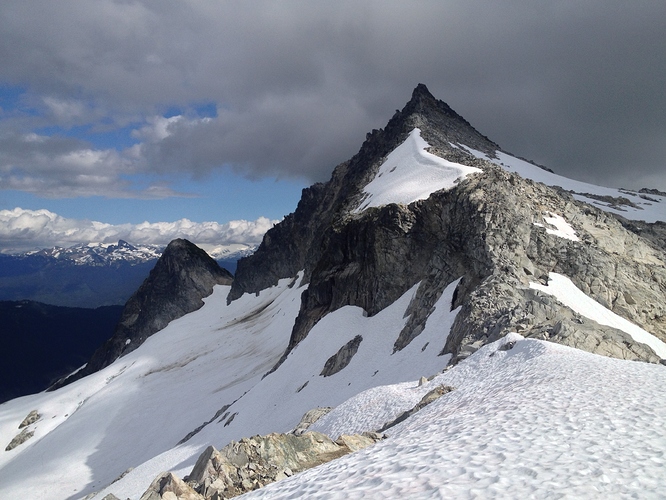 The approach to Cypress Peak begins on the Chance Creek Forest Service road, which is 4WD accessible to a deactivated road at ~ 9km. Numerous and often deep water bars block any vehicle access beyond this point. Those with 2WD will find a parking area at the ~7km, adding several kilometers and ~150m of elevation gain to the trip. I opted to leave the car at the 2WD parking lot and proceeded by bicycle up the logging road towards the trailhead. 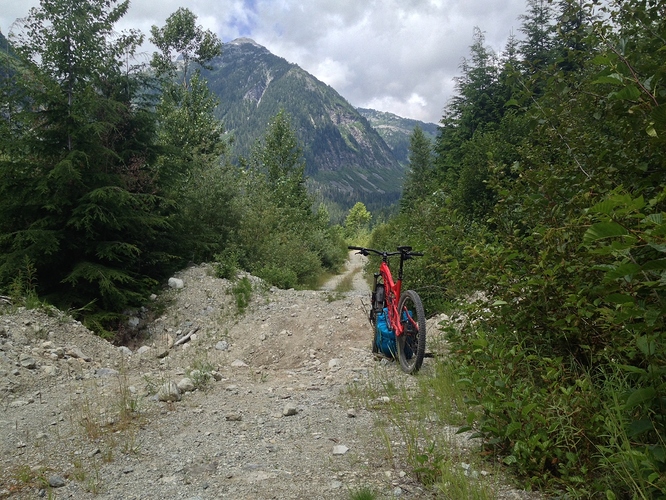 That day the sky was partly cloudy, which was a relief given the high temperatures of the last two weeks. The logging road continues in its undulating state for 3km beyond the 4WD parking area with progressively larger and deeper water bars that made progress by bicycle arduous and frustrating. Fortunately, it didn’t last too long and eventually I was able to stash the bike next to a fallen tree and get off the road and into the woods.

There is a brief bushwhack descent to the Roe Creek crossing. Mercifully it was late enough in the season that crossing the creek was not an overly harrowing experience. From there the route climbs steeply up a talus slope next to a permanent snowfield towards a waterfall and another creek crossing. While the snow is an attractive alternative to the loose rock and shifting boulders of the talus slope, the widening holes and warm temperatures cause most (myself included) to stay off it. The quick rise in elevation also provides some great views of surrounding peaks, including Black Tusk (VE7/SL-016). 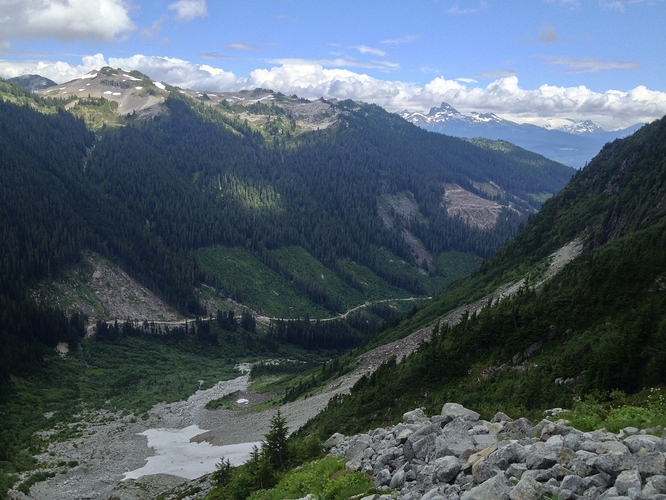 The ridge to the summit is a combination of snow and steep rock with a few 4th class sections of scrambling. The crux is an enjoyable 20m pitch of granite blocks followed by some 3rd class scrambling to reach the top. The whole thing took maybe 45 minutes and it was unfortunate that the best climbing was so short lived. Still, a lovely finish to a steep climb from the valley. 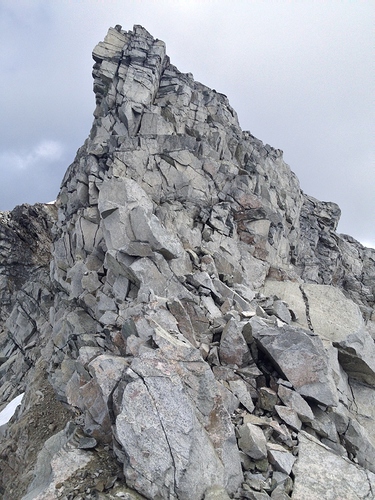 Activating the summit was surprisingly straightforward for such a small area. The ridge is quite thin and I wasn’t sure I’d be able to find enough space to set up an antenna. An avalanche probe jammed into
the summit cairn made a support for a 20m inverted V dipole and I was able to make 5 contacts on SSB, despite the band conditions. I’m quite new to HF operation so it’s possible that I could have made even more and just didn’t notice the difference, but all I needed was 4 to claim points and I was grateful to get them. Of the two local stations trying to contact me only one was successful, Keith VE7GDH from Saltspring Island. I suspect that VE7HI was calling me from White Rock near Vancouver, but I had trouble making out the call sign and there was no evidence that he heard me either. 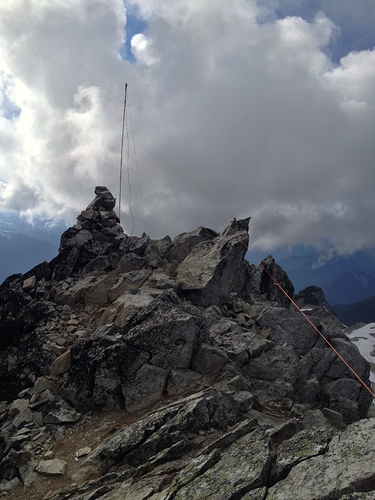 I have been playing with the idea of trying an end fed halfwave antenna to cut down on the amount of coax used during these activations, though from what I read I may be losing as much output power to the
compromised nature of the setup as I would from the RG174 that I currently use. If I do I’ll probably pick up the other half of the Pico series from SOTABEAMS and get an EFHW tuner. Given the band conditions of late I will be adding a couple of 40m linked sections for my activation of Mt. Cheam (VE7/FV-007) this coming weekend. We’ll see how it works out! 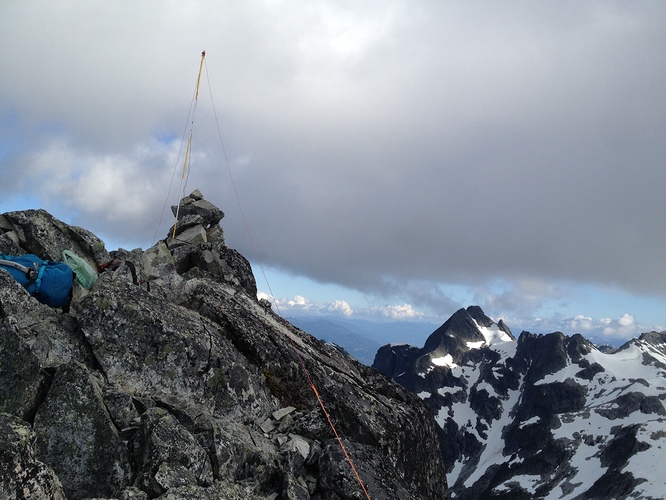 The descent was a simple retracing of my ascent route. The short sections of snow that I felt comfortable crossing made for some fun glissading. There was only one incident of note before I reached the logging road again. At about 1550m I stepped onto a loose rock and took a short tumble, tearing my pants. There were fortunately no major injuries and I had a few battle scars to show off at work on Tuesday. 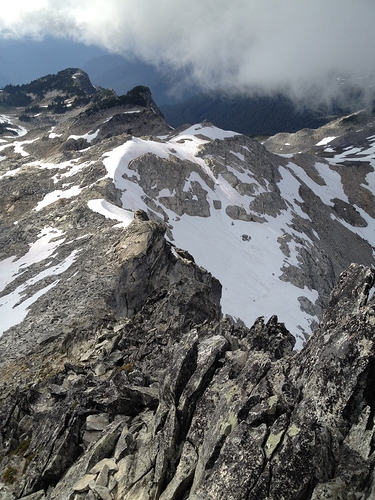 Bringing the bike along was definitely the right decision. A descent that would have been three hours by foot turned into a 45 minute joyride down the road. The water bars were, of course, infuriating that late in the day, but once I regained the main road it was a breeze to get back to the car. Full suspension definitely recommended.

Follow the link for a full trip report and more pictures: https://summitsandradios.wordpress.com/2016/08/04/cypress-peak-more-sota-in-ve7sl/