Inspired by Mike 2E0YYY, I thought I might have a good look at building a colinear. It’s not been used in anger yet, but that will change in a week or two.

I made a similar one, but for 70cm, again haven’t used it in anger yet.
When I get time, a 2M one is getting made too, but with copper pipe instead of aluminium.

Let us know how it works!

There’s little doubt, working VHF FM with a colinear at a couple of thousand feet ASL, is just about as much fun that it is possible to have with a radio.

Working VHF FM with a colinear at a couple of thousand feet ASL, during ducting, is IMHO, as much fun that can be had with a radio.

I’ve been lucky enough to work into half a dozen big lifts with a colinear during SOTA activations on the VHF band and with the exception of the last one where I was just too high, I’ve been staggered at not only the DX, but the sheer number of chasers. There’s little doubting, every Radio Ham wants to work DX on 2m FM and my 600 Km contact with ON/KI6TSF in September, from GW/NW-044, using a 5/8 over 5/8 colinear and low power, shows just what’s possible.

One thing I’ve always paid religious attention to when activating, is the height of the colinear, making sure it is a minimum of 10ft clear of the ground and with my new lightweight poles, up to 15ft.

There’s a photo, taken during high winds at the bottom of my QRZ page, of an 18ft triple 5/8 colinear on a 15ft pole during my activation of G/WB-004 Titterstone Clee Hill earlier this year. 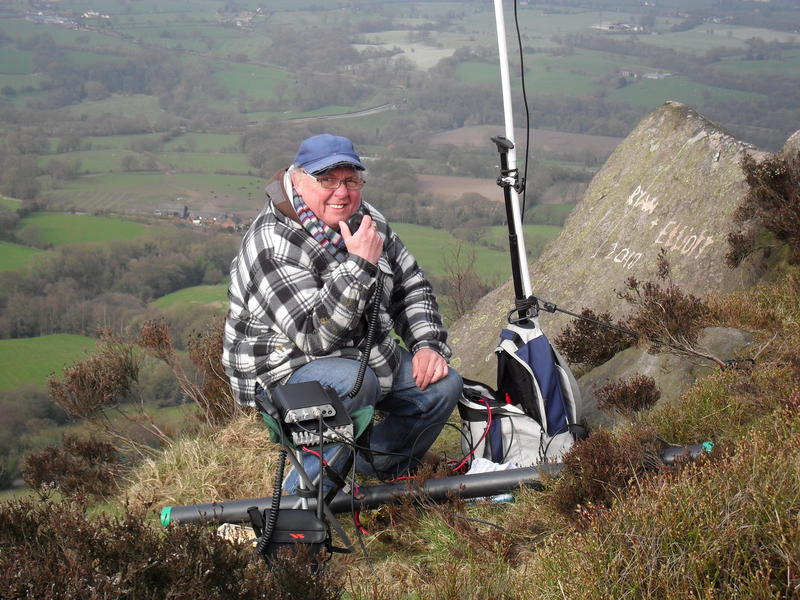 On arriving at the summit, there wasn’t a breath of wind so I didn’t bother to guy it. However, within an hour, things suddenly changed!

When I first started hauling a colinear and poles up SOTA summits for VHF activations, it was greeted with some degree of jocularity, however, it was also greeted by hundreds of chasers. I’m pleased to report, colinears have become de rigueur for those in the know

Seriously Wayne, enjoy experimenting with your new antenna and I’d really value your opinion on its performance.

BTW, I’ve just acquired a Yaesu FT-90, (a rig which certainly amongst early examples, appears not to have been without one or two issues) for lightweight 2m/70cm FM activations in the near future. Yaesu ceased production in 2009, sadly, just before SOTA really started to take-off. If reintroduced, I can’t help but feel, Yaesu would have a real winner on its hands amongst the SOTA VHF/UHF junkies, with this amazing, virtually cigarette packet sized 50w capable rig, weighing less than 650 Grammes and fairly low standby current draw.

Once again, a big thanks for all the kind words expressed on the Reflector while I’ve been under the weather, also many thanks for the phone calls, emails and texts.

Also I’d add my voice to the chorus that you make a full recovery.

In reply to VK3WAM:
The colinear has now been used in anger. It generated a bit of anger (in dealing with electrical shorts). When there is not a short, it works very nicely, and so with a little bit of surgery back at home, this thing will hit the summits again. Details of the activations at:

Hi all, After my building of a colinear antenna for 2m, it was time to try it out, and what better than a SOTA activation. I picked three summits that were close to each other, and where it was pos…

HI Wayne!
Here is a very light and simple one.
Working flawlessly for 3 years.

It ended up being a short that developed in the BNC connector! It was still worth going through and checking each connection to make it more robust.

In reply to VK3WAM:
After fixing the shorts, I got out a MiniVNA to put the antenna through its paces. It was resonant, but not where expected. Turns out there is not so much a flaw in the design, but the antenna feedpoint resistance was lower than expected. I am going to use a coax stub or shunt to match the antenna to 50 ohms.

Hello Wayne,
I’m following your thread with interest. I do have a colinear J-pole and it works very well.

Here my contribution to your design:

I’ll keep an eye to see if you succeed with your improvements, it does worth solving the troubles now that you’ve done the most complex part and to start enjoying with your new gadget.
Take care, 73
Ignacio

In reply to VK3WAM:
I have played with these antennas, in the end I came up with this

There is some twisting because the colinear is long, but the reenforcement seems to have dealt with this problem. All I need to do now is the match and it should be good to go.

In VK, the 2m band is 4MHz wide, from 144 to 148. This is both a blessing and a curse. The curse is that many of the SSB guys hang down at 144.1, while the national FM calling frequency is 146.5. Matching both of these is a challenge, so rather than aiming for 1:1 SWR, I aim to have both of these frequencies at an acceptable SWR. I think if I couldn’t match both, I would go for 144.1

Nonetheless, this project is certainly worth it, as it opens up many, many summits for 2m action. It is also very easy to use on the summit. Attach the end to the top of the squid pole, secure squid pole, raise squid pole, connect radio, operate!

Finally got around to trying mine out today, from G-WB/004, where Mike 2e0yyy sometimes has his HUGE colinear (complete with flashing red light on the top for low flying aircraft, no doubt!

Apart from the bottom copper sheath being on the ground (I really should have taped the top of the coax to the top of the pole, rather than the 1/4 wave wire…) I was quite impressed with the antenna/817nd combination, managing to get further than I have with the 3 element SOTA beam, with the added benefit of not having to turn the thing around

SWR seems to be around 1.5:1 which is ok I guess, although I have no idea about the reactance etc. but I would guess that it would be similar to yours.

I’d agree with the need to strengthen the joins, I’ll need to look into how to do that.

I resisted the temptation to stick my 30W amp onto it!