Connectors and losses on VHF

I completely an activation with a new radio and I’m troubleshooting receive issues.

When I plug in my HT to same antenna without that connector, I heard much more traffic.
To plug in the ‘bad’ radio, I went from a UHF to SMA Female.

How can I test this connector losses? I have a multimeter, NanoVNA, and crappy power meter.

Other ideas to attempt to isolate the issue between Rig, Antenna & Connections?

I’ll bite… First, you can use your multimeter to check the DC conductivity through that adaptor and it should have zero ohms between the two sides of both th case and the centre conductor. Seems unlikely to be open circuit but worth checking.

Then you need to setup a test that uses that adaptor to see whether it is faulty at 146 mhz. The VNA should be able to do that but you’ll need an appropriate load, or the antenna to use as a known good load. If the VNA reports that the load is not a perfect one if that adaptor is in the path to the known good load, the adaptor is under suspicion.

It is hard for an adaptor to be seriously faulty at that relatively low frequency.

The standard way of checking an adaptor is to swap in another just like it and see if there is any difference. Guess you would have done that already if you had the second adaptor. For such testing on air, in the absence of a local signal source (like a signal generator or a communications test set) it’s probably best to use a signal that is reliable but weak. A distant beacon signal if there is one, or a known distant station on the input to a repeater they frequently use. Or a distant repeater that you can hear reliably. The point about the signal being weak is that if it is weak on one adaptor, or one radio, but is unreadable on another, you know there is a difference in either the connectors, the adaptors or the radios. Eventually you have to rule out the connectors as the source of the fault by proving they all work equally well, then you’re left with the radio.

This is why many of us have a really good collection of between-series adaptors and patch cables etc. they are really valuable for testing like this.

Might be worth checking both sides of the SMA connector actually match, with a pin on one and a corresponding hole in the other. There are two forms of SMA connector, the normal and the RP type and it is possible to get them muddled up. Basic stuff which you will know but still worth a check.

There is no universal standard for “UHF” connectors, the thread pitch can vary, and the length of the threaded parts too. So, it is worth checking that your adaptor is mating nicely with the other connector…
73
Adrian

It is hard for an adaptor to be seriously faulty at that relatively low frequency.

Would you want one, Andrew?

I can send you a UHF/N adaptor from my spare box marked “not for VHF” because it’s so lossy above 100 MHz. There are too many cheapish crap UHF plugs and adaptors.

More adaptors may be needed.

I’ve found that some adaptors that look okay visually actually have a poor connection between the locking collar and the body of the adaptor due to poor tolerances and some fail to hold the connector tight to the socket on the rig. The chrome finish on inexpensive adaptors can be a poor conductor, so good quality silvered adaptors should be used where possible for reliability.

There is no universal standard for “UHF” connectors,

Oh yes there is. The standard definition for UHF connectors is that they are all crap.

One problem with UHF connectors is the non-constant impedance of somewhere around 35-40 ohms but that doesn’t bother HF systems. Look inside an HF ATU and you’ll find unshielded wires wandering all over the place for large distances that would be almost wavelengths on higher bands. So the use of a vague impedance on the input and output socket is neither here nor there.

Then there is the awful method of connecting the braid to the connector body for RG8 sized cables. Soldering a cable braid without the inner insulation melting is quite an art. Better methods are used in more modern incarnations of the PL259, some resembling a clamp style N connector.

The killer is the fact that on Japanese radios, the UHF-like socket is not actually made to the UHF standard you’ll see from Amphenol on 53 series connectors. The thread pitch and length of the threaded section is different. These are not UHF connectors but M connectors. The source of this standard is unknown to me but the two don’t mix happily.

Fortunately the PL259-BNC adaptors I put on all my gear seem to fit M and SO239 style sockets and once it’s a BNC I’m happy.

Acknowledge the remarks from Pom and Gerald, both relevant.

But back to the original problem. Using a multimeter and a VNA, can Mike troubleshoot his radio problem?

Thanks everyone for the responses.

Things I failed to mention:

Thank you I’ll check for conductivity on both sides of the connector.
I have an antenna that I can use without the UHF to sma connector and with it. Different radios.

I’ll also order a new adapter. The adapter is suspect because I bought it on amazon.

I’ve got a couple repeaters that I can test the same antenna with two different radios. I bought 2 of the same QYT radios, so I’ll haul out the other one and see if it’s a single radio that receives poorly relative to my HT, or both.

@G4AZS `- The connection on the radio side is snug. I’m unsure of the antenna side. Good to check.
@DG7ACF Thank you - this is exactly the instruction I needed.
@G4OIG Any recommended ‘brand name’ connectors?

Any other relais or radio towers at this summit?
Maybe that just was the problem

Connectors: Usually the good connectors have a brand name stamped on them, with a type number. They probably won’t be sold by amazon.

However with a VNA you can measure the loss through such components and also see whether they have a constant impedance of 50 ohms.

Receiver Blocking: Now that we know others were hearing you perfectly but you were not hearing them, I think we can say this was due to a receiver malfunction rather than a connector. Local transmitters will cause exactly that effect and will not be audible in your receiver. It is likely to be a blocking problem, not a cross modulation problem. Your receiver stays silent because it is overwhelmed with the local signals even though they are out of the amateur band.

Testing at another site or at a test bench without local transmitters will be the next suggested step.

As Gerald said, silver is a good indicator.
Tres Alloy ( CuSnZn3) are high quality plugs, too.
In EU, Telegärtner or Huber&Suhner would be the brands to go.

It is well known by all radio amateurs that each connector has 0.1dB loss. This video using 20m shows it clearly. 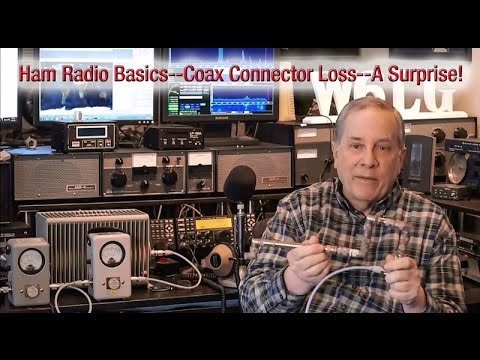 Man shows no loss when using “DC” frequencies? Who would have thought it.

Perhaps you can dig out a video showing BNC / N connectors have worse loss at UHF / SHF than a PL259?

Or maybe find a video that adds some context to the debate so people who don’t understand can learn why it’s not only important to choose the right connector but understand that just because the spec says N connector works to 10GHz doesn’t mean EVERY N connector will be usable at 10GHz.

I had completely missed the fact that the discussion was about UHF/SHF/10GHz. My bad.

It’s not and you’re being obtuse again.

It’s about trying to explain the technical issues in using connectors at RF and helping people who don’t have the benefit of having been taught at university or industry about connectors.

Not really anything in particular. The good ones tend to be hard to find used or new old stock and expensive if bought brand spanking new… makes like Suhner, Amphenol, etc.

Thanks everyone for the advice, videos and additional information.

I also found that K0NR had similar issues with the same radio: https://www.k0nr.com/wordpress/2021/12/kt-wp12-transceiver/

I’m blaming the radio, not the connectors at this point. You get what you pay for.

There was VHF contest that day, so .52 would be busy. I also heard what sounded like repeater net coming through on my Yaesu HT on 146.52 at one point.

Next step is to take the two identical radios to a nearby park and troubleshoot with another Ham. Maybe one is a dud?