It’s been a few years since this was activated. It’s normally paired with an activation of Lochnagar but when I did Lochnagar I didn’t have the “oomph” left to do this as well. It’s been bugging me as there is not much that can be paired with it. But I was going to tag on something else on the way home.

The car park is at the end of a very narrow dead end road and people are warned in advance it’s £4/day to park. No problem, I had a fair bit of cash with me.

But the nice lady on the car park was directing people to the coach park. Job done. But it was going to be busy on Lochnagar. 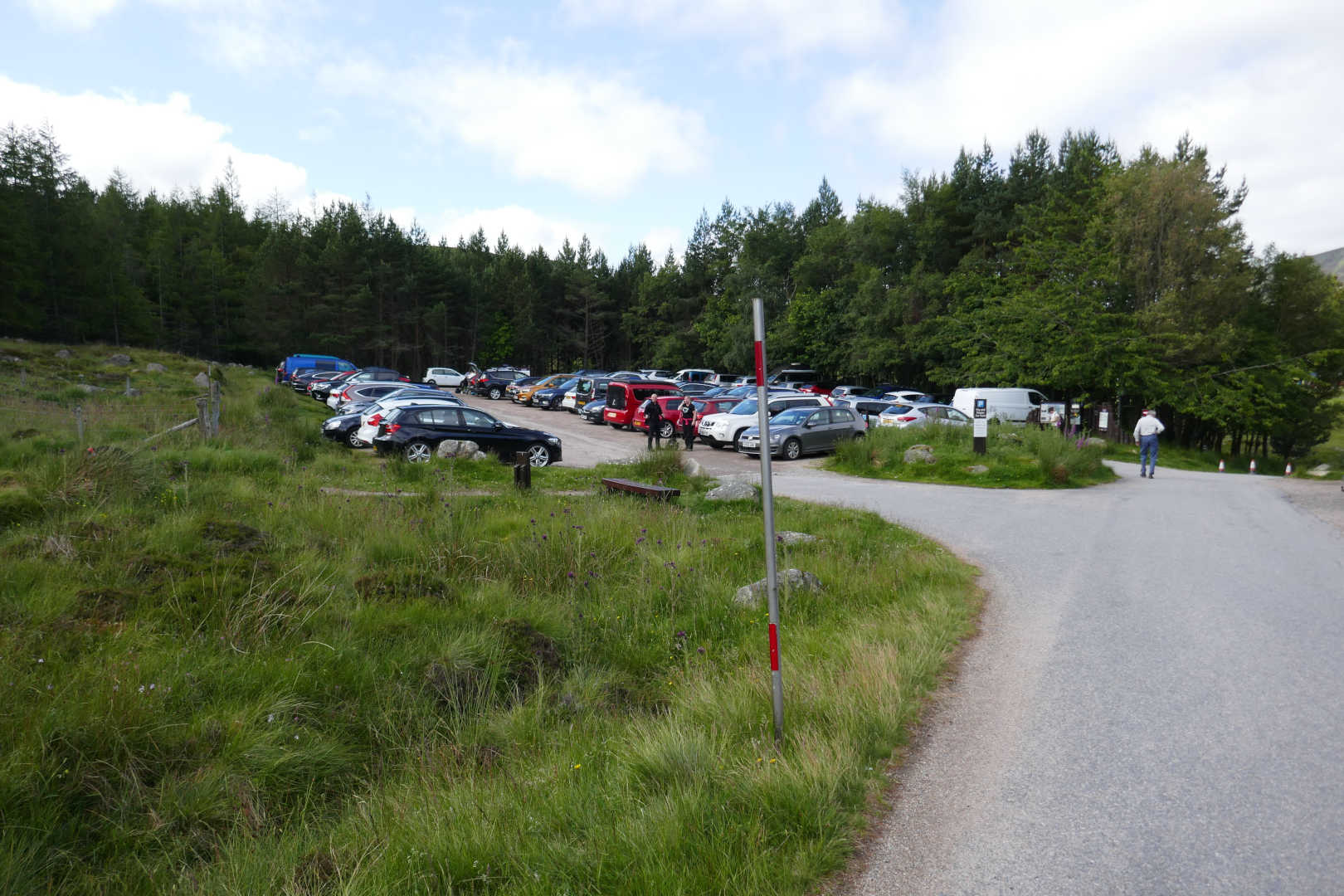 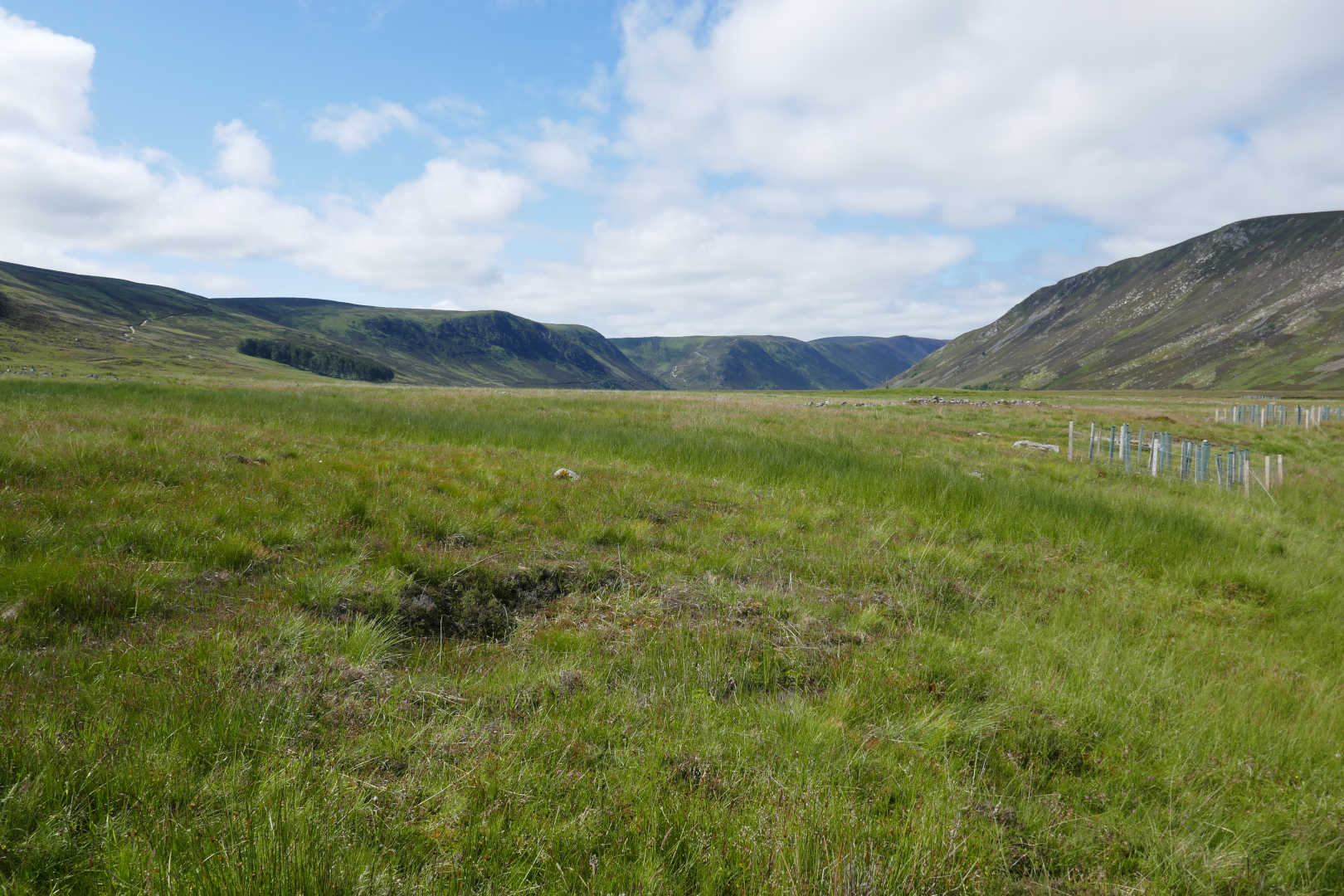 There’s an excellent path althought it’s nearly 5km and 300m of ascent to the start of the Conachcraig path. When you get to the top you get to enjoy Lochnagar and its cliffs (about 500m sheer). 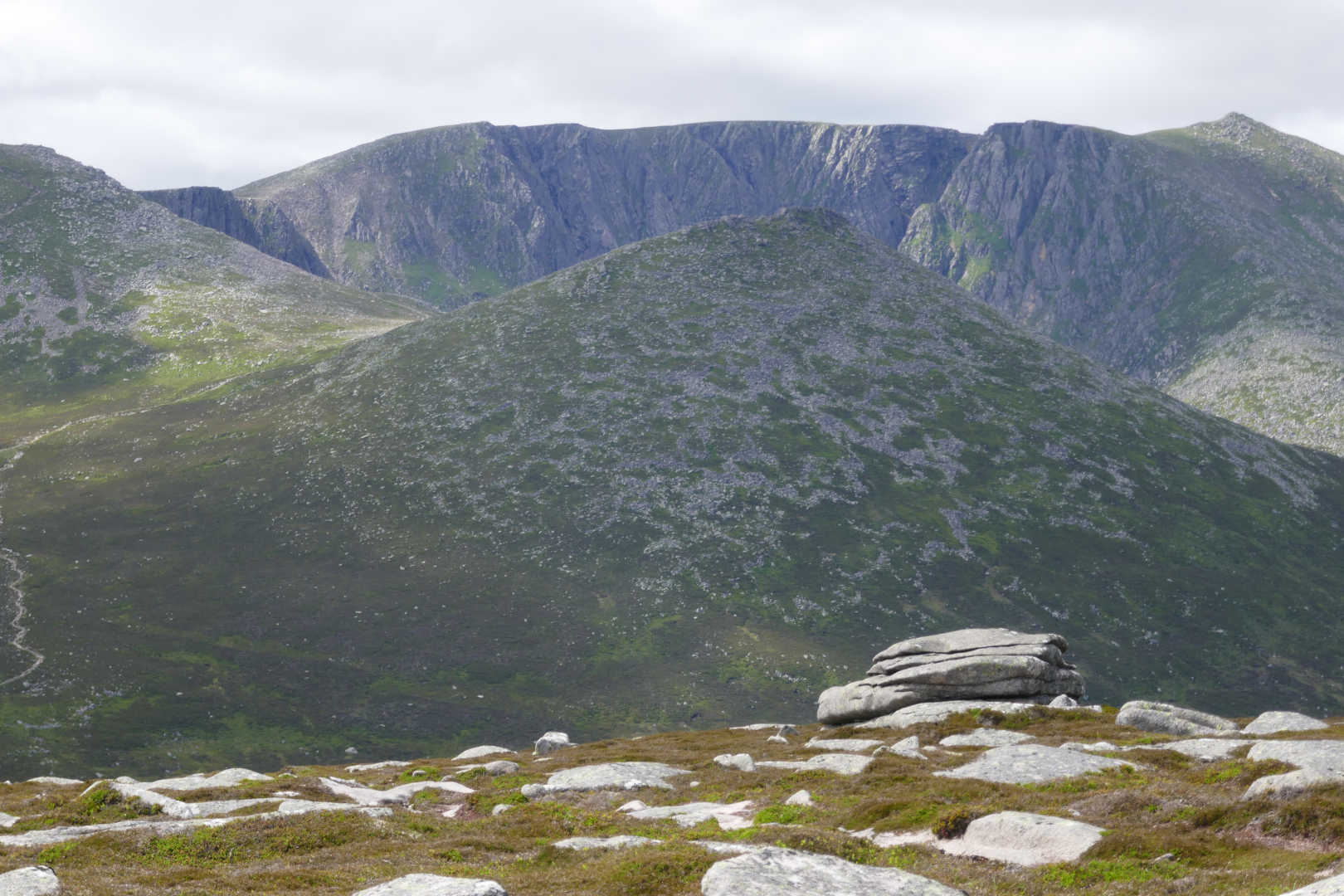 These Granite Tors are the high point I think. I had to stand on them and wave my phone about to get a signal. When I sat down at the radio I lost the signal. Much faffing about to spot myself then. 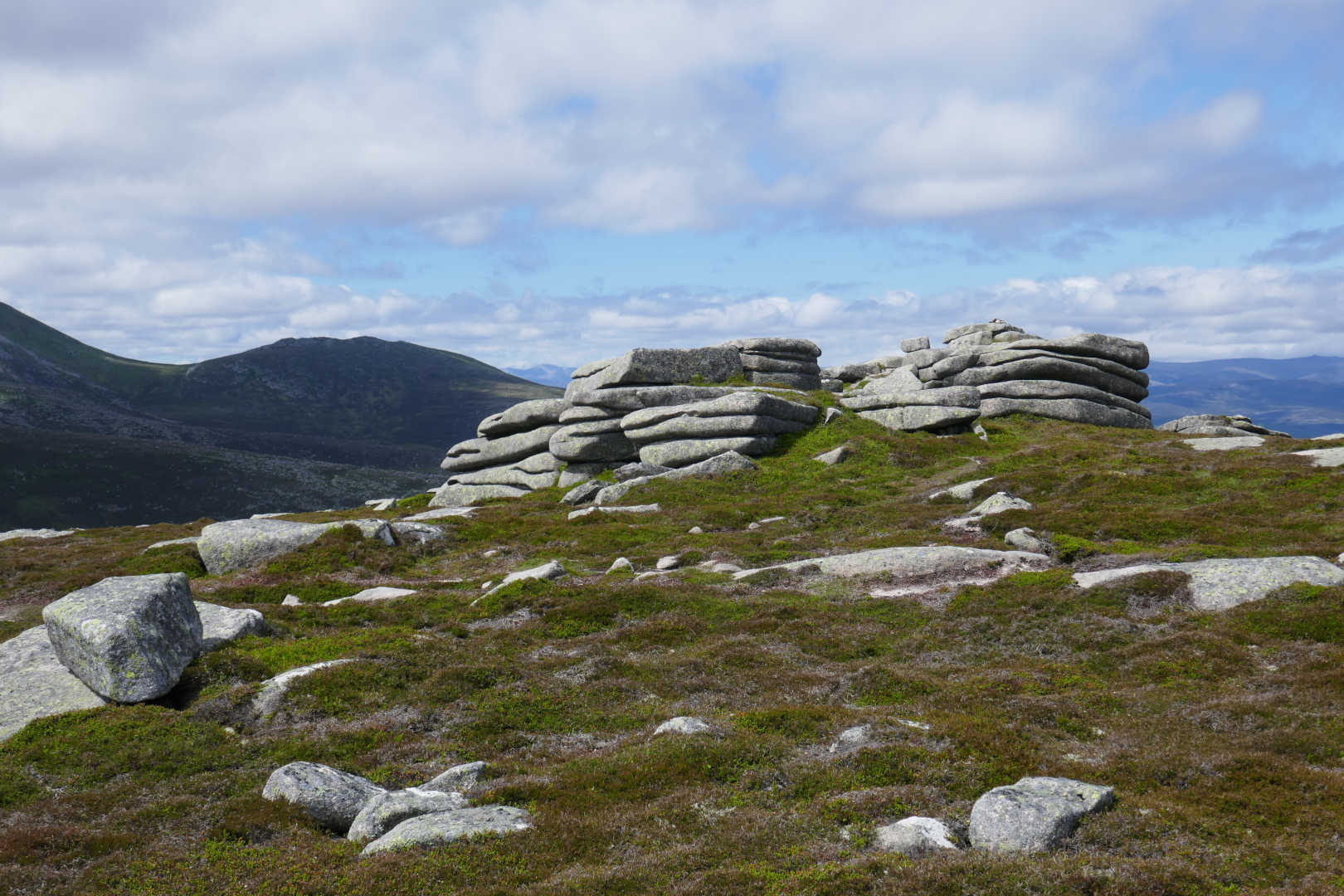 Looking East-ish to Mount Keen. The sky looks miserable but it was about 18C and the sun was breaking through the clouds all the time. I’m quite bronzed up after being outside for so long. 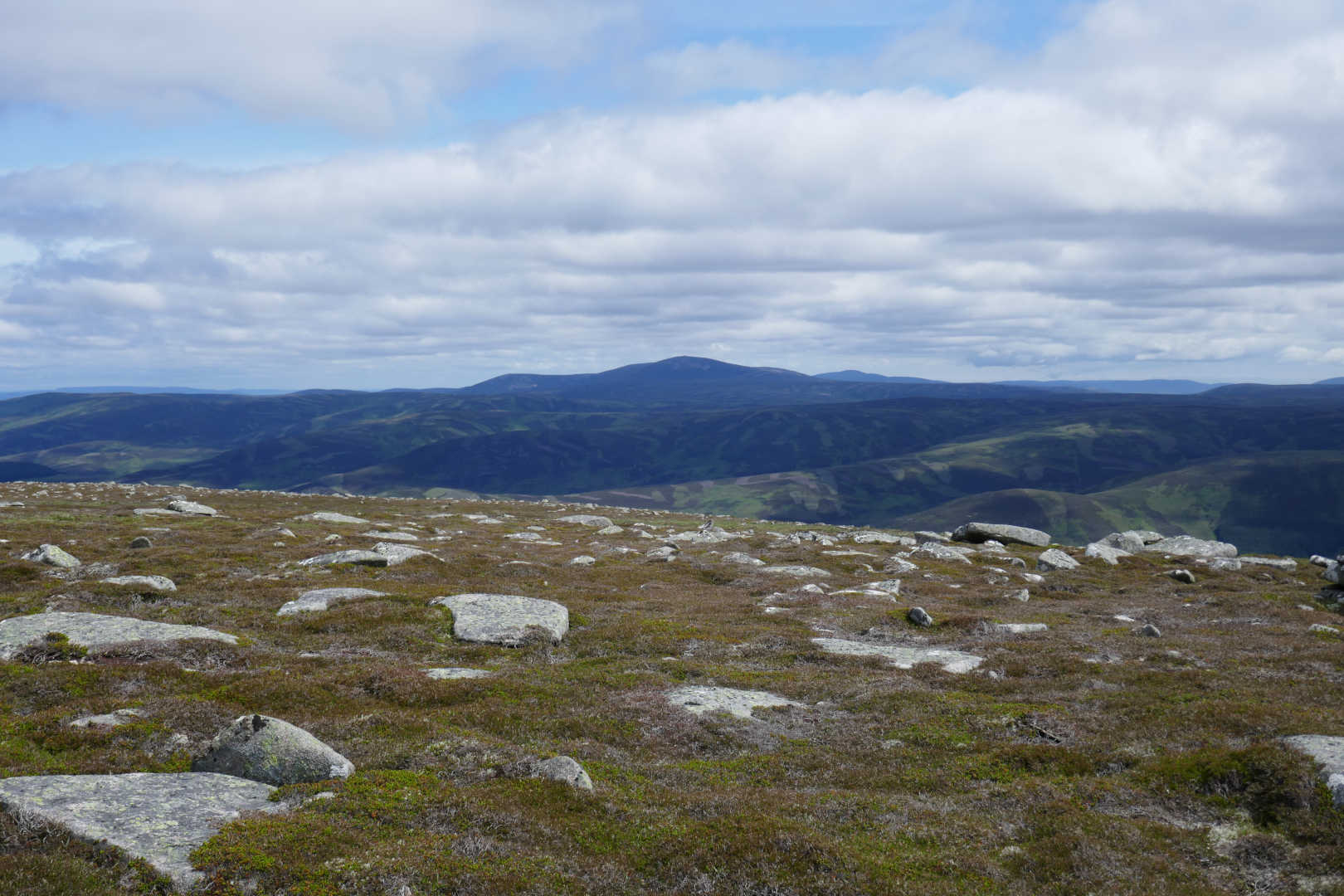 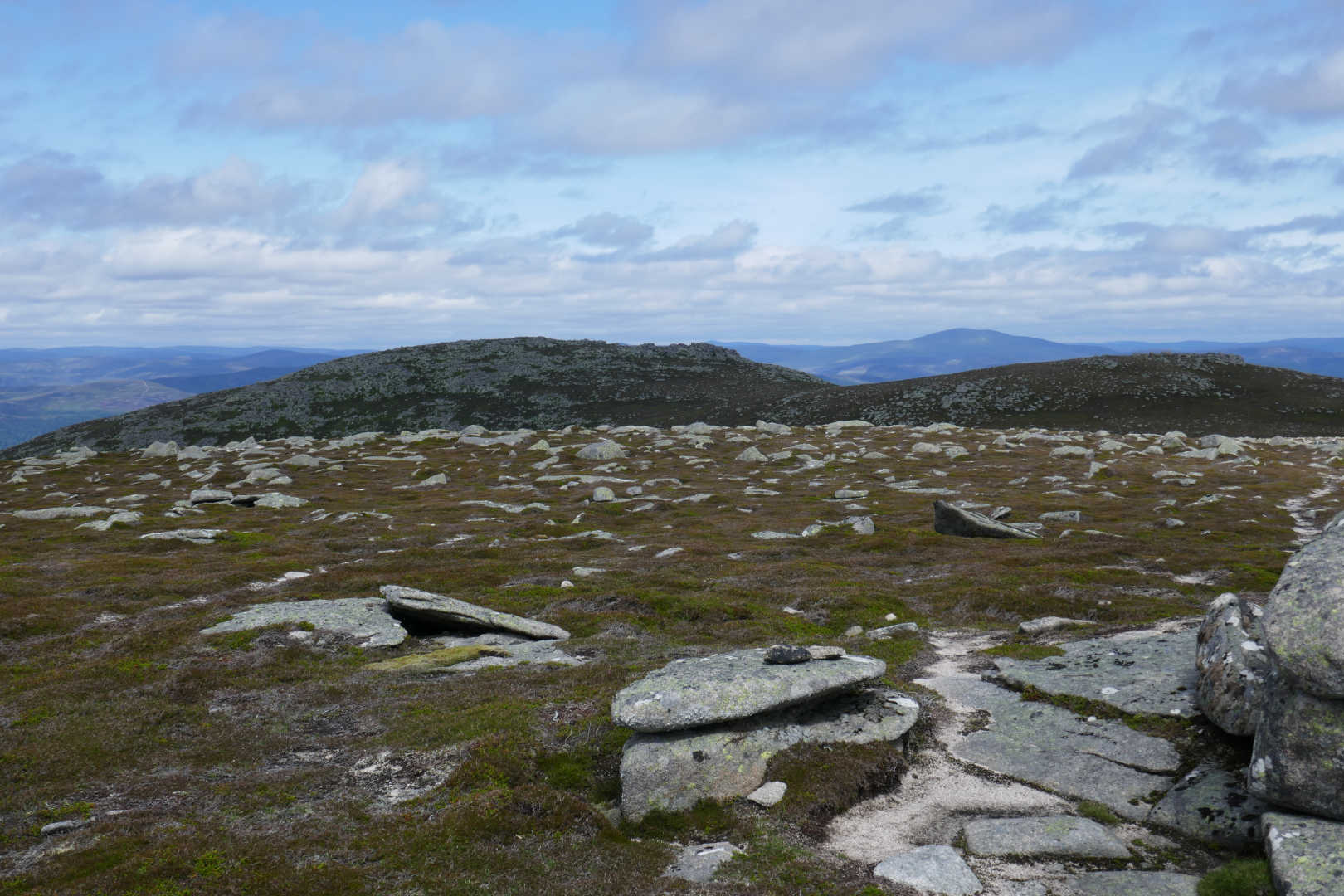 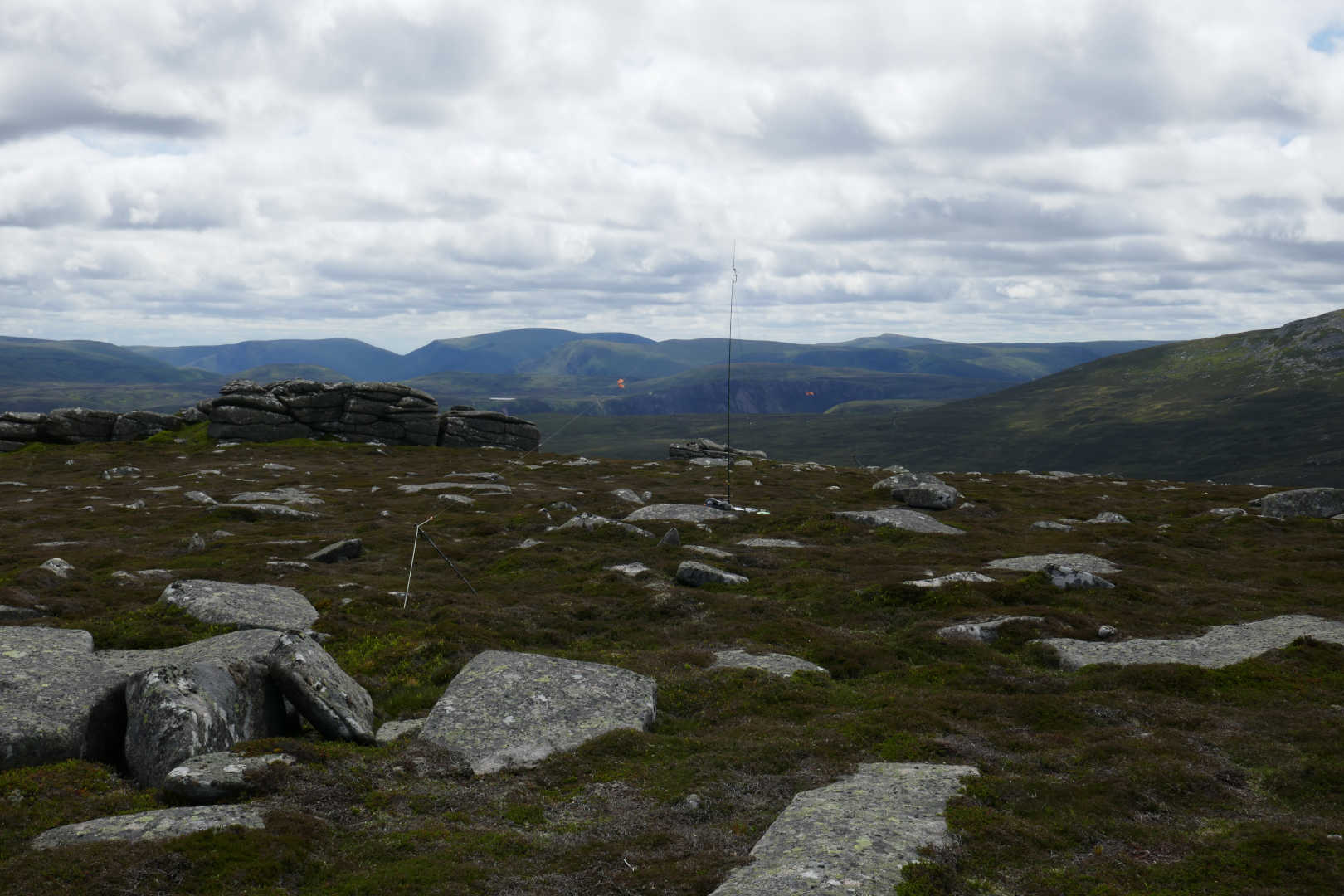 The waymark cairn. You fork left here for Lochnagar tourist path. You turn hard right for the excellent Conachcraig path. Don’t do what I did and decide to cut off the approach and go straight up. Bad, bad move. Added 40mins to the ascent time 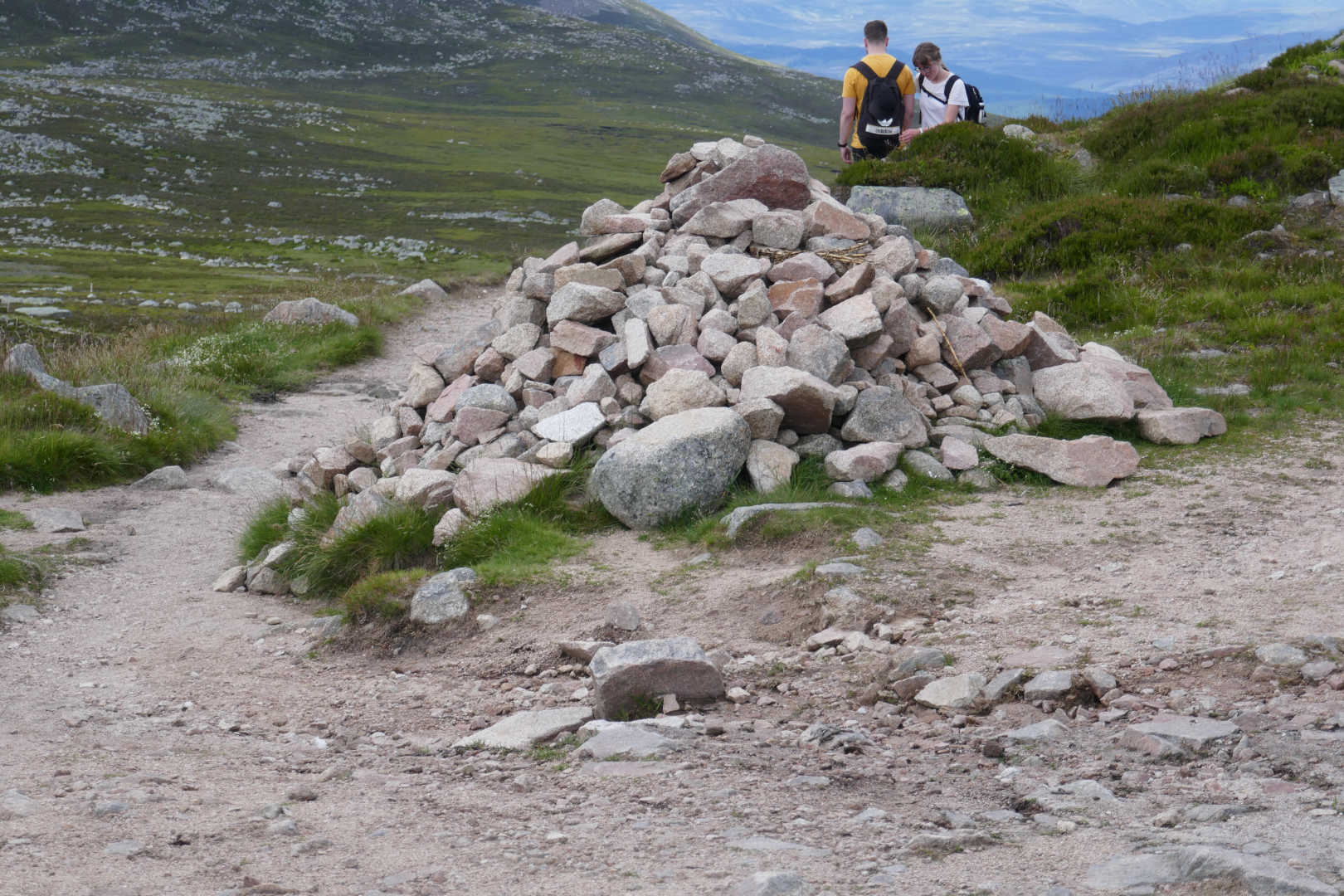 Conachcraig itself. Looks a doodle but that ground is thick, dense Heather, hidden boulders, and it’s steeper than it looks. My 'shortcut was up the right hand skyline. Don’t! Follow the approach path to cairn and take the easy path. 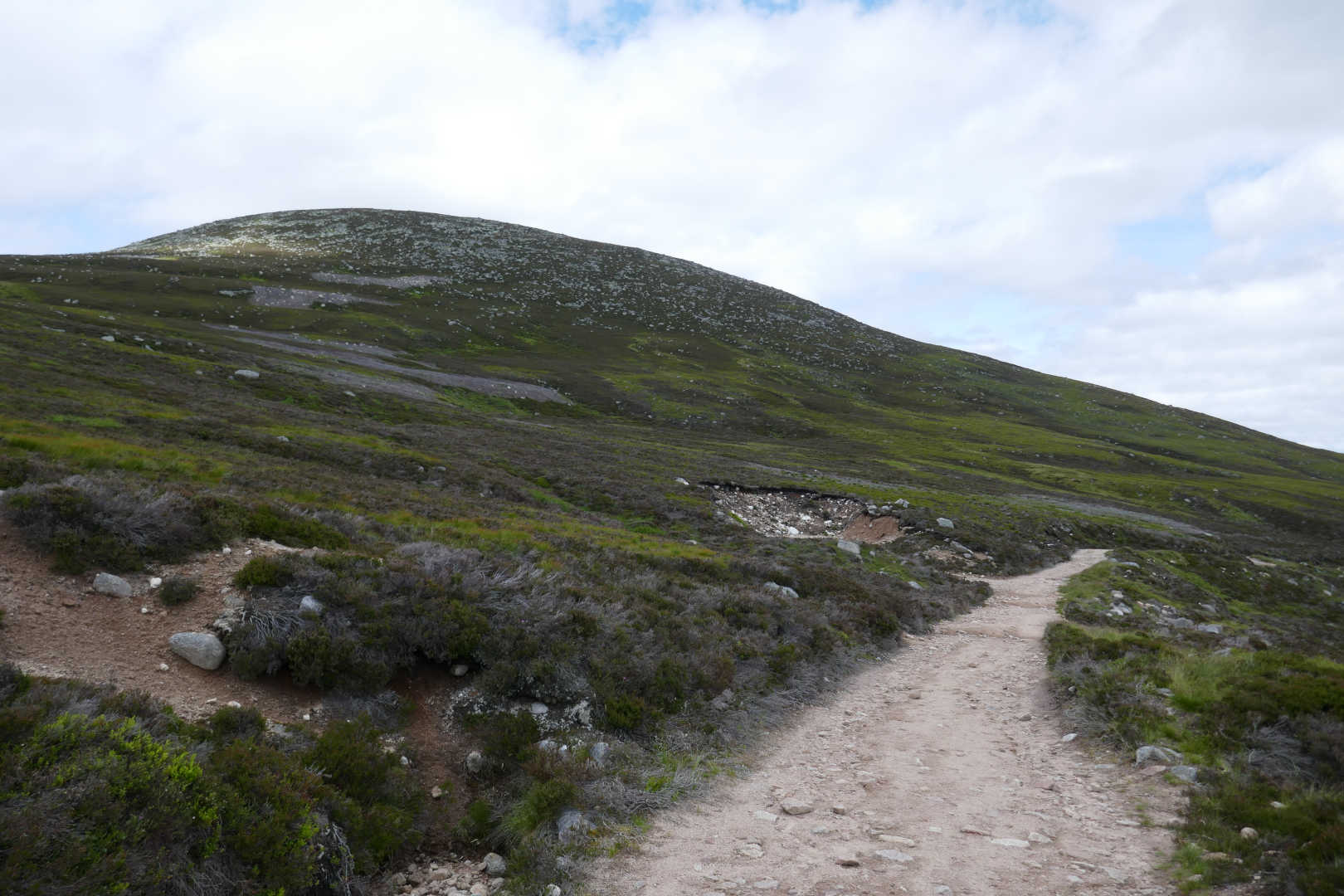 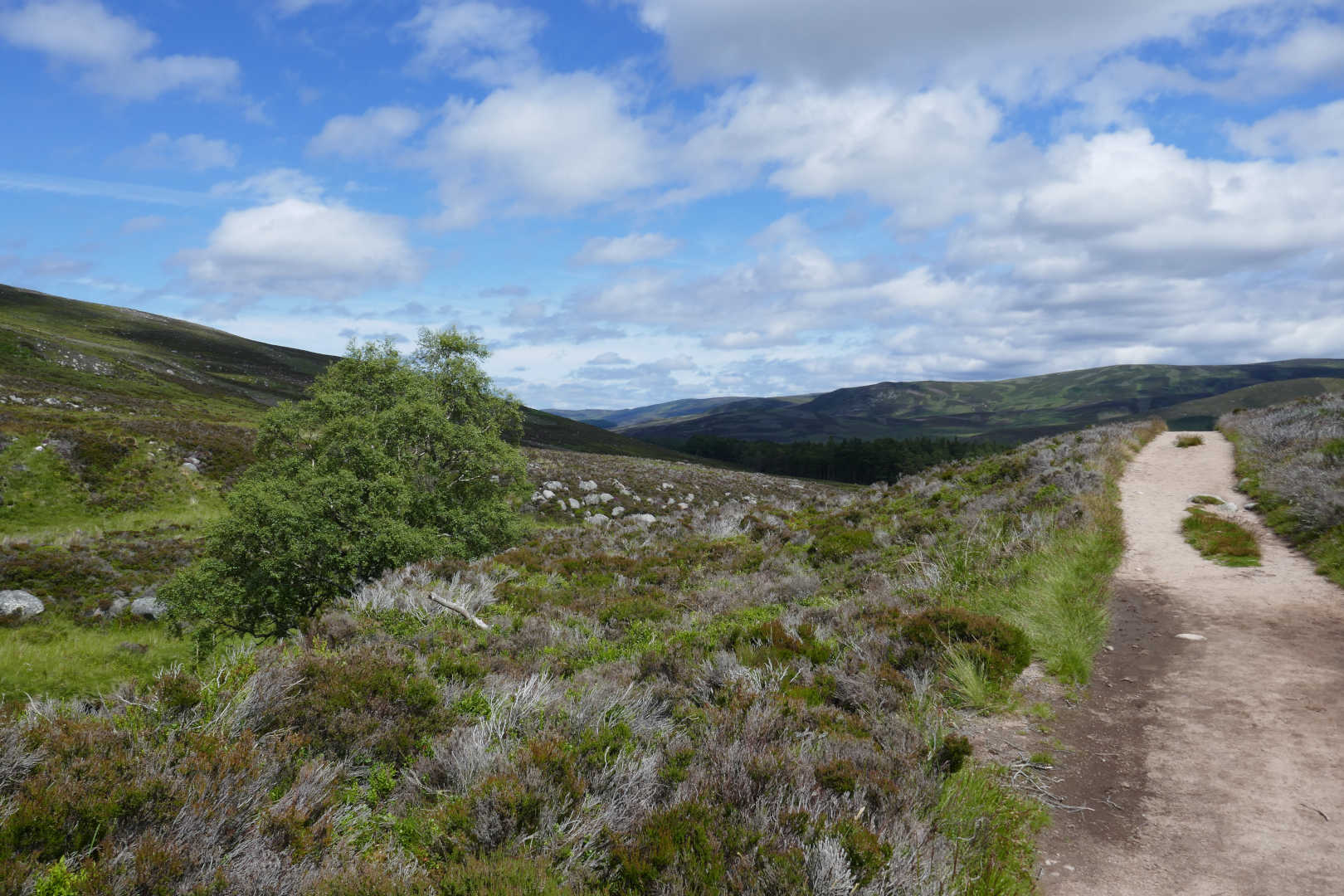 The radio was rubbish. Just 1 on 60m, 8 on 40m SSB, 3 on 40m CW and 8 on 30m CW. Made hard by not being picked up by a skimmer and having to do a faffing dance to get a mobile signal. I was going to do something on the way home but I was hot, my legs were tired, propagation was rubbish. I drove home fast as there was cold beer in the fridge

I was a bit amazed to actually complete with you on 40m as you were the third strongest station in my passband, being just weaker than an idiot droning “(callsign) - contest” with microscopic pauses, and there was a much stronger station just off frequency. My only successful chase all day due to that ruddy contest!

You were a good signal Brian. I forgot the speech processor for the 817 and it makes a huge difference. Also I forgot I was MS0TA and kept spotting myself as MM0FMF which confuses people. But I was heard by a skimmer on 40 and 30. I must get my spotting sorted out, poor showing gettng my own call wrong !

I forgot the speech processor for the 817 and it makes a huge difference.

I must get one! I suppose you could have been naughty and edged up the ALC a bit - with all the crud already polluting the aether nobody would have noticed a little splash from you!

Those granite formations remind me of Cornwall!

I have a DYC-8x7 compressor. It plugs into the mic socket and the mic plugs into it. I bought it as a kit years back at Friedrichshafen. In a perfect world I should have rolled my own including the design. But I’m time poor and (relatively) cash rich. So I’m happy (in reason) to spend money to give me more time to play radio. Works for me, YMMV!

You can get them from Richard at Sotabeams and elsewhere.

Andy, how is the coverage in your region to use APRS2SOTA to spot?

Thanks for the nice report.

I have absolutely no idea and I’m not sure who to ask either.

how is the coverage in your region to use APRS2SOTA to spot?

I think Robin - GM7PKT should have a fairly good handle on this?

It is possibly more interesting to ascend the hill from the other side. Turn right before the buildings (at the lodge) and keep along the track (left fork part way). You come out of the trees through an old gateway and turn left up the hill. Bit rough but very accessible. Come down the track you showed to the Lochnagar path and back to the car park.

I have an aversion to “there and back” routes preferring a circular (or, at worst, a “Q” shaped walk).
Lovely hill though with spectacular views

I think Robin - GM7PKT should have a fairly good handle on this?

Yes you’re right. I do remember discussing APRS with Robin sometime back. Older age is affecting my memory.

If anyone in GM wants to run or add to APRS node then PM me as I have some TNC equipment available for free.

We have many people, even elderly, running an APRS node here in HB9. Well estimated service here.