I am looking to at making another Vert 40m 1/4w on another 8m fibre glass pole Like the first one so got pair and set them up as co phased with the delay loop again both will have 9:1 Ununs.

Now found good page to work out lengths required for the feeder coax,s and the delay loop coax(Phasing line) and the chap whom built his own version

What I don;‘t quite understand what is difference between 71’ phasing line and 71’ phasing at 90’

OK its out of phase of 90’ makes difference to coax lengths fair enough,
But what effect does it have on the antenna system.

Plus could i use RG6 75ohm in the phase loop and the T84’ lines but then RG8 mini from rig to the box of tricks with switches etc.
Whole idea is to use from home, sota and in the field, still being fully portable antennas.

Did start with idea of three el half yagi but distance between the three els is 8.8m each totaling 17.6m at least with this system i can set to how I want to favour one direction and its reverse direction or just go plain side ways and null out other two.

Put ya glasses on Karl 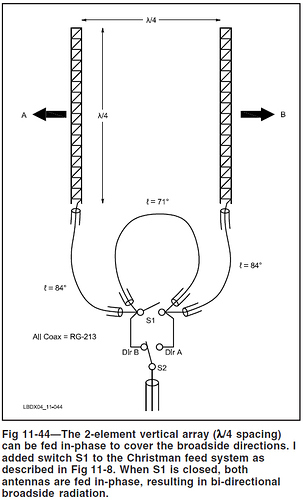 I’ll be interested to hear how it works out in practice.

I used this arrangement on 144MHz years ago as part of a DF system, and it worked well. The two verticals were mounted on a common sheet metal ground plane.

Hi Karl,
This would be an ambitious aerial for activations. At home the aerial has good DX properties but as Adrian mentions it would require many 1/4 wave radials at the base of the verticals to be efficient.

I think the author is saying is that:

I assume allowing for the velocity factor of about 0.66

I assume he has measured a quarter wave (90 degrees) as an open ended coaxial stub using an aerial analyser to occur at 8.886Mhz, then cut it proportionately to get 71degrees at 7.1MHz

I would advise against using any cable other than 50 Ohm cable for which the velocity factor is known. Using 75 Ohm cable for the phasing loop will introduce an impedance conversion.

At up to 100Watts as activator, RG174 would carry the power and the losses at 40m will be minimal. For lower loss RG58 would be the choice.

I suppose there are two different jobs - operating from home and /P.

Why not keep things simple for /P and play around at home with 4SQ and other stuff?

Anyway good luck with the experiments

Now off to take Bertie the greyhound for a walk.

One of the VK folk has used a similar antenna for 20 metres on activations, mainly to get a bit of gain in Europe’s or North America’s direction.

Why not keep things simple for /P

That is precisely the right way to go about things. The more complex the system, the more there is to go wrong. Mind you, when I eventually retire and can afford to hire a band of sherpas, I’ll start using rhombics on my activations. More poles to break!

It will be interesting to see how your antenna works out Karl. Unfortunately, along with many others, I don’t have the real estate to put anything so grand.

Here’s Bob (VK5FO)'s blog on what he does with phased verticals on SOTA summits.

I can vouch for the effectiveness he puts out a good strong signal via Long path from Mount Gawler!

I once setup a pair of 20m phased verticals for an activation.
Was it worth it?
Well, I didn’t have anymore contacts than usual, it was a lot of faffing around, and it didn’t really make the operation any more pleasant

This was on a virtually “drive on” summit. I wouldn’t dream of trying it where there is a proper walk and ascent.
I would consider it a viable tool to use one on the higher bands, if I was perhaps specifically chasing e.g. VK land.

40m also seems like a strange choice. The single skip countries, where the majority of chasers reside, are all easily reached with a low dipole.
The only reason I’d use a phased vertical array on 40m would be to fire Stateside or Asia. Both these require activating in the dark, either at night or early morning. It’s not my best time of the day

Good luck with your experiments
73
Pete

If your thinking in terms of added dB’s a license “upgrade” and a linear would do more for the pleasure. Phasing is tricky even for people that have the right equipment and a clear understanding of transmission lines, you also need CLEAR real estate if a metal shed, washing line, other antennas w/e is in the way it will change the antenna(s) lobe pattern for sure.

Personally I just wish the Sun would do the right thing at the moment. A 1/4L vert antenna works wonders up there.

Right peoples thank you for the food for thought.

Thinks going to have bit more of a think on this one but any more thoughts be most well come.

Thanks again one and all

Must stop this brain storming it hurts

Your current setup seems to be working well for you, another option could be to get your intermediate licence before Christmas an extra 40w for the price of a book, a small project and an exam fee.

73 and good luck with the project
Graeme

Must break out the book more already, got one and study more. Do like the idea of co phased verts and the art of antenna building. But end of day its taught me how and why co phased antennas work and how to make it work. And another project to play with at a future date so presently i have learnt a little more. But it does make me tick thinking about antennas and making them work and the art of building them.

If your thinking in terms of added dB’s a license “upgrade” and a linear would do more for the pleasure.

But the added dBs of a license “upgrade” and a linear will be of absolutely no use when listening for activators. A good antenna gives you gain in both RX and TX. Quite a large number of activators do not use more than 10 W. So receiving their weak signals is the major task. In the 26 QSOs I had with Karl we often exchanged quite similar reports. On my activations I run 5 to 10 W and a 1/4 lambda vertical on 40m and a 1/2 lambda vertical on 20m.
@2E0FEH Would be quite interesting how often I failed to copy your signal but you could read me.

Of course one may not be the first station of the chaser pileup being picked out running around 10W. But with some patience and some operating skills one can still work the activator.

Whether Karl will really succeed with the phased array is a different question. At least he will gain some knowledge.

@2E0FEH
I do not understand the 1:9 unun at the feeding point of a 1/4 lamda vertical. The antenna is quite near to 50 Ohms so no need for impedance transformation.

Just go for a very simple, small and lightweight antenna for /P Karl. Even these easily outperform more elaborate home antennas when out on a low QRN environment with take-off like a SOTA summit - and with QRP too.

The point Michael is that there is little point investing time and effort into a tricky antenna system when a simple exam would give you more opportunity and you will LEARN more in the end. Receiving the DX is not usually the problem if you have a reasonable station to start with in my experience. On a summit keeping it simple is definitely the way to go.
A phased vertical array with a fixed delay line will give you limited directional gain which in practice will probably hinder your receive ability rather then improve it over say a reference antenna such as a dipole.

Give it a try Karl, its only wire at the end of the day.