Decisions, decisions, decisions. The WX has now been marvellous for weeks and weeks. Blue sun and quite warm in the day, not much wind and cold at night. The snows are melting but not that quickly. Where to go? Well I fanciend Beinn Trilleachan GM/WS-155 but it’s at the end of Glen Etive so it’s a long drive but the WX would be fabulous. And everyone else will think the same. It will be a nightmare to park and it’s a 3hr drive and also the clocks change so I loose an hour’s sleep. Effectively I’d be getting at 5.00am for this with no guarantee of parking. I’ll wait till the WX is good midweek before the bracken grows and the midgies come! We need somewhere high enough as the WX is good… Drumochter has plenty of SOTA summits and it’s a while since I did Carn na Caim. That will do it’s an easy drive too.

Out of the house at 7.45 (6.45) and I was pulling into Layby 87 just South of Dalwhinnie at 9.30. After wasting time talking to people I was booted and starting the walk at 1000BST. Carefully cross the A9 and under the new Pylons and up the track. After 20mins it was too hot to walk in a fleece so of it came and some photos taken. 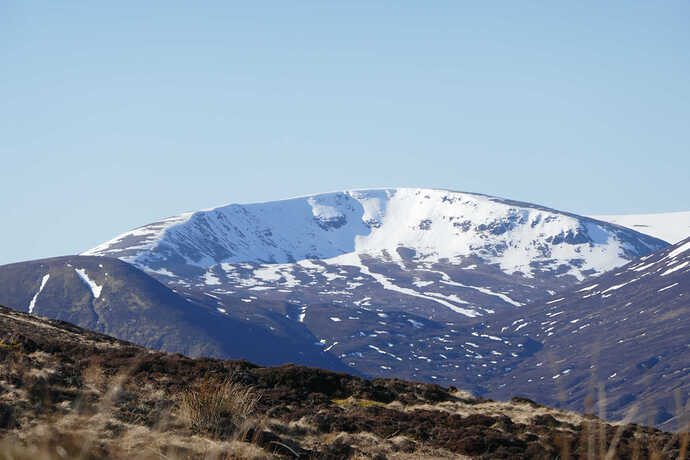 A’ Mharconaich (A Munro but not a SOTA summit) 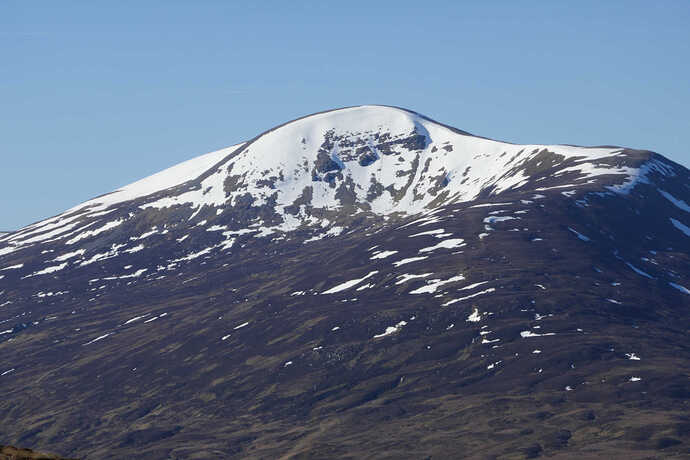 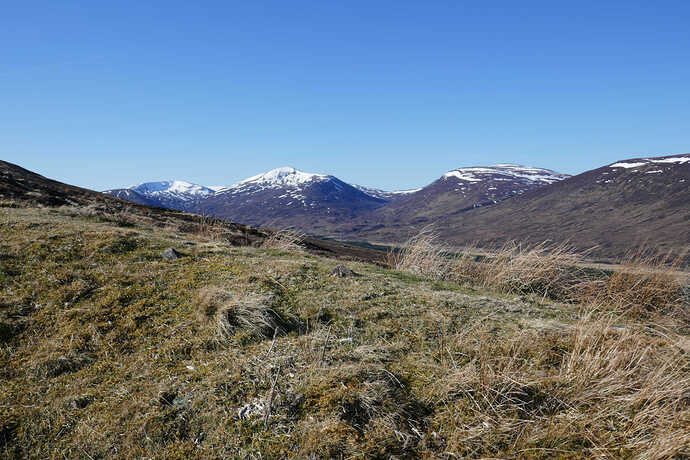 The track is good but hard on the feet, you gain height quickly. Looking NE out back Dalwhinnie. 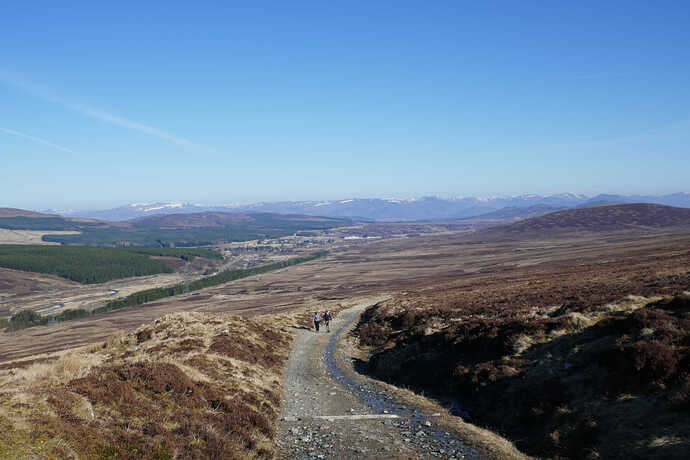 The track gets steeper but you just press on. And on. Snow patches at 600m. And when you think that must be it you get to the top of the track. Left for Carn na Caim and right for the Munro A’Bhuidheanach Mhor, another Munro that is not a SOTA summit.

I’ve done this before and had forgotten that about 1hr10mins to the top of the climb then another 45-55mins across the featureless moor to the summit. How featureless, well this is about 1/3rd of the way from the path looking to the summit. There’s worn track but even with the fence posts, not an easy navigation in mist. 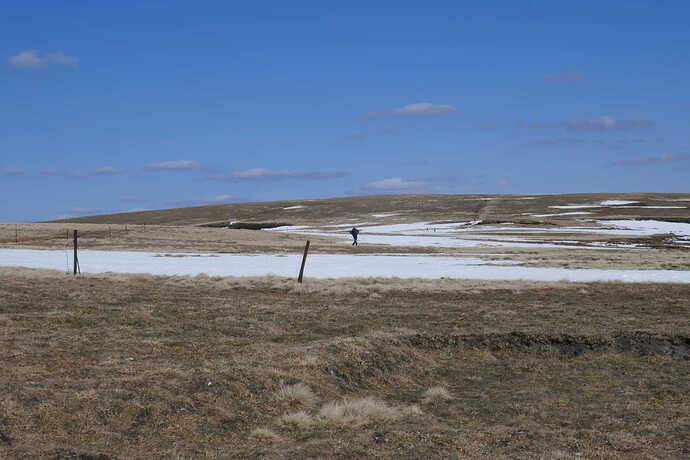 As in the last photo there were plenty of significant snow patches. No need for crampons or ice axe, you cannot fall of this hill which is good But the snow was starting to lose its consolidated status, the top 4cms was squishy and then maybe it would support my vast weight. Or not and I’d break through up to 20-30cms deep

It made crossing the patches slow. Also having lost a lens from my sunglasses I couldn’t see a thing due to the glare. New sunglasses needed.

Finally after 50mins I was at the cairn and whilst it’s a big featureless plateau, the walk is worthwhile.

North. The big hill without snow left of centre is Meall Chuaich GM/CS-035

On to the air and oh yes, big SSB contest. I had the 12/10m antennas but rigged for 30m first, a quick tune showed plenty of SSB contest stations on 10m. At this point I should have dropped the 30m antenna and played on 12/10m but I did 30m. When I came to try 12/10m later there was nothing but some weaking FT8. Bottoms!

I made sure the dipole was pointing the right way but there wasn’t much happening. It was all a bit rubbish though there had been a CME the day before. Just 10 stations worked and a few were rough sounding. Deutschewetterdienst on 10.1008 wasn’t as loud as it usually is. Hrrmph. Onto the 20m and 12 worked on CW. No F5JKK but he was having a nice lunch before he went activating. So we missed each other for an S2S. I tried 12m and the band was noisy and lacking propagation. Back on to 17m and only 2 stations worked on CW. I could hear a few weak SSB stations. Also both bands were noisy and signals had rapid QSB.

OK, it was a 2+hr walk in so that’s 1.5hrs walk out, 2hr drive and after chatting to some walkers it was time to go. One walker was very interested and asked sensible questions and we had a chat about radio and the hills in general. I’ve done lots of easy hill walking and many of you will know that you get connection with some fellow walkers that they “get it” when it comes to being in the hills. This guy did.

Now one of the visual treats around here is Ben Alder GM/WS-009. He’s huge and has a big companion Beinn Bheoil GM/WS-047. Sadly in this picture Beinn Bheoil is in front to the left of Ben Alder and you cannot really separate the two of them. But hey, it’s not a view you would tire of! 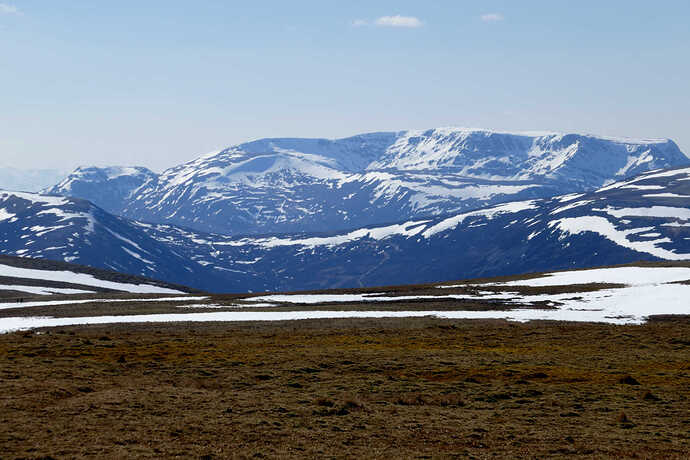 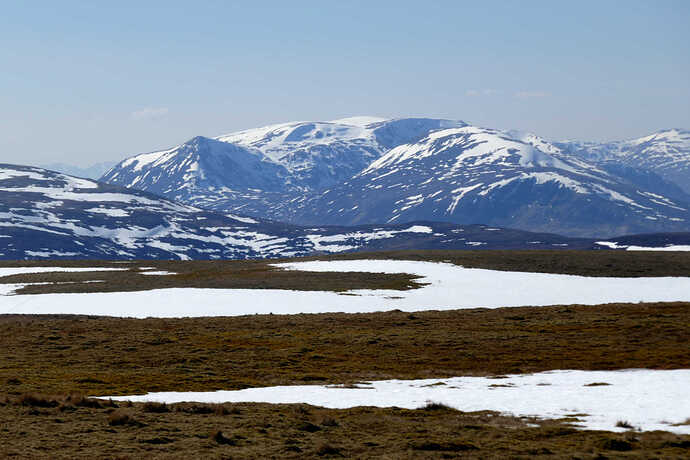 Middle distance right of centre is Beinn a’Chlachair GM/WS-023 with assorted delights in the centre far distance such as Stob Coire Easain GM/WS-015 and the hills around Loch Treig. Finally the hill in foreground and right is The Fara GM/WS-106 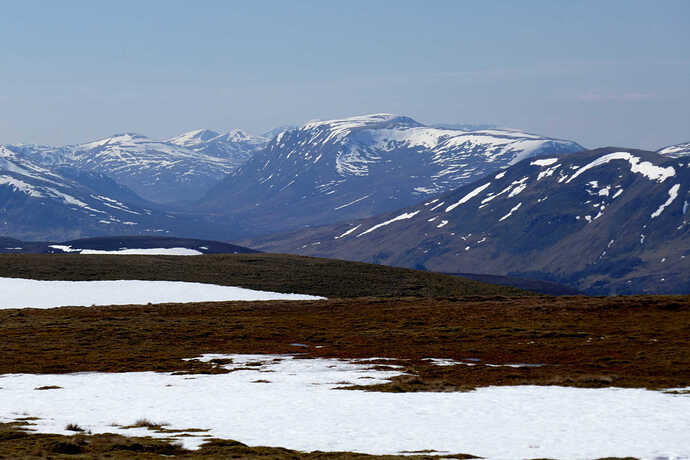 Another view of The Fara GM/WS-106, a wonderful hill and well worth doing. 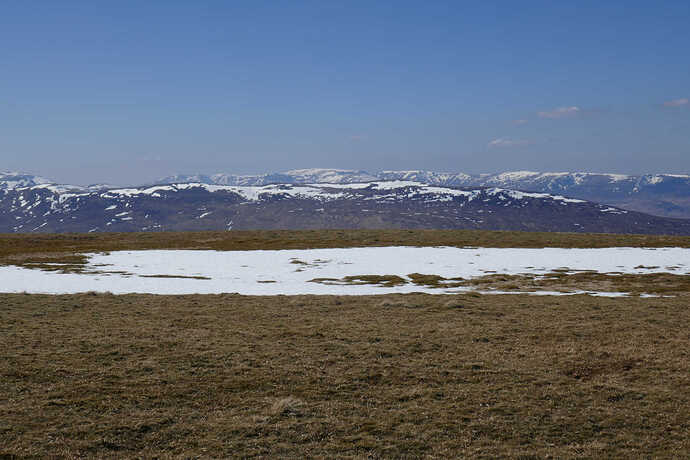 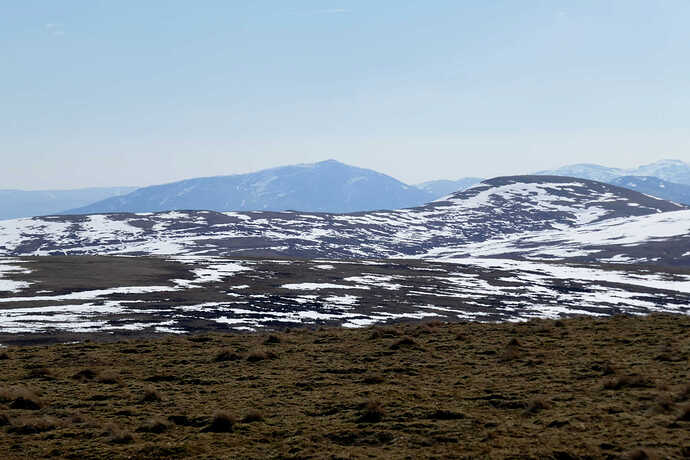 Looking NE towards The Cairngorms 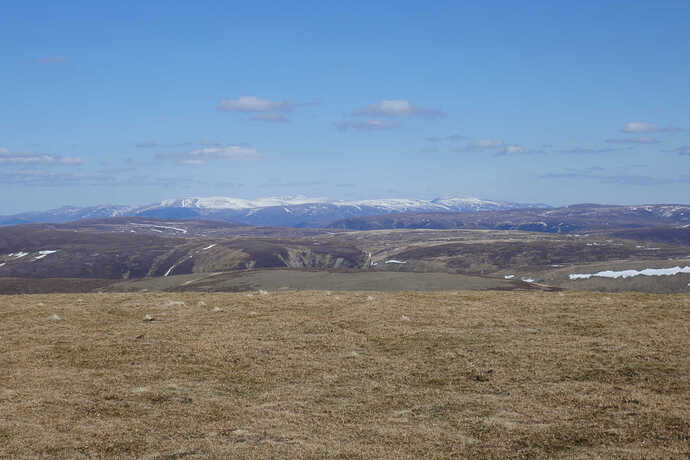 It was so warm that after a few minutes at the summit I didn’t need a jacket or fleece. Plenty of thermals around as there were 3 paragliders in the area. 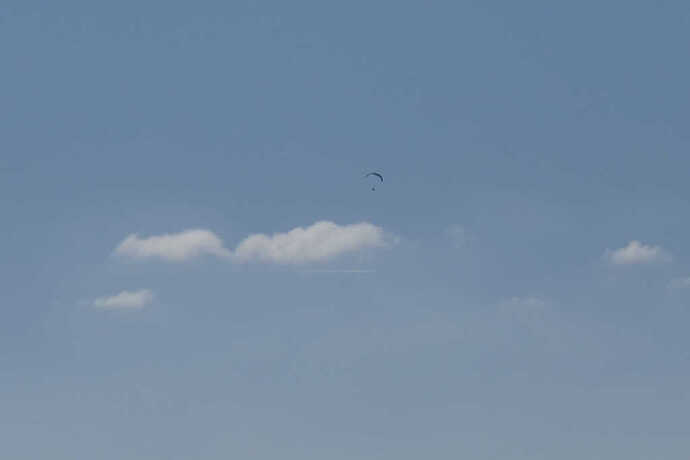 I could look at Ben Alder and friends all day every day. 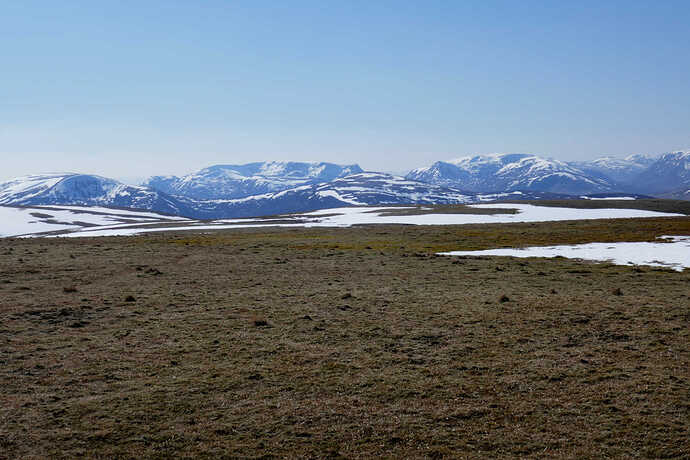 Some quite deep drifts still seen on the way back. 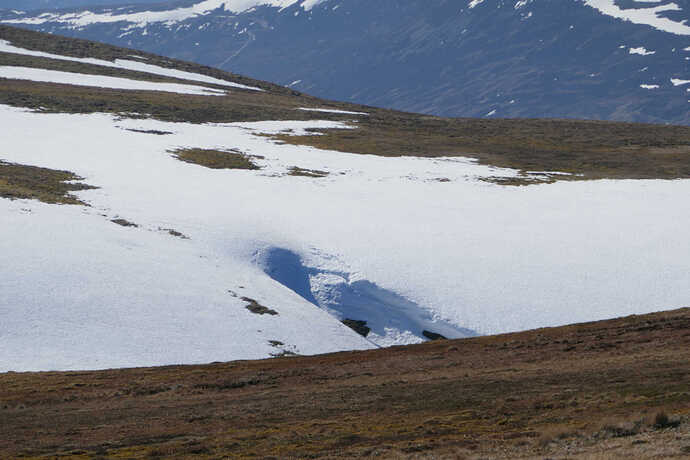 On the way back it seemed a bit less hazy, again here is Stob Coire Easain GM/WS-015 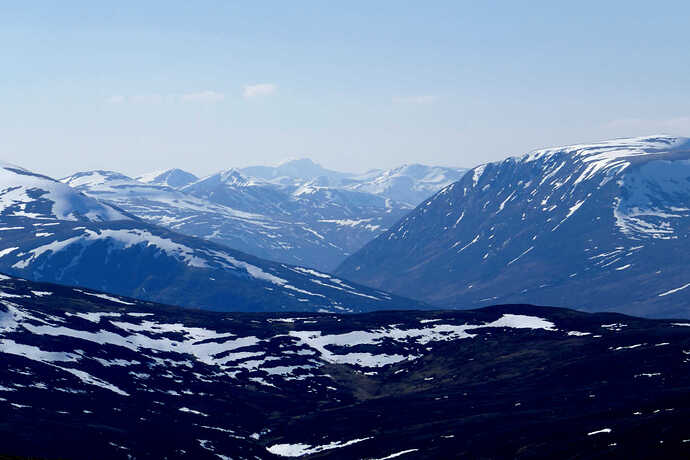 Finally a view of one route up/down The Fara GM/WS-106. I have always done by the ridge on the right down to the farm and then the quarry. But you can walk from Dalwhinnie and along Loch Ericht and then use this huge firebreak to get past the trees. But it’s a good thigh buster up or down. You have been warned! 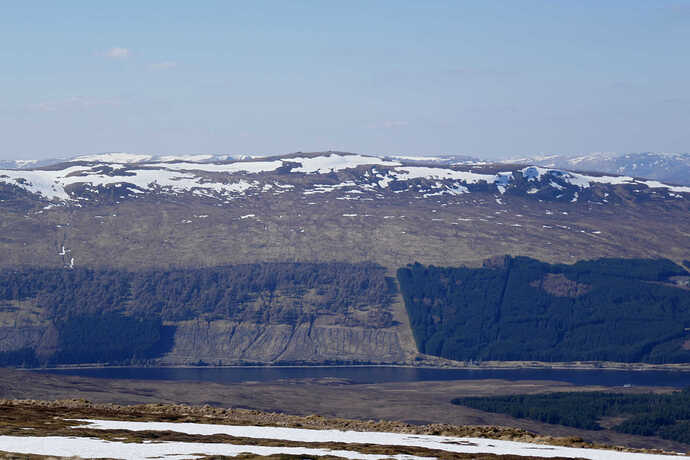 Back was the reverse of the route up. Down at the car I was just sitting down when I got a text… “was that you on the A9?” It was from my work colleague who took early retirement and I had bumped into on Schiehallion. He was driving back from a long weekend in The Cairngorms and drove past just as I was crossing the main road. That’s twice we have bumped into each other when in the mountains!

Back at the car, at 1610BST the temperature was 15.5C at 430m ASL on March 27th. That is as hot as many summer days in Scotland. Complete madness. A damn fine day even if the radio was a bit rubbish. A not too demanding walk however.

I don’t know how popular they are nowadays, but in my heyday parking for Beinn Trilleachan would be iffy even in midweek in fine wx because of climbers there to tiptoe up the huge Trilleachan slabs. Up to 300+ metres of smooth slabs with awkward overlaps, notable for making you feel like a bug on an elephants derriere!

Exactly Brian. I will need the right WX, right time of year and an early start. It would have been just the wrong side of fun to get up early and lose an hour for the clocks as well. I can imagine it would have been impossible in Glen Etive. What’s made things worse was that scene in the James Bond film Skyfall filmed in Glen Etive as not only are there normal tourists plus hill climbers but grockles wanting to recreate the scene themselves.

And for those who wonder what the slabs are… 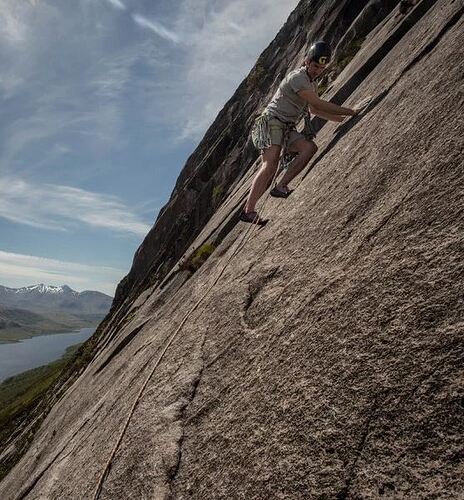 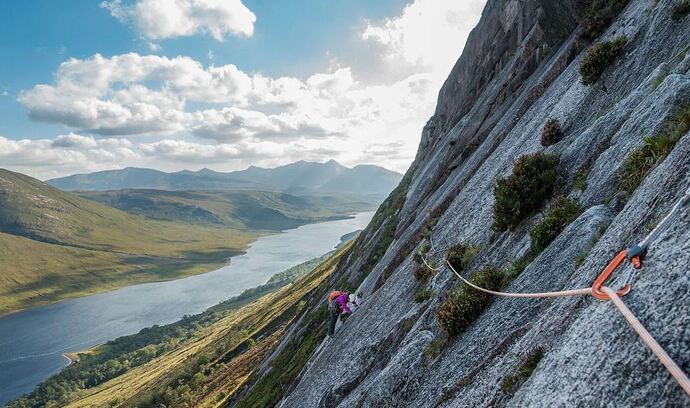 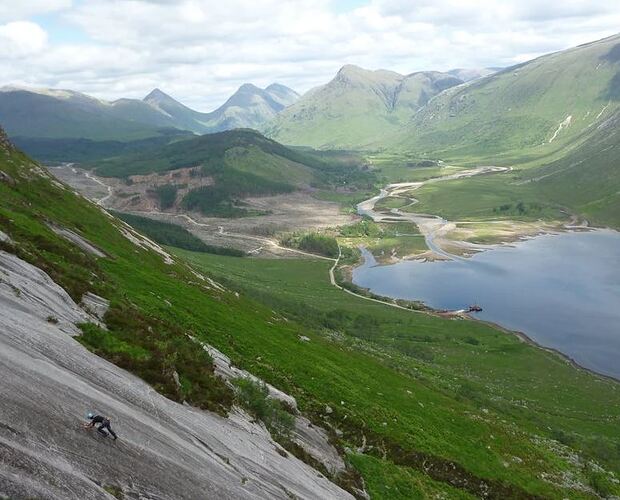 What lovely photos! I’m not sure, but I think the middle slab shot may be “The Long Walk”, 1400 feet in old money. You see what I mean about a bug on an elephants backside!

Great photos Andy,
Reminds me of time past. I mostly content myself these days with the “pools and the plains” in LD land.
Thank you
Regards
David
G0EVV