This was the summit I’d identified for the EU<>NA S2S event. Several reasons made it the obvious choice. It was close to where I was staying, unlike many summits here, there were marked footpaths on both OSM and official maps, it wasn’t too far from the “off-piste” parts to the track which enabled me to stay longer when the light was fading.

I parked at the North end of the small town of Lajares at the start of the aptly name Camino Calderas. There’s a small car park as this is a poular tourist attraction. There’s a sign saying “Camel Parking” but I didn’t see any camels parked there!

Actually there used to be camel rides starting here but it doesn’t look like there have been any camels for years. I applied more sunscreen, drank some water, ate two apples and checked the gear and was off. The car was telling me it was 26C but the breeze made it feel cooler than that. The car was an almost new Opel Corsa with 1230kms on the clock. Now last year we had a Toyota Yarris, a car so wonderfully underpowered I didn’t think I would find anything with less ability to loosen greasy sticks from dog’s nether regions. But I was wrong. Perhaps it was because it was new but this Corsa was woefully gutless. Even when you revved the nads off it, it barely moved and Mrs. FMF found my overtaking maneuvers “thrilling”. I think she found them so because she screamed a lot whenever I overtook anyone! Anyway this car was not up to pulling greasy sticks out of tins of grease never mind dog’s doodahs.

I was looking forward to this activation as the main event should be getting underway when I got to the top. To wet my appetite, the neighbouring lump and the path to the summit looked great in the afternoon sun. It didn’t look much of a challenge! 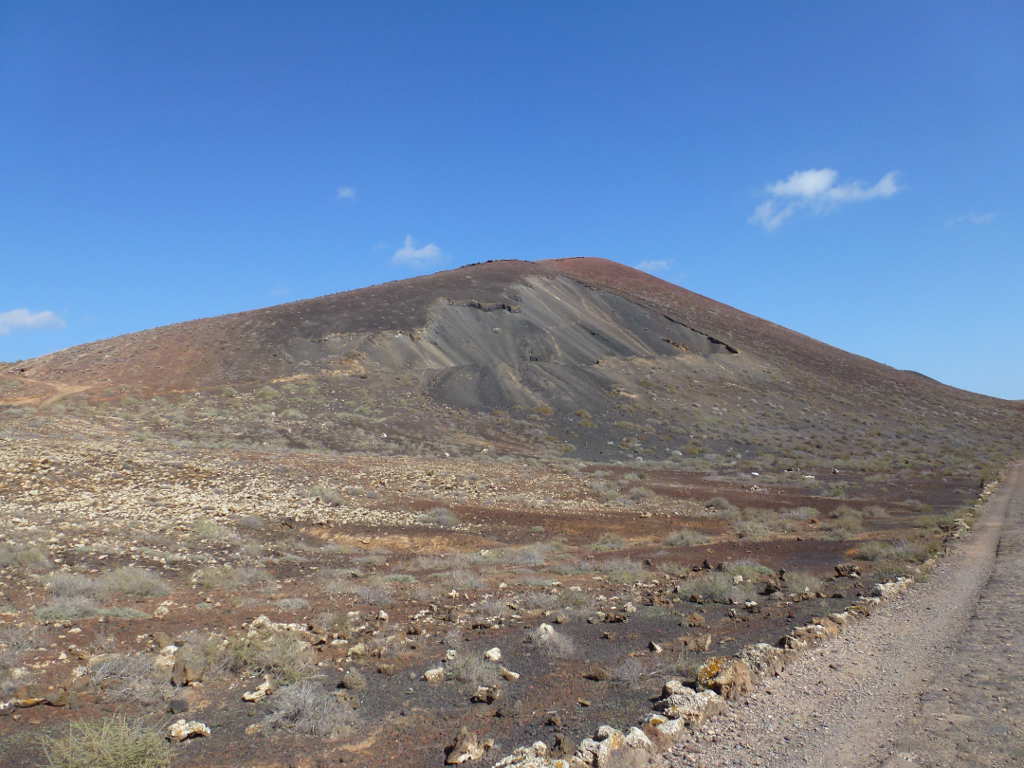 This was taken from where the path splits, you can go left and climb up the hill in shot, drop a bit then up the steep front of the main summit. Or follow the gentle main path around to the back of the summit and the lowest part of the caldera rim. That was the way I went. There is an absolutely spanking path all the way around and then there are steps upto a viewing platform. You can look into the caldera proper from here. This was the first time I’d seen any Canarian volcano caldera that hadn’t collapsed at one side.

Looking down into the depths… 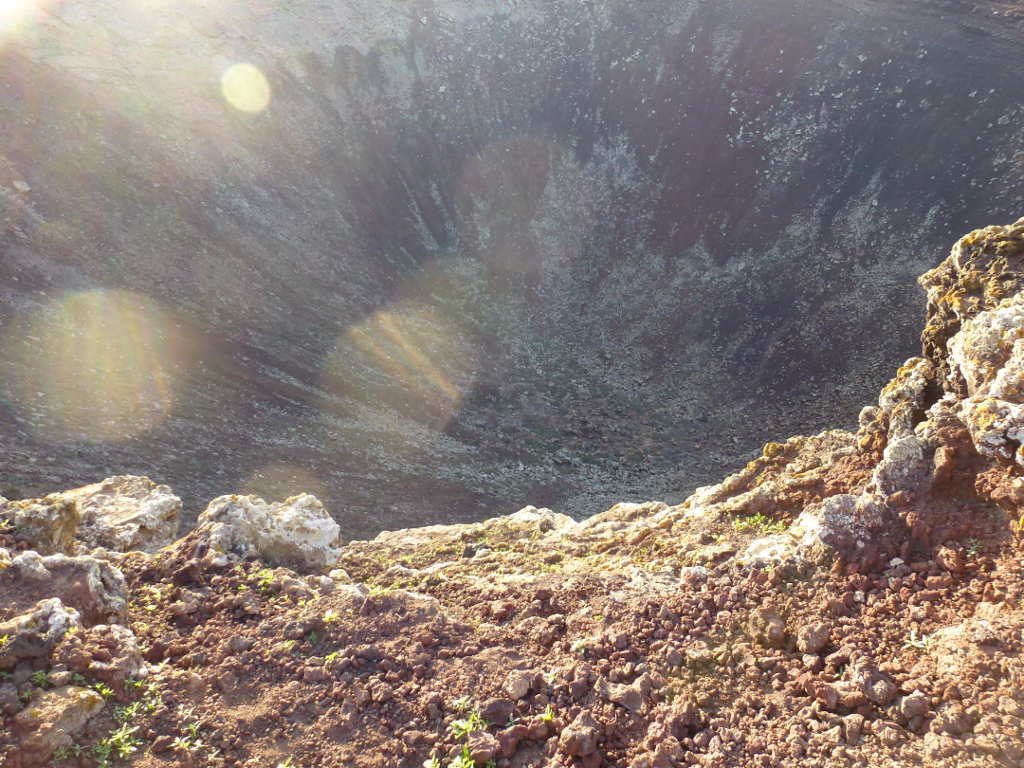 There was an obvious path that ran either way around the rim to the top which was diametrically opposite the viewing platform. It was a little scrambly in places. I had to use my hands to hold on and clamber about in a few places, but most of the way it was trivial and it only took about 5-10mins to get to the top. Here the caldera rim was massively thick, but most of the way there it was quite narrow on the top. This can be seen in the photo of the antenna. 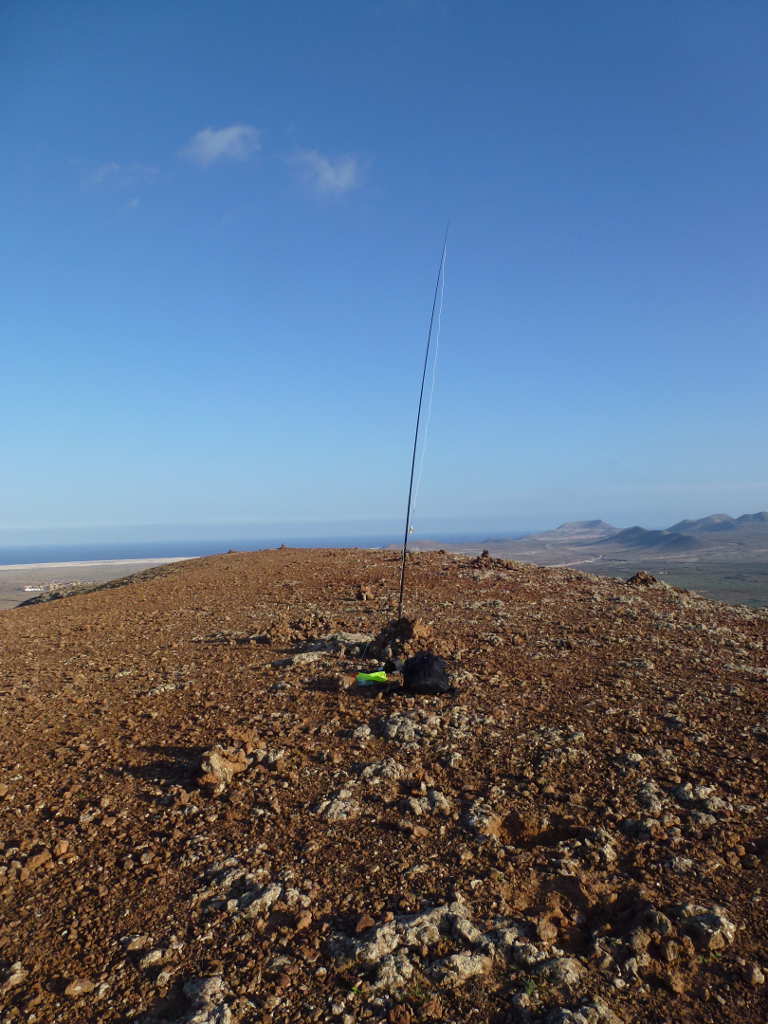 There were plenty of cairns at the top and I re-purposed 2 of them. One was to support the antenna pole the other supported the 1m high tent pole that holds my elavated radial off the ground. To be honest, I could probably have laid it on the lava and it would have worked fine business, but I knew from activating EA8/LA and CT3 how to set up the antenna so it worked. The only downside was the cairn supporting the small pole needed rebuilding when I altered the radial length to change bands. By the end of the activation I had 3 small cairns at the 20m, 17m and 15m positions. I also had end stop phone coverage so access SOTAwatch was no problem allowing me to see who was on a summit.

I started on 20m CW and worked EU chasers no problem and an easy S2S into OH with OH9XX on OH/JS-067. That was a nice S2S to start with as I don’t hear OH activations often though I have plenty of chases by OH9XX who is normally and stonking signal. I then spotted on SOTAwatch that Ed DD5LP was on 15m so I tried as quick as possible to tune there which involved building a new cairn to support the radial pole. Anyway Ed was an easy S2S QSO on 15m SSB. I was ever so pleased to be able to offer Ed an S2S into Africa as I know he’d made some efforts to get new antennas made and was sat in less than ideal WX, Me I was sat in the afternoon sun having a bloody marvelous time! I continued on 15m CW and picked QSOs with N4EX, VE2JCW to the West and 9A7W and S52CU to the East. After that 17m called. This was the money band as not only where European signals good but I worked N1EU and WA7JTM S2S contacts. I heard this weak ???TM being sent many times but it was just too weak to really pick up. Then suddenly WA7JTM was quite clear and loud. Now I know that just 'coz there’s a 7 in the call doesn’t mean it’s W7 call area. But in this case when I heard the summit ref come back my grin became immense. Arizona to Fuerteventura, QRP to QRP small antenna to small antenna. That was a super pleasing QSO. Worth of a commemorative photograph… 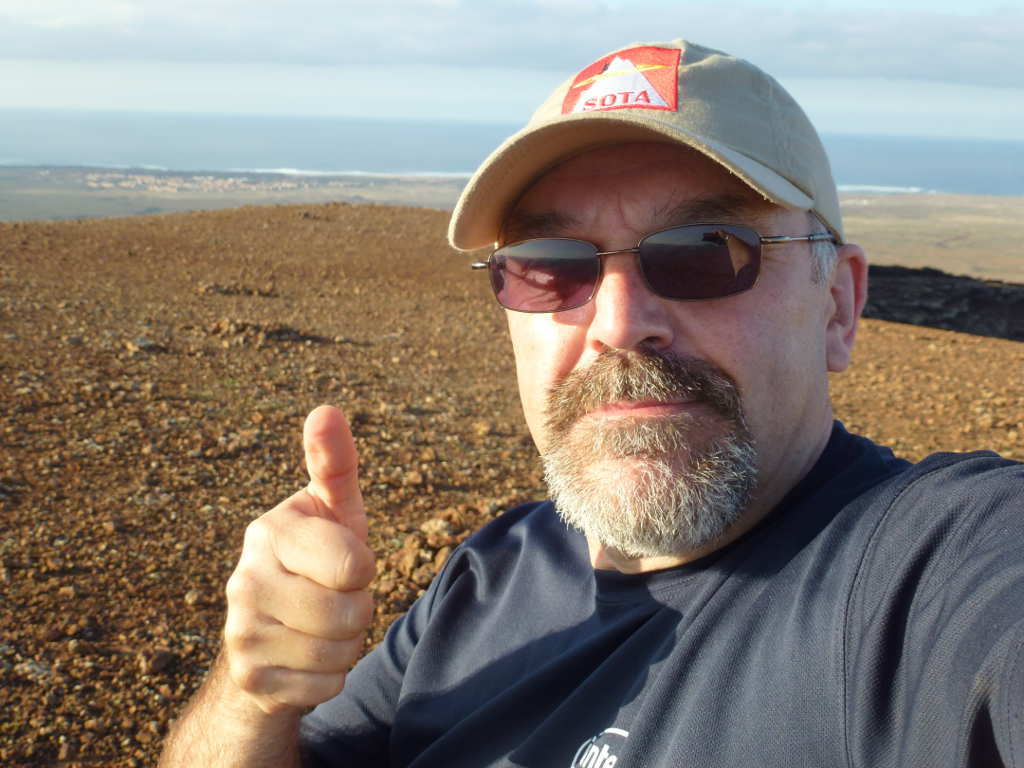 I saw Tom M1EYP spotted on 20m SSB so moved to the original cairn position. I can’t remember when I put the PA into use. Probably when I QSY’d back to 20m. I had NA S2S contacts in the log so I was happy to thrash the batteries as every QSO now was a bonus. Running 20W made me a good signal with Tom and Simon GW4TJC was waiting to ask me to QSY up 5 as soon as I finished. I then I had a nice steady run of chasers and EU S2S QSOs to finish off my activation. Unlike most in EU, I had 2 hours more daylight than them so I stayed until I’d called CQ for a few minutes for no more QSOs. I had once last scavange for S2S stations and called it a day. I got the station down and took so more photos and walked back to the world’s most gutless car. Actually I floated back to the car as I was pleased with being some nice DX for everyone and working some good QSOs myself.

Here’s my morning summit, Montana Roja EA8/FU-039 from the top of Calderon Hondo. My path to the top can be seen on the left side caldera rim. 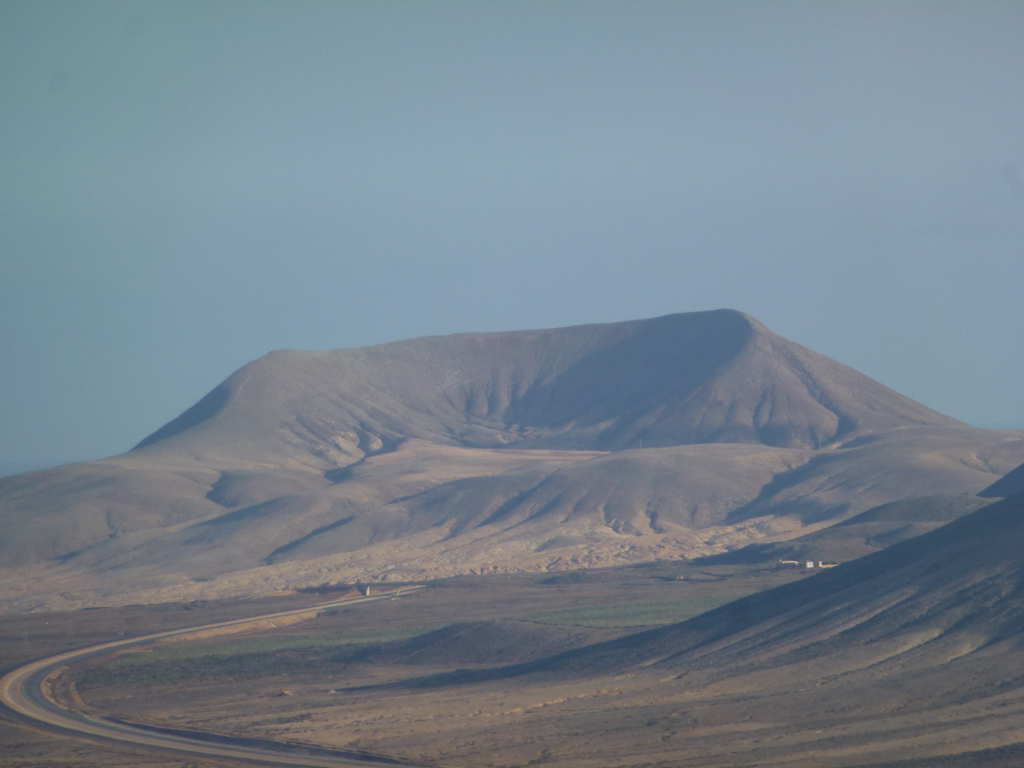 On the return to the viewing platform. The rim suddenly narrows. In the distance you can see the islands of Islas de Lobos and Lanazarote. The different layers in the rocks are fascinating. I’ll let Brian @G8ADD explain where they come from. 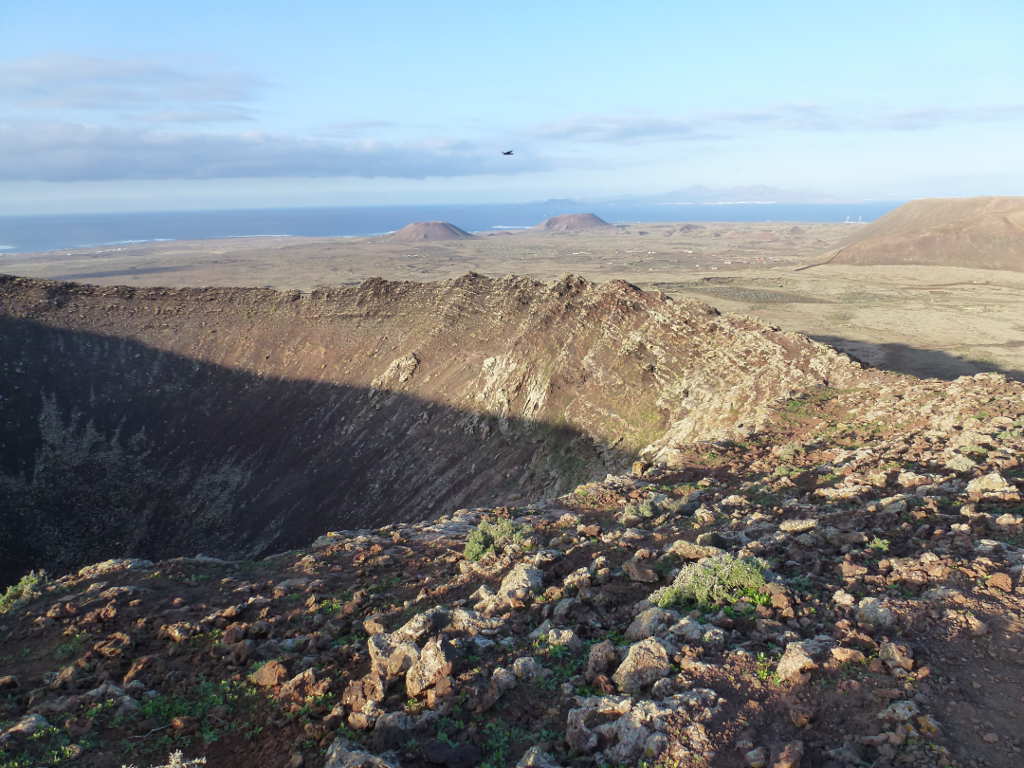 A different view of the layers in the lava, this time from near the viewing platform. 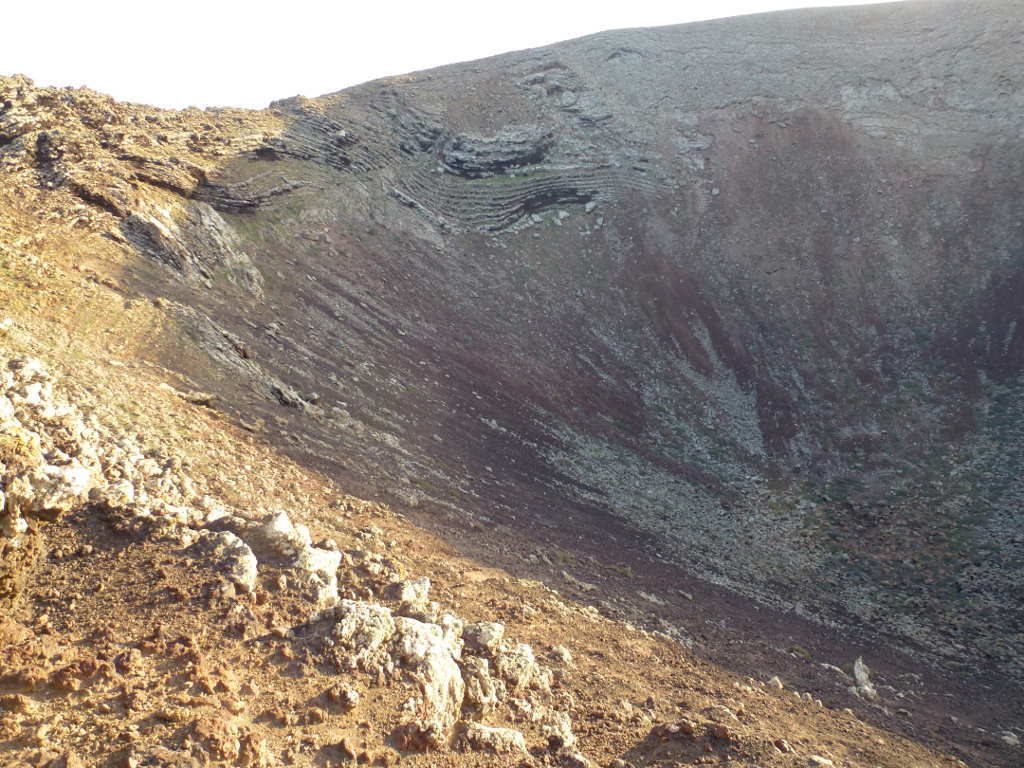 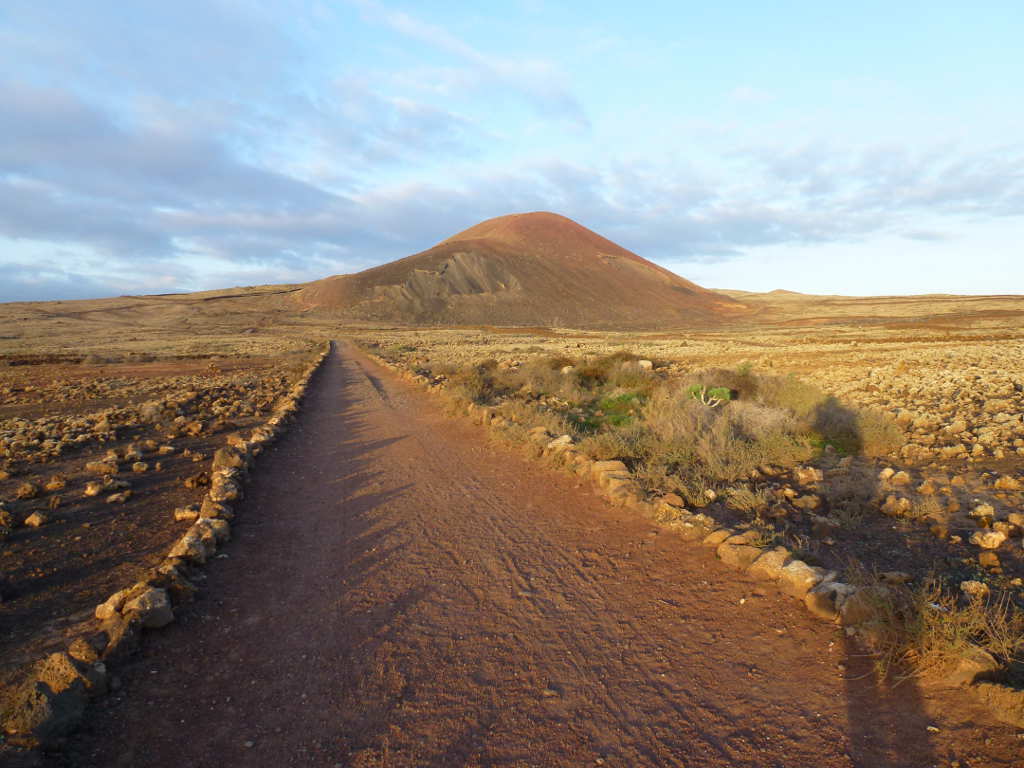 This is not a difficult summit. There are some that look like they need a bit of effort and will no doubt be rewarding. But I was on a family holiday with the chance to play SOTA. I could go back tomorrow on my own to bag as many of the summits as I could. I thought Fuerteventura was a spectacularly nice place. Just like Lanzarote, not only is the WX good, not only are the prices reasonable, not only are there loads of SOTA summits to activate, but every single local person I met could not be more helpful and friendly towards tourists. This friendliness to visitors seems to be a common factor with everyone I speak to who has holidayed on any of the Canary Islands.

As for the S2S event, well I enjoyed it.

All we need to do is to get Gerald to organise the next one so again I am in a nice DX-ish location to make me a nice catch.

Hi Andy, Congratulations on your activation and to offer these wonderful photos, congratulations, I’m sorry I did not deal with you again, it will be