Another summit I’ve put off for years, partly the drive and partly the walk reports and the field of cow doody you have to walk through. No cows or doody today.

I parked at Green Well Of Scotland, loads of space in the old road section opposite the track. WX foreacast was for cloudy then sunny spells then sunny. Close! It was actually very foggy when I arrived but I had seen that it was just in the valleys and the tops were clear.

The amazing bank of fog blowing over the lower tops, this about 2/3rd up the track. 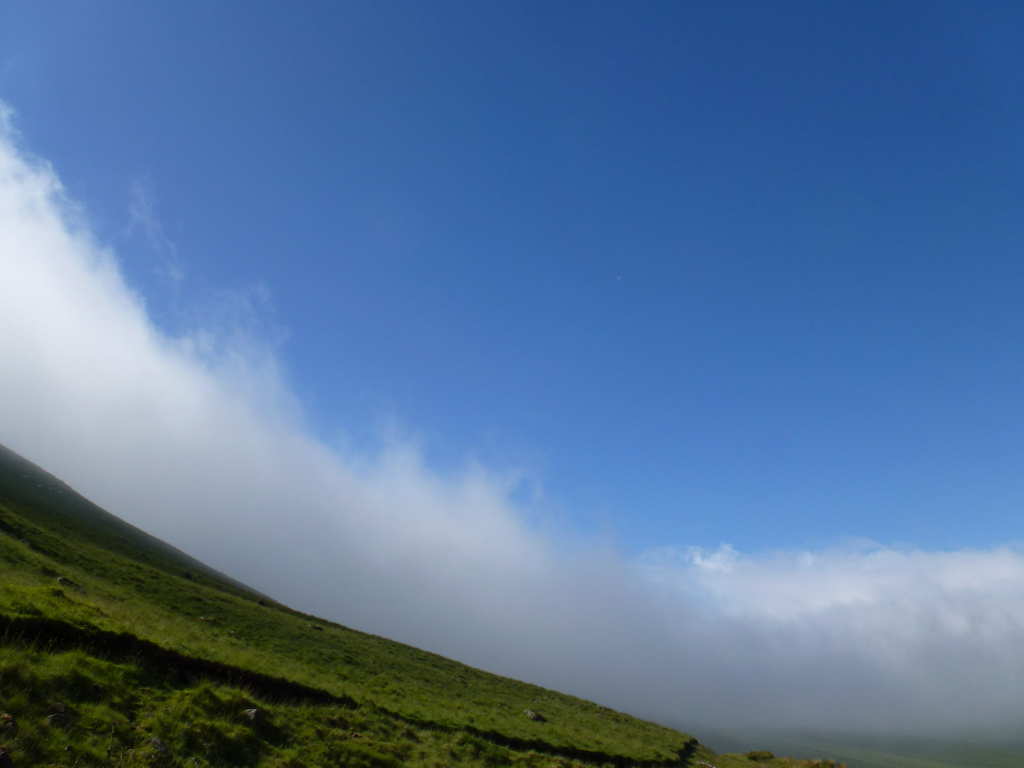 First view of the summit after 40mins walking. You can see the wall to follow to the summit. 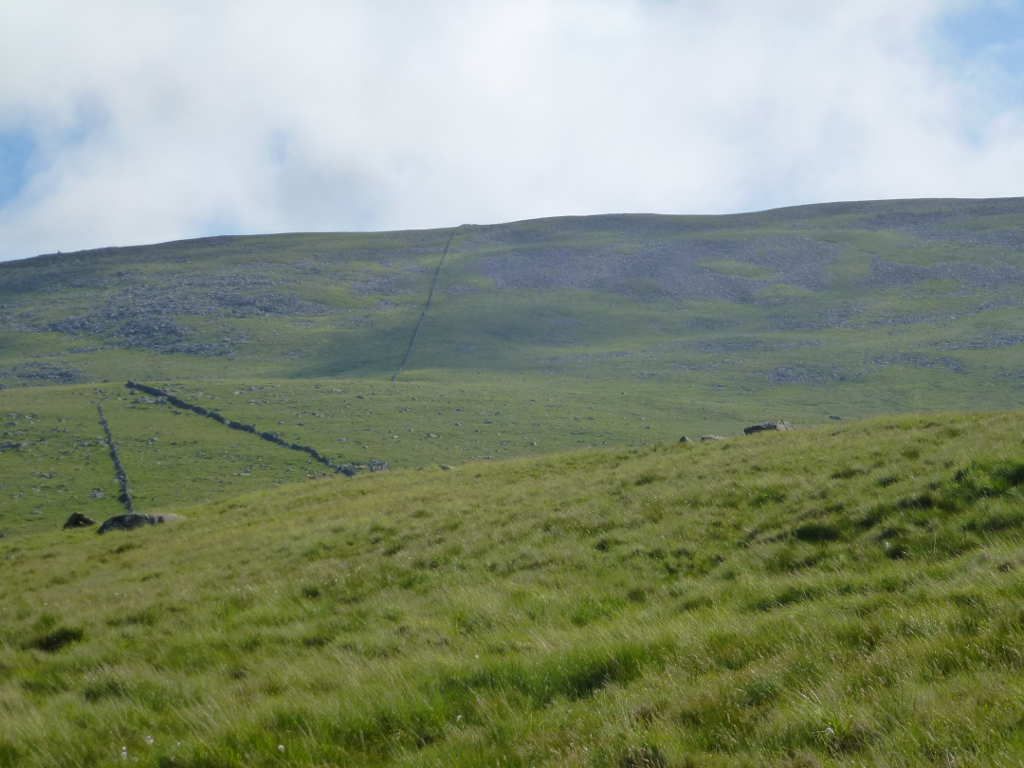 looking back from the same place, the fog is hanging about in the valley. 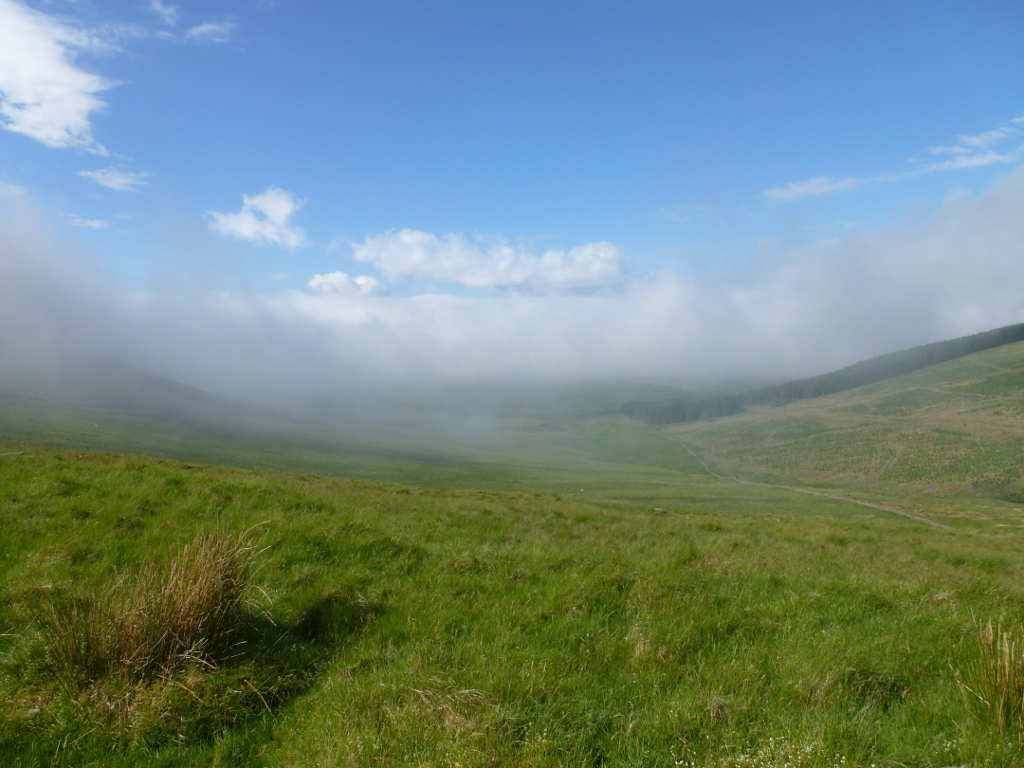 The bridge across the burn. There are some very mossy and slippy stepping stones but this bridge is where the wall turns and runs up the hill. I stopped here, filled my hat with water and poured it over my head. Very refreshing 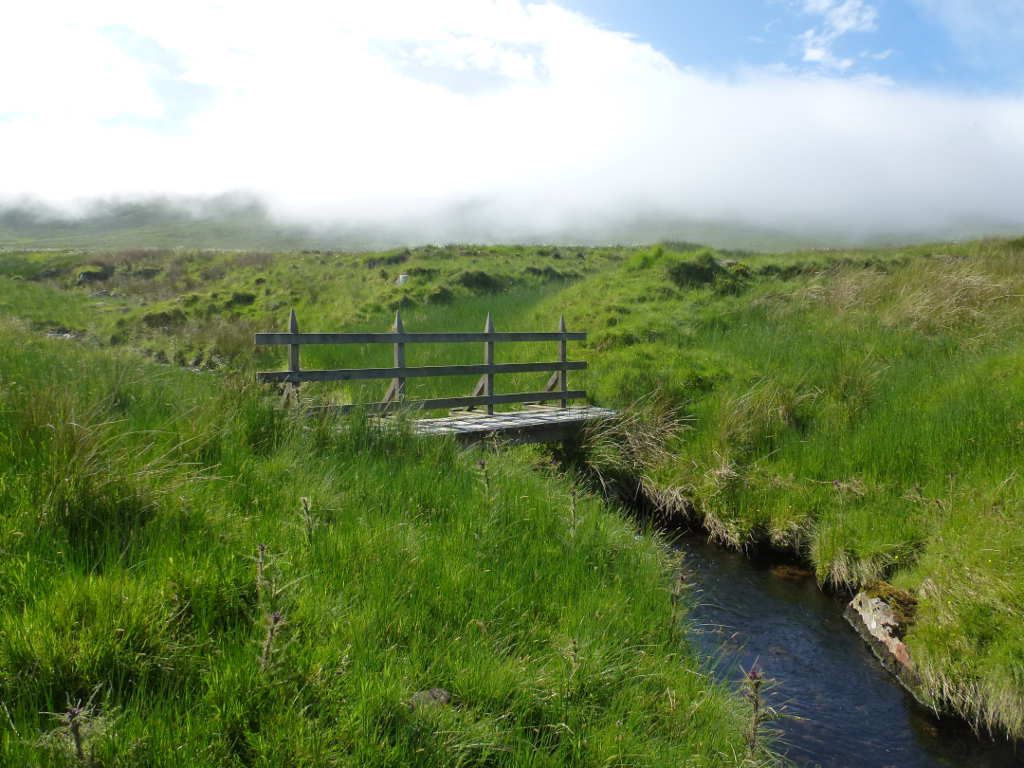 From the bridge, just follow the wall to the blue sky and summit. 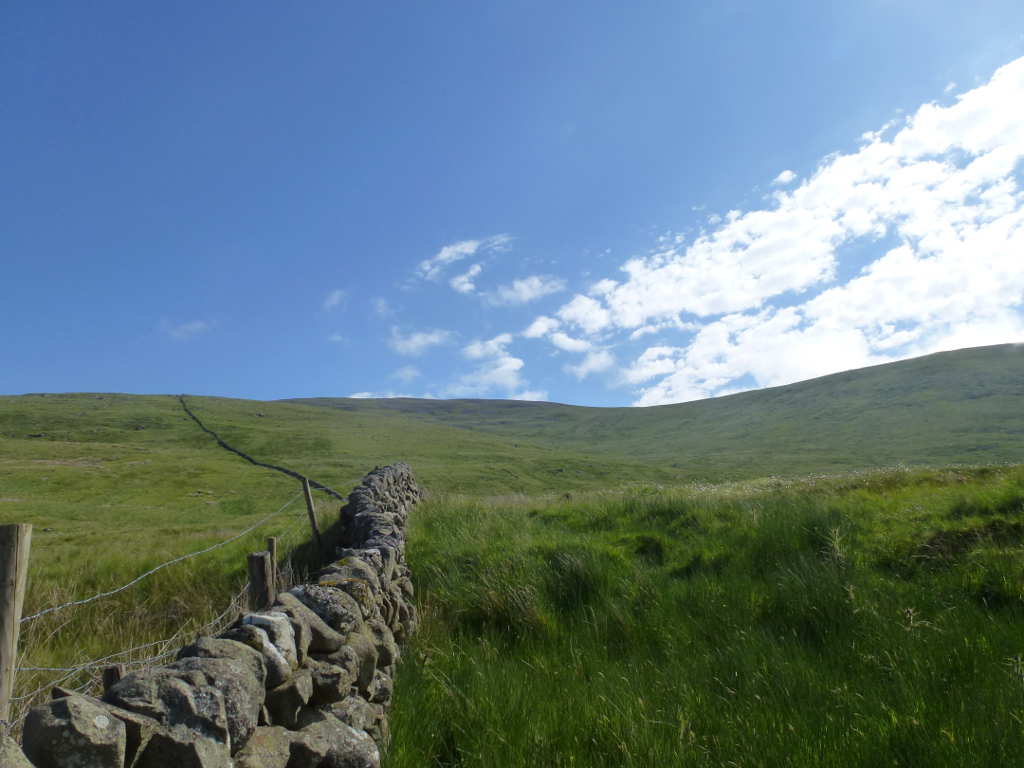 For a while the fog got much worse, here is the view from the summit back. 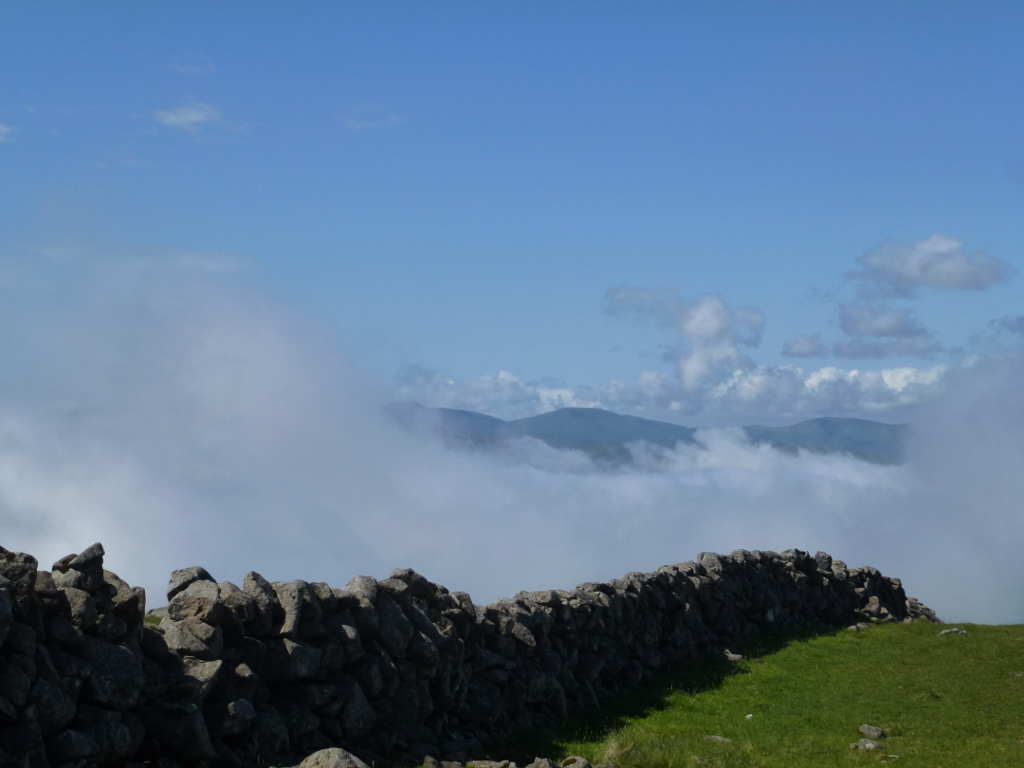 My plans today included 13cms. I was not pleased to find a Wifi station at the summit. Amec Foster Wheeler are the group running the major upgrade of the West Coast electricity grid. The 70 year old 132kV line is being replaced with a 275kV line and substations. There’s an omni (hi-band) and a 2.4GHz Wifi gizmo with PA, IP address 10.0.0.3. Wonder where 10.0.0.2 is. The lights were on but unlike my neighbours Wifi which I hear clicking away, this was silent! 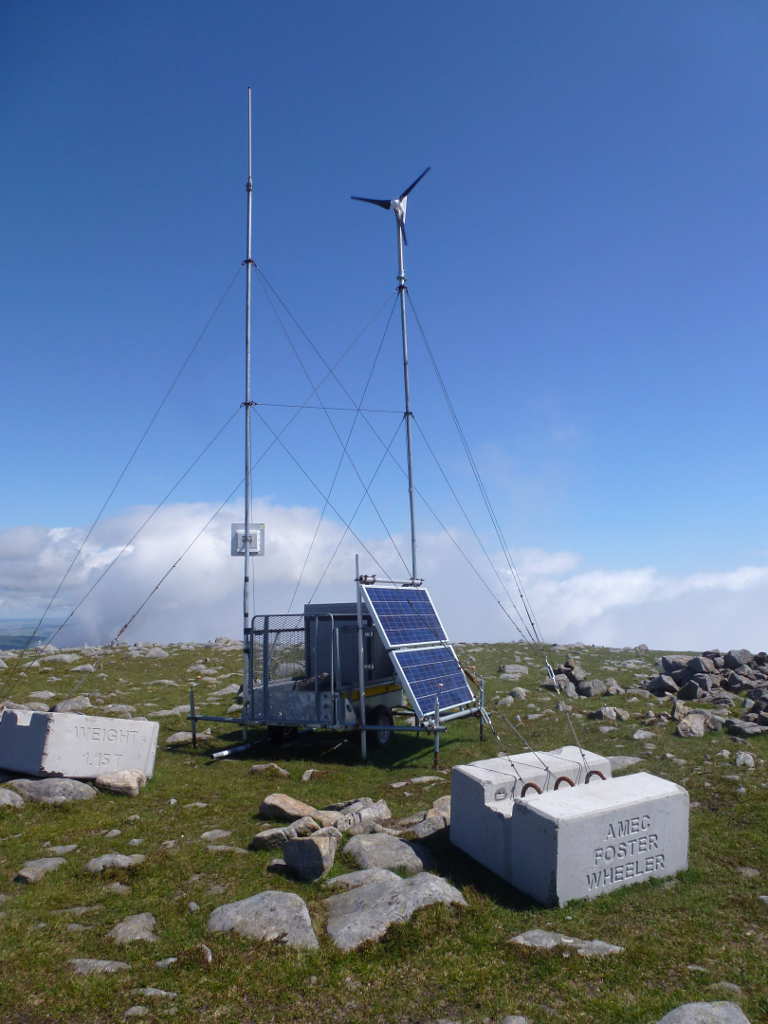 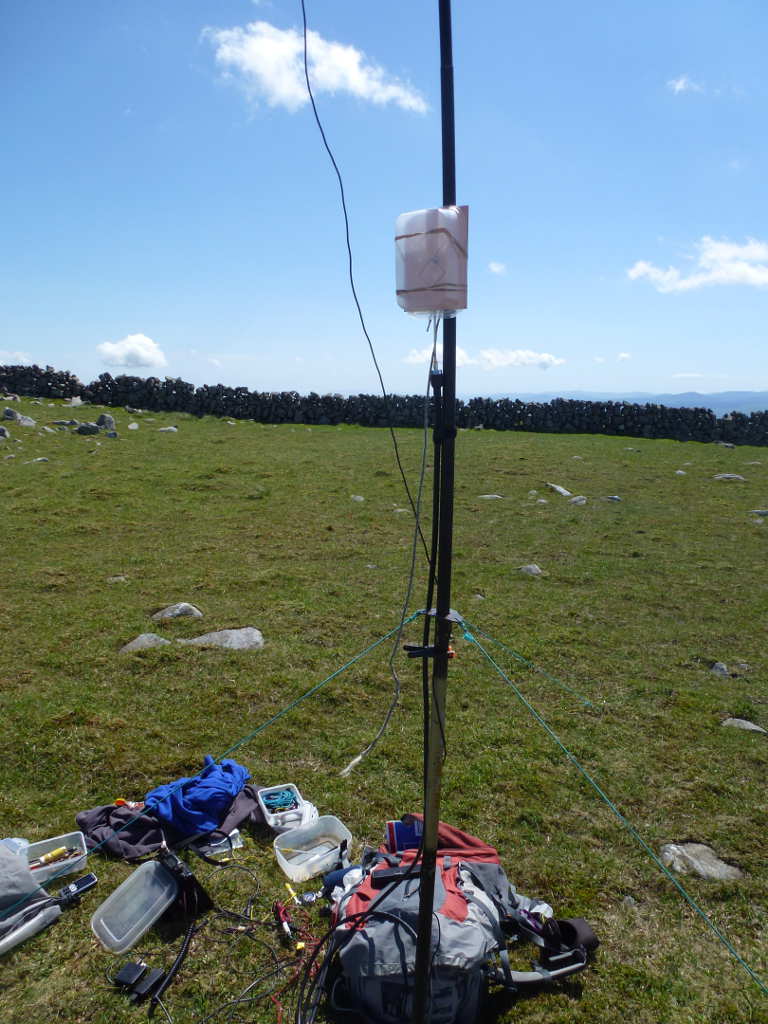 HF conditions were rubbish. Massive QSB on 60/40/30m and few signals. I did work YO on 40m at midday to give you an idea of the skip length. Anyway Jack GM4COX was out on Tinto SS-064 and Jim MM0GLM was way up at Comrie in Perthshire on Mor Bheinn SS-098. Jim is also in the 13cms gang and this was his 1st attempt using it on air. Almost LOS path and boy was he loud! So was Jack.

This shows the 817 S-meter for GM4COX at 51km on 2320.300MHz FM. On a day when there’s no 13cms activity sessions and contests this is probably far enough away from the centre of activity on 2320.200 to not be a problem. Jack was beaming Northish so I was seeing the signal from the rear quarter. 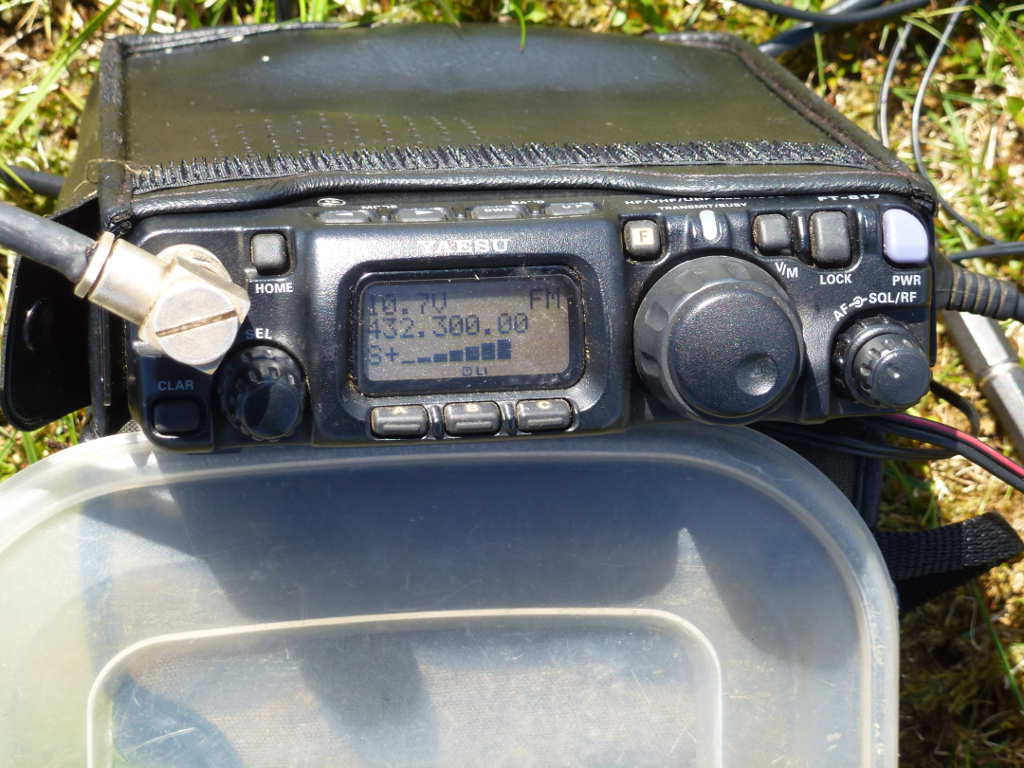 And this is Jim MM0GLM’s signal where he was basically pointing at me an Jack. Yes, it’s S9++++++++ on FM at 125kms. The antenna I use seems to be 2S points better than the 4ele PCB Yagi provided. This was confirmed as Jim said I was a better signal than Jack despite being further away. More antenna gain but not as cute and convenient as the PCB Yagi. 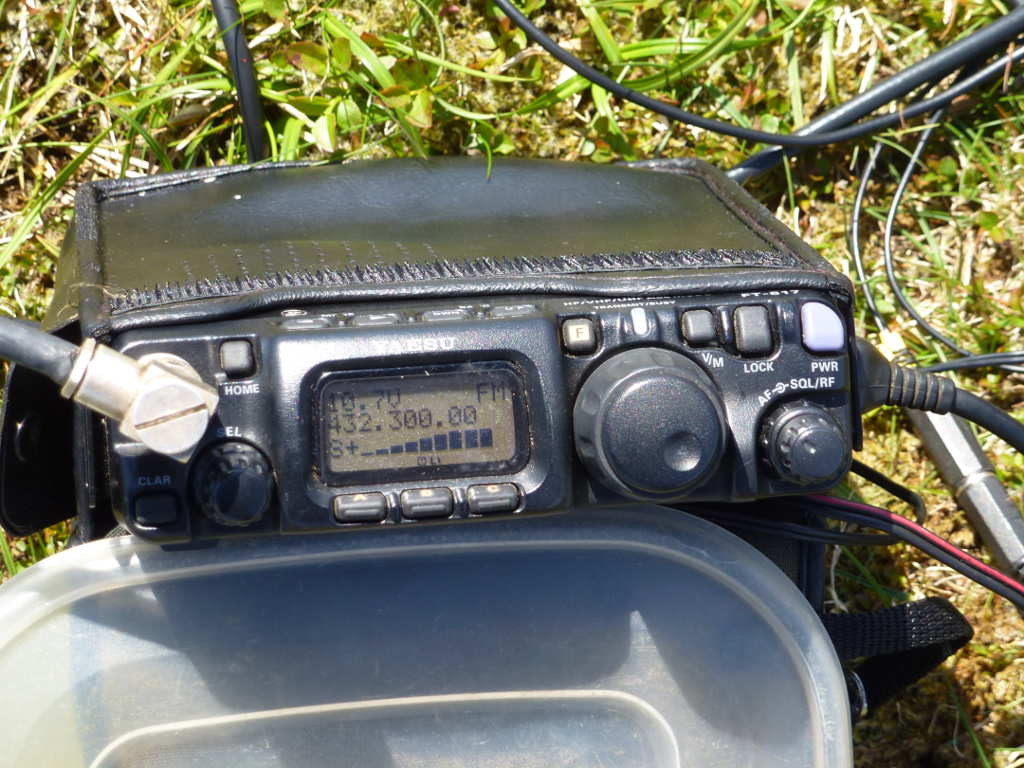 Here’s the transverter setup in use with Antenna, power, IF and PTT leads. 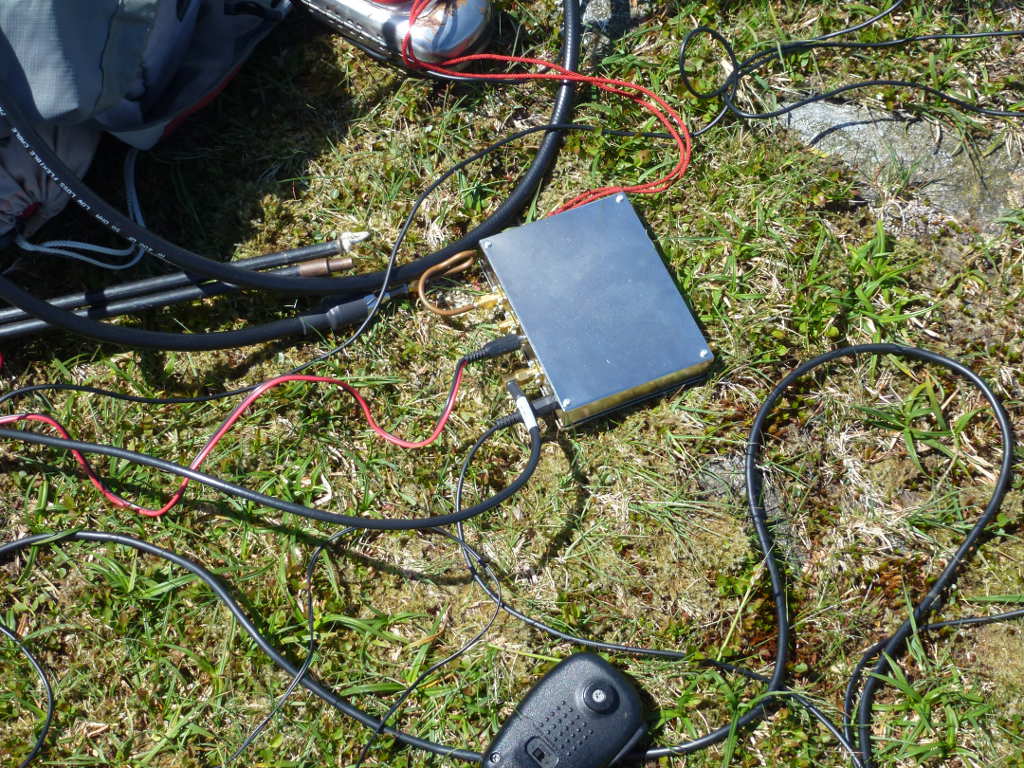 And a close up of my antenna held to the pole with an old boot lace! The feeder running up is RF400-UF. If I did my sums right, the total loss from transverter to antenna including joints should be under 0.5dB. 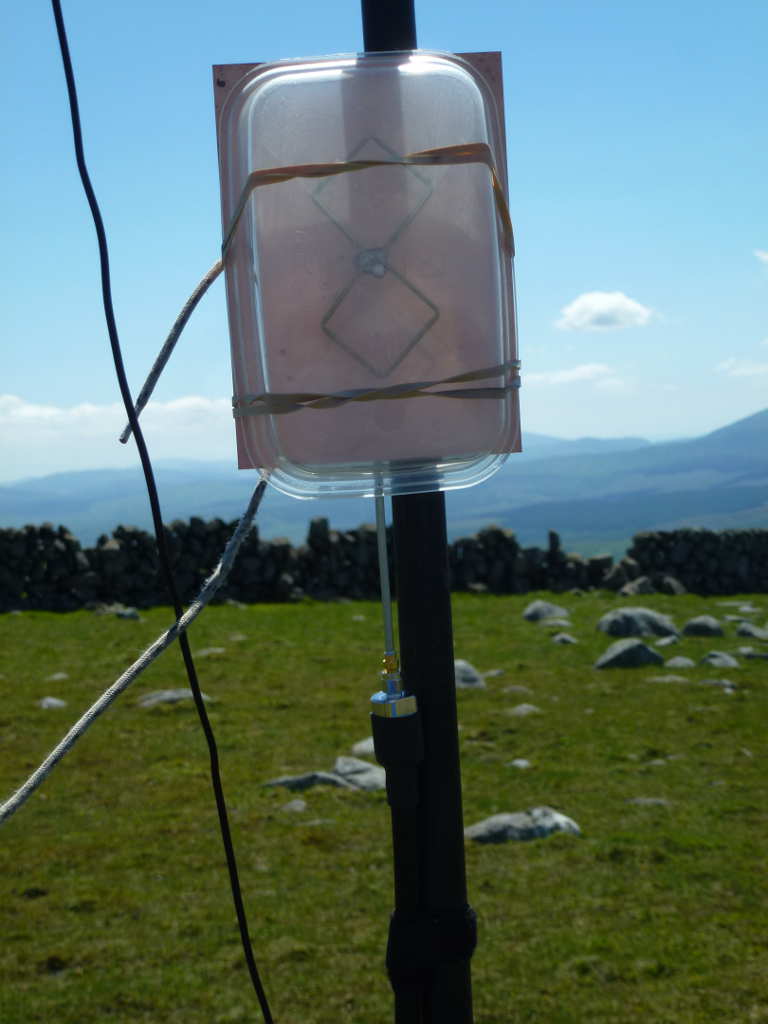 By the time I had worked everyone on HF and heard some EI stations on 2m simplex (they couldn’t hear me) and an EI repeater (definitely lifty conditions) and worked Paddy MM6IPO up near Braehead in Glasgow on 2m the fog had gone and it was silly hot. Paddy has a 13cms transverter and could copy me 59 on the PCB Yagi from in his shack. He’ll be QRV shortly

Looking at some hills I’ve activated but never seen before. I don’t get to this bit of GM enough to spot the hills. But the very distant hill on the far left is Cairnsmore of Fleet SS-065 at 33km. The hill to the right of centre with a step-like drop to the right is Corserine SS-033 at 16km. 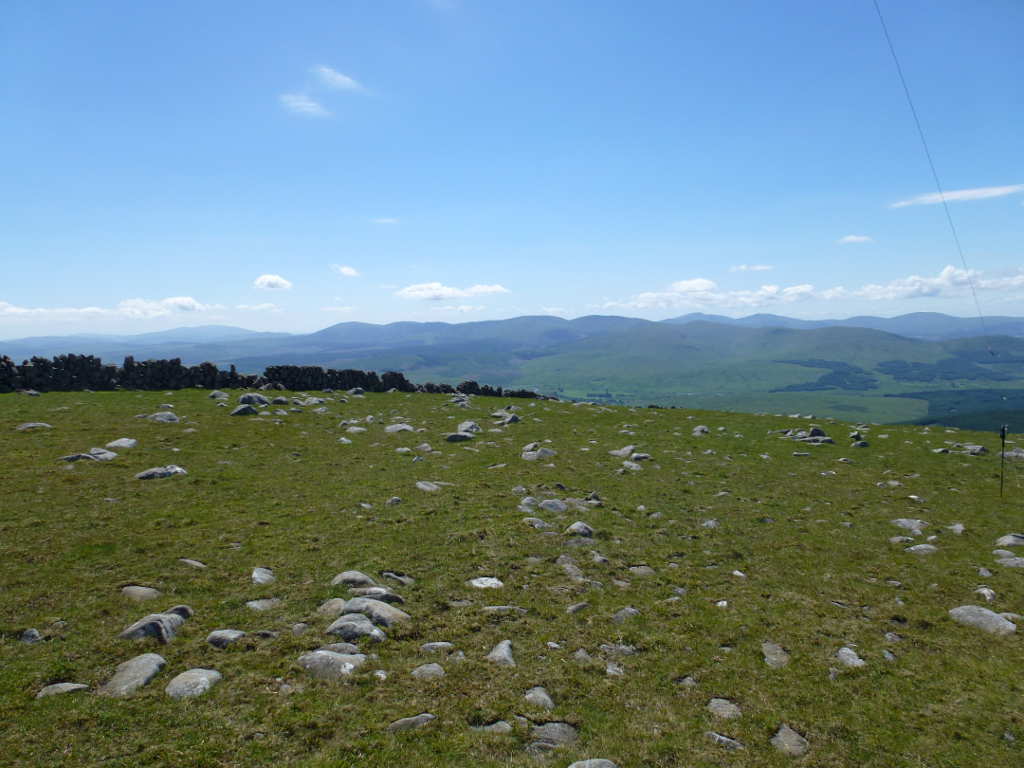 The trig point, an old one predating 1951 as you could see the metal tube inside. After 1951 these were cardboard as they only are needed till the cement sets. 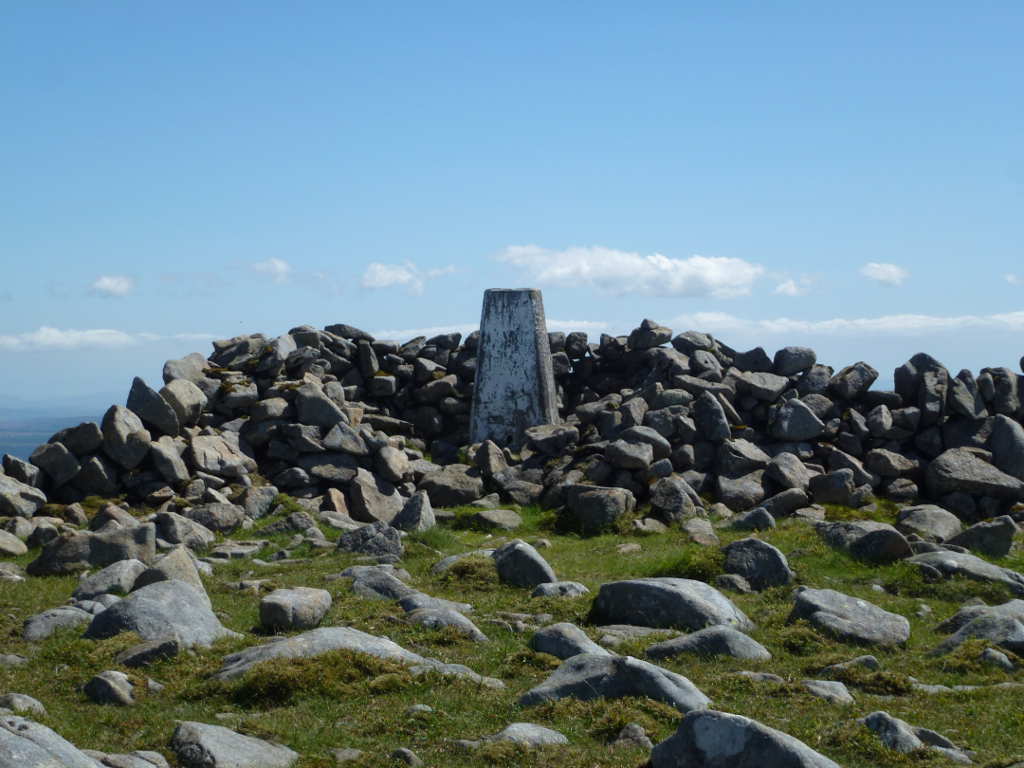 A very hot MM0FMF, keeping the beard and hair short at present. 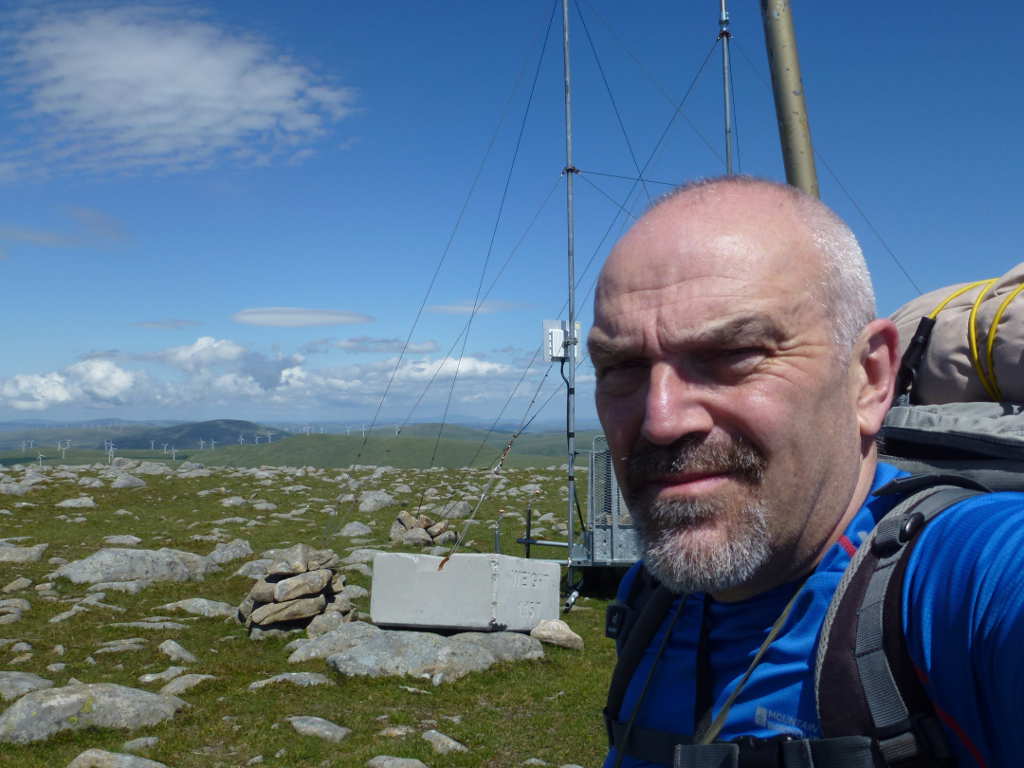 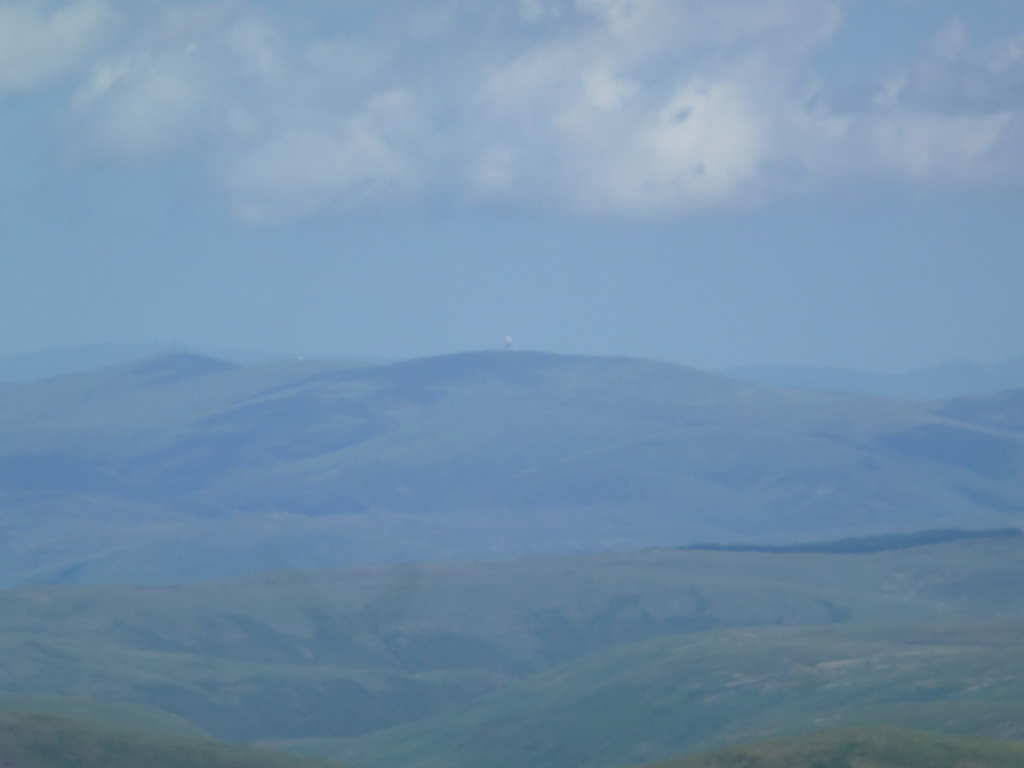 I took the alternative route back. Down to Dark Shoulder then on to Dunool. Down the steep flanks of Dunool to pick up the track and back out.

This view back shows Cairnsmore of Carsphairn to the right and Dark Shoulder to the left. 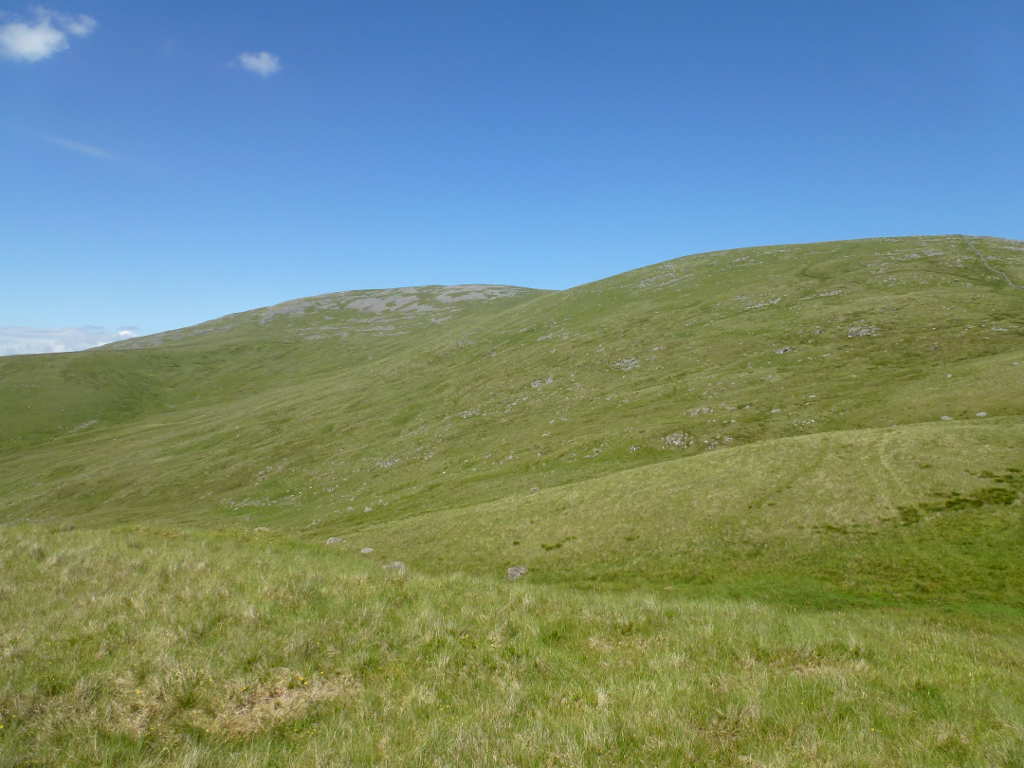 Back at the car I was exhausted from the heat. My feet are complaining loudly now. But hey what a day to be out and 2 more 13cms S2S, an all-13cms completion of Tinto and a completion of Mor Bheinn. Only 12 SS summits in my bucket list remaining.

Hi, Andy. You were inaudible on 40 (I even listened on CW!

) though on SSB I heard stations working you. There was nothing heard on 60, either. We need a patch for the sky!

And how about this for the path profiles. Superb results. And a Complete for me SS-098. Much appreciated Jim. 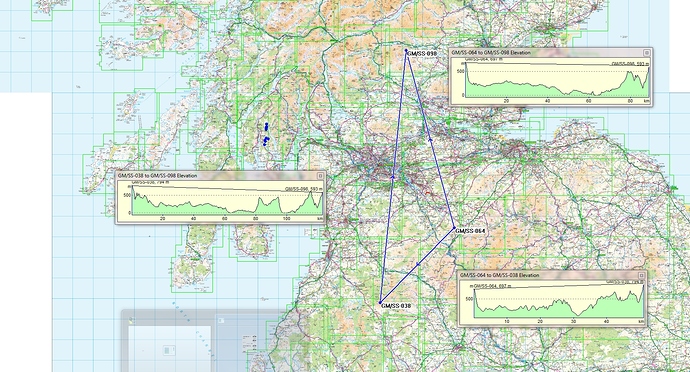 73 till our next escapade on 13cms

The bands were rubbish Brian. Enormous QSB and very fast peaks. It took several minutes to work DJ5AV on 40m as he was there long enough to send his call but my reply fell into the QSB. Lather, rinse, repeat until we were able to exchange reports. 30m was very short at times. I worked G3RDQ down on the South Coast which is not too unusual when I’m up in the Highlands but I was a long way South. Also worked Victor GI4ONL on 30m… very short, in fact it could have been ground wave almost.

But LF was pants. Unlike SHF, which, in comparison, was like Kylie’s gold pants!
( https://www.youtube.com/watch?v=t1DWBKk5xHQ )

I trust the WiFi PA “accidentally” accompanied you down the hill