My plan to complete all the SS summits South of a line from Glasgow to Edinburgh takes another step towards completion with the successful activation of Cairnkinna Hill. It’s taken 9+ years to get this one as it is one of the many 2 & 4pt summits in Southern Scotland that a downright bummer of place to reach. It’s not too far from home, only 42miles as the crow flies and 68miles by road. But it took me 1hr55min to drive that early on Sunday morning with zero traffic. It’s made worse because Cairnkinna is well up the Scaur Water valley, about 25mins drive from the last village on the main road along narrow bendy lanes with blind bends and hills. Because of this, I’ve always gone somewhere else, pain of a journey for an average hill worth 2pts… it’s not worth the effort. How wrong can you be?

I knew parking would be difficult, the road is very narrow and a Google Streetview analysis shows few places. My car has the tyre equivalent of ballerina’s shoes so having to park on soft muddy gorund is asking for trouble even with its magic AWD and EDLs so I took my ageing pickup. Proper knobbly tyres and real 4WD, that would be able to get through anything. It has been a little wet here and I was expecting proper boggy soft verges to the road.

I was going to do this summit a few weeks back but the WX forecast changed from grey to “Noah, fetch your boat” so I did West Lomond instead and sat in the mist and rain which wasn’t predicted instead. But this Sunday someone had ordered wall to wall sunshine and warm weather with hardly a breeze. Cairnkinna was on. The change to BST meant I’d get less sleep and I wanted to be away sharp so I locked away the booze on Saturday night.

Sunday started with gorgeous weather and the drive was easy. My first parking place is by the lane leading to Woodend at NX795996 but this was a huge boggy mess. And in my hurry to take the pickup I’d forgotten it’s a lot longer than a car and it would have been a bit of a blockage. I really don’t like causing any access issues, I’m out having fun and blocking someone’s access is just ignorant. My next place further on was actually a passing place so that was struck out. Now I could have parked in many places on the verge but there were thousands of Daffodils in flower and I wasn’t going to drive over them and crush them, so that was more places dismissed. Chanlockfoot Farm has huge amounts of space to park on but there wasn’t a soul to be seen so nobody to ask if it was OK. In the end I parked in a disused quarry at about NS781008. This put an extra 15mins onto each leg of the walk but it was a killer day so who cares. And, most important to me, I wasn’t destroying the countryside by parking on lovely flowers just to save a bit of walking.

It was a sheer delight walking back to the track that leads to Woodend house. The Scaur Water was full and very noisy, the ground either side of the road is mixed deciduous woodland and a lot of the regimented Sitka has been harvested. It was a great Spring day with all the birds singing their hearts out as the sun shone down. Result! So it was down the road to the obvious track into the woods, through more lovely trees and out onto the fields full of sheep. Woodend came near and there is a sign on the gate saying the garden is private and to use the gates in the fields to bypass the house. Once around the house and fields you leave the track and strike up the hill. It’s an easy walk, head NW up the hill till you get to the top then turn through 90 to the NE and go up to the humongous cairn and trig. Job done in about 1hr45.

It was still warm and sunny at 552m ASL, in March in Scotland. How can this be?

I was able to spend almost all of the 2.5 hours I was on the summit in just a T-shirt only needing a fleece when the wind grew stronger for the last 15mins.

Part of the way I stopped for photos. Here is the NATS ATC Radar on Lowther Hill. Green Lowther SS-056 is about a mile further back and hidden. 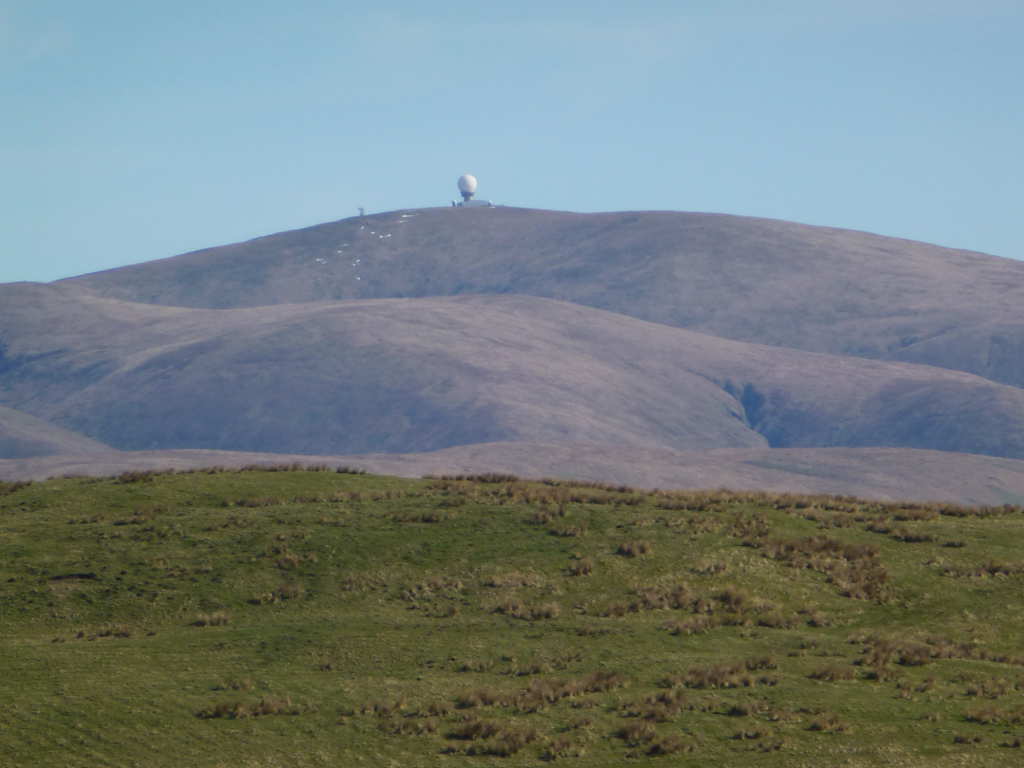 The target, the enormous cairn is just visible here when I was about 35mins from the summit. What was surprising is how dry the ground was here because it was “proper” wet at the foot of the hill. 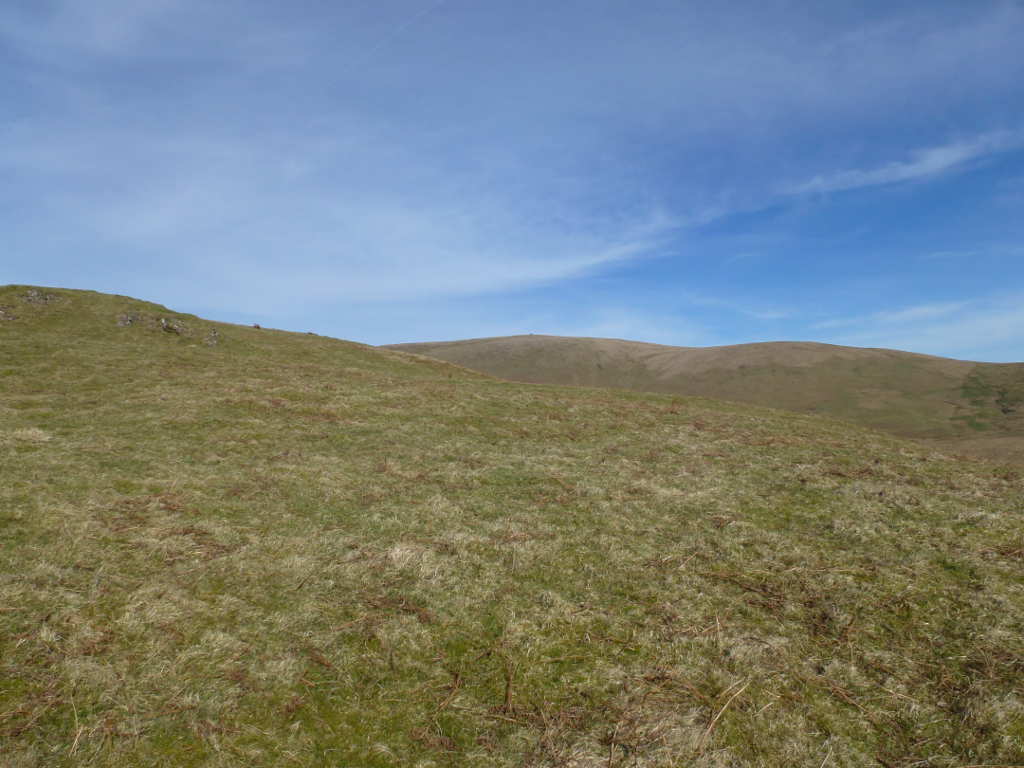 Looking back into the Scaur Water valley. You can see the farmland at the valley bottom and how much improved the land is compared to the moorland on the hills. 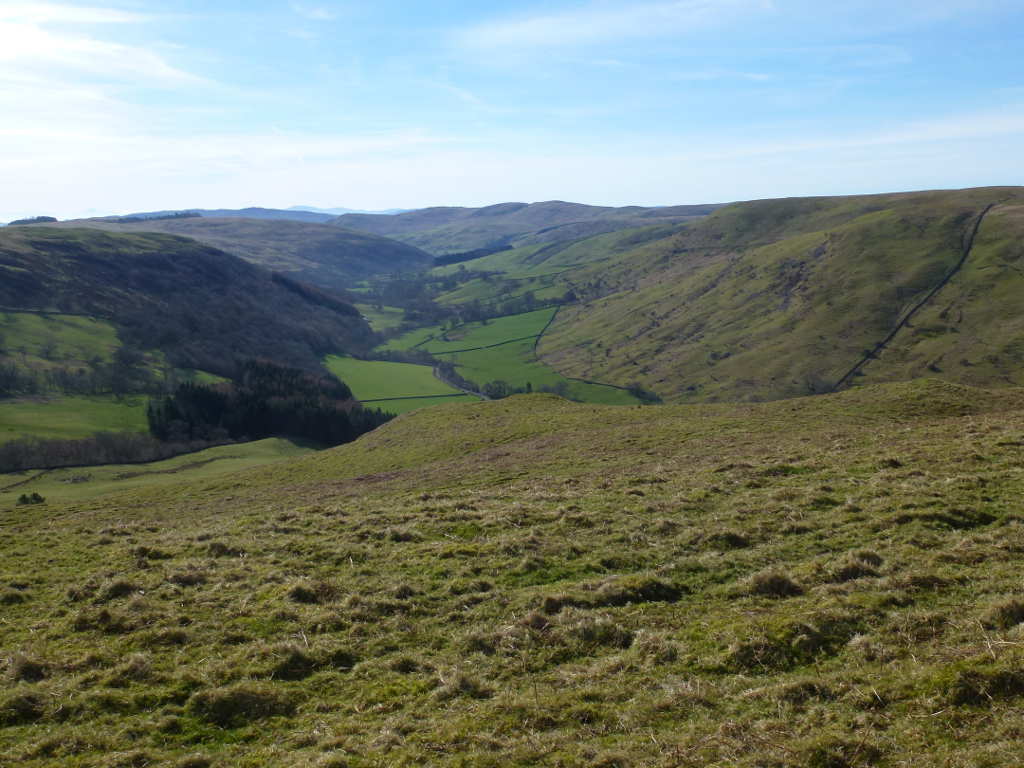 I noticed that the visibility seemed excellent. This photo shows Skiddaw G/LD-004 (right) and Blencathra G/LD-008 (left) some 90km away. Unlike here, there was a moderate fresh covering of snow on these and many other LD summits. I think the far distant peak in the centre is Helvellyn or maybe St. Sunday Crag Helvellyn is 105km away. i.e. far enough away for a Microwave award. That shows that a pair of 23cms handhelds would get you and an accomplice an award without really trying. Yes, the photo is not straight. When not wearing glasses I just point the camera and look at the blurred blobs and hope! The water is the Solway Firth between England and Scotland. 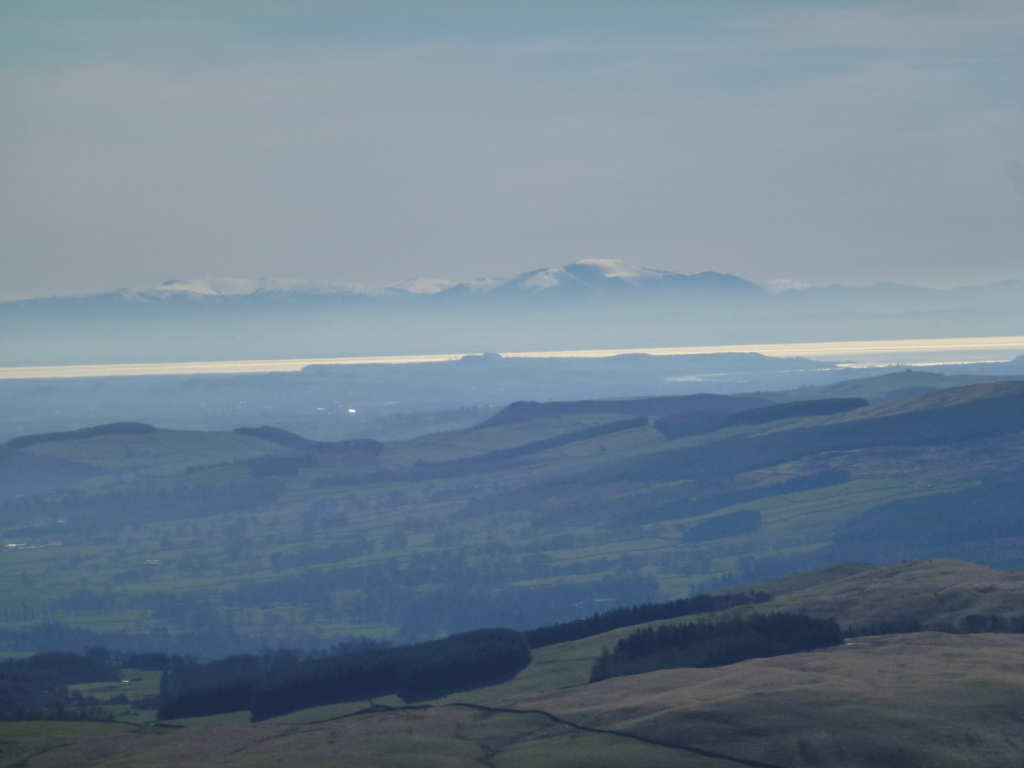 The walking is not hard, the grass is a bit long but to be honest, it was not much effort to get to the top. Finally the full-sized cairn that gives the hill its name and the trig are reached. Lowther Hill Radar station is behind the trig point. 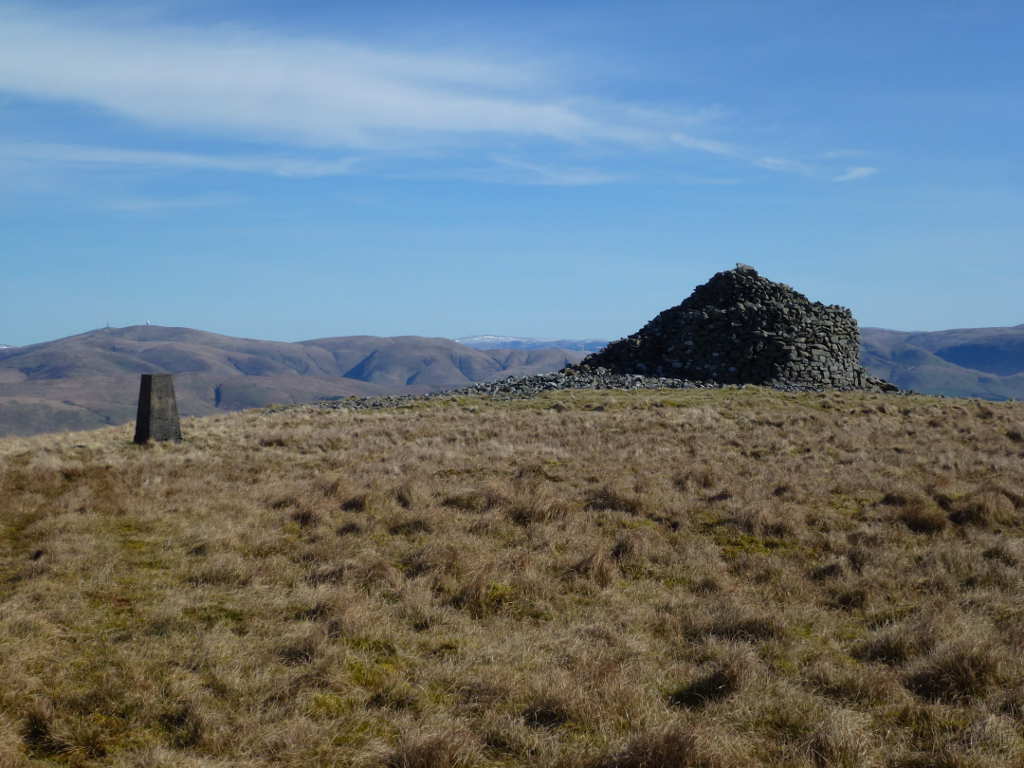 Onto the radio. As usual I started on 60m but spent sometime trying to get a phone signal. If I put the phone in the right place I got a decent internet connection but blink and the phone started moaning about Emergency Calls Only. Spot out on we’re off. The band seemed reasonably lively favouring more distant stations. I worked a few week GM stations and some very strong Irish stations. I worked Paul MI1AIB who was operating as GB8BKY. I was honestly unsure if special event stations are kosher on 60m or if they are haram. I got Paul to work me as MI1AIB so I was happy but I really don’t know if GB calls are OK on 60m. Opinions please? I finished off 60m with Ian and Esther GI0AZ(A)(B) on GI/SM-015.

40m was long, I worked PA, HB9 and OK stations on 40m CW. I also managed one G station, Mike G0BPU a long way away in Suffolk. Not too many on 40 CW, how it has changed when I would long for the pileup of G stations to subside and let my brain cool! 40m SSB produced Don G0RQL. Don is one of my most consistent UK chasers aided in these times of low solar activity by being a long way away to help with the long skip on 40m when the MUF is low and no SpE is about. The one that got away was Ken GM0AXY who I could hear calling me. With the quietest of RF conditions I could hear Ken on groundwave at 31 but he would be running 100W or more and he could not hear me reply using just 5W. 60m is about to go AWOL as Summer arrives and I feel it may be much quieter on activations during the Summer. Better do some VHF and SHF instead!

Next was 30m CW and this was in good shape with plenty of chasers from DL, EA2, HB9, SM, LA, OM. I had another S2S with OM3CUG/p on OM/ZA-111. Signal strengths from the chasers was really good on 30m. I had a shufti at SOTAwatch and saw MW0VFC/p on 10.107 and I could hear him at 31 working a huge pileup. I flitted between my working frequency and that but he was always busy and would not hear me over the others. Then his frequency was silent, another one that got away.

I had thought about snaffling Green Hill GM/SS-123 on the return but I decided it was so very lovely that I would stay for longer up here. Also it was this time of year when Neil 2M0NCM got ejected by a game keeper who was doing some muirburn on the hill. I could see 5 separate smoke plumes from muirburn happening all over this part of the country and decided it would be just my luck to run into the same guy. I pulled down the inverted-V and put up the vertical and spotted myself on 20m CW. I was feeling lucky because whilst there was mayhem on 20m SSB with the contest, the band seemed alive.

Another view down to the Lake District. This shows the whole range of snow capped summits down in England with very little snow up here in Scotland, slightly odd conditions.Those summits will include Grassmoor and Grizedale Pike. The dark nearer hill on the extreme right is Criffel GM/SS-130. A summit I am leaving till we’ve had a good long dry spell. 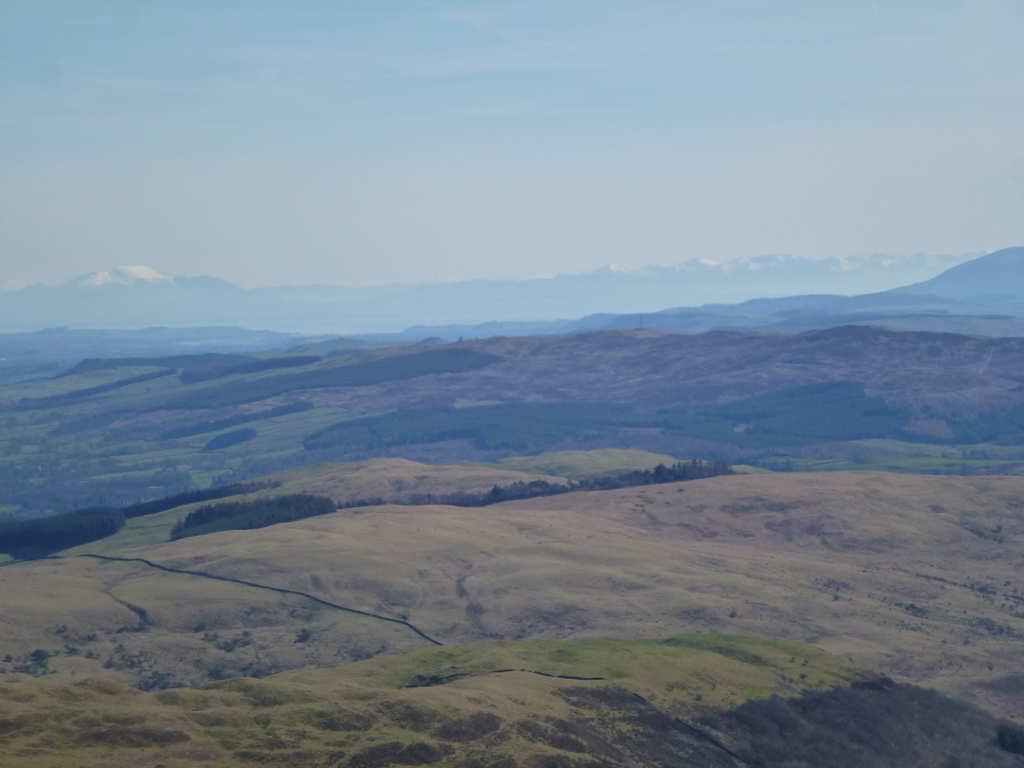 Tinto Hill GM/SS-064 (far distance) showing the red tint and hence the reason it is called Tinto! It is surprising just how visible this summit is from a huge area of Southern Scotland. 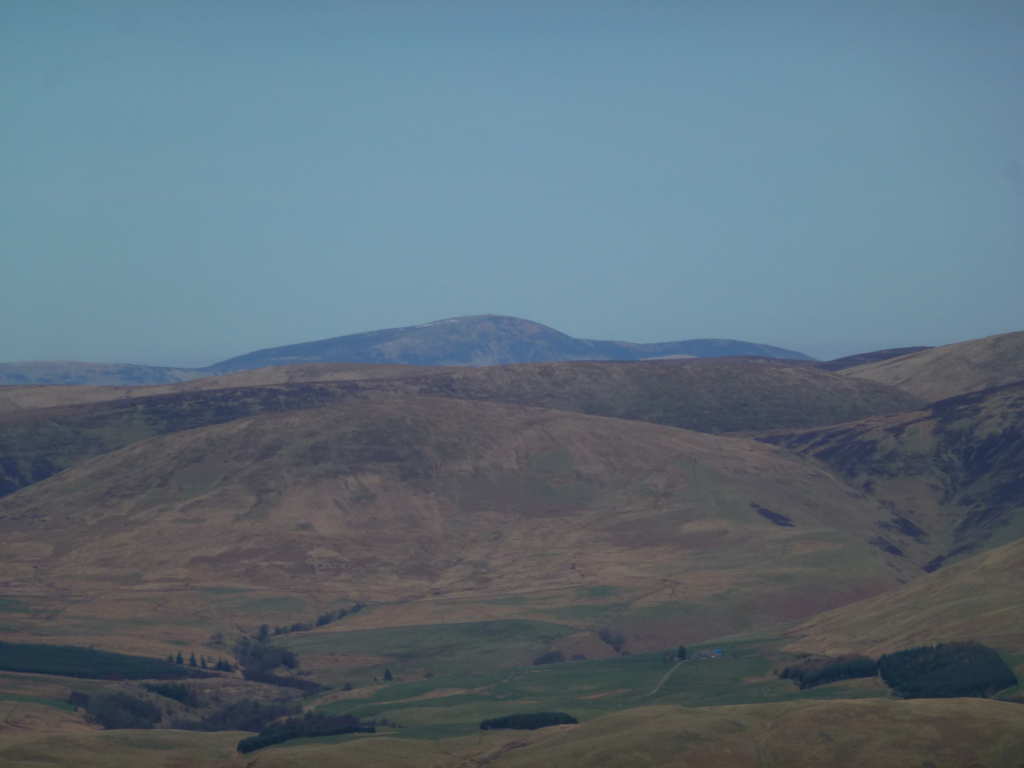 The 5m pole and 20/17/15m vertical. This pole has been used for most of my activations. I’m guessing 400 activations by now over 10+ years. It’s starting to show some wear and tear. It’s a Shakespeare brand and I’d love to get another one as it seems very durable. 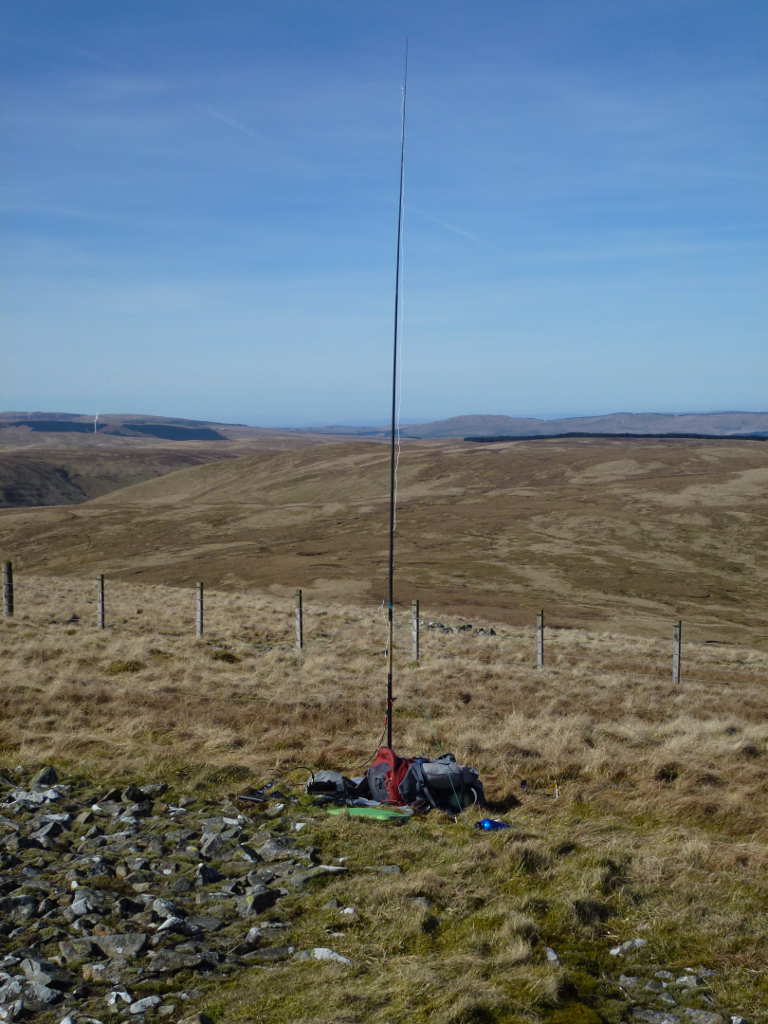 I packed up, had some diabetic pills and a Mars Bar and walked out the same way as I came in. 1hr20mins to get back to the car. It was lovely walking out and hot. Not warm but hot. My can of (diet) Red Bull was very warm. Still it went down with the purpose of keeping me awake on the drive back. I came down from Abington J13 on the M74/A74(M) via the Dalveen Pass and went back via the Mennock Pass and Wanlockhead. I wanted to check that the parking ion Google Streetview from 2009 matched the current arrangement in Wanlockhead for Green Hill.

Just before I got to the car I got this photo of a young calf having a snack. 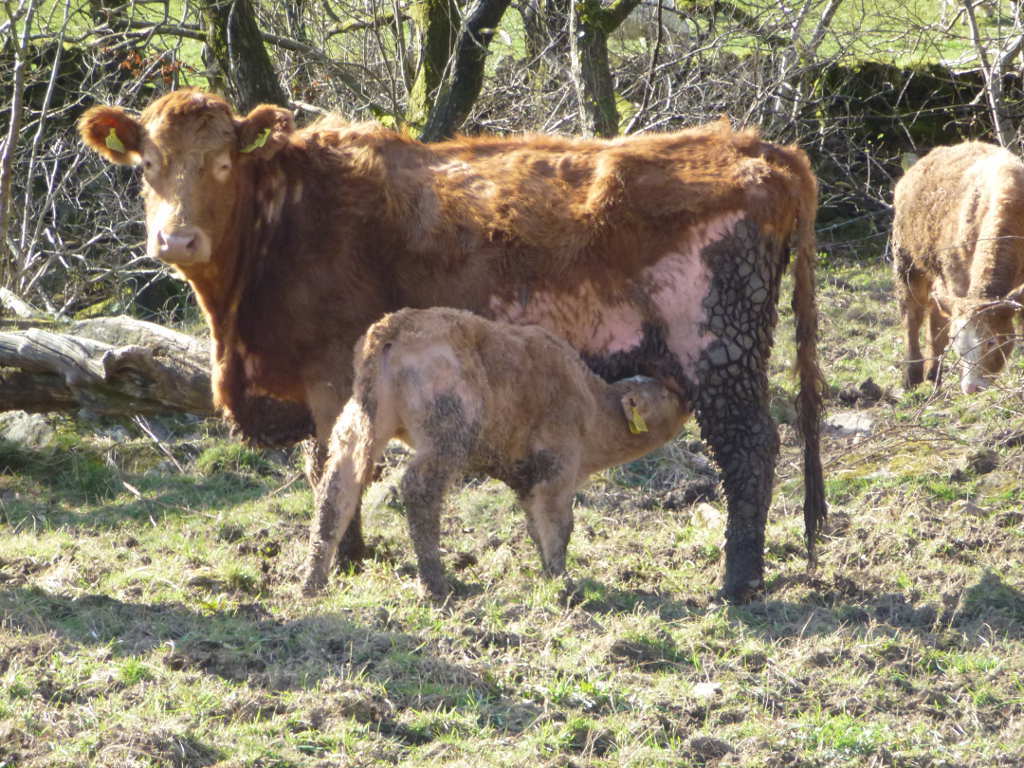 I had marvellous views and some half-decent propagation and that made what was a run of the mill summit into a great day’s SOTA. On a grey day this would be tedious as there’s nothing about the hill itself that is interesting. It’s the views around the hill that make it worthwhile. It would be a cracking hill to do on a cold, snowy but bright sunny day. It would also be a nightmare to reach on such a day in an ordinary car as those roads never get treated.

So another unique and one less on the list. My coastal expedition is approaching fast and I’m looking forward to those summits. Thanks to all the chasers for making this worthwhile.

Yes, the photo is not straight. When not wearing glasses I just point the camera and look at the blurred blobs and hope!

Good to work you again, Andy. I use Picasa 3 to process my photos. It has a neat facility for straightening photos with a slant, all in all its a lovely toy and its free!