We had been determined to get up Cadair Berwyn since Christmas, but the convergence of reasonable weather and time off work just hadn’t happened. We did give it ago a few weeks ago but only got as far as the 750m elevation mark before we were to be defeated by gale force winds.
Our luck changed last week when the Cadair Berwyn mountain weather started to present a window of opportunity for Sunday the 28th February. The forecast was promising to be a clear but cold summit with light wind, perfect!
We had decided to ascend up the Valley and descend the ridge over Trum Felen in order to make an almost circular walk. The higher altitude temperatures were forecast to be at freezing or below and indeed they were. This however made the going easier as the normally boggy sections after the stream crossing were frozen solid.
Now I have only just started my adventure into SOTA but not walking, so the deal with my XYL Bev is, it’s a walk first, as we have done for many years and SOTA second. With this mind and the summit temperature expected to be -4 degrees Celsius with wind chill, I wasn’t sure how long of an activation I was going to get away with.
Once on the summit of Cadair Berwyn it was beautiful clear day with amazing views, nothing in the world seemed to matter, it’s one of those, “Life doesn’t get better than this feelings”
After taking in the views for a while it was time to get down to business. I set about putting up my aerial for the planned 20m activation while Bev deployed the Boffy shelter, coffee and food. Some 20 minutes later and a bit explaining to another couple what the big pole and wire was for I was in the shelter setting up the radio end. It was just after 13:30 and we were good to go. I thought I may have struggled to find a clear frequency with weekend contest traffic but it wasn’t too bad. A self spot spot on 14.308MHz and we were off. I managed to make 21 contacts in 16 minutes or so before Bev started to get really cold. To be fair by this point she had been sat around for nearly 45 minutes. I put out a last call out but struggled pick anything else out of the noise so called a QRT. 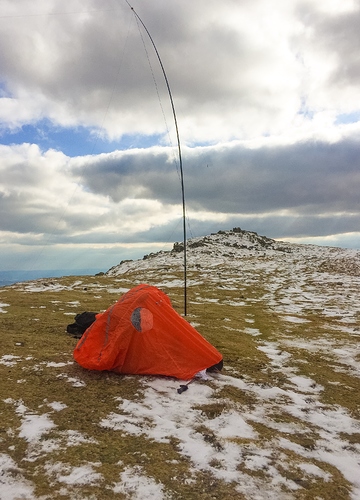 20 minutes later we were packed up and ready to make our way down. I did want to have a go on 2m but after skirting around the idea with Bev I sensed that would have been pushing my luck 
Thanks to all the chasers on the day for an enjoyable activation. 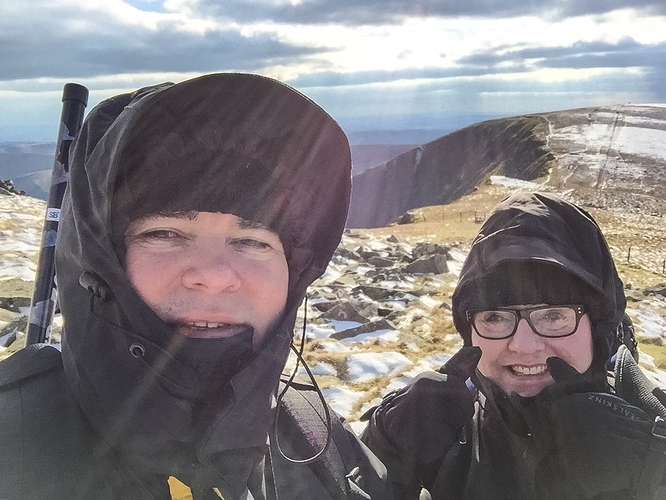 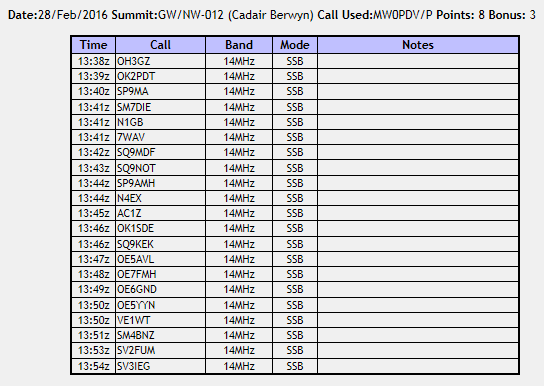 Thanks for the report and the pics. I did listen out for you on 2m but we spent more time walking than activating (see blog http://gw4vpx.blogspot.co.uk ) so I thought maybe I’d missed you between summits.

Reading your blog did make me think I should have started on 2m then moved on HF.
I was aware at the time that I was missing out on some potential S2S’s on Sunday.

Like the blog BTW, that primus brings back memories

Many of us keep our 2m handhelds on when walking to/from a summit and when actually activating even though we may be on another band. It gives you opportunities to find out who is out, where they are or even just having a chat on your journey.

It means s2s opportunities, giving a chaser contact to another activator who maybe struggling to qualify and also let those that are already on a summit know that you are nearly on yours and looking for an s2s.

I’ve also been able to get spots posted for HF by chasers on 2m and many have kept me company on the way up or down from a summit which also raises some safety advantages also.

Just some points on the advantages of keeping that 2m hh on during your day on the hills.

missing out on some potential S2S’s

Many of us keep our 2m handhelds on

Paul I totally agree with Allan’s comments. On Monday I was working a group of chasers on 40m when a call come in on my handie for a S2S. I was able to QRX the 40m chasers take the 2m call and return to 40m. Work all the 40m achasers and bagged a S2S as well - see blog

Just some points on the advantages of keeping that 2m hh on during your day on the hills.

Thanks for the tips guys, in hindsight it does seem kind of obvious to keep the HH on. I did actually have my FT270 in my top pocket turned off!