The JA SOTA QSO party on Sunday March 20th was my fourth SOTA activation. A week before the event the weather forecast didn’t look very promising, with lots of rain coming in. After consulting with BU2EQ I decided to activate BV/HS-017(大山背山), not far from my third activation in Hsinchu. BU2EQ would be camping at the nearby summit BV/HS-013(向天湖山), and BX2AI would be camping a bit further down south at BV-HS-012(梅山頂). So in Taiwan we had a real SOTA triangle, but don’t worry: nobody vanished in this one. During the week the forecast started getting better and better and by Friday partly sunny skies and 28° Celsius were predicted!!! The SOTA gods were clearly in our favour. 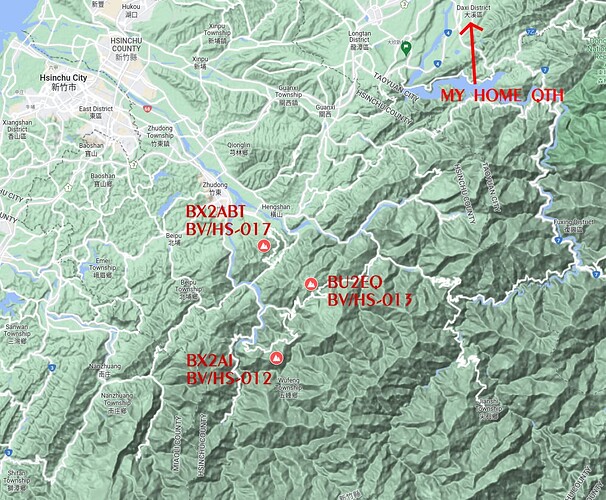 Learning from my past SOTA activations I scouted the route to my summit on Saturday and found that BV/HS-017 was basically a drive-up with a big pagoda acting as a resting area. Many locals come here to enjoy the view of Hsinchu, have lunch or afternoon tea. There is a possibility to walk up from the other side, but for this time I decided to take it easy and ride up and park my scooter close by. 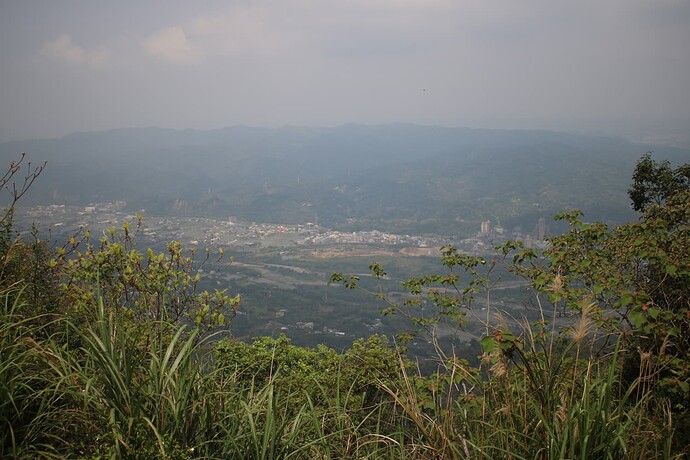 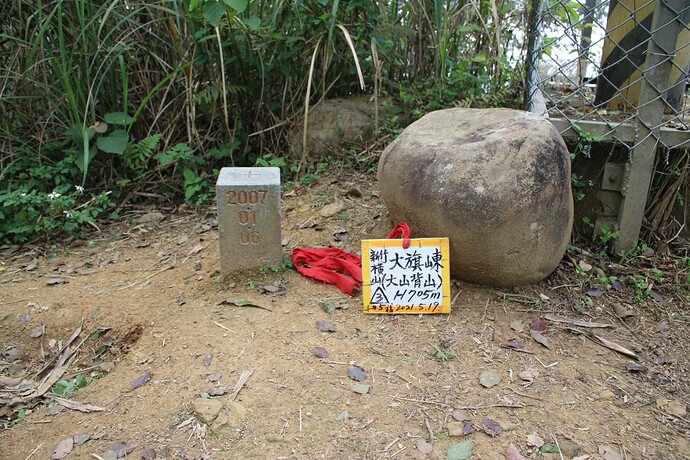 So on Sunday I got up at 05:30 and after packing some sandwiches I mounted my scooter, which covered the 37 kilometers to the summit in 55 minutes. When I arrived I had a bit of a surprise: an army jeep was parked behind the pagoda. Two green masts with vertical antennas mounted to it and two men in green fatigues keeping watch. Being afraid that I there was a possibility that I had to blow off my activation I inquired if they would mind me doing my thing and if there was a change we could interfere with each other. Luckily they were just a portable air force VHF repeater system set up for the day and they only used the lower part of the VHF band, so no conflicts there. 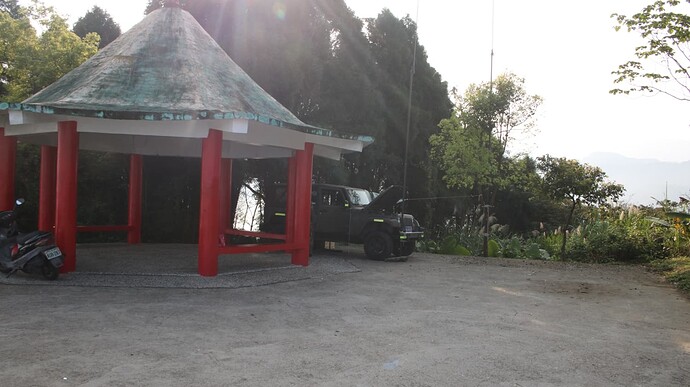 Setting up after that was quick and easy and by 07:30 I made my first QSO, which was the first S2S one of the day. Many more followed. 15 meters was the hot band and I stayed there most of the morning. I had some problems with BU2EQ being only 5 kilometers and a few kiloHertz away, but he luckily he didn’t operate CW all the time, dividing his attention between CW, SSB and FT8. BX2AI, who was a bit farther away, was coming in very strong but not wreaking any havoc to the front-end of my KX3. I alternated between calling CQ and chasing other SOTA stations, mostly staying on 15 meters. When calling CQ I did experience some pile-ups and didn’t really know how to handle them. I might have missed some nice DX calls because of my inexperience, but that’s life. 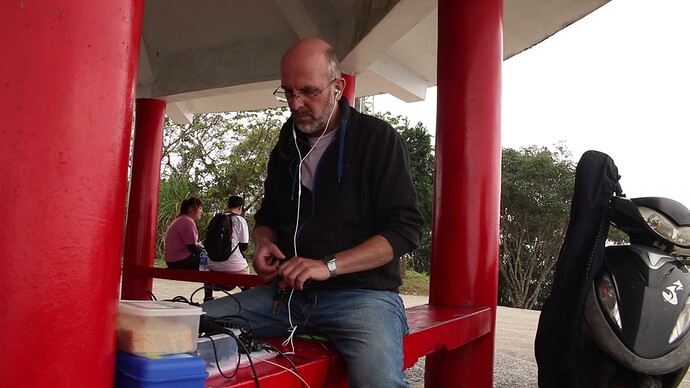 I also brought my new HT - a LanchonLH HG-UV98 with build in GPS, Bluetooth and APRS - and an Arrow 3-element yagi and I had 8 QSOs on 2 meters FM with local OMs. With the Arrow, 5 Watts and being 705 meters ASL it was easy to cover the 55 kilometers to Taipei. I got some nice reactions in our local chat group later on and it is good to see that a SOTA activation can bring people back to VHF, which is largely underused here in Taiwan, except for unlicenced taxis and truckers. 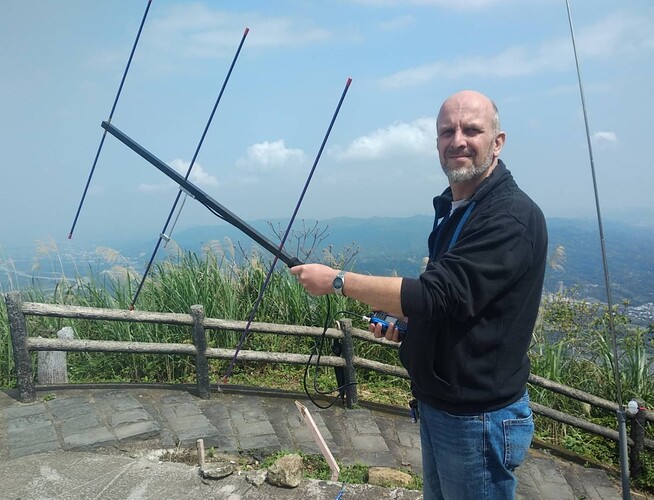 In the end the military guys turned out to be really nice. They were army, but deployed to the air force to handle communications. One knew a lot about amateur radio and we all agreed that the local situation in Taiwan is messy, to say the least. They gave me some army food which was pretty good and I brewed coffee for them. Advantage of riding up most of a mountain is that you can bring your Bialetti Moka Express and a small camping stove. For me SOTA is about being outdoors and enjoying life and this fitted right in. Nothing better than enjoying a fresh brew while enjoying some nice - albeit hazy - scenery. 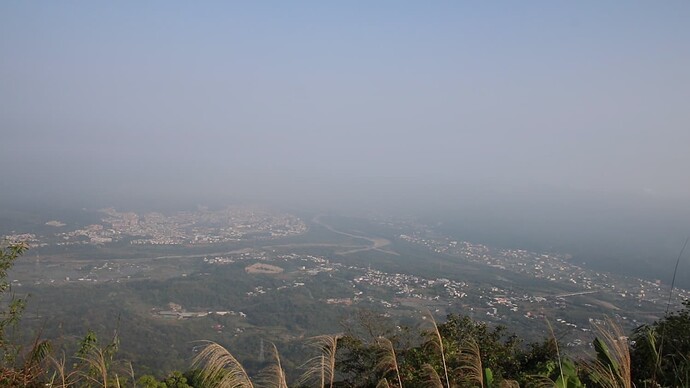 But in the beginning of the afternoon I was getting tired and it was getting busy as well, so time to break up and head for home. It was kind of disappointing that I didn’t work any VK stations and only two chasers from north America, but with 31 QSOs in total, of which 15 were S2S, I was still very much satisfied.

Another 37 kilometers back on my scooter, but this time it took a little longer due to a short stop at a McDonald’s to enjoy a well deserved ice cream. What a wonderful, enjoyable and relaxing day. And all because of the excellent idea to hold a JA SOTA QSO party. I hope we can do it again, soon. 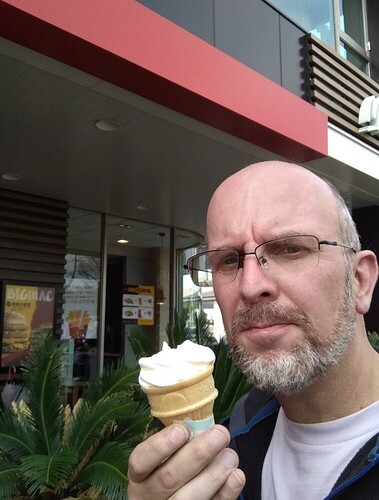 Hi Hans! Congrats for your successful activation.
To manage the pileups I recommend you MorseRunner. Terrific simulator!