Last Monday (Feb 28) was a national holiday here in Taiwan and the end of a sunny weekend, the first in over a month. It was time for my second SOTA activation. I haven’t been mountain hiking in Taiwan for over 25 years, and being out of shape I chose an easy one: BV/NT-045, Yuan Shan, a one pointer. At first I wanted to do an FM 2 meter activation only, but since it was a national holiday I suspected that there would not be many people at home to answer my CQ. The Taiwanese really like to go out and about, that’s one of their many traits. So I also packed my not-quite-finished-but-usable DIY HF antenna and my KX3 plus paraphernalia. I aim was for just a quick test to learn the ropes of setting up my portable station. 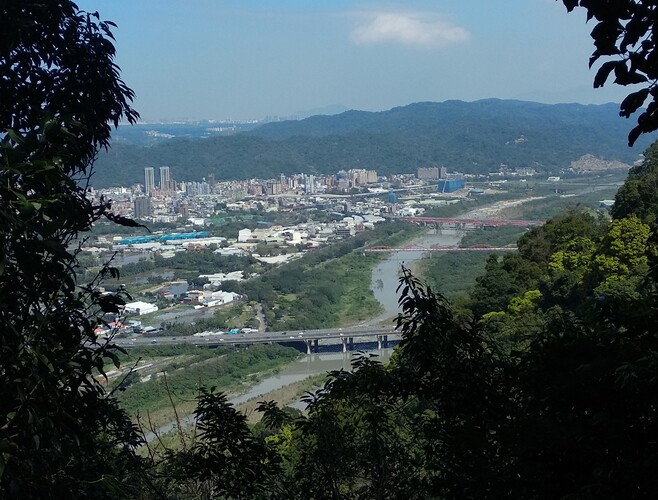 Yuan Shan turned out to be a lot harder to climb than I thought, the path up being steep and not well paved. It took me over an hour in the end. At the top I first tried 2 meters and indeed not many people around and the ones that were didn’t come in well or at all. So I set up my HF station and had a difficult SSB QSO with BU2EQ on 20 meters. But I knew from asking JG0AWE that 15 meters towards Japan would be open around noon and so I switched to there. First two local QSOs with BU2EP and BU2EQ and then I finally had my first international SOTA QSO with JH1MXV. 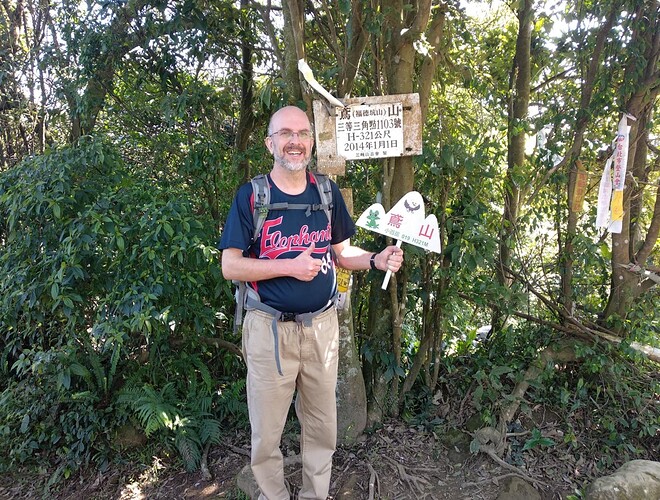 Having fun makes you hungry and it was already after 1 p.m. and I hadn’t eaten yet. But unbeknown to me BU2EQ had spotted me on SOTAwatch and he IMed me that New Zealand was calling me. Luckily you can do CW with your mouth full, so I had a sandwich during my QSO with ZL1TM. I was ill prepared, because I didn’t have paper and pen ready, so I had to do all the CW in my head anyway. So my second SOTA QSO was with another continent. Could it get any better? 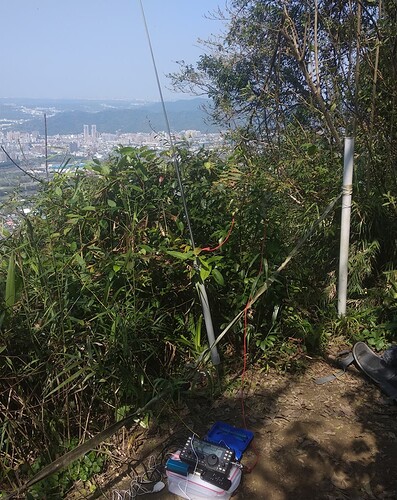 Oh yes, it did get better. After two QSOs with Japanese chasers JA5QJX/0 and JF1NDT, my first S2S QSO with JS1IFK/1 who was activating JA/KN-020. Quite something to have your first SOTA HF activation and working a DX station plus an S2S station in one go.

I finished my lunch and had two more local 15m groundwave QSOs with BX2AG and BX2AN before packing up an heading home. I was happy with the test, finding a lot of things to improve so that next time I can operate even more relaxed than this first time.

It was only after I got home when the anticlimax came: I couldn’t find my trusty Kenwood TH-F7e HT. Gone! The only HT I had, my first ever transceiver that I got when I passed my novice licence in 2009. My workhorse, always by my side. I must have put it on the ground or placed it in the grass and forgot to pack it up when I left. My own fault, nobody to blame but me, and the heartbreak hurts extra because of that.

I went back the next day, via an alternative shorter path and it took me 45 minutes to get to the top then. The Taiwanese are friendly people and my hope was that they would have just left the HT where it was, or put it in a safer place. Unfortunately that was not the case. I have already been to the local police and no found items have been reported in the last few days, so I now have to live with the realization that I have forever parted with my beloved Kenwood. But you live and learn and after this second SOTA activation I have a whole list of things to improve not related to the radio ops. First thing on my list: get sturdy stickers with my telephone number on it to put on everything I take with me.

To end on a positive note: I climbed the same mountain twice in two days, improved my health with that and met a lot of nice people on the way.

I’m sorry to know about the loss of your handheld. I own the same one and it did happen to me something similar after one activation. I spend some time walking back and by chance I found it fallen on a grassy slope; what a luck!
This VHF handheld is a keeper, perhaps you can find something on sale there to replace it; a handheld is always useful in the mountain.

Thanks for the report and looking forward your next one.
73 de Ignacio

Firstly, thank you for the wonderful report from a country I’m sure we’d all like to hear more reports from.
Sorry to hear about losing your handheld. As a species humans are very curious with our attachment to inanimate objects. I, as most of us do, suffer from the same condition. In this situation, however, you are right to focus on the benefits you have received from your SOTA outing. You can replace a HT, but your health is always more precious.

Hans. Sounds like a great activation except for losing ur ht. I always look over my activation spot to see if I’ve left anything. But I did leave a pair of gloves once.

Hans,
What a great activation. But really sad about the HH. I’ve had my squid pole fall out of my pack but found it a hundred metres down the hill and once left one in situ!

I think after a good activation your attention can wander and it can be easy to lose stuff. I have a hard time with anything coloured black. It blends into any background. I hope you can get a good replacement HH.

I work plenty of BV stations on FT8 so with improving propagation maybe a CW QSO with you is possible.

Thank you all for the comments. A ham buddy has already arranged another HT for me to take on SOTA trips, but it is no fancy Kenwood, for sure. Looking for another TH-F7e will have to wait. Just had a huge car repair, the washing machine needs to be replaced and then there’s still the mortgage, and loans we had to take to get through the pandemic lock down. Maybe next year.

Luckily I already had the rest of the SOTA things in my possession, except for good shoes, which were not cheap, but very necessary, and they are waterproof so can double as rain shoes when I ride my scooter in rainy weather. As long as they last for years it will have been a good purchase.

But to be honest: I never really liked working portable (or traveling for that matter). I don’t like the stress of packing and not forgetting anything essential, then finding everything is essential and packing to heavily… Not knowing how to best get to the location and if it is suitable at all … Then hoping that everything works and staying focused on decoding CW, totally forgetting that you’re supposed to enjoy and relax yourself, because you’re out in nature on your day off… It’s basically not my cup of tea.

But…I’ll have to. Operating at home is no joy with all the power line noise, I need to exercise more (says the doctor) and even though I’ve been living in Taiwan since 1992 and haven’t even experienced 10% of it. My teenage children laugh in my face, because they have seen so much of Taiwan in their young lives (thanks to their monthly school excursions) that it will take me more than two decades to catch up.

It’ll be fine, in a while. I’m a man who enjoys routine and once I develop the routine of packing and unpacking, setting up and tearing down, giving everything its place, then I’ll be fine and can truly enjoy myself up on a summit. Until then I’m still crying a little over my lost Kenwood HT.

Next weekend another opportunity, so let’s see what will happen then. I will be looking out for CW signals from VK for sure. 73 de Hans

Hi Hans,
First of all, thanks for the SOTA activation report and your efforts about compiling SOTA BV association reference manual (the draft has been prepared, the final will be done soon). And I am sorry about your HT lost, it’s indeed a nice kenwood HT (F7/F6).
In terms of “stress of packing”, I think it’s the art of SOTA

. For my case, once my kx-2 set is organized ready (in a protection go-box), it’s a simple grab-and-go task. Only one thing I need to worry about is whether the kx-2 internal battery is ok.

Enjoy the fun of SOTA activation.