I was going to write about what a good day I had on Birks Fell G/NP-031 yesterday and then I was lucky enough to get out again today. And what a day! 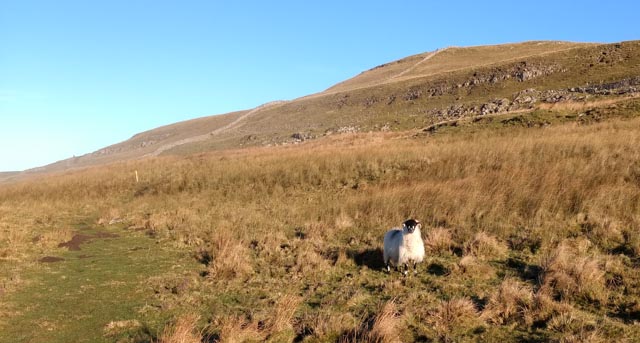 I had originally alerted for Rombalds Moor G/NP-028 but then my wife decided to work from home so I could use the car. I decided on Buckden Pike and parked in Starbotton in exactly the same spot as I did for Birks Fell yesterday. This meant the walk to the top was longer than it has to be but I like some variety and to make a proper walk of an activation. At the start the weather was pretty good but as I ascended I came into some cloud - I could see it working its way down the valley. I was soon above it though. I spent my two hours on the summit above the cloud, looking down into a sea of fog. I’d assumed it would burn off but it actually got thicker. 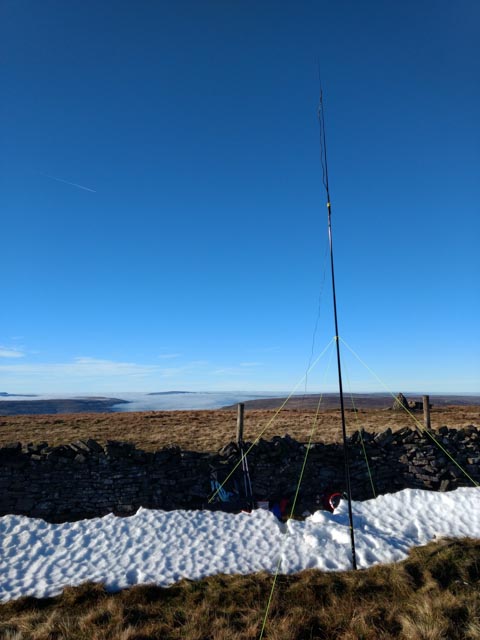 As usual I started on 40m CW and my first two calls were S2S into Switzerland which was a nice start. Plenty of regular chasers, some with very strong signals. Conditions do seem to be improving. 20m was another story. I only managed 4 QSOs but I think perhaps there was a lot of QRM. It seems that however long you listen on a frequency and how many times you ask if it is in use, you’ll get QRM once you are in QSO.

Then it was 2m FM which is when the fun really began. The temperature inversion causing the cloud in the valley was also generating a boost to VHF conditions. My first QSO was an S2S to GI0NCA/P on GI/SM-006. This was followed by GW4BML in mid Wales and GW4ZPL in Caernavon. Along with several local chasers I had S2S with M7BIA/P on G/SP-004, M7SDO in Shropshire, G4IGL in Leicester, GW1KGW on Anglesey and two stations near Wrexham. Finally one last S2S with G6WBS/P on Ingleborough G/NP-005. That one didn’t need special conditions as it’s line of sight. It was a bit like when I was first licensed in the 80s with every channel in use. It was only when it was too late that I remembered that channels now are 12.5kHz and all the half-channels were free. I’ll remember that next time there is a lift. If I suggested using V41 I wonder who would understand.

How the cloud below grew

As I descended I could see the bank of cloud below me. I stopped for one last time in the bright sunshine to finish my flask of tea and KitKat Chunky before entering the gloom. Those in the valley had probably thought it had been a very poor day but I had been in glorious weather the whole time. Even the wind had dropped while I had been on the summit.

EDIT: I’ve just remembered even the journey home was a bit magical. The setting sun was partially below the horizon and partially obscured by cloud leaving a bright red strip. A bit later a barn owl flew across the road.

Blue sky? Barn Owls? We have had every shade of grey sky about 10ft above your head this week.

Thank you for the 40m CW QSO today but it was a struggle to hear you. I spent some time this morning chasing and you were the only UK activator I could hear. This was on CW and SSB.

Using the RBN system, even on 40m no station in the UK picked me up, the higher bands were all skipping far away. But I can reach Wales (GW) using 80m when it gets dark.

you were the only UK activator I could hear

Imagine my surprise to hear you calling CQ from a summit I had never heard from home before! I had to look it up because I was so surprised that I was hearing you on 2m. It seems this was 183km straight line - 5w into a rooftop X50 on my side - I’m low down too. I love the way radio can be so totally surprising - some days I struggle to hear G/WB-005 at 6 miles away on VHF… Anyway, thank you for the 6pts that I totally didn’t expect and thanks for persevering to hear me - I know I was very quiet to start with and I almost gave up. Thanks for showing me what you were seeing as well.

As it happens I was then able to make contact with Shane @G6WBS/P on Ingleborough G/NP-005 - he was even stronger and clearer! So another 6pts that I didn’t expect.

It capped an amazing few days for me chasing on 2m - since the 10th Jan I’ve managed 43pts, 14 summits (two new to me!) and 7 activators. All while sat in the office at home pretending (!) to work. Thanks to the efforts of all the activators.

It shows it’s worth persevering. My 2m rig is just a Baofeng handheld into a slim jim on the 6m pole so if a signal is struggling to break the squelch it can be hard to hear. I was just catching bits of the callsign and then when you said you were going to give up I heard that loud and clear! You weren’t the only home station I worked at a good distance. I was surprised that GI0NCA/P at 339km was strong when I started on 2m and still strong when I packed up almost an hour later. I could easily have sat at the summit for longer but I didn’t fancy walking down in the fog and dark!
Perhaps it is time to consider a better 2m rig. I do have an FT817ND but that’s quite heavy (I use a homebrew rig for HF activations now).

It was working fabulously!

It may transmit well but:
a. What are the spurious like? Into the supplied whip it probably doesn’t matter but with an external antenna?
b. Receive could probably be better. Not only the way it struggles with weak signals but often received signals seem quite noisy. It could be the transmitted signal but it might be the receiver.
c. It’s probably not great in the presence of out-of-band strong signals. The last time I activated my local summit Rombalds Moor G/NP-028 I didn’t get a single QSO on 2m. There is a mast nearby so that could have been the reason I didn’t hear anything.
Perhaps on my next activation I should take the 817 and see how it compares.

Bleedin’ diabolic is the technical term for its RX performance. I’d normally suggest you sell it. But my conscience doesn’t allow that any more.

Or take off and nuke it from orbit, it’s the only way to be sure.

lucky enough to get out again today. And what a day!

Great pics… one of those rare really sunny winter days.

We have had every shade of grey sky about 10ft above your head this week.

Sun shining on the righteous? (I mis typed that as riotous first time…)

Are they now replacing cheap shots?

Are they now replacing cheap shots?

It was only in the Lake District, but I see no reason not to

Of course our sheep are much prettier than yours

Nice collection of VHF contacts. I’ve had more fun on VHF than HF on a few occasions now.