Ronald Turnbull’s “Book of the Bivvy” makes interesting reading and provides some food for thought for SOTA activating. Today I ran across an interview with him that is equally interesting.

Combining bivvying with SOTA sounds an intriguing combination - and one that I intend trying quite soon. Like Mr Turnbull, my experience of bivvying has either been very pleasant or incredibly horrible.

In reply to G3CWI:
Listening to the podcast gave me horrid flashbacks to a very cold and damp night spent in a bivvy bag on the top of Ben Cleugh, while doing the Ochil Hills Challange.
Now I have to find the book

As far as I’m concerned bivvying is what you do when things go wrong!

As far as I’m concerned bivvying is what you do when things go wrong!

And bevvying is what you do in the Cat & Fiddle after a successful activation on Shining Tor.

In reply to G3NYY:
I’ve made a note of that, I haven’t started on the Peak yet, in fact I haven’t been there since I gave up thrutching up gritstone!

What, you mean you still haven’t activated the Top Two, in the mountaineering heartland that is Cheshire???

In reply to M1EYP:
I will do them when I get my passport renewed!

What, you mean you still haven’t activated the Top Two, in the
mountaineering heartland that is Cheshire???

I’m thinking of making Shining Tor my first 2-pointer activation! (At this time of year, it’s an easy 5 points.)

New sleeping bag has arrived so it’s proof-of-concept testing tonight in the back garden. If I manage to get a reasonable night’s sleep I will have a go on a summit this weekend. I suspect it’s a technique that will need a little experimentation to get sorted out.

I’ve put a few pictures on Flickr to inspire you: 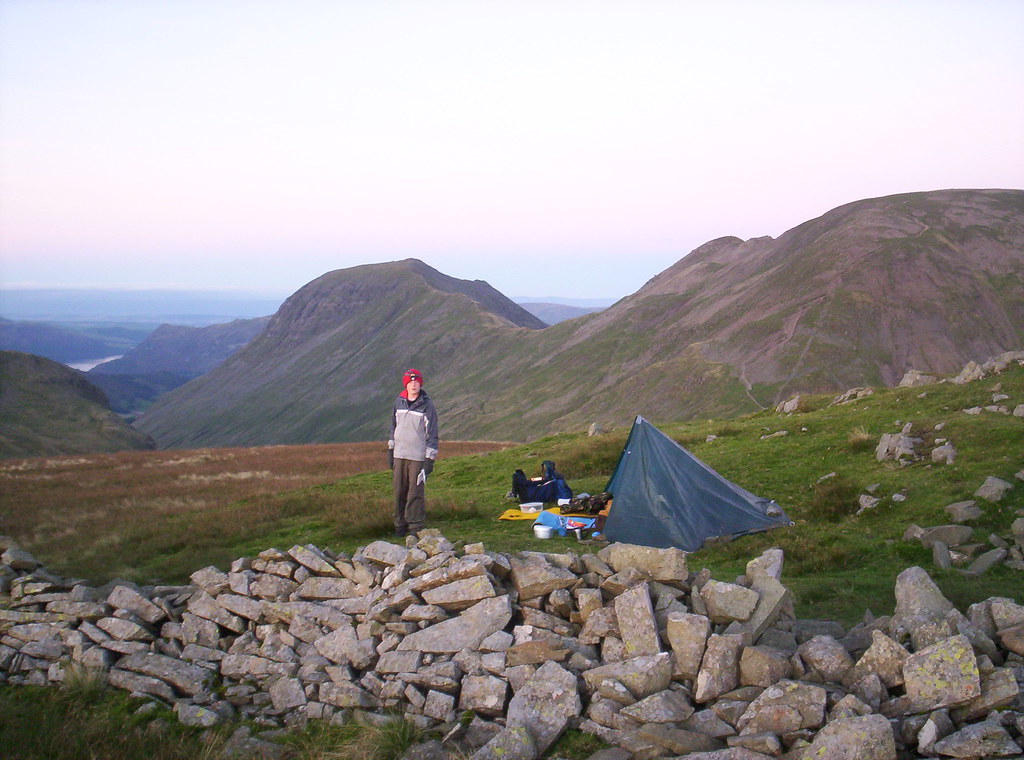 I don’t know where you think I live, but all the NW summits you mention are much more distant than Shining Tor!

Of the others, the only one comparable in “ease” to Shining Tor is WB-005, and indeed I’m considering that as an alternative first 2-pointer.

As for MW-013, it involves 567 ft of ascent in 0.65 mile from the parking spot. Not “easy” in my book, although admittedly it’s hardly mountaineering.
(Perhaps comparable with Worcestershire Beacon, which I have already done.)
Shining Tor involves an ascent on foot of a mere 192 ft in 1 mile.

Shining Tor is a 2-hour drive from my home QTH.

Walt, WB-003 Stiperstones from the car park on the SE side is a doddle, good easy angled track (push the cows out of the way!) and not much more than 10 minutes to the AZ with a uniquely sheltered nook below the trig point to operate from, definately worth putting high on your list and a great pairing with WB-005 for an easy ten points on a fine winters day! WB-005 has a motorable dirt track to the col a couple of hundred metres north of the trig point, with a nearby wooden post that you can duct tape a roach pole to, but most people would park by the tarmac road to add just another couple of hundred metres to the walk. The two summits are linked by a lovely drive through the hills, perhaps 15 - 20 minutes on very quiet roads.

Thanks for the photos Rick. Inspiring indeed.

It’s been many years since I spent a night in my bivvy bag - a Goretex one bought from Cotwold Camping in 1985(?). As mentioned before, my results have been mixed. At various times I have been very cold and very wet in my bivvy bag. Cold because I have used it in winter with an inadequate lightweight down bag and wet because in wet weather it is impossible to dry out or even keep dry in heavy rain in a bivvy bag. Thus with some minor trepidation I plodded out across the lawn at 2130 last night. The set-up was: thin closed-cell foam sheet (laminate floor underlay - brilliant stuff). Mid length Thermarest, Goretex bivvy bag and Snugpak Chrysalis Winter synthetic bag. Shoes were placed in a plastic bag by the side of the bivvy. Everything was done using the red torch bulb which gives plenty of light for such tasks with minimal current drain.

The night was calm and overcast. The grass was wet. I had not checked the forecast so I had no idea what I was in store for. I had warned my wife that if it was too horrible I would come back to bed. Strangely this did not elicit a sympathetic reply.

I climbed in and zipped up. It was very cosy. Five minutes later I was getting hot, ten minutes later and I was unzipping the bivvy bag and sleeping bag. To keep anything like cool enough I had to adopt a position with my head completely outside the bivvy bag. Even then I was a bit hot. It was odd lying there with a slight breeze on my face looking up at the night sky. I was comfortable and warm - but had a problem getting to sleep. As the time ticked by, the sky cleared and I fumbled about to find my glasses and spent a happy ten minutes admiring what stars were visible given the light pollution round here. Very nice.

Glasses off again, I soon fell asleep to the sounds of traffic and mysterious unidentified noises. We have foxes and badgers in our garden… The foxes must have been my last thought as I fell asleep because I woke later having had a vivid dream about being attacked by a fox in my bivvy bag - not good. The breeze was stronger now.

As I lay there drifting off to sleep I was again woken. This time by a pigeon that had been disturbed by something in the tree above. A great clattering and flapping followed which woke up numerous other roosting birds. At that point I found I had a small slug on my face. Turnbull talks about interacting with the environment - seemed like it was interacting with me.

By now I was cool enough to retire inside the bag. …and the next thing knew was that it was light. I was warm and comfortable and had survived the night. I never had to fully zip either the bivvy bag or the sleeping bag. I emerged from the bivvy bag and glanced at my watch, 7:52. I had overslept. My wife watched from inside while eating her breakfast as I fully emerged, picked up my “camp” and trudged back inside to a bemused welcome from wife and children. “Weird” according to my son.

The local weather station (Woodford) showed a low of only 6.5c so it was a warm night. Not a very severe test. Radio operating would be quite possible in the hood of the bivvy so that’s the next test. That will have to be on a summit of course.

I agree with Lewis - weird. As you know, I am looking to further my backpacking activities, but I can assure you this will not involve my head outside anything or a slug on my face.

OK then Walt, sort of between you and Shining Tor but off to the left! Corndon Hill might be steeper than Shining Tor (not much though if you take the slightly longer route), but it is a lot quicker to gain the summit from the road. As for Long Mynd-Pole Bank, that is not in the same difficulty league as Shining Tor at all. OK, Shining Tor is not difficult whatsoever, but WB-005 is a five minute (if that) walk along an almost flat path from the closest parking spot. Shining Tor is about 25/30 minutes.

I had to chuckle at you being woken by the local wildlife! It brought back memories: thirty-odd years ago I backpacked the Welsh 14 3,000’s, travelling by train to Llanfairfechan and following the landrover track to Drum before following the main ridge line of the Carnedds. I pitched my backpacking tent the first night on a nice flat grass patch on the col between Carnedds Llewellyn and Daffydd, cooked my evening meal on an army-style solid fuel stove, watched the sun set over the Glyders and went to bed - but not to sleep! It was the sheep, they kept coming up to crop the grass by the tent, and I hadn’t realised until then what noisy eaters they are! Crunch, crunch, crunch all night, and even shouting “MINT SAUCE” failed to silence them! I was more tired the next morning than when I went to bed.

The FT817 was beyond wildest dreams then, but it would have added a new dimension to the trip, so I offer the anecdote now hoping that somebody will take it as a challenge: backpack the 14 3,000’s for SOTA!

This was actually something being planned by Shirley MW0YLS before she was unexpectedly taken ill. I had toyed with the idea of joining her for the trip, until she mentioned to me that crossing Crib Goch was necessary, as it was one of the 14! I immediately withdrew my interest!

I find this quite a challenge to watch - even from the safety of my desk.

Can’t help wondering whether the cameraman looked at his feet whilst filming this.

Crib Goch needs little in the way of technical skill, even on the “Crazy Pinnacle” the holds are huge, but it is definately not the place for those with no head for heights! It can also get pretty crowded, and I don’t know if things have changed but there were always school and outdoor centre parties doing it against the flow and creating chaos at the bottlenecks. Get a bit more fitness and I’m doing that again, it’s terrific, just such a shame that it isn’t a Marilyn!

Thanks, Rick, I’ve bookmarked that, it’s nearly as big a thrill as doing it! I was very surprised to see them go around the pinnacles on the left near the end. For me the proper way is to go right, above the drop into Crazy Pinnacle Gully, and then straight up to the top of the pinnacle with the exposure tugging at your back, but if you have a video camera strapped to your head then I suppose a bit more care is necessary!

No, I don’t suppose he needed to look at his feet, you suss out where you are going to place your feet as you approach, I would only look down if the foothold shifted under my weight!

Thanks again, I’m going to view it again now!

PS Tom, most people don’t tight-rope walk along the crest like that, for most of the way there is a ledgeway down on the left and you can use the crest as a handrail!